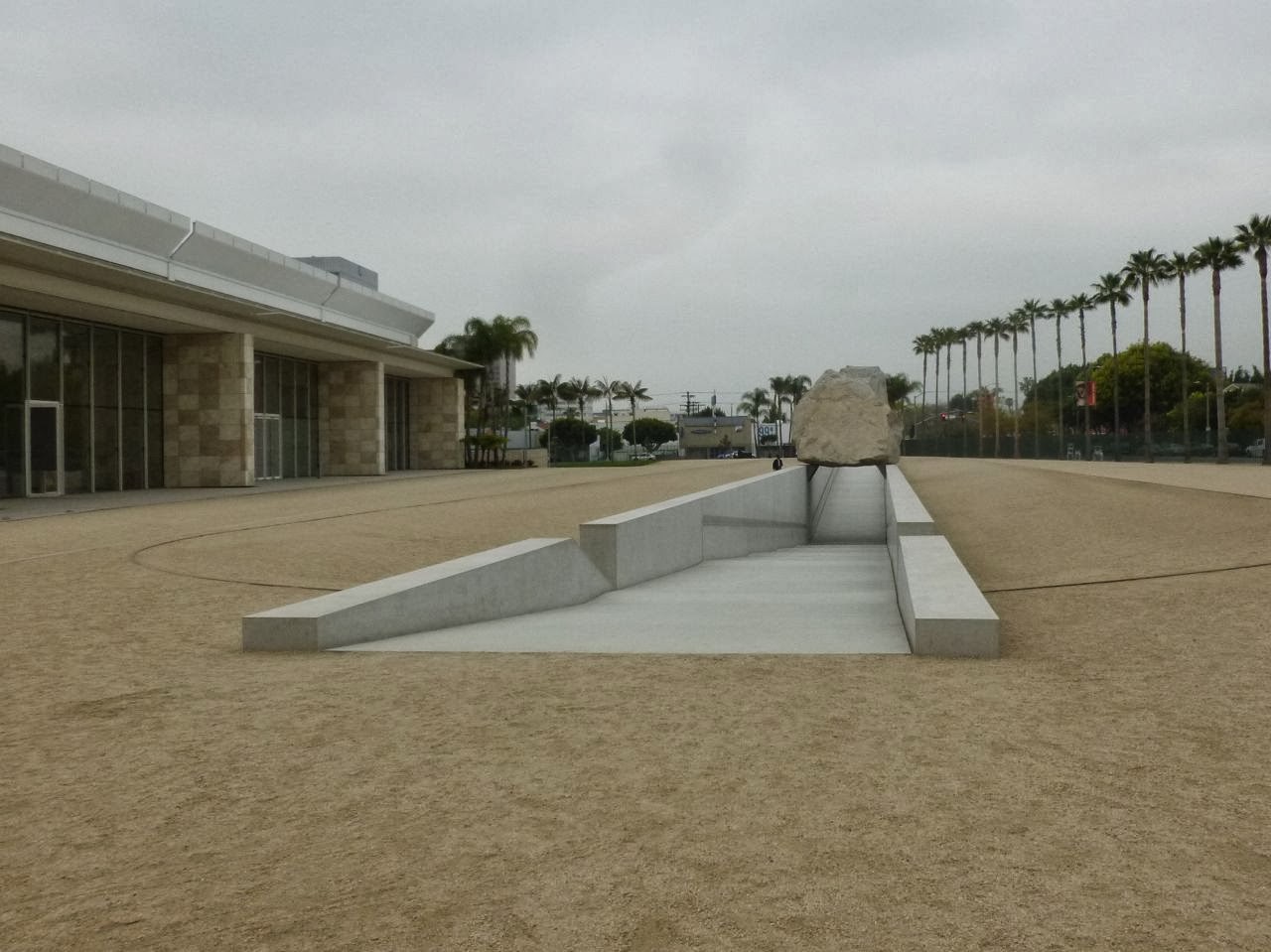 March 2013 my wife, kids, and I spent three days back in Los Angeles on a little vacation. We stayed in Hollywood and saw the Los Angeles Zoo, the Hollywood Sign, the sights along Hollywood Blvd, downtown Los Angeles, the Space Shuttle Endeavour, the Griffith Observatory. Here's a link to the complete list.

Our third, after checking out of our hotel, we drove over to see Michael Heizer's outdoor sculpture Levitated Mass at the Los Angeles County Museum of Art (LACMA). 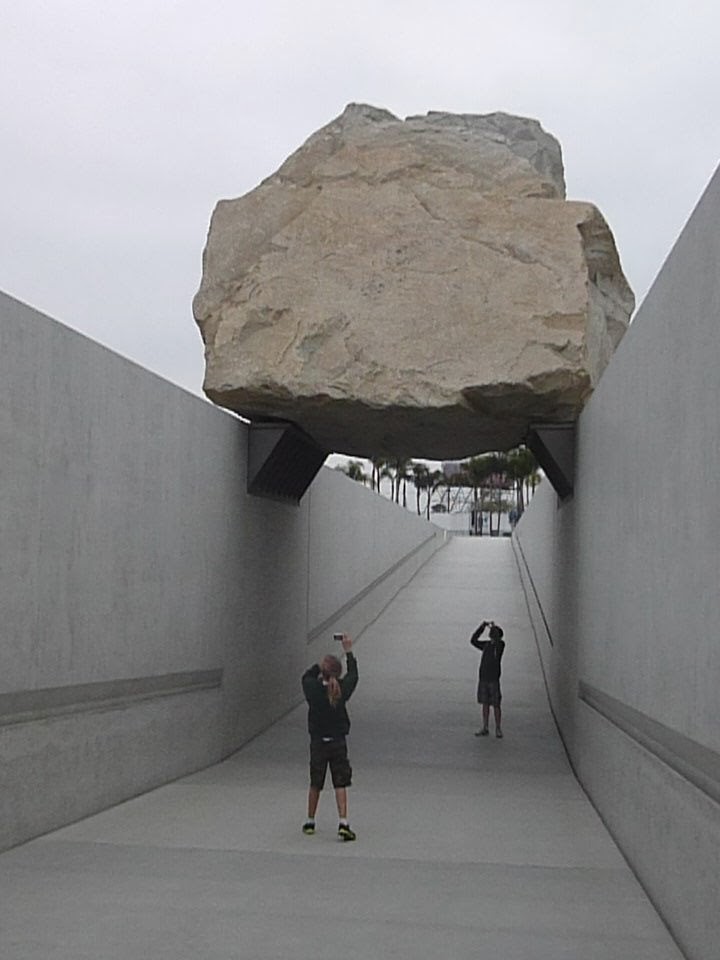 Levitated Mass is a 340 ton boulder that is "levitated" (sort of, not really) in space. 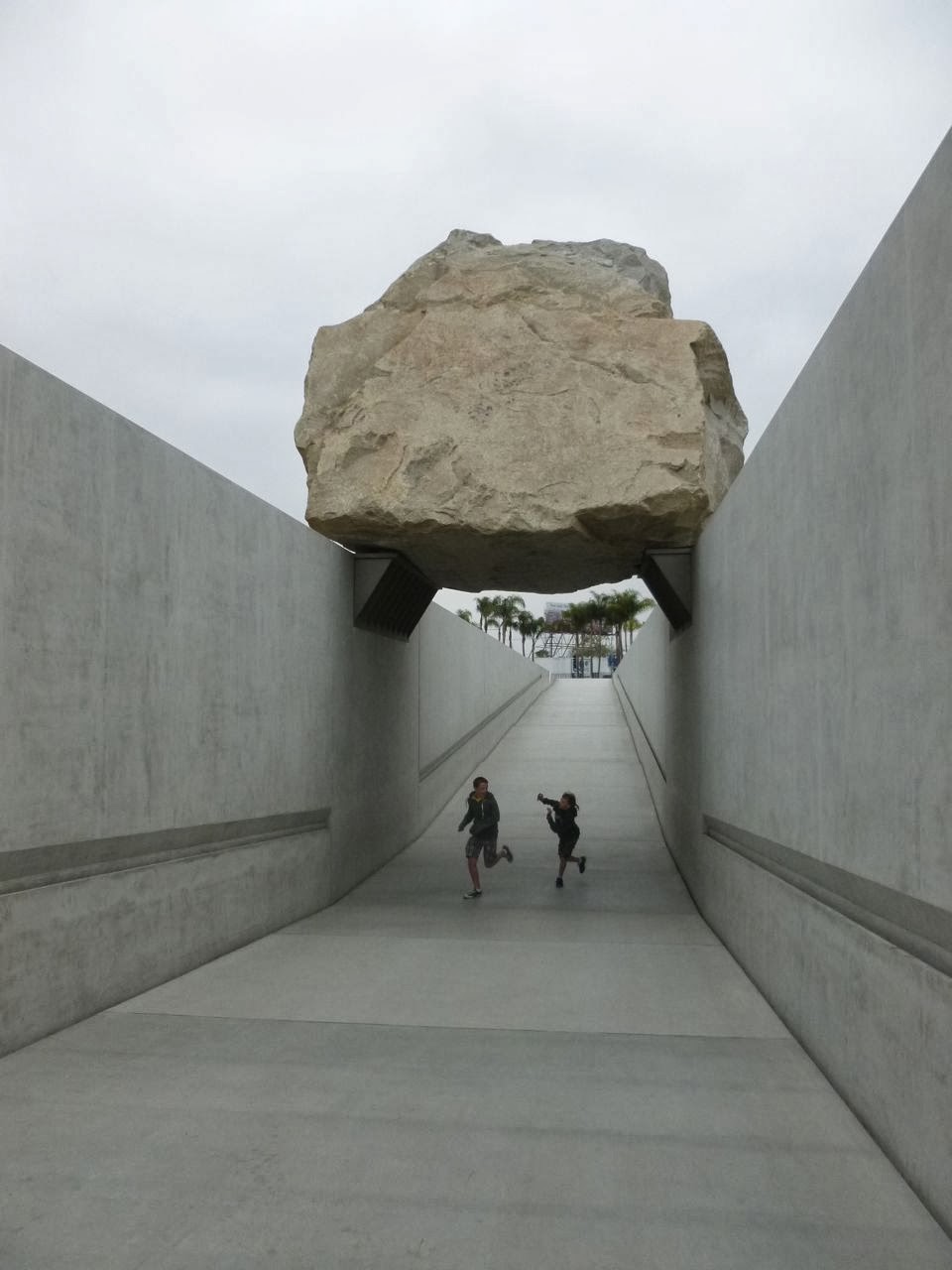 When I first heard about it, I wasn't a big fan. Compared to, say, Cloud Gate in Chicago's Millennium Park (which is incredible) - Levitated Mass is just a big rock. Here's a link to a post from Fall 2012, including what I thought about it then. 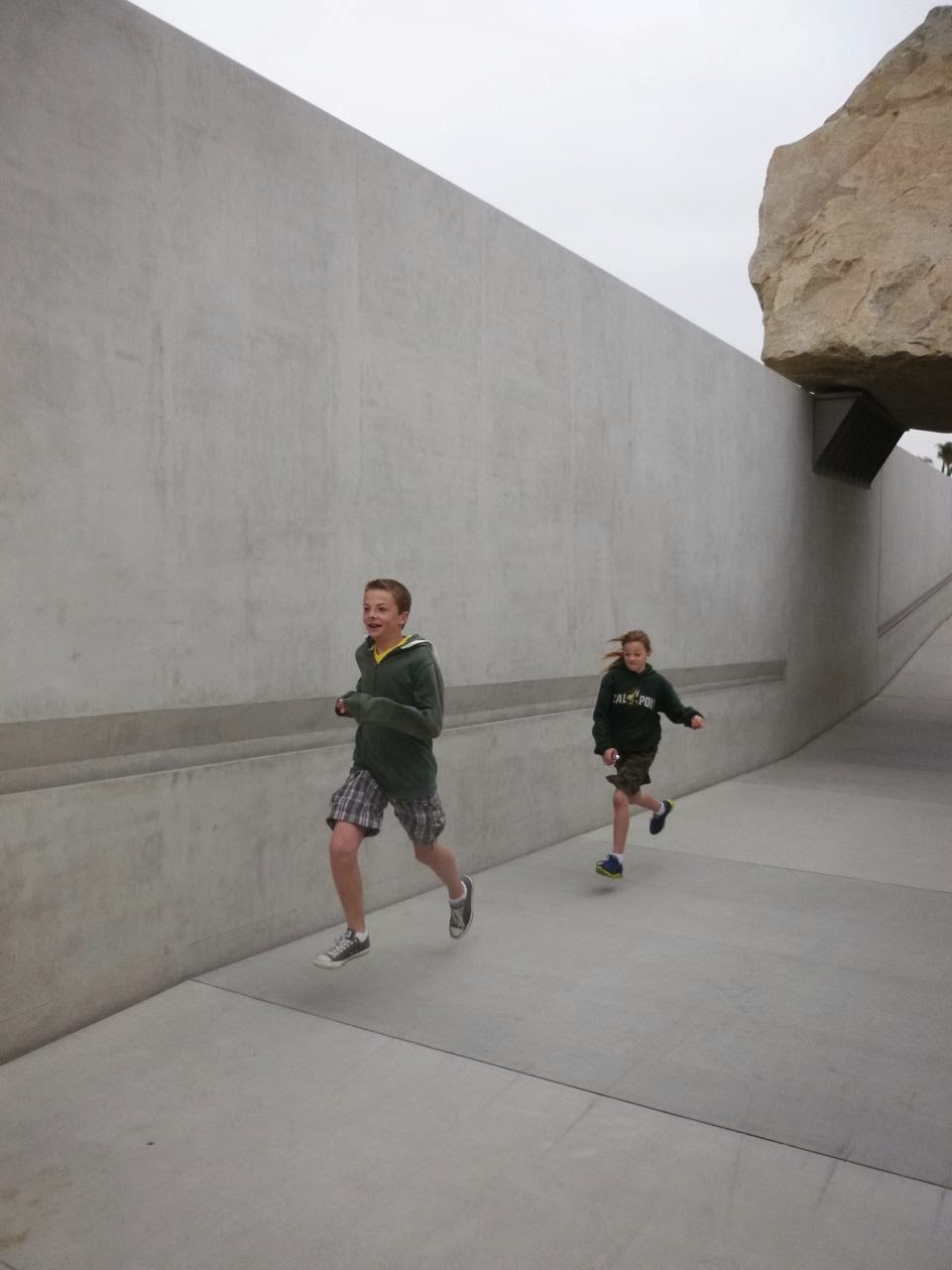 Seeing it with my kids = totally different experience. I took off the "art critic" hat and put on the "dad" hat.

My kids loved just running around, through the long trench, and under the massive boulder. 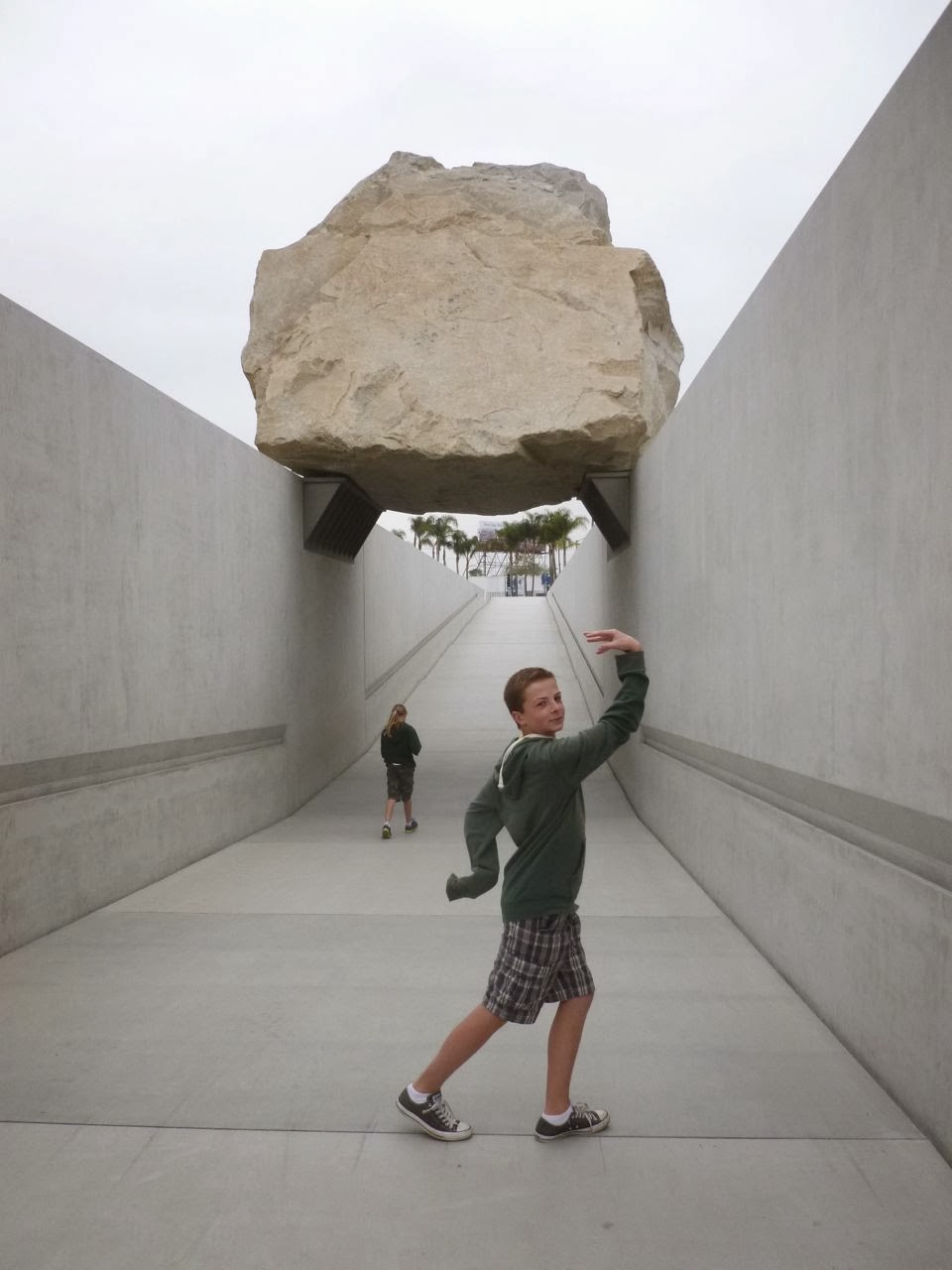 I love how the good people at 365 Los Angeles (great blog listing 365 diferent things to see and do in Los Angeles) described it: "Some rich folks pay millions of dollars for a rock the size of a marble. I say, why not get the most bang for your buck? LACMA got the most show for the dough by securing the Levitated Mass, a 10 million dollar, 340 ton granite boulder, which sits upon a 456-foot-long slot."

Love that: "most show for the dough." 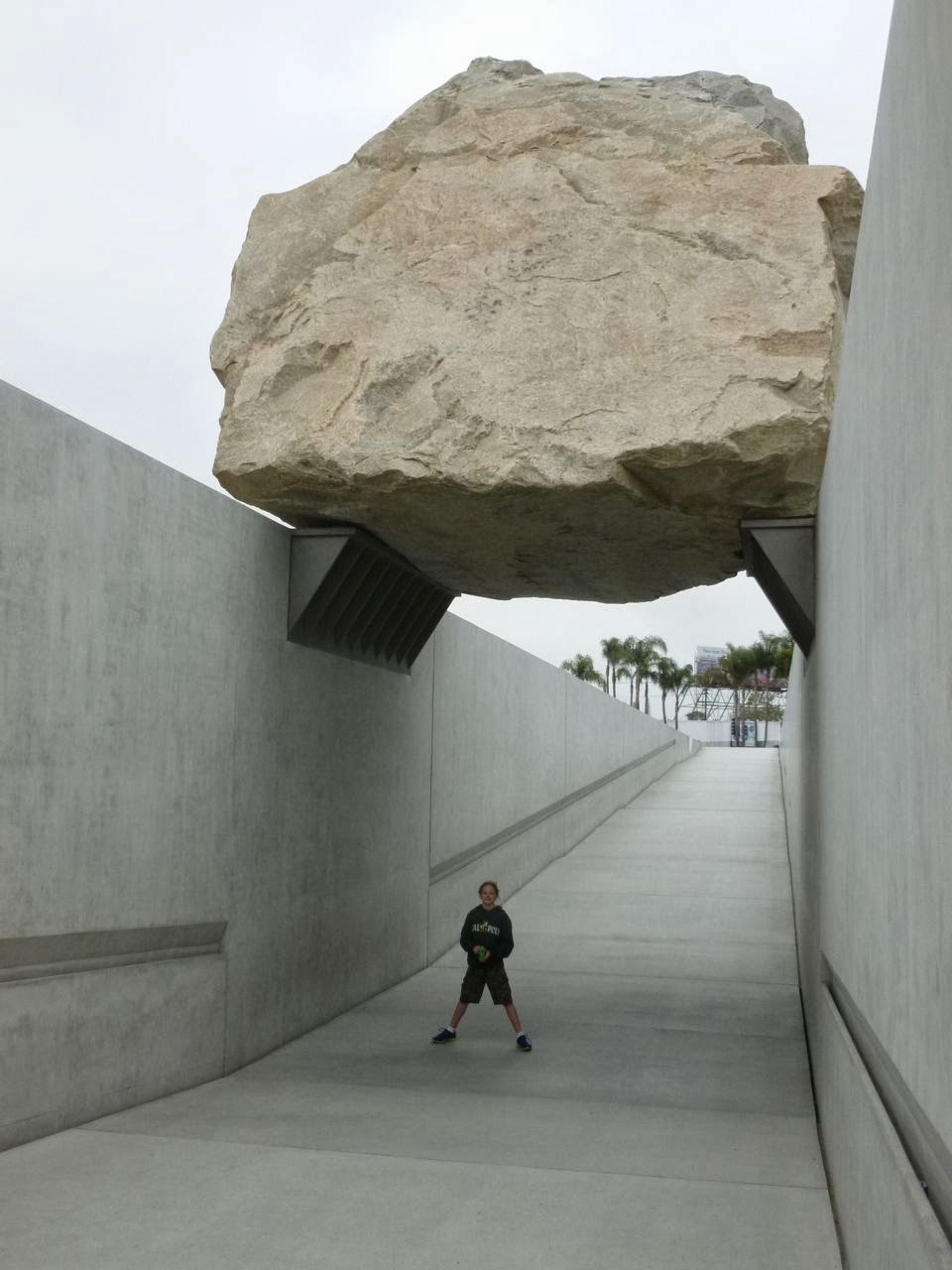 Obligatory "posting under the rock" pic. 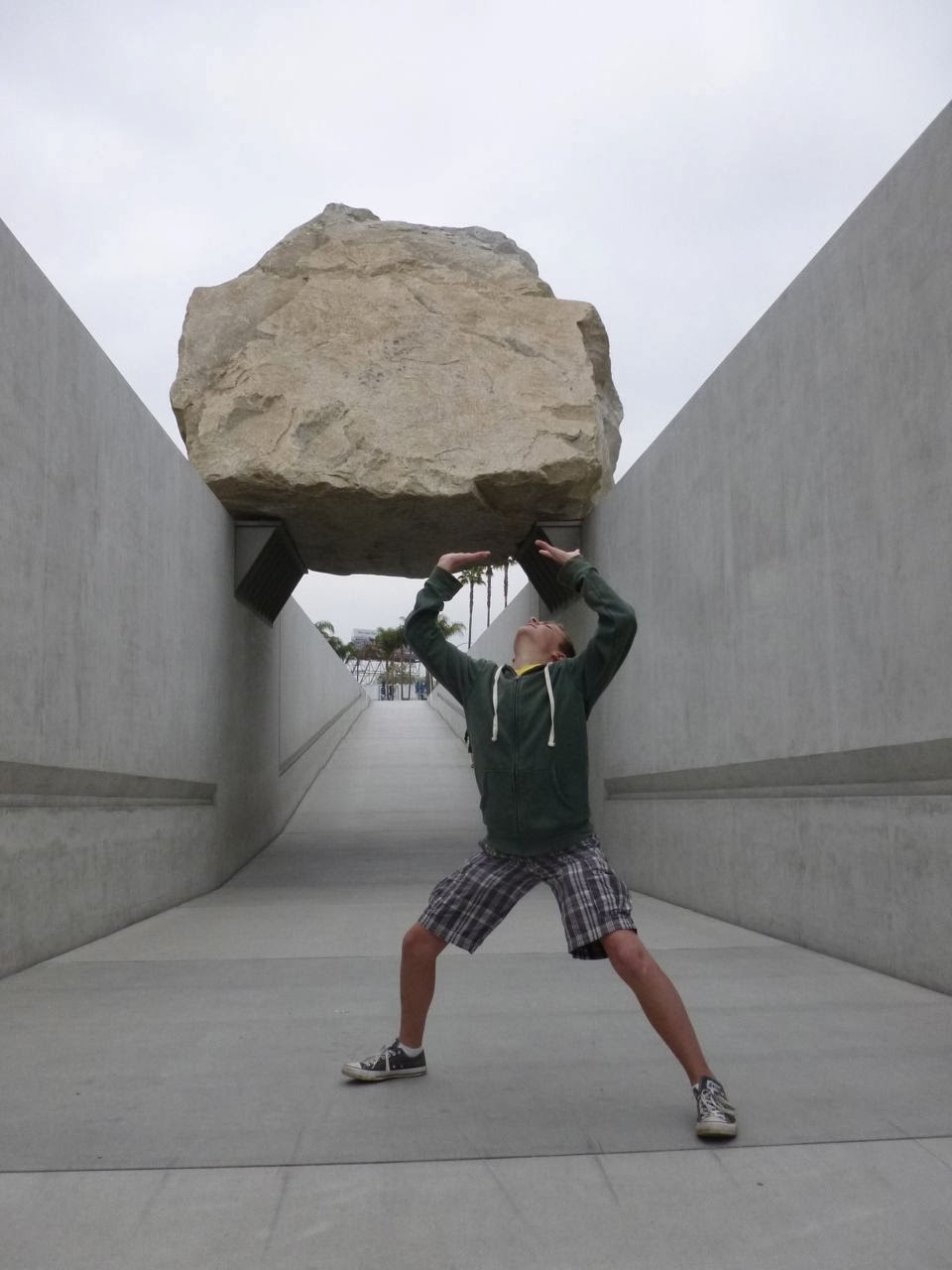 Obligatory "holding up the rock" pic. 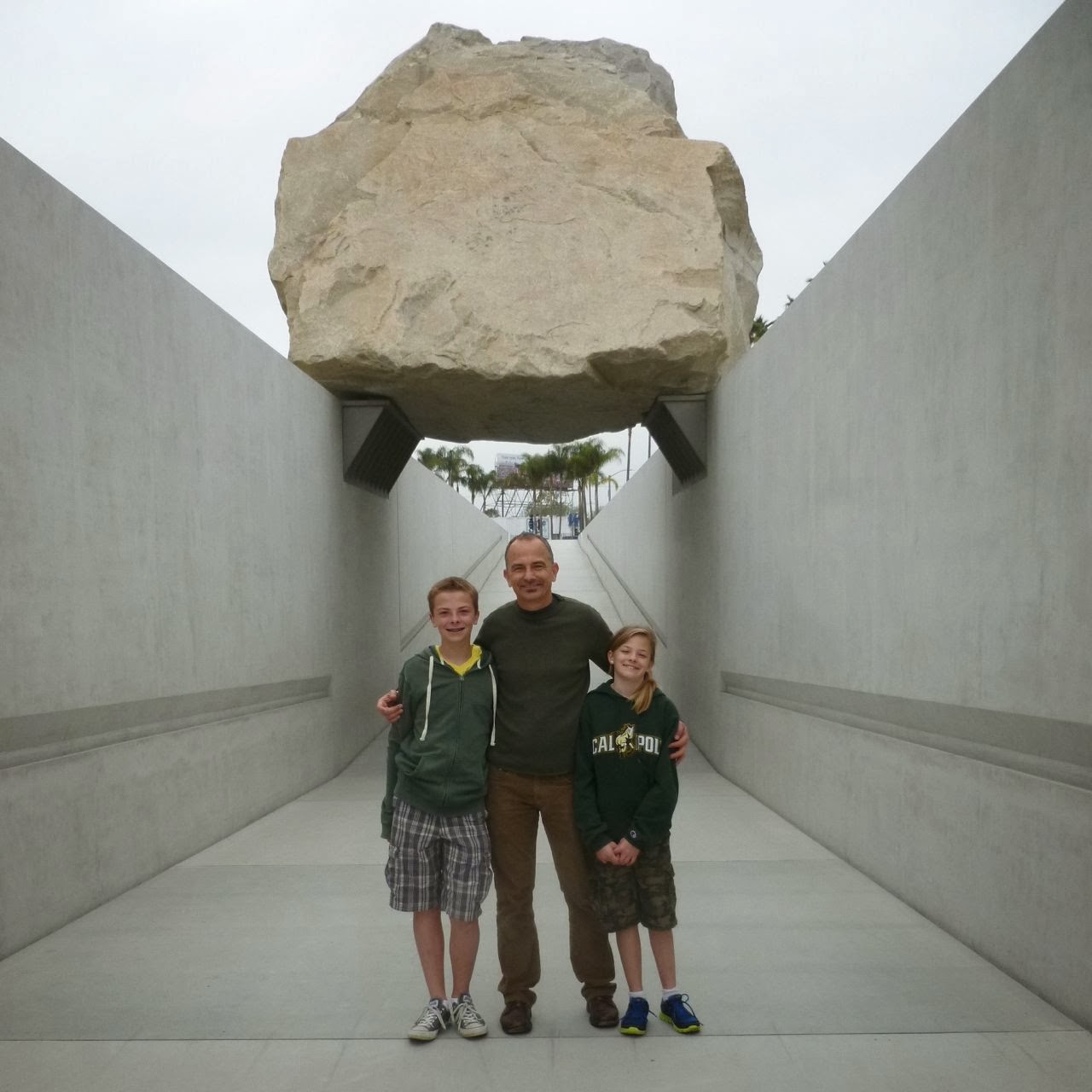 We first moved to L.A. when my kids were only 3 1/2 and 6, and spent the next five years living there. Nice to be back to see a few of our old haunts, and see things we never got around to when we lived there.

When my kids were little, I thought they'd be around forever. Time goes by quickly. To any other parents out there, be sure and spend time with your kids! 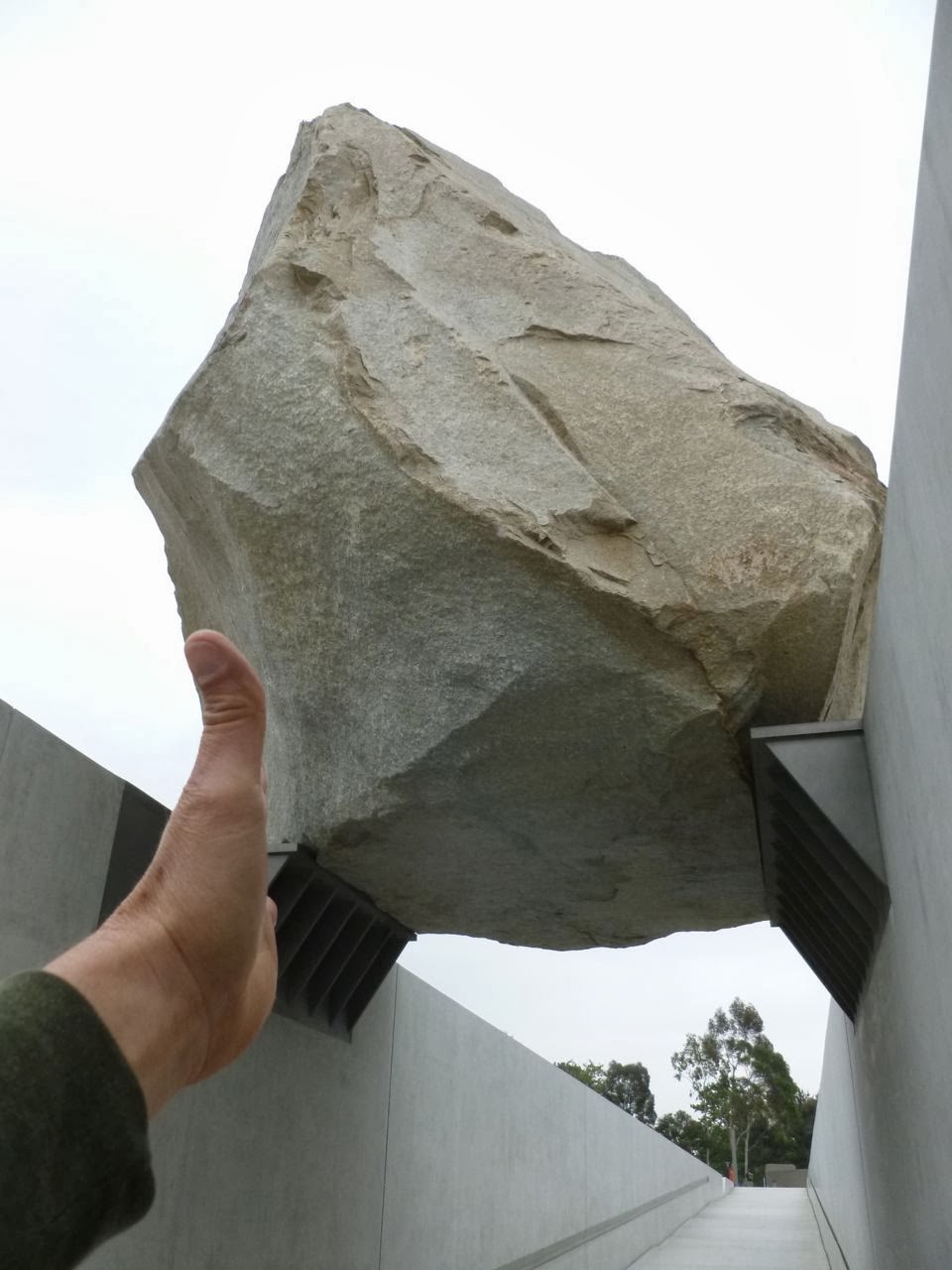 Apparently, Levitated Mass is designed to last 3500 years. Which seems like an eternity. But in light of eternity (and, yes, there is an eternity) it's the blink of an eye.

By the way, if you're in L.A. and your looking for small, "sparkley" rocks - try either Rodeo Drive - or the impressive gem display at the Los Angeles County Natural History Museum. 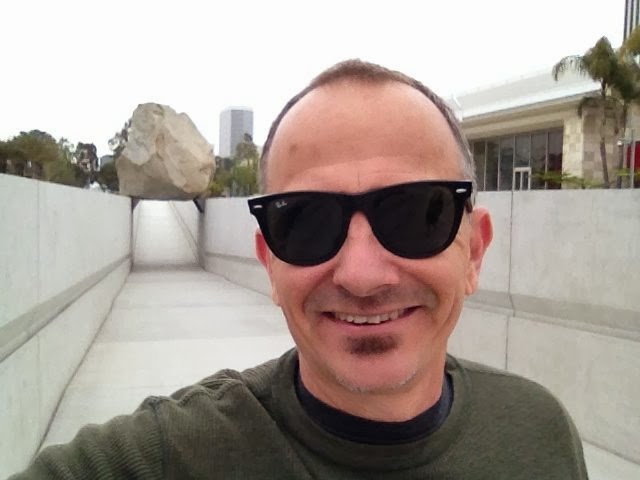 One of the few selfies I took on our trip. 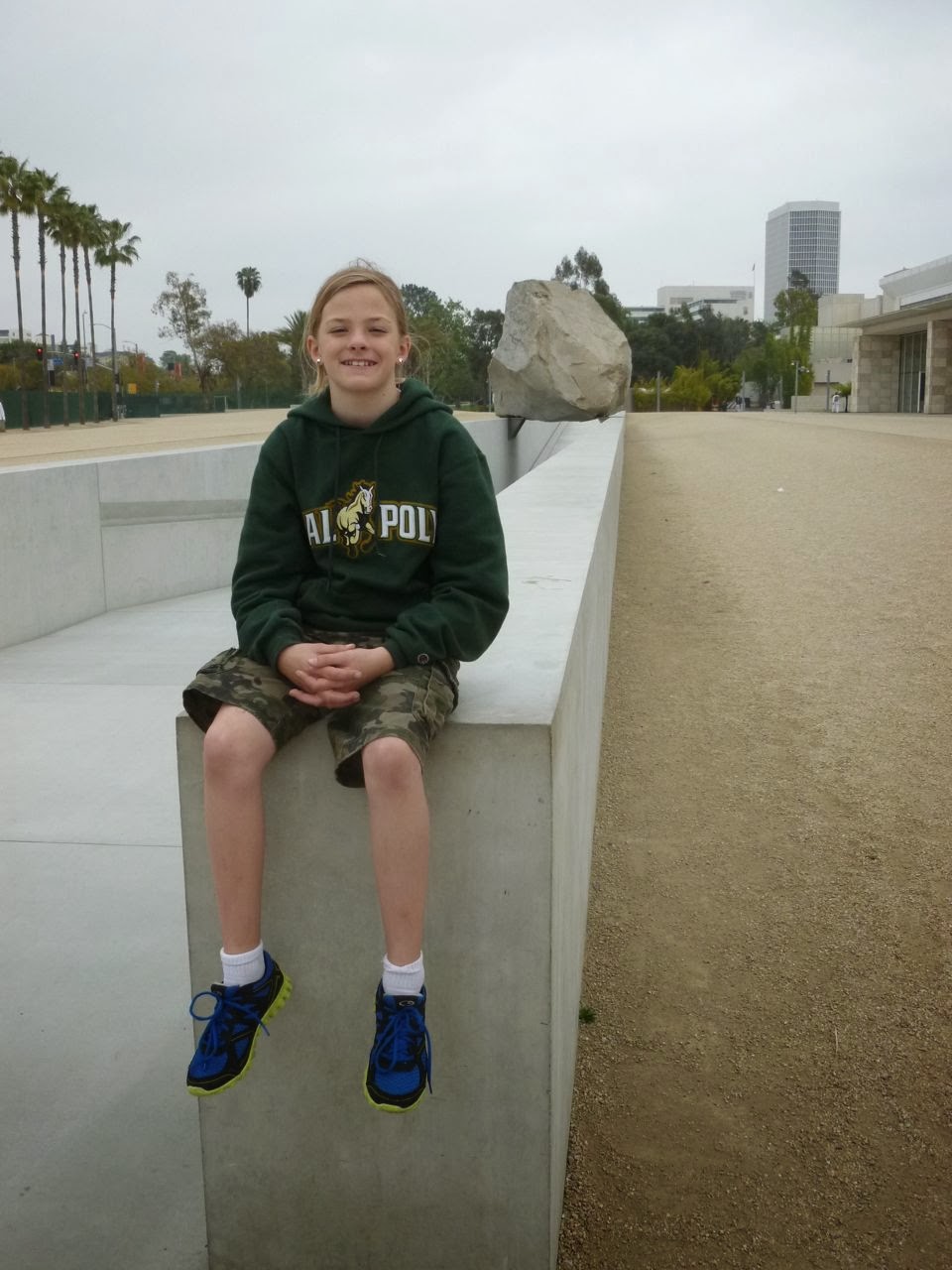 For something I previously thought was pretty dumb (in terms of art) I sure eneded up taking a ton of photos. Maybe because it early in the day, and my kids were still "fresh." 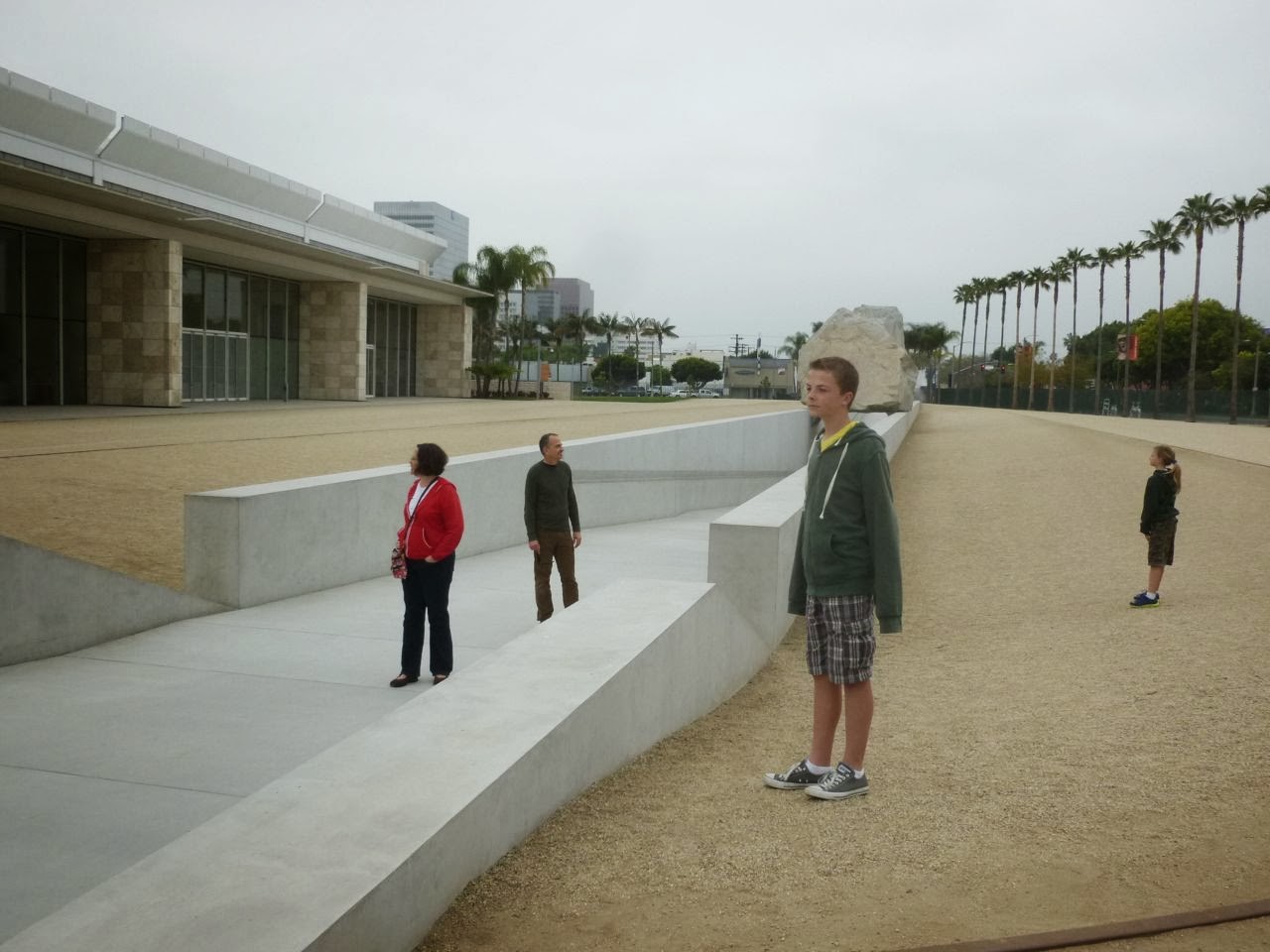 I called this our "album cover" photo. A security guard walked by and was kind enough to take several family photos. 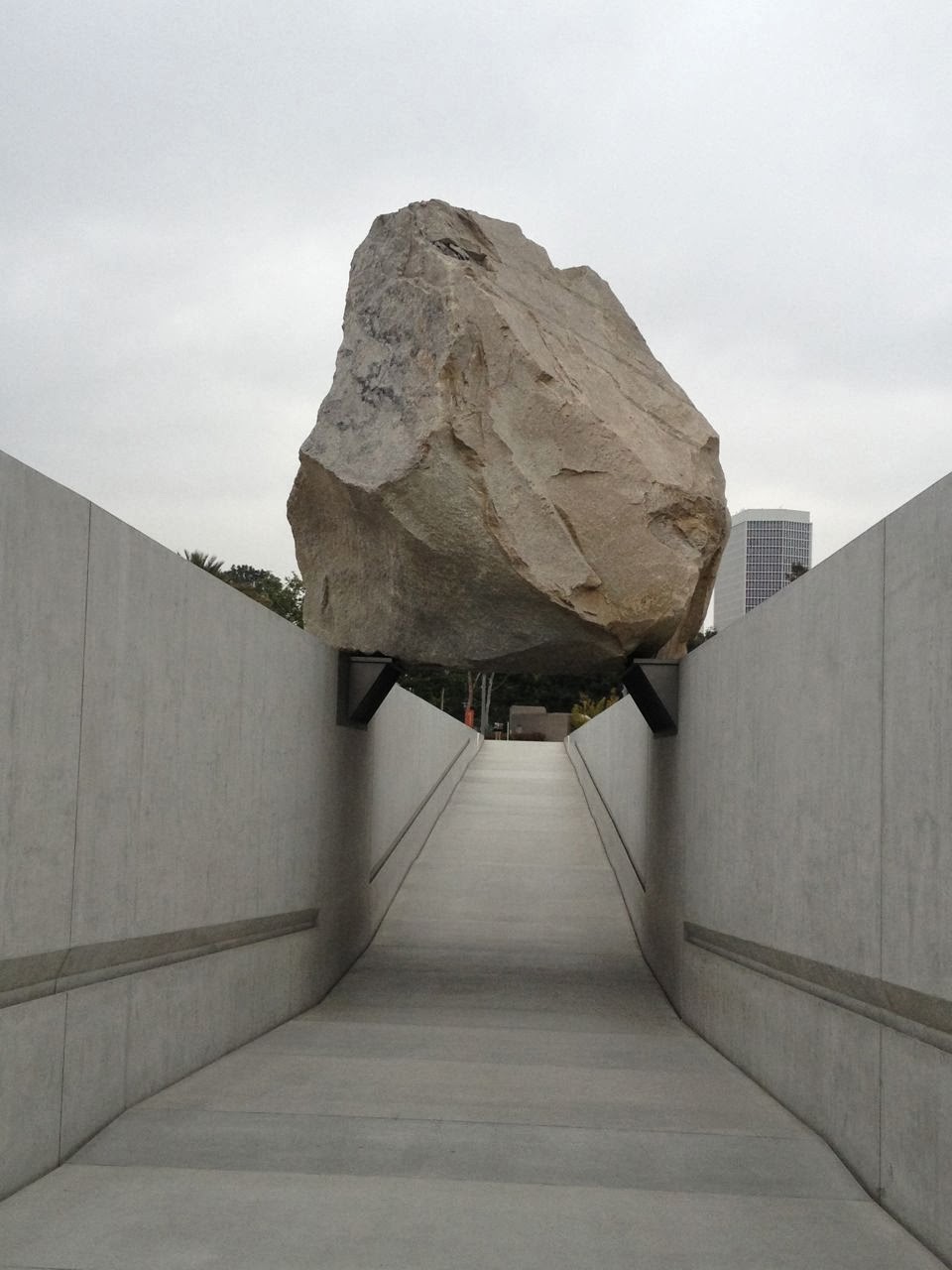 "Levitated Mass" is located on the Los Angeles County Museum of Art grounds at Wilshire and Fairfax. It's open from 7am to sunset - and there is no admission charge (nice).

Is it worth a special trip? Probably not. But there's a slew of other things to see and do within a five minute walk, including Chris Burden's Urban Light, the largest section of the Berlin Wall outside of Germany, and the world famous La Brea Tar Pits.

More on this in two weeks.