Back to Bethlehem: Devonshire & Winnetka in Chatsworth 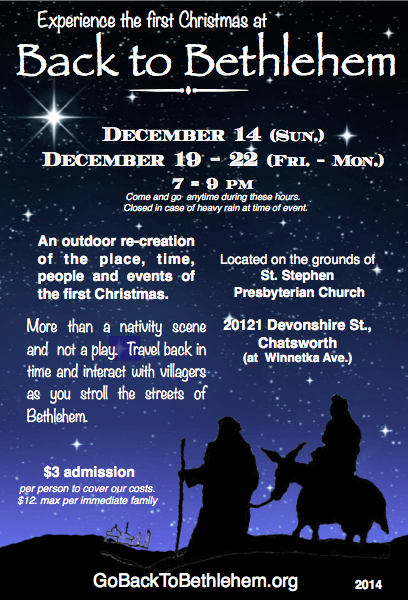 This Christmas season a group of Los Angeles churches in the San Fernando Valley are once again sponsoring a "Back to Bethlehem" Christmas event.

Located at 20121 Devonshire Street in Chatsworth, Back to Bethlehem is a re-creation of the sights and sounds of ancient Bethlehem on the night of the first Christmas.

It's not too late to go! The event will continue tonight, Sunday and Monday nights!

I took a few photos when when my family and I attended a few years back.

It's a very impressive re-enactment of what life might have been like in Bethlehem as Mary and Joseph would have experienced it, entirely staffed by volunteers. Whether you're single, married, or have kids - this is a great event to experience! 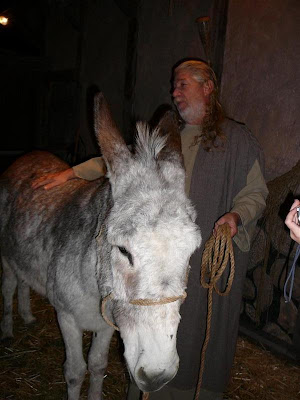 Hundreds of volunteers do an amazing job bringing this event to life.

There was "no room at the inn" ... but a donkey outside of the simple stable nearby gave a hint of what might be inside. 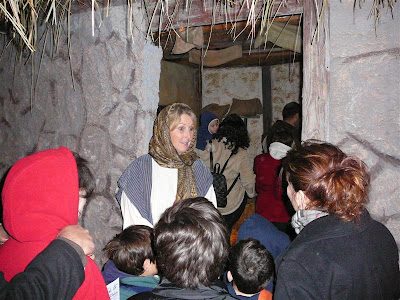 Waiting to visit Mary and Joseph, and their newborn son.

This is a fantastic event for families to help explain the Christmas story to their children - and for adults to imagine what the first Christmas was like. 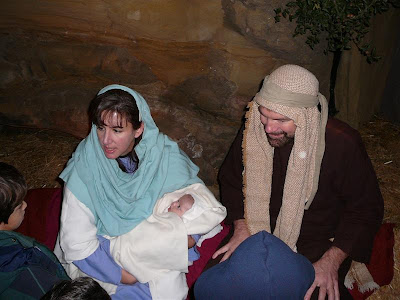 Mary and Joseph inside the stable, sharing the story of the first Christmas with the thousands of visitors every night. Each year this event attracts 18,000 people over six separate nights. 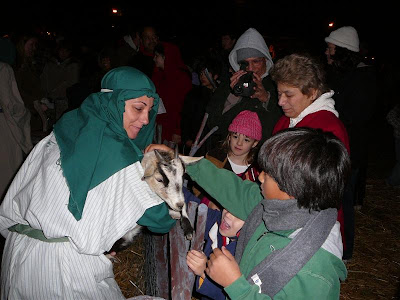 Outside the stable, sheep and goats. A reminder of the environment Jesus was born into. A volunteer lets kids touch a goat. 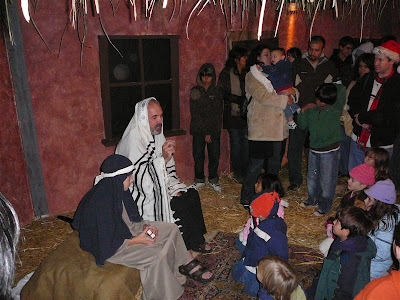 At the edge of Bethlehem is the rabbi school. Children and adults gather around to hear the village rabbi share the prophecies about Messiah from Old Testament prophet Isaiah. 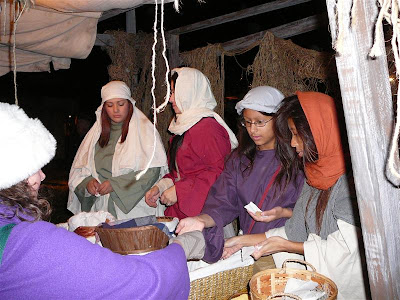 Every visitor receives free shekels at the entrance. Spices were just one of the many items you could buy. 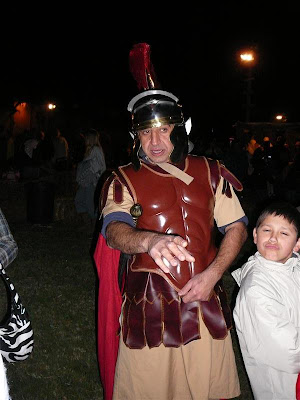 The Roman soldiers walking around were a reminder that Bethlehem in the first century was a conquered, occupied territory (I have no idea how these guys - again, all volunteers - stayed warm in togas and sandals.) 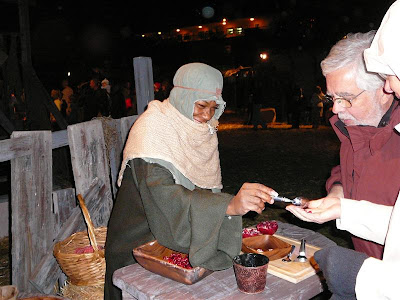 Pomegranates. This vendor was smart and was prepared for a chilly evening. 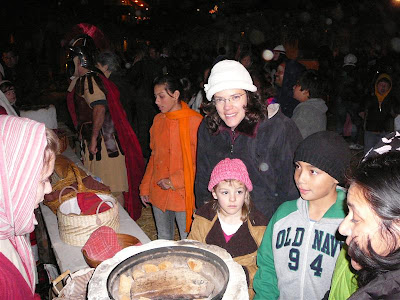 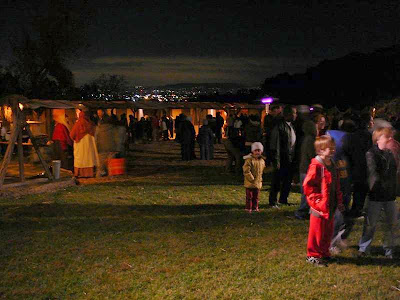 The shops and stalls were in a circle around a large field the year we attended. While the event has since moved to St. Stephen's Presbyterian Church at Devonshire & Winnetka - which is a more central location - I'm assuming the set up is similar and  continues to be held entirely outdoors.
Our kids loved the freedom of being able to go from booth to booth, running around buying little things, having the small samples of food. It really helped bring the Bible to life: Jesus was born in a real place at a real time. 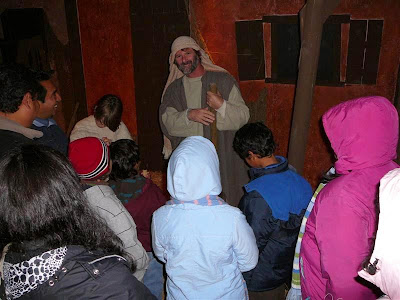 A shepherd recounting his experience of the angelic visitation announcing Jesus' birth. What was impressive was that this particular volunteer playing the role of a shepherd was also bi-lingual. 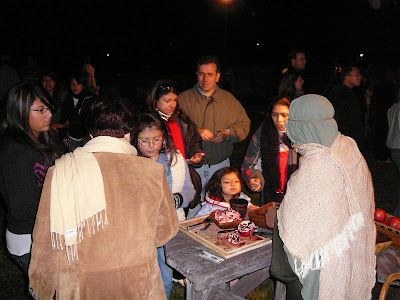 It was neat seeing the diversity of visitors that night, as well as many of the volunteers. A reminder that the gospel is for "all the people." 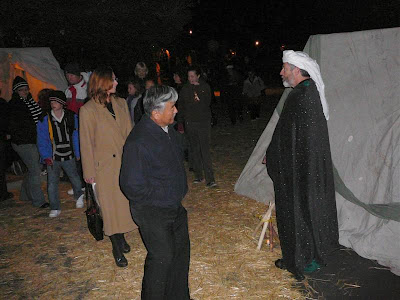 At the edge of Bethlehem, a group of Magi were encamped, looking for "Him was was born King of the Jews."The night we went, the event seemed well attended, but never felt overly crowded. Definitely something we'd like to see and do again.
On behalf of our family and the thousands of kids and adults who experience this every year, a huge THANK YOU to the hundreds of volunteers that make this outreach to the community happen.

While the concept of a "walk through Bethlehem" is not unique to Los Angeles, it is the largest American city where an event like this can be held entirely outdoors. Hard to image this in a place like Chicago or New York. Come to think of it, our climate (Mediterranean) is also the most similar to what Jesus and those around him would have experienced.
In what can unfortunately be a very busy and stressful time of the year, this final photo sums up both this event, and Christmas itself: 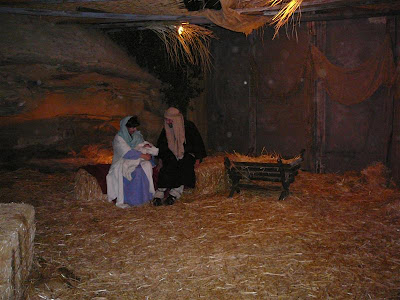 "Do not be afraid. I bring you good news of great joy that will be for all the people. Today in the town of David a Savior has been born to you; he is Christ the Lord. This will be a sign to you: You will find a baby wrapped in cloths and lying in a manger." Luke 2: 10-12 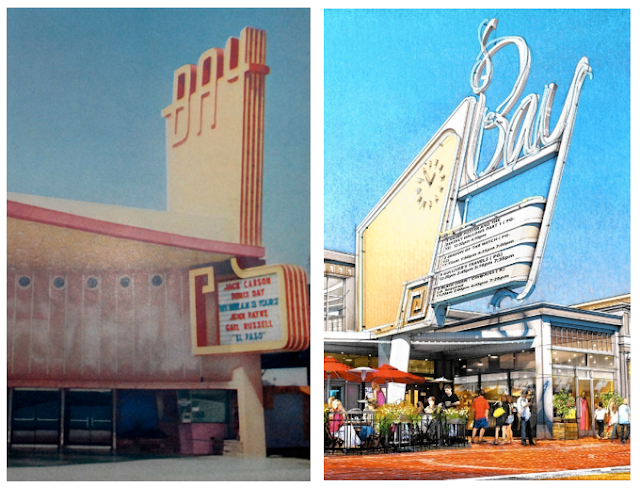 This past week, Los Angeles based developer Rick Caruso unveiled a plan to update and re-vitalize the business district in the Pacific Palisades, an upscale coastal community on the western-most edge of the city of Los Angeles.

With a vision to bring a re-imagined version of the long defunct Bay Theater as part of the plan, local residents seem excited to see this move forward. Of course, there are detractors who are concerned about traffic (what else is new), parking, or that it looks too much like Caruso's "The Grove" complex.

Considering the cost of putting together a project like this, I'm surprised how low density it actually is. Everything is limited to one or two stories, and the plan even includes a small park to replace a current parking lot.

Having grown up in the Palisades - back in the 1970's, when the community was much more "middle income" - it looks pretty stellar.

Here's a link to a story in Curbed Los Angeles, with more photos and a ten minute promotional video.