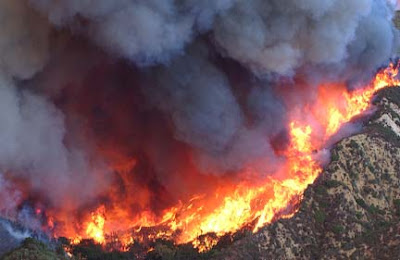 Thirty-three years ago today, October 23 1978, a fire broke out at 9:41am near Mulholland Drive and the 405 Frwy in the Santa Monica Mountains. Stoked by Santa Ana winds and very hot, dry conditions within a few minutes a large brush fire started moving westward. 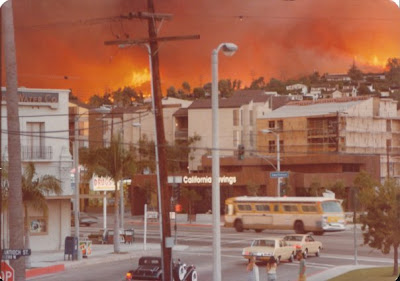 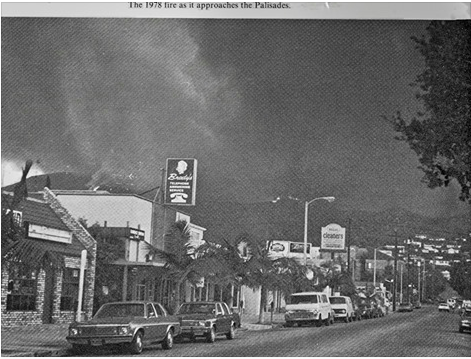 Via de la Paz, looking north from the business district. 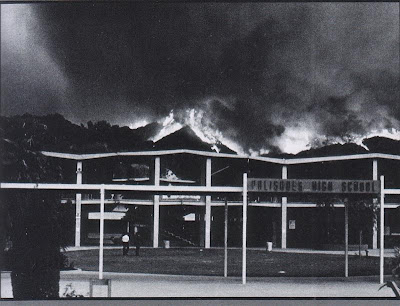 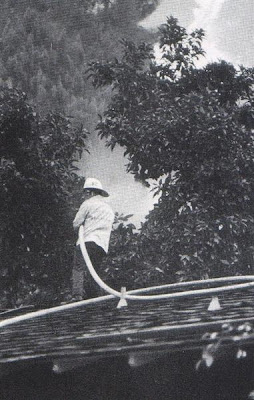 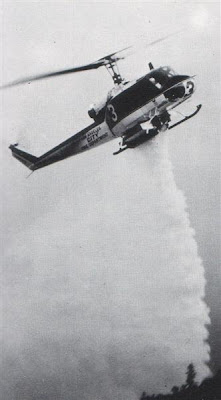 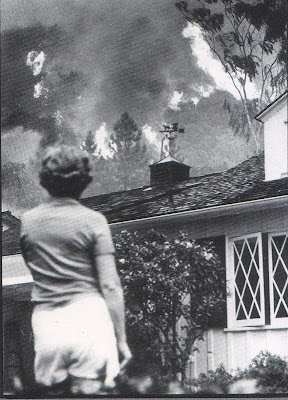 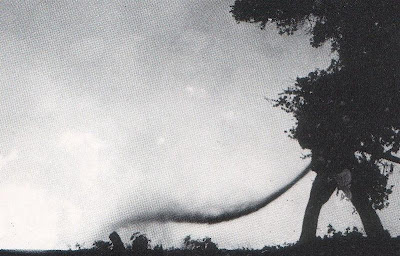 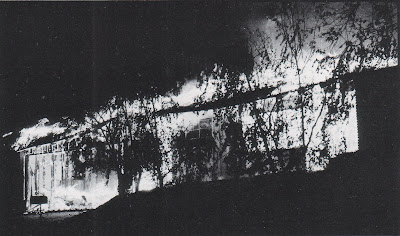 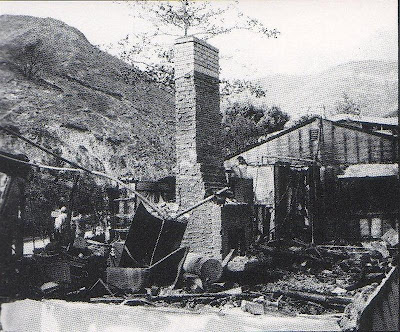 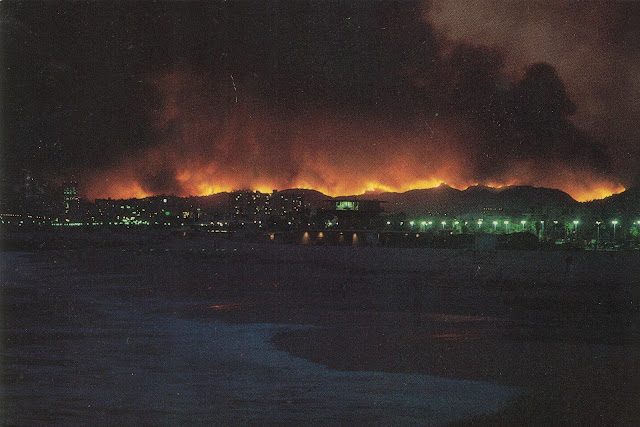 Here's another color photo. It was actually a postcard, and was for sale for several years afterwards.The back of the postcard reads: "Santa Monica Mountais on fire-Fall 1978. The fire is nearly 10 miles wide in this photo taken from Venice, Calif. Photo and copyright by Jeffrey Stanton." 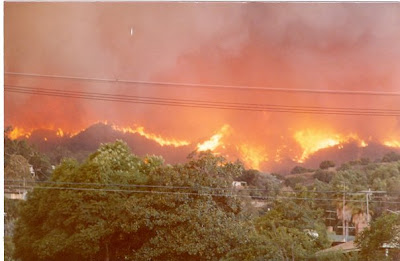 Every year Southern California deals with brush fires. In fact, three years ago today, another fire broke (below) next to the 405 Freeway - very close to where the Mandeville Fire began 30 years earlier. Fortunately, it was put out quickly. 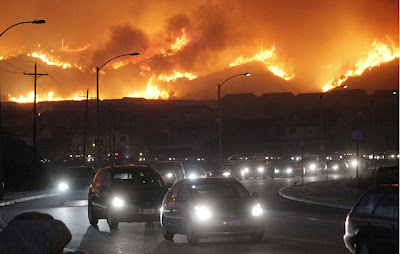 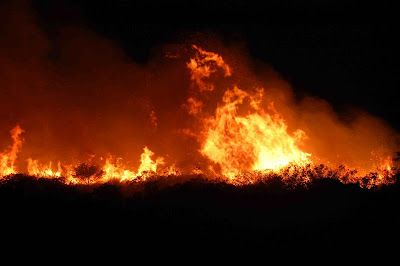 Of course, I remember this well. It was a beautiful day--warnm, dry, good waves (I was at the beach at one point). But, it was the winds that drove this disaster, as the fire rose up the hillside of one canyon and over into the next, marching across the mountains. I remember the fire coming close to Sunset, across from Pali, in Temescal Canyon, which is the canyon I lived in. It never occured to me a fire could come close to the house, and yet there it was only 2 blocks away. Not as close as I believe it came to you, way up in the hills, but a real surprise nevertheless. Fast forward to May 2009, and my mother and her husband were forced to evacuate with 10s of thousands of others when an enormous fire devastated the hills above Santa Barbara. Dozens of homes were destroyed. Fortunately, her home was spared, although the fire was just around the corner and could have run through the arroyo that is her back yard right up to the house with its shake roof. That is what could have happened to us in 1978. Controlled burns do work, and are done in some places--though usually not close to neighborhoods--but you are right the danger is great, both environmentally and politically. Living as I do now in the soggy East, I laugh and shake my head when they talk here about a "drought" and a 3 or 5 inch "rain deficit." Gene

Thank you for allowing me to post: I lived off El Hito Circle, I distinctly recall standing on my parent's roof hosing it down as the flames came over the hill and into a gully full of Fire Fighters .... Man ! They have a lot of Yables !!

I was a student at UCLA and saw the fire starting while walking to class on Bruin Walk. The winds were indeed high and it was ignited by a fallen power line up near Mulholland Drive. I snapped a few photos with a pocket camera that I carried along in my backpack - will send you some scans if you'd like. My email is TKHelble@aim.com.

Thanks a lot for your interesting site! I've been reading Joan Didion's "The White Album" (a collection of essays, many about CA. She was born in Sac and lived in CA most of her life. Particularly if you're interested in the 60s and 70s, she's fascinating and a great writer) and encountered a piece about this fire. Didion lived in Malibu at the time and she knew a lot of the people who lost their homes. I went looking for more info and found you! You have the best pictures of the fire I've found so far, and your first-hand account is very interesting. I also am amazed by the speed of these fires, and the wind they generate. I read that this fire became a firestorm (I THINK that's the term used when the fire becomes so hot it actually ignites the oxygen?) and burned in excess of 2500°, generating its own wind of around 200 mph. So you see how it can move fast... I don't really understand the physics by which fires generate their own wind - the result of the energy created by the heat? If anyone reading here knows, please explain...). Also, you mentioned environmental factors. I know that an early transplant to the area from Australia, the eucalyptus tree, burns like crazy because the bark is loose and papery. It's sad that it took so long for us to learn the dangers of these transplants of nonnative species. Eucalyptus really love the SoCal climate.

The collection and movement of water for crops have also dried a lot of areas out, because their groundwater has been funnelled off to Big Agriculture, one of our worst ideas ever. On Hoover dam there's a plaque commemorating the men killed in its construction. It reads "They died to make the desert bloom.". Sadly, by now that blooming desert has taken the lives of countless other people, towns, animals, and natural habitat as well. Built in a time when we believed our engineering ability would solve all our problems, it remains a monument to our endless shortsightedness. And since it's all that keeps Vegas running, you might also say it makes the desert bloom with billboards and neon lights. But Edward Abbey covered that very well already. At this point, if there's a serious failure in the electrical grid (and a lineman acquaintance of mine tells me that it's literally held together with duct tape in many places), everyone in Vegas who's able had better start walking to Hoover, because that will be the nearest water source once Vegas loses power to pump it down. A stroll of some 80 miles... Oh, and I used to live in MN, where the DNR did controlled burns to maintain prairie lands. It does work. But now it seems like CA is getting so many uncontrolled burns that there'd barely be time for a controlled one. Anyway, thanks very much for the account and pictures! Putting my name here because it won't let me post under it- Gayle Crampton

I wish to correct the photo credit for the photo taken on upper Las Lomas through the telephone and power lines of the flames along the ridge. Michael A Pearson DID NOT take this picture and pirated it. My husband, Karl Edward Dean, was the photographer and took this photo that night. Please make the correction, removing Michael A Pearson's name and giving Karl Edward Dean photo credit. I would even prefer that you watermark this photo with his name on it!!

October 23, 1978. I drove to the Forum in Inglewood from Santa Barbara to attend the Neil Young concert there. As we approached the Conejo Grade East of Camarillo on the 101, we faced a huge black mass of dark smoke dead ahead. I did not think we were going to make it to Inglewood or if the show would be canceled.
All the way from Newbury Park to the Forum we were flanked by huge fires. It was scary and we were surprised to find that the roads weren't shut down.
In relative safety of the huge Forum, the concert got underway even as the fires raged seemingly everywhere around us.
Neil then announces that he had fled his Malibu residence earlier that day, which had been destroyed.
On the return drive, what had that morning been beautiful homes burned like big, bright candles all along the way until we exited the Santa Monica mountains area.
It was a bittersweet experience, emotionally caught up between the great music and the terrible losses suffered.
Thank you for hearing my little piece of history, on 10-23-78 which is a date I could never forget.

Thanks for sharing, Richard