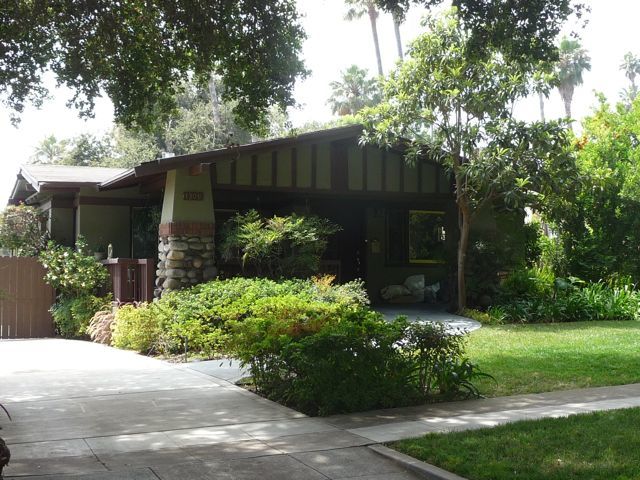 Bungalow Heaven, a historic neighborhood in Pasadena, contains over 800 craftsman style homes built between 1900-1930. It's one of the largest concentrations of restored craftsman style bungalows in California. 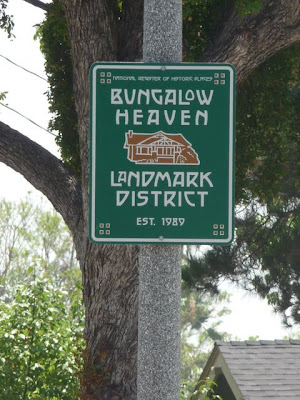 The Bungalow Heaven Landmark District was established in 1989 by local residents who wanted to keep the original flavor and architectural style of the neighborhood. 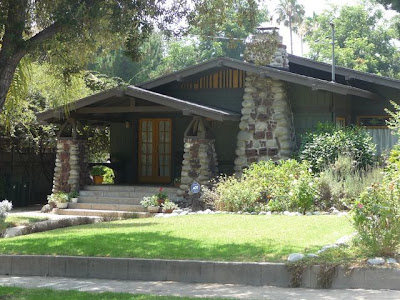 The "California Bungalow" style was developed here in California. As it gained popularity in other parts of the country it became known simply as a "Bungalow." 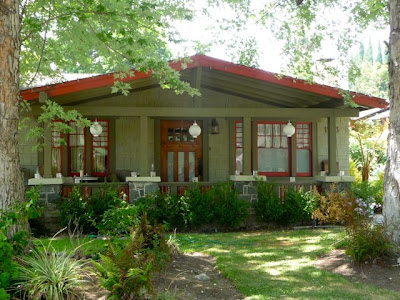 The California Bungalow represented a departure from the ornate Victorian Style and was an opportunity for the common man to own a simple, detached home. 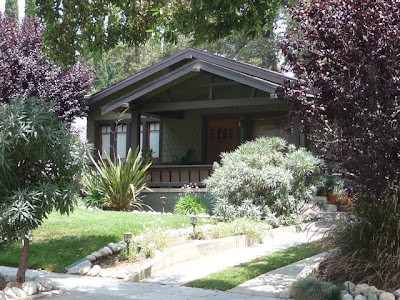 Gone was the formal entry and parlor, and was replaced by an early twentieth century idea: the "living room."

According to the good folks at Wikipedia, The California Bungalow includes: 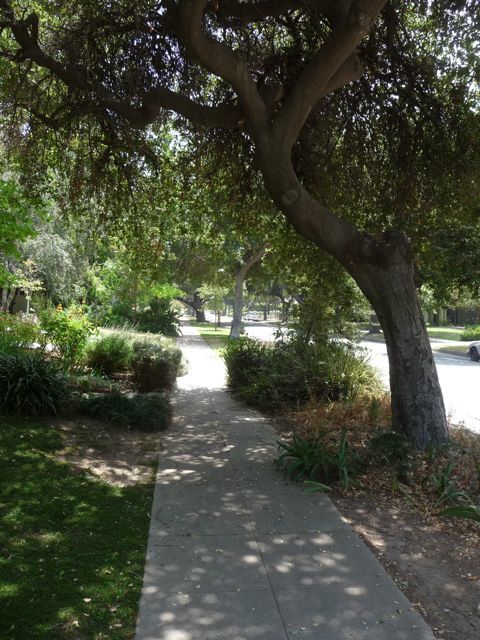 My sister-in-law and her family recently made a short term move to Pasadena. As we drove into the neighborhood, I realized they're living in Bungalow Heaven, which I'd read about on another blog. With a smile, I asked my sister-in-law: "You guys moved to Bungalow Heaven? WHY DIDN'T ANYONE TELL ME??"

Of course, I had to get out and explore the neighborhood on foot, with camera in hand. It's a wonderful, simply amazing community to walk through. 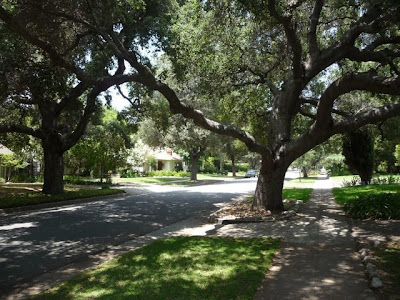 There's a reason why Pasadena (as well as several other neighborhoods in metro Los Angeles) look like the midwest: it was settled primarily by midwesterners. In fact, Pasadena's first name was "The Indiana Colony" (nice, but I'm glad the city fathers went with Pasadena). 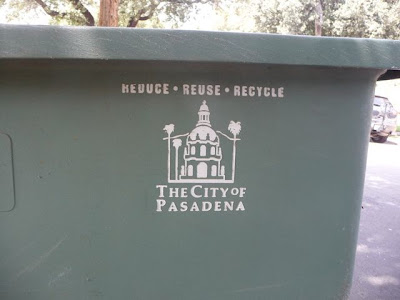 Trash day: this being Pasadena, even the can on the curb looked nice. 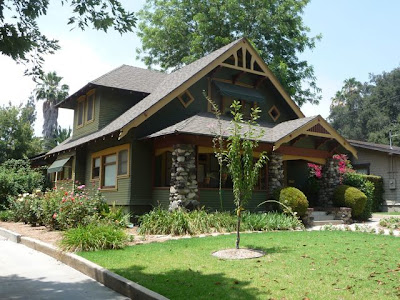 Here's a great example of a two story California Bungalow. The palm trees tucked in the background remind you we're not in Kansas (or Indiana, or Iowa) anymore. 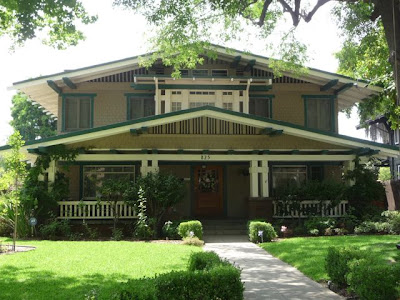 And another even larger home. Compared to everything else in the neighborhood, I wonder if this was considered the equilivent of a "McMansion" back in the day? 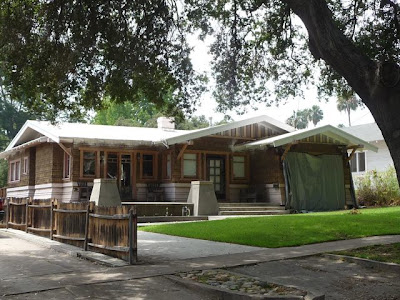 Speaking of " McMansions" - you won't find any tear-downs here. Homes in Bungalow Heaven can be restored, like this one above, but not replaced. In that sense, walking through the community is really like stepping back in time.

In an age of disposable everything, it's wonderful to see not only individual homes but an entire neighborhood returned to it's former glory. I'm really curious what this area looked like in, say, 1970. Did it ever go through a "bad" period? 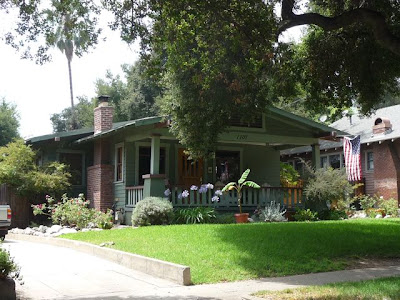 As a Christian, I try to engage my faith in every area of life, even something seemingly as trivial as a neighborhood. I don't think "what does God think of Bungalow Heaven?" - or any other neighborhood - is really a silly question.

But instead of focusing on a neighborhood in terms of the housing stock, maybe better perspective would be to think about the neighbors, that is, the people. Jesus concluded the Parable of The Good Samaritan with a question: "which of these three individuals was a neighbor to the man who needed help?" 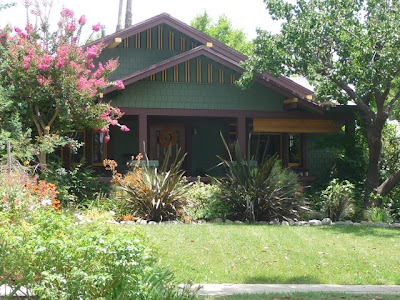 Whether Bungalow Heaven in Pasadena, the 100+ communities of Los Angeles, or our current home in Central California, I tend to think of neighborhoods in terms of buildings - the brick and mortar (or, in the case of Los Angeles, the wood and stucco) that I can see. 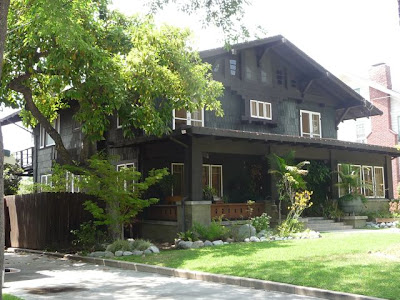 Not a bad thing, per se, but I'd like to focus less on buildings, more on what really matters - the people in a community.

People in my neighborhood who are, by and large, similar to me, and people in other neighborhoods who are often very different than me. 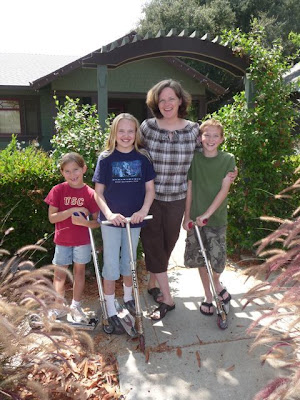 Speaking of people, this final photo is the reason why we were in Bungalow Heaven in the first place: seeing my sister-in-law and her kids.

She and her husband will actually be moving with their kids overseas next month (sad for us, but exciting for them). They'll be missed - but fortunately, there's email and skype. We're already talking about visiting them sometime in 2012. No Bungalow Heaven, though. 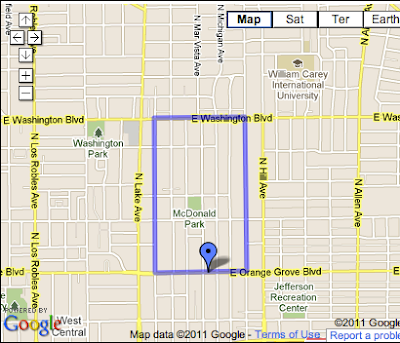 No, Bungalow Heaven it is not...BUT I'd love to read your thoughts after a visit to our new neighborhood!! Let's get those 2012 dates on the calendar!!

Not how I imagine LA -