On the corner of Santa Monica Blvd & Crescent Drive in Beverly Hills sits "Jack Colker's 76" gas station, one of the best examples of what is known internationally as "Googie" architecture.

According to this wikipedia article Googie architecture originated here in Los Angeles and was based on the car culture and optimistic Space and Atomic themes of the 1950's and early 1960's. In addition to roofs slopping at an upward angle and large glass windows, buildings featured boomerangs, flying saucers, atoms, starbursts and parabolas in the designs.

The name "Googie" was based on the Googie's Coffee Shop located on the corner of Sunset Blvd & Cresent Heights here in Los Angeles. When Yale University Professor Douglas Haskell saw the building on a visit to L.A., he ordered his car stopped and proclaimed, "This is Googie architecture." The name stuck.

The 76 Station in Beverly Hills is one of the best existing examples of Googie architecture here in Los Angeles. It's curved roof was was originally designed in 1965 for LAX by world-renound architect William Pereira. Looks like something out of the old cartoon series "The Jetsons" (remember that show?). When Pereira's design wasn't needed at the airport, it ended up as a gas station.


The sculpture consists of over 200 restored vintage light posts from around Los Angeles.


The historic lamp posts and the geometric patterns look neat during the day . . .


. . . but the best time to see them is at night. My wife and I were driving along Wilshire Blvd a few months back when I stopped and snapped off a couple quick pics. 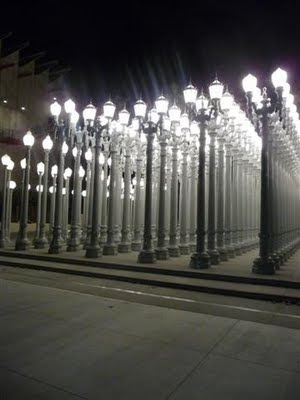 Wish I had some more time - and a tripod.

Here's a link to another site with some better pics of "Urban Light" http://artandperception.com/2008/02/urban-light-chris-burden-bcam-lacma.html. My hats off to the photographer. 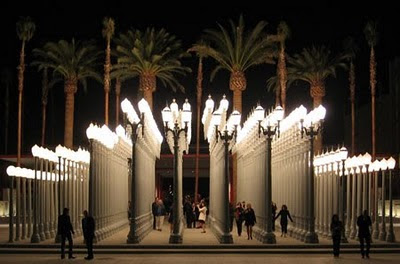 As a Christian, I'm reminded that "light" is use is a metaphor throughout the Scriptures. The first words spoken by God himself are the famous "let there be light" of Genesis 1. John's gospel describes Jesus as "the true light that gives light to every man." Jesus said of himself "I am the light of the world." The last chapter in the Bible describes God himself as the final and ultimate source of light. 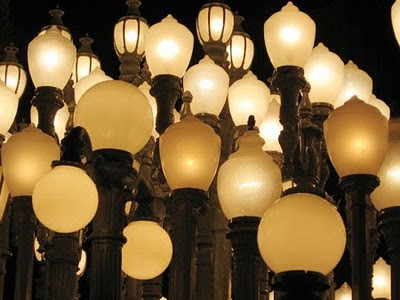 Some friends of mine used a photo of themselves in front of the LACMA light posts for their Christmas card. It's a great pic - and reminds me of yet another way light is used in Scripture: to describe the followers of Jesus Christ. "You are the light of the world" Jesus said to his disciples, and by extension, to those who follow him today. 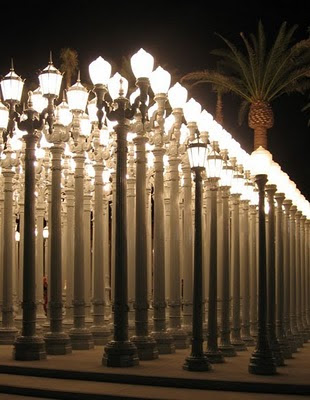 As we move into the Christmas season, it's a reminder for me to be perhaps less concerned about the twinkling lights around the house, more concerned with my character, my actions, and my involvement in those who Jesus described as "the least of these." 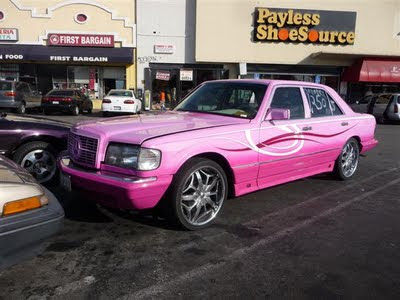 Back in November 2009 I was in Van Nuys, a community in the San Fernando Valley, with a couple of UCLA students. There are tens of thousands of Mercedes Benz in Los Angeles, but this is the first pink Mercedes I've ever seen. 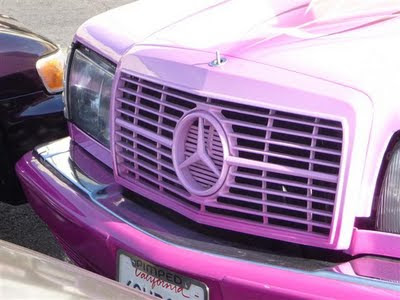 Yep, it's a Mercedes. After I took this picture, I noticed the liscence plate frame said "Pimped" -- as in "Pimp My Ride" a fairly popular show on MTV. 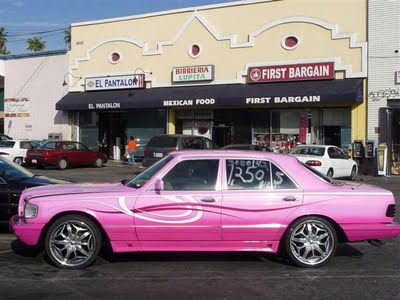 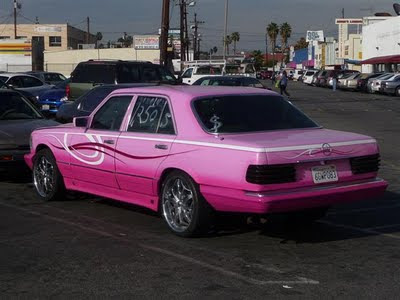 The paint is pretty impressive, although it's not my style. Reminds me somewhat of the classic lowriders, including those that were on display at the Petersen Automotive Museum
in 2008. 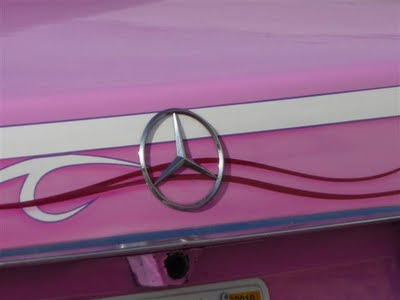 Meanwhile, the Apostle Paul, a leader in the 1st century church, would have driven "whatever" to get from point A to point B in advancing Christ's Kingdom.

For believers living in Los Angeles (and the rest of the Western world where owning a car is actually a possibility) that's a great principle. Not just with a car, but with pretty much everything. 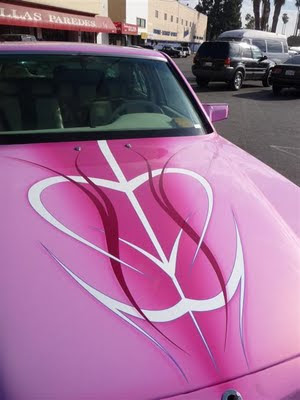 What do I know? I'm no expert on cars.

Wonder what insurance goes for?


I wonder where it is now?

No Stopping Any Time 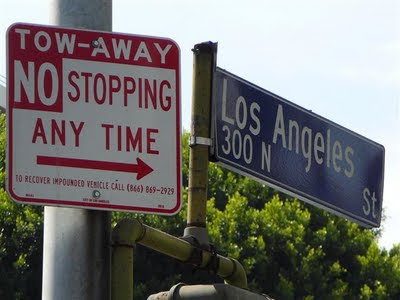 I was in downtown Los Angeles a while back and snapped a quick picture of these two signs on the corner of Los Angeles & Temple Streets. A somewhat ironic placement of parking and street signs.
.
The image of "laid back Los Angeles" is often just that, an image. The reality is that Los Angeles is fast-paced, driven, competitive city.
The early 20th Century industrialist and billionaire John D. Rockefeller was once asked, "how much is enough?" His response, "just a little bit more," reminds me how often I get trapped in the "more more more" attitude of society - an attitude only magnified in places like L.A.
If not in "stuff," then in work, in achievement, in recognition.
I like the slogan "work hard, play hard," but would add to it "rest hard" - or, perhaps better, "rest intentionally."
.
Even when the signs around me say otherwise.
.
Posted by David from L.A. at Saturday, November 21, 2009 2 comments:

The patterns and shadows of the Wachovia office tower juxtaposed against the blue sky and white clouds earlier this month made for an interesting photo.
.
This was taken earlier this month in Brentwood at the corner of Wilshire Blvd at San Vincente while waiting for the light. I just rolled down my window and looked up.
.
See, there is an upside to traffic in Los Angeles.
..
.
Posted by David from L.A. at Saturday, November 21, 2009 No comments: 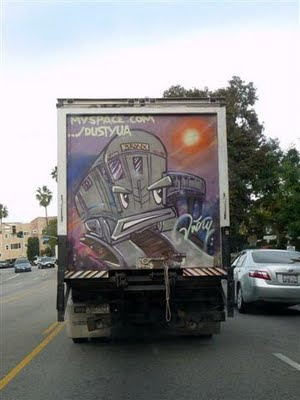 A few weeks back I came up behind this small commercial truck while driving on Sunset Blvd. in Brentwood here in Los Angeles. 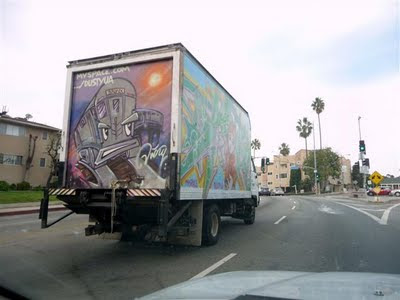 I was impressed with the rolling artwork and managed to catch a few shots through the front window of my car. 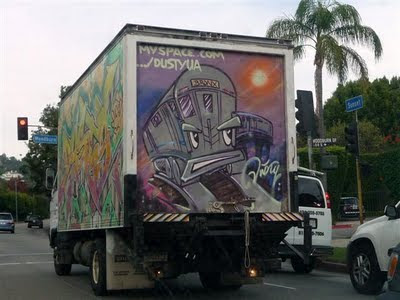 Like the pink Mercedes in a recent post (see below) I wouldn't call this artwork my style. But it's still well done.

My kids friends' introduced them to a homeschooler's YouTube video: "What's Art?" http://www.youtube.com/watch?v=ZvzdsHYUOxA. The YouTube video is sort of silly - something that only 10-12 year old would love - but brought up a good question: "what is art?" 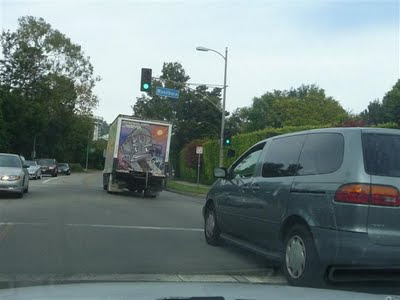 Form means (1) the elements of art, (2) the principles of design and (3) the actual, physical materials that the artist has used. Form is concrete and fairly easily described - no matter which piece of art is under scrutiny.

Content gets a little more tricky. "Content" is idea-based and means (1) what the artist meant to portray, (2) what the artist actually did portray and (3) how we react, as individuals, to both the intended and actual messages.


What isn't art? Here's another, similar sized truck a few miles away. It has about as much "form" and "content" as a dog marking out it's territory. Sorry. But it's really depressing, especially for people who have to deal with this form of domestic abuse in their neighborhoods on a regular basis. 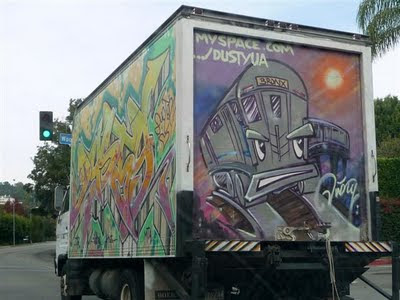 Two different trucks. Two different outcomes. Something creative as opposed to something destructive. As stated elsewhere, Los Angeles is a city of contrasts. Rolling art alongside defacing or destruction of personal - or public - property.

As a side note, this past summer our family spent six weeks in Chicago. One thing that struck me: where was the tagging? Where was the graffiti? Chicago successfully banned all aerosol spray paint several years ago, and as a result has virtually no graffiti anywhere.

Wonder how that would work out in Los Angeles? Probably pretty well.

An afternoon at Star Fleet Academy (aka Cal State Northridge)

Last May my wife and I went and saw the new JJ Abram's Star Trek movie. I realize I'm probably in the minority here, but as fan of the original series, I was generally disappointed with the film. Can a movie have too many special effects? Too many explosions? Fight scenes that are so unrealistic that they border on the absurd? Can a movie have so much "action" that it actually detracts from the story?

Wow, Lenord Nemoy is really getting old. And where was Bill Shatner? They couldn't find a cameo for him?

Living in Los Angeles, it's fun seeing how familiar (and not so familar) places are changed to fit in a film - especially if it's set in the past or the future. 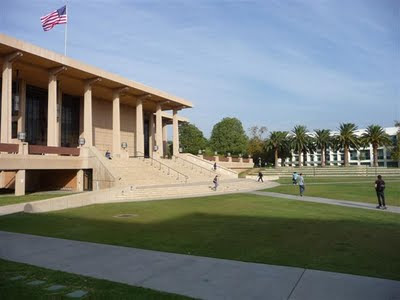 This past week I was meeting with some professors over at Cal State Northridge and took some pictures to see if I could match the photo from the film. Pretty amazing what some special effects can produce. 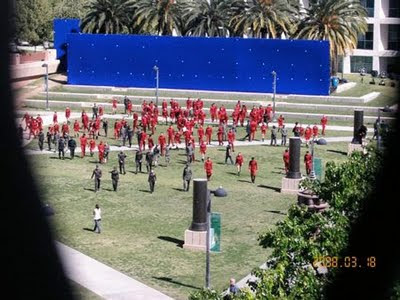 I found this photo from http://www.movieweb.com/. Someone from CSUN took a few photos through an office window during the filming on campus in March of 2008. You can clearly see the "blue screen" which allowed the special effects crew to matte a 23rd Century San Francisco. 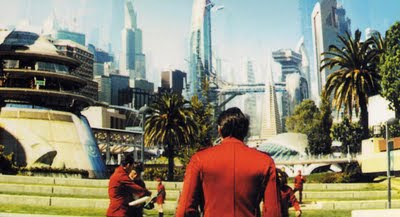 Here's another shot from the film that really took advantage of blue screen and mattes. The only part that's Cal State Northridge is the grass, the steps, and the palm trees. Maybe that's how CSUN will look in the year 2309. But this being Los Angeles, I imagine there will be some zoning issues with the homeowners associations around campus.

So, what's the appeal of Star Trek? Perhaps that deep down most of us are hoping for a better future for our great-great grandkids and for planet earth - even if it's 300+ years in the future.

Of course, some of the "futuristic" technology in the films already exists. And while other things like "transporter beams" may never happen, they look very cool on film.

Over the years, Star Trek (the shows and the movies) have surfaced some great questions: What is humanity's purpose in the universe? What does it mean to be human? Are there moral absolutes? Is there life beyond planet earth? Is there an afterlife? Who - or what - is God?

While I don't necessarily agree with all the answers the show proposes, they're still great questions. 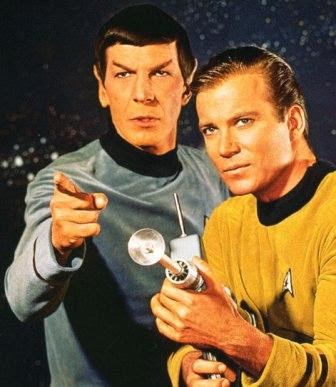 Wasn't it Socrates who said "the unexamined life is not worth living?"

Here's to finding the answers to those great questions. 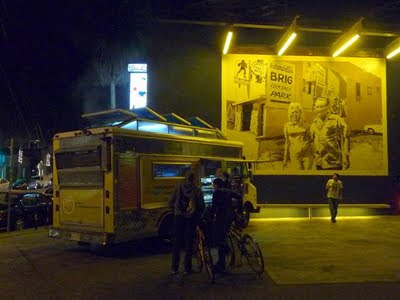 Driving home through Venice on Abbot Kinney Blvd I noticed yet another gourmet food truck in the parking lot at The Brig. As these trucks are usually out at night, I decided to pull over, check this one out. 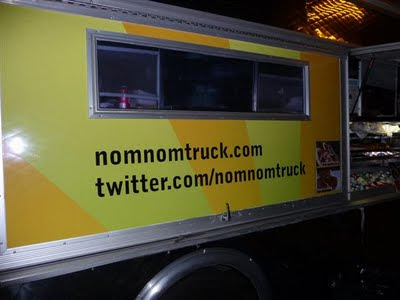 This is "Nom Nom Truck". Thanks to twitter, you can follow where they are, when they'll be in your neighborhood. 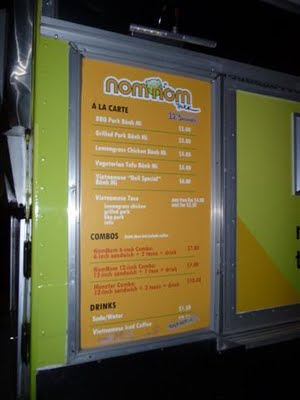 Bánh Mi - the big item on their menu - is a Vietnamese baguette sandwich. OK, I had no idea what Bánh Mi was until I looked it up on the Internet. But it sounds yummy.

Nom Nom specializes in Vietnamese food, including something called a Vietnamese Taco. 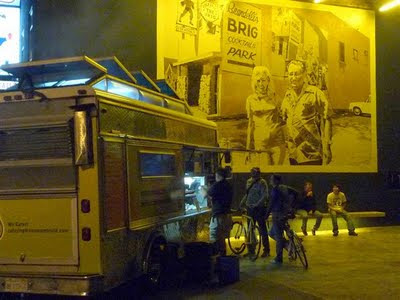 I've had a good experience with a gourmet food truck previously, but already had dinner. On another night I might have tried something. 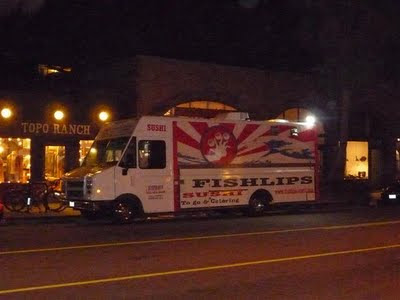 A block later on the same street I came across Fish Lips Sushi. 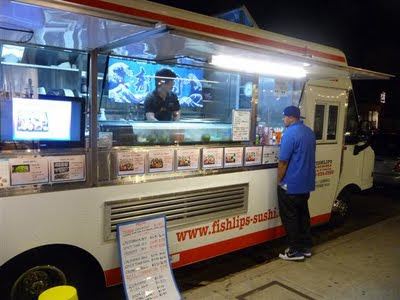 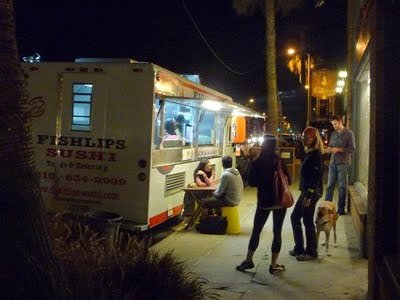 These two trucks were a block apart on the same street.

Are they a passing fad, or a peek into the future?

Los Angeles is known for setting trends that influence the rest of the country and the much of the world. Ten years from now, will cities like Omaha, Nebraska and Little Rock, Arkansas have similar gourmet food trucks, or is this a passing fad ... just another "L.A. thing?"

As a follower of Christ, I think there is something to be said about living in a city that sets trends that influence the rest of the world. I've met numerous Christians who've intentionally moved to Los Angeles for that very reason: wanting to make their faith real in a city whose impact spans the globe. Those who've moved here have found it challenging, and by that I mean on a practical day to day basis. Sure, you can twitter the location of a gourmet food truck, but good luck finding a Target or a Walmart.

2500 years ago the Hebrew prophet Jeremiah reminded the people of God to "seek the peace and prosperity of the city to which I have carried you ...[pray] for it, because if it prospers, you too will prosper."

True anywhere - especially in a city like Los Angeles.