The World's Second Most Popular Sport: Experiencing L.A. in Pasadena

This year's World Cup, held in Brazil, is a reminder that the world's most popular sport is football, which we in the USA call soccer. Easy, right?

OK, but what's the world's second most popular sport?

Based on the popularity of the NBA around the world, I had assumed basketball, right?

Basketball is the third most popular sport in the world.

So what's the second?

After trip to Pasadena a while back - and a fascinating conversation with a professor at Cal State Fullerton - I learned that cricket is the 2nd most popular game in the world. 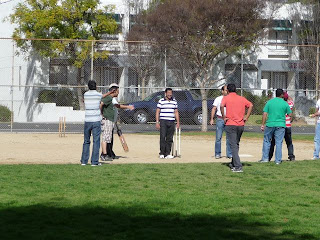 I know. I was really surprised, too.

Back in 2011, I was Pasadena saying good-bye to my in-laws who were moving to work in Shanghai, China. I snapped up a few photos of some locals enjoying a game (or is a "match"?) of cricket. Locals meaning Indian Americans (not to be confused, of course, with American Indians). 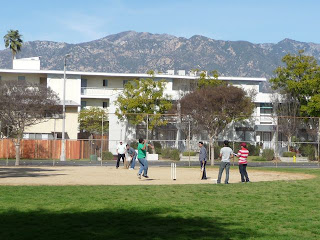 I watched for a couple of minutes and snapped a  few photos. Aside from being slightly similar to baseball, I have NO idea how this game is played, or what's involved. And, yes, it's the second most popular sport in the world. Who knew, right? 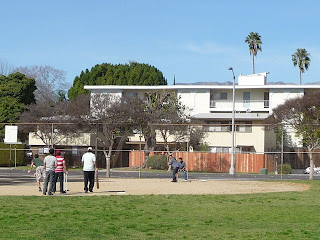 While cricket would normally mean someplace in the United Kingdom, India, Pakistan, or Australia ...  the palm trees, apartment buildings, and mountains in the background all say someplace in metro Los Angeles. In this case, Pasadena.

With about 120,000 Indian Americans, metro Los Angeles has the fourth largest Indian-American community in the US. 18 million people call greater Los Angeles home - making it the 13th largest metro area in the world. Los Angeles simply has a lot of everything - and everyone.

Indian Americans make up about 1% of the US population. They are also one of the eight groups that authors Amy Chua and Jed Rubenfed constitute the "triple package" to make them some of the most successful ethnic group in the US (the other groups are Iranian, Lebanese, Nigerian, Cuban, Chinese, Mormons, and Jews). I heard about - but haven't yet read - their recent book: The Triple Package: How Three Unlikely Traits Explain the Rise and Fall of Cultural Groups in America. Interesting thesis. As a campus minister working with college students, I'm looking forward to picking it up.

Here's a wikipedia article on cricket. Enjoy the game. 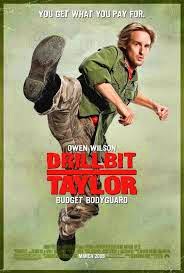 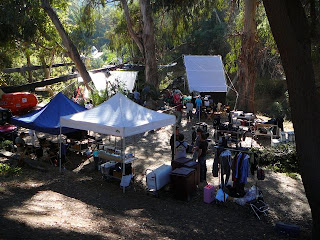 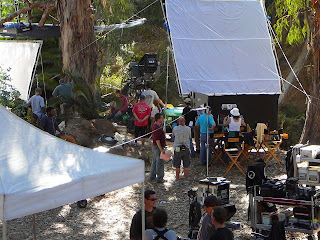 My kids, and and 5 and 8 at the time, and I were in Temescal Canyon Park in nearby Pacific Palisades and  stumbled across a film called "Drillbit Taylor" being filmed. 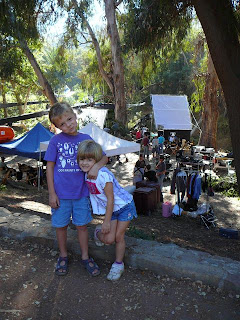 If my kids look bored - it's because they were. For them, walking around a set - with nothing going on - was about as exciting as watching paint dry. 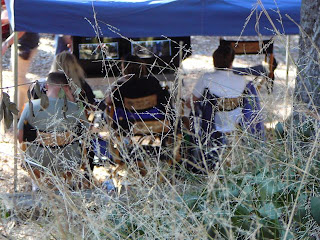 It was interesting for me as an adult to see this park tranformed into an on-location set. The director was takling with the cameraman for a few minutes - so everyone else was on hold. 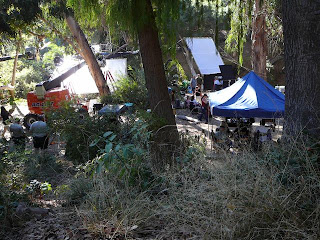 There are a lot - I mean a lot - of people on the payroll. How much does something like this cost per hour? How much does a 10 minute break cost so that the director can have a little chat with the cameraman? Of course, that didn't keep me from taking a few photos. 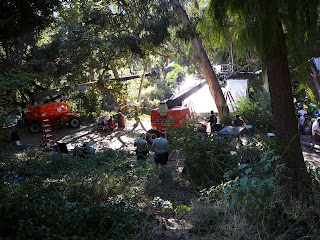 Apparently, before 9/11, the Los Angeles Film Permit Office had daily on-line list of every movie, TV show, or commercial being filmed in L.A. If you were visiting Los Angeles, even for just a few days, could drive over and see a real movie being filmed. 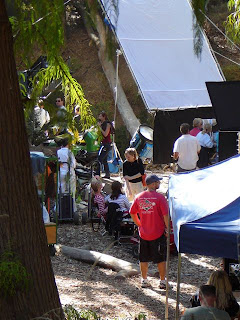 People visit L.A. from all over the world, hoping to see a bit of the real Hollywood. How cool is it to say "I saw a movie being filmed"? Even if it's something you never get around to actually watching?

I guess you could make the arguement that if you happen to "by chance" come across an on-location film crew, it makes it even more special.

If you happen to see a large yellow sign with a strange title, most likely it's pointing to a movie shoot. Here's a few examples I pulled off the internet.

No guarantees, but a good place to start. Have fun. 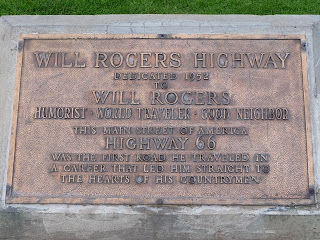 Historic Route 66 begins in Chicago, Illinois - and terminates in Santa Monica, California where Santa Monica Blvd ends at Ocean Avenue. This marker placed in 1952 in Palisades Park commemorates Route 66, also known as the Will Rogers Highway. 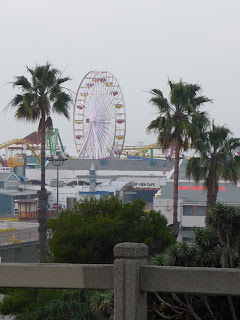 Route 66 informally continues another 3/4 of a mile - to the end of the Santa Monica Pier. 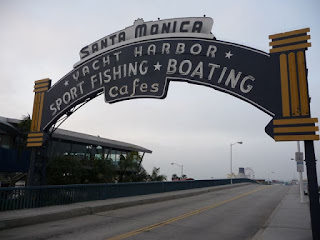 These photos were from the five years my wife, kids, and I spent living in Los Angeles, back around February 2010.

I parked on the street at Santa Monica Blvd & Ocean Avenue, and walked a couple blocks to the pier. 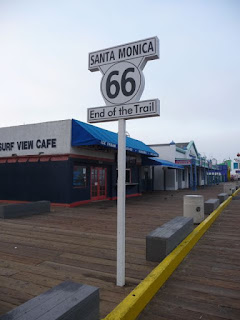 This unofficial continuation of Route 66 keeps the road going west - all the way on out over the Pacific Ocean. 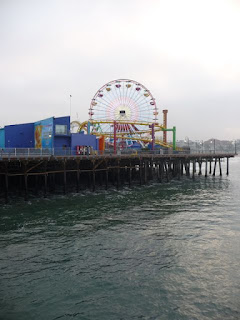 The Santa Monica Pier celebrated it's 100 year anniversary while we were living in Los Angeles. It's a nice place to spend a few hours. 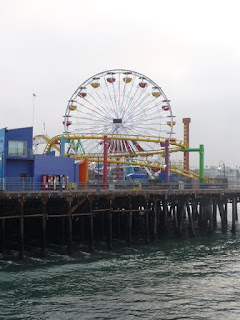 If you want to "ride the rides" I'd suggest the massive Ferris wheel, as well as purchasing one of their unlimited rides wristbands online ahead of time. Best value. 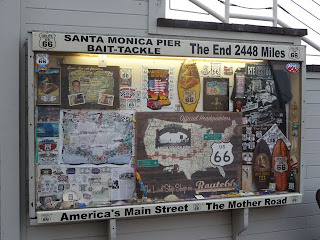 A display at the western terminus of the pier on Route 66, what's been called "America's Main Street." 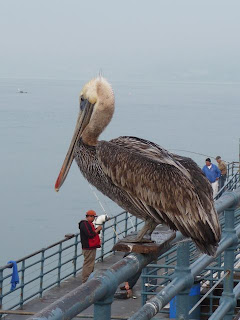 Pelican at the pier. Growing up decades earlier as a kid in Los Angeles, my Boy Scout Patrol (part of the larger Troop 223) was the Pelican Patrol. And it's just a cool looking bird. 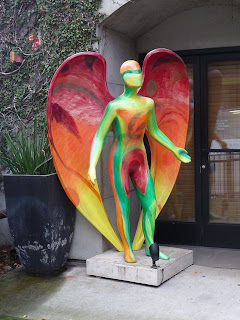 Walking back to my car parked I passed by one of the angel statues that you'll occasionally see around Los Angeles. Here's a link to what these are all about. 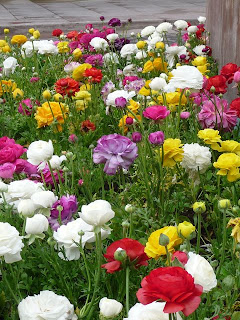 Some flowers at the Third Street Promenade shopping district. 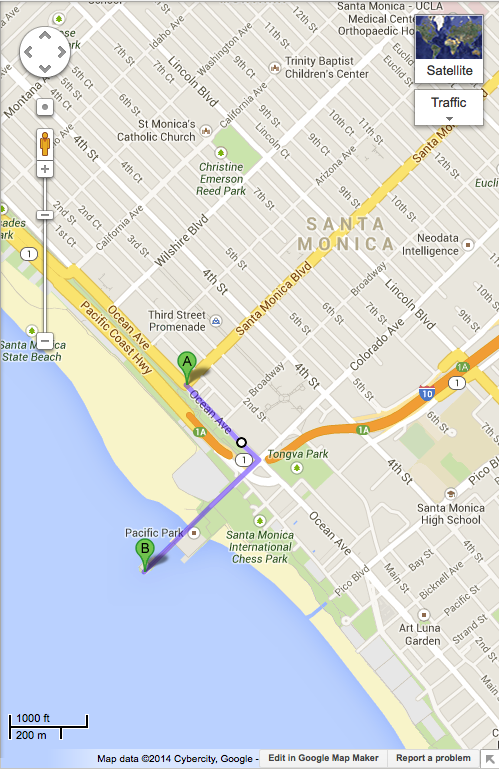