In March 2013 my wife, kids, and I were back in Los Angeles for a little three day get away.

Day One we saw the Brady Bunch House, the Los Angeles Zoo, the Hollywood Sign, and spent the afternoon at the Grauman's Chinese and the El Capitan Theaters. 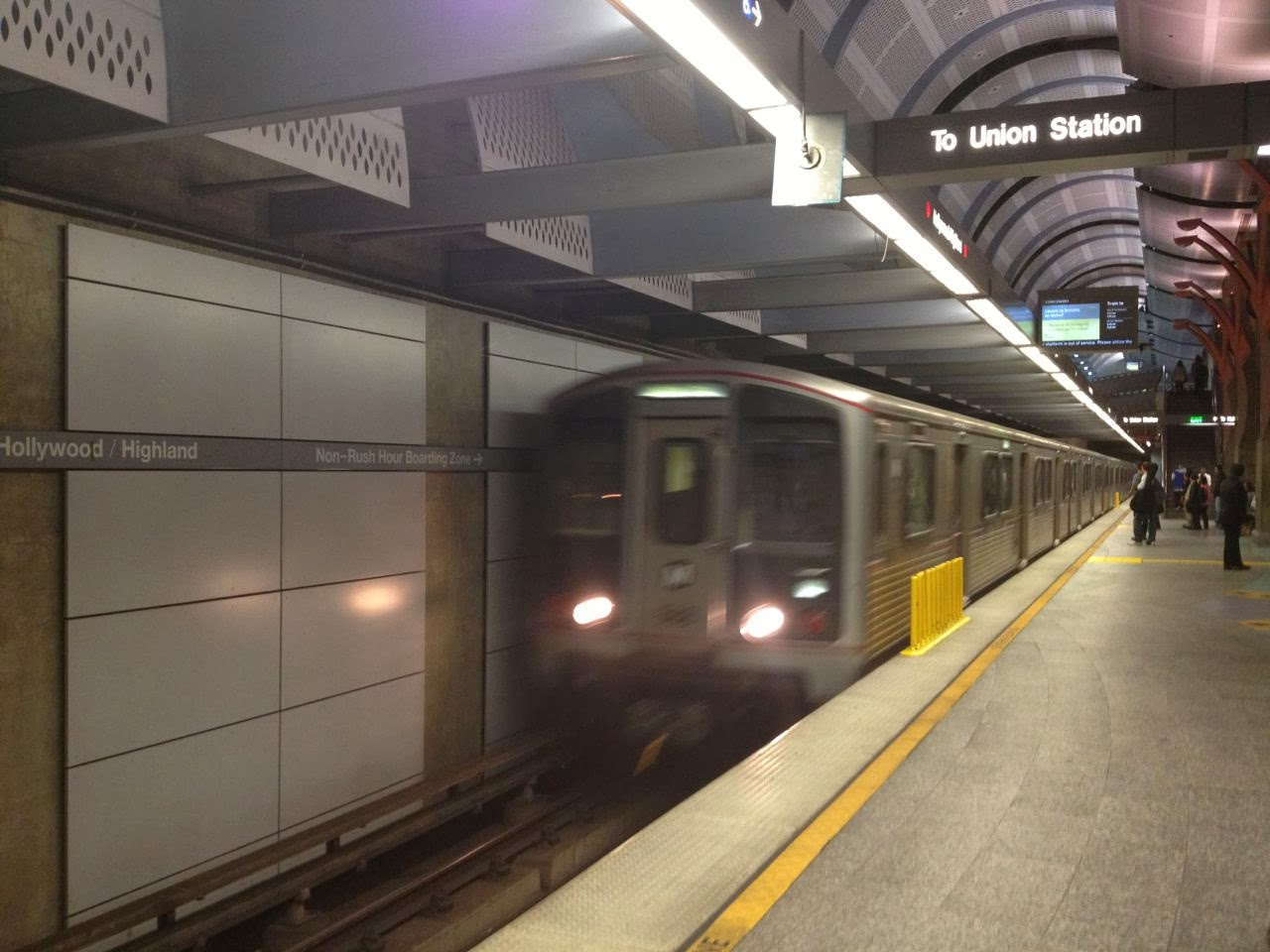 Day Two we left our car at the hotel and decided to see the city via public transportation.

Yes, in addition to a small light rail system, Los Angeles does have a subway, running from Downtown Los Angeles to North Hollywood in the San Fernando Valley. We were staying in Hollywood, so we caught it at the Hollywood and Highland Station. 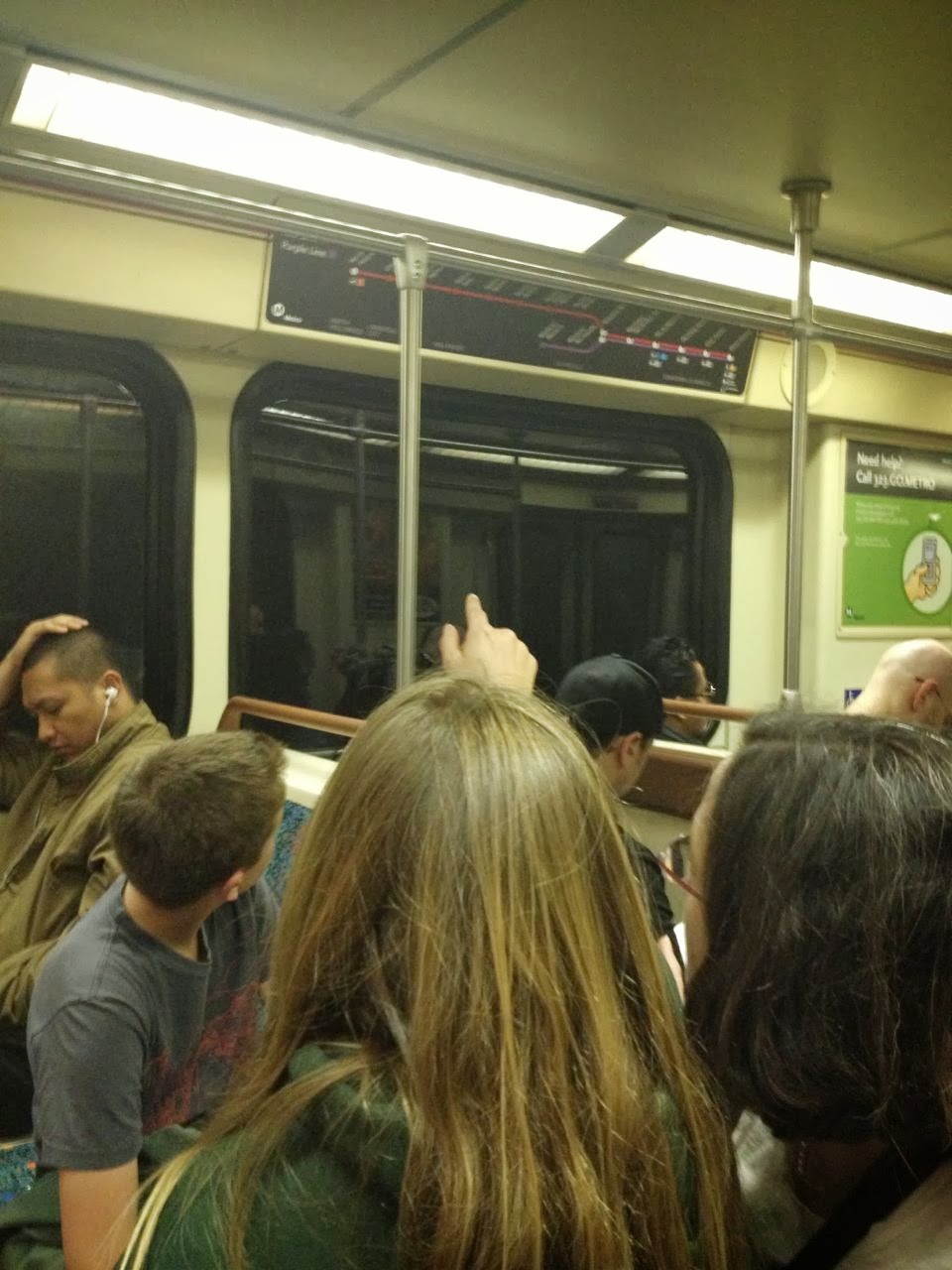 My daughter counting the stops. 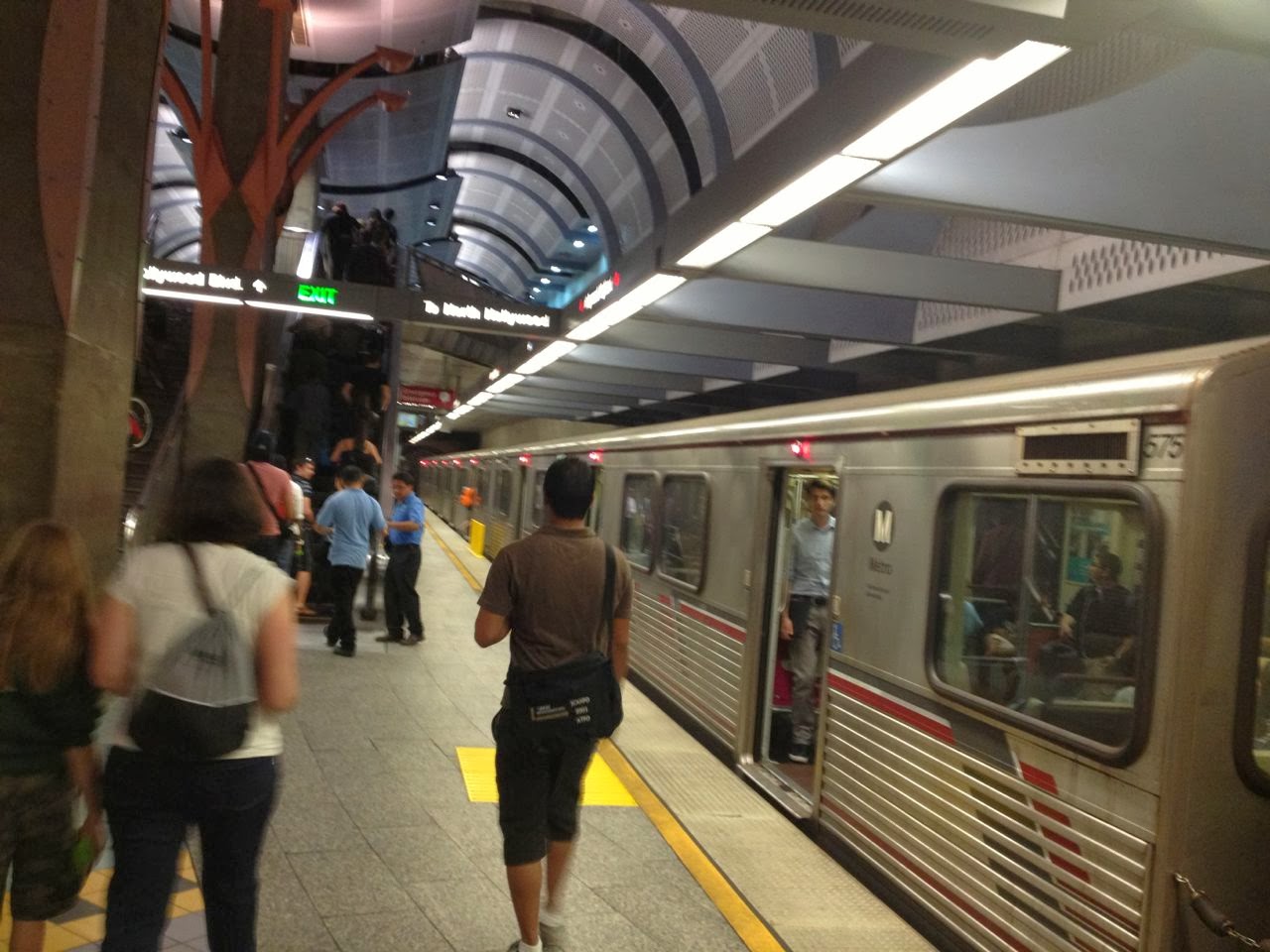 We got off at the Civic Center, one stop before the terminus at Union Station. 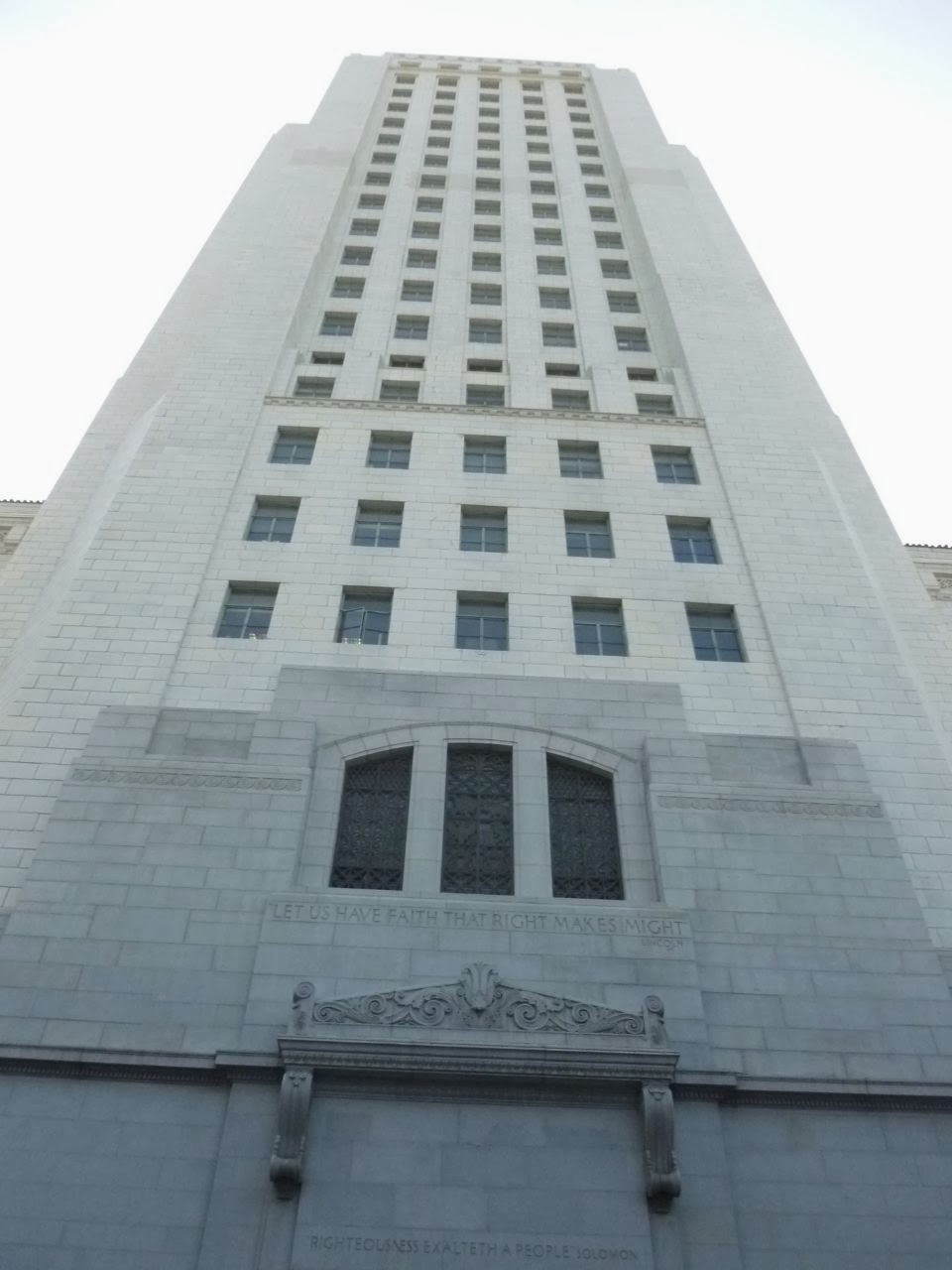 City Hall, Downtown Los Angeles. The early morning sun behind the building made it tricky to get a photo. At 32 stories, L.A. City Hall was the city's tallest building until 1964.

This being Los Angeles, L.A.'s City Hall has been in numerous films and T.V. shows, including standing for The Daily Planet on the 1950's Superman T.V. Show.

Our destination was the 27th floor Observation Deck, which is free and open to the public. I grew up in Los Angeles. I went to college at UCLA - in Los Angeles. My wife, kids and I lived in Los Angeles for five years. But for some reason I had never made it to the City Hall observation deck. The entrance is off of Main Street. We tried getting in via the north entrance, only to have to walk back around to Main Street (the south entrance). Above, the lobby rotunda. 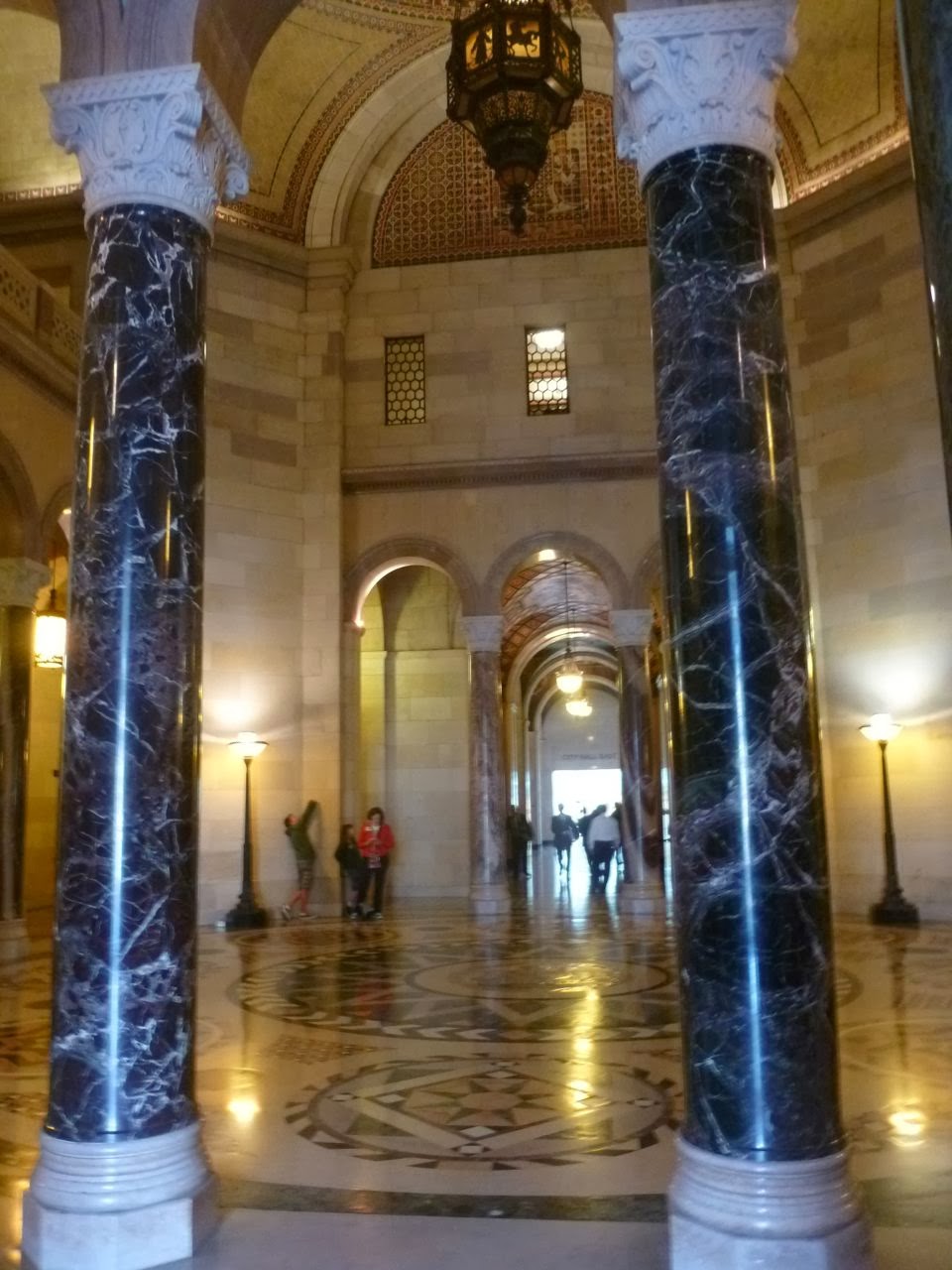 Another view of the lobby rotunda. We took a couple of minutes to look around, admire the architecture, and then took the two elevators to the 27th floor. Good, not great views, of downtown. It was a little hazy. On a clearer day the views would be outstanding. Above, the office towers of Bunker Hill.

At the lower left is the Los Angeles Times building, at the end of the Bunker Hill section of downtown. Bunker Hill was an old residential district that was re-zoned for high rises in the late 1950's. The first high rises were completed in 1968. What's shocking is that 45 years later there are razed parts of Bunker Hill still waiting development. 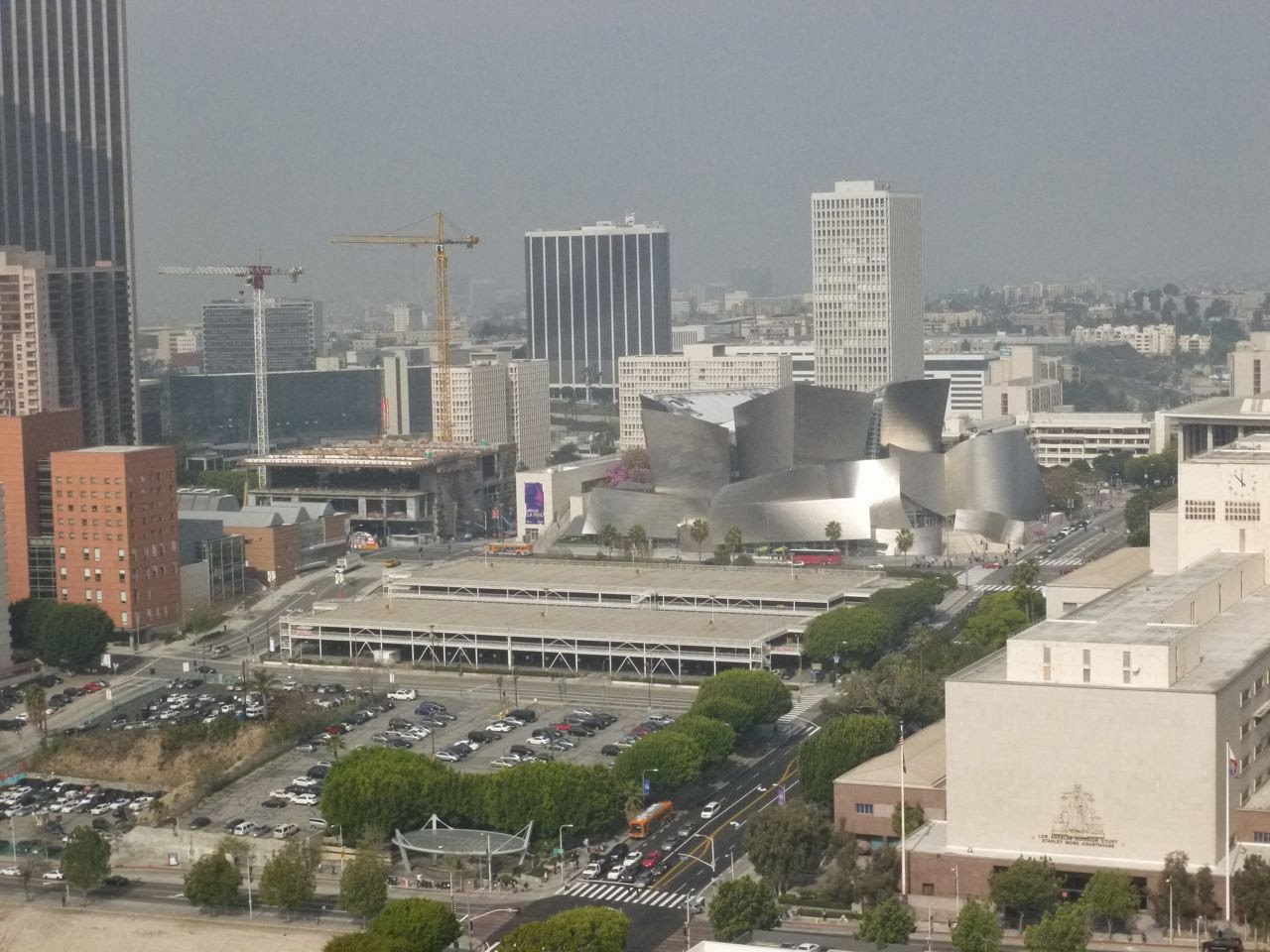 The Walt Disney Concert Hall. To the left, the construction cranes of the new Broad Museum of Contemporary Art, scheduled to open in 2015.

In front of the Walt Disney Concert Hall is what was originally planned as a "temporary" parking structure. It's been around for almost fifty years. Apparently, this ugly structure will finally be getting replaced with a office and residential development. Here's a link to a previous post with more information.

Another view of the Walt Disney Concert Hall. Our family attended a free concert when we lived in Los Angeles. There was another one in September of 2013, so apparently this happens now and again.

The three block area between City Hall and the Department of Water and Power Building in the distance is called Grand Park, taking it's name from it's north most boarder: Grand Avenue.

You can see City Hall's shadow on the lawn out front. Those little pink things are chairs.

Grand Park opened in July 2012, and I was curious to see what it looked like.

We crossed the street and walked over to take a look.

The large lawn and planters were fine in the first two blocks - but for our kids the real draw was the massive fountain at the north end of the park.

Here's a wikipedia photo - this one of Grand Park at night. Pretty sparkly.

The large fountain was part of the original Civic Center Plaza. I remember seeing it when my family first moved to Los Angeles back in 1968. Some of the smaller "children's fountains" were added as part of the transformation of this area into Grand Park.

As my kids had fun playing in the fountain, I noticed a couple of statues on the sides of the Los Angeles County buildings. Historic figures who have influenced the foundation of American law: Moses - with the Ten Commandments ...

... and Thomas Jefferson - with the Declaration of Independence.

As a Christian, I don't believe it's the role of the government to give special preference my - or any other - faith. I certainly don't believe that the United States was founded as a "Christian nation" (I'm not even sure what that means). As the grandson of European immigrants, I'm extremely thankful for the First Amendment.

Jefferson's 1802 letter to a group of Connecticut Baptists describing the seperation of church and state certainly didn't mean of the separation of faith from public life. Many of the Founding Fathers were religious, and our the laws of our nation were influenced by both Jewish and Christian thought. What some have called a "Judeo-Christian world-view." So, in terms of a historic understanding of the foundation of the American legal system, does Moses belong alongside Jefferson? Absolutely.

Here's a few thoughts on a previous post on displays of faith in public spaces. Much more could be written on this subject. That'll have wait for another day.

We walked across Grand Avenue to see the fountain in front of the Dorthy Chandler Pavilion at the Music Center. 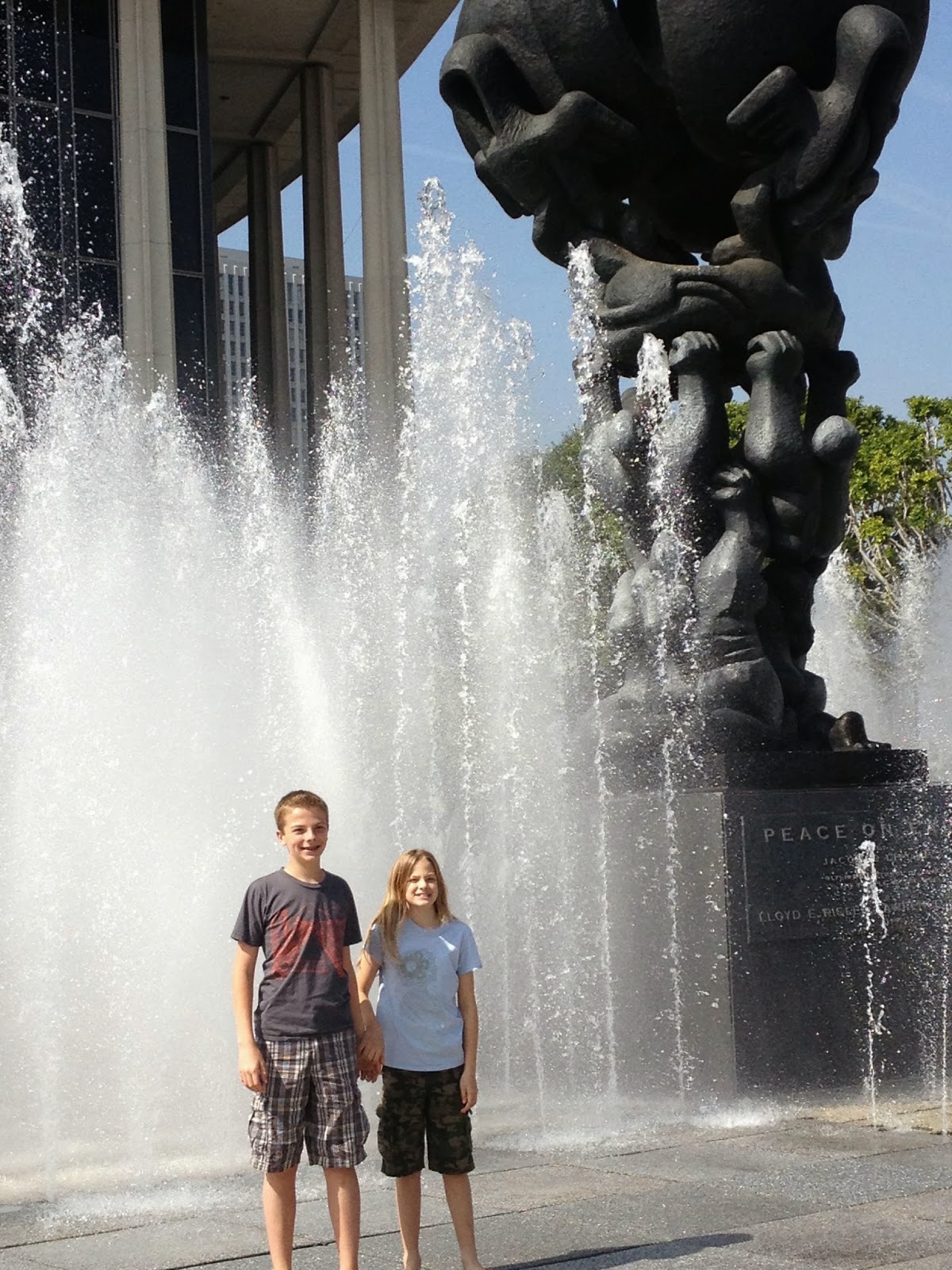 My kids had a blast running through the fountains - that is, until the security guard came by and told them they had to stop. Bummer.

They went back down to Grand Park ... no guard, no rules against running through the (smaller) fountains. Actually, that's what they were designed for.

Meanwhile, I wondered over to the Department of Water and Power's Building, to catch this photo of artwork, with the Walt Disney Concert Hall in the background. 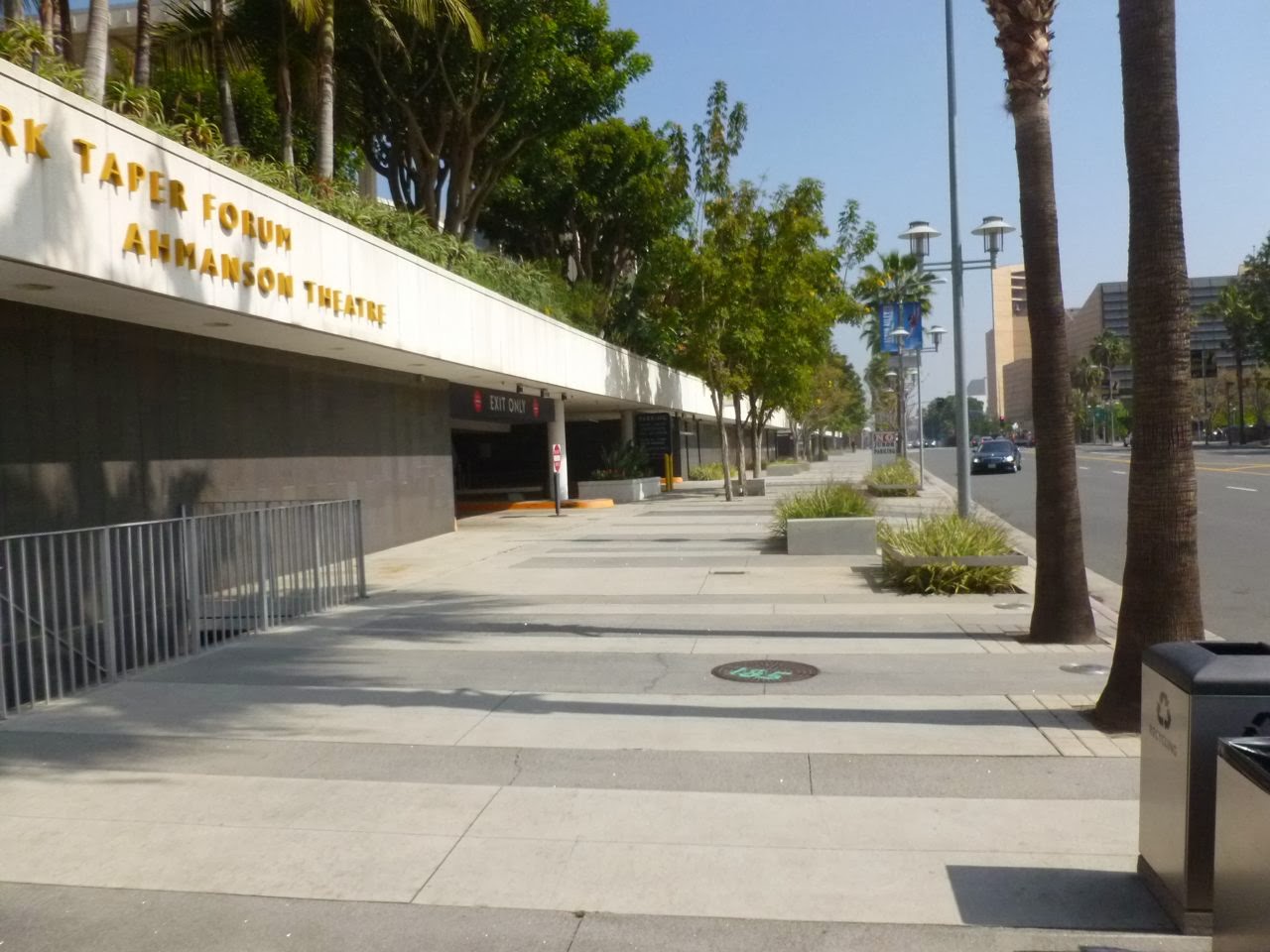 This is looking north up Grand Avenue. Much of the Bunker Hill district of Downtown Los Angeles is like this. Wide sidewalks - empty of life and people. There's no stores, no restaurants, no retail, no reason to walk along these streets. That was done on purpose. In the 1950's and 60's this was "forward thinking." Fast forward 50+ years and you wonder "what were they thinking?"

This was the thinking of the time - which ended up killing off all pedestrian life from this part of downtown. What a contrast to the older parts of Downtown (Main Street, Spring Street, Broadway) that are currently experiencing a radical transformation. Over the past ten years, 50,000 mostly young professionals have moved into the Historic Core of Downtown Los Angeles to experience a much more traditional - much more vibrant - urban experience. More on that in a future post. 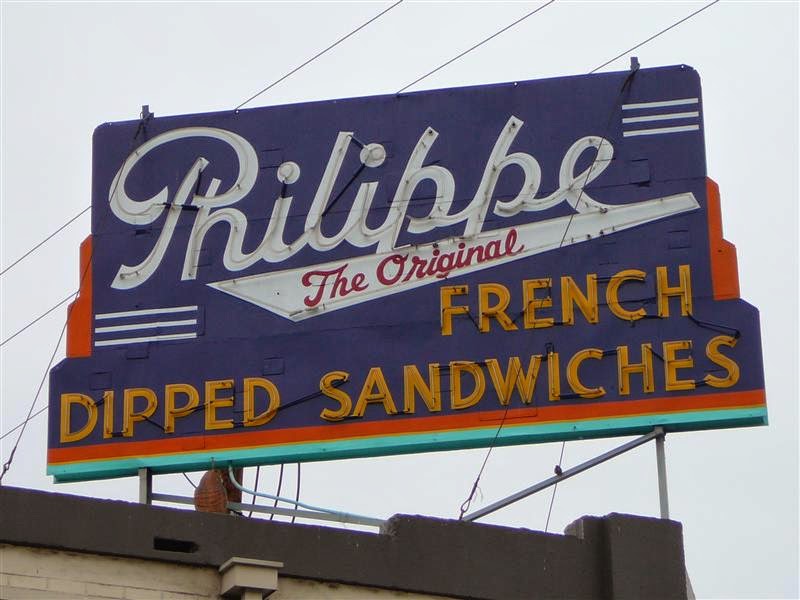 We took a DASH shuttle from Grand Park (also know as the Civic Center) a few blocks north to Philippe's, across the street from Union Station.

Ever had a French Dip Sandwich? Philippe's lays claim to the inventor of the French Dip.

The good people at Cole's, also located Downtown, disputes that claim, saying that they are the first to come up with French Dip. Either way, the French Dip was first introduced in Los Angeles.

Philippe's is awesome - and a MUST SEE if you're in Downtown Los Angeles, or anywhere near by. You really feel like you're stepping back to another period of history. And - YES - incredibly, they have free parking. Here's a link from a previous visit. 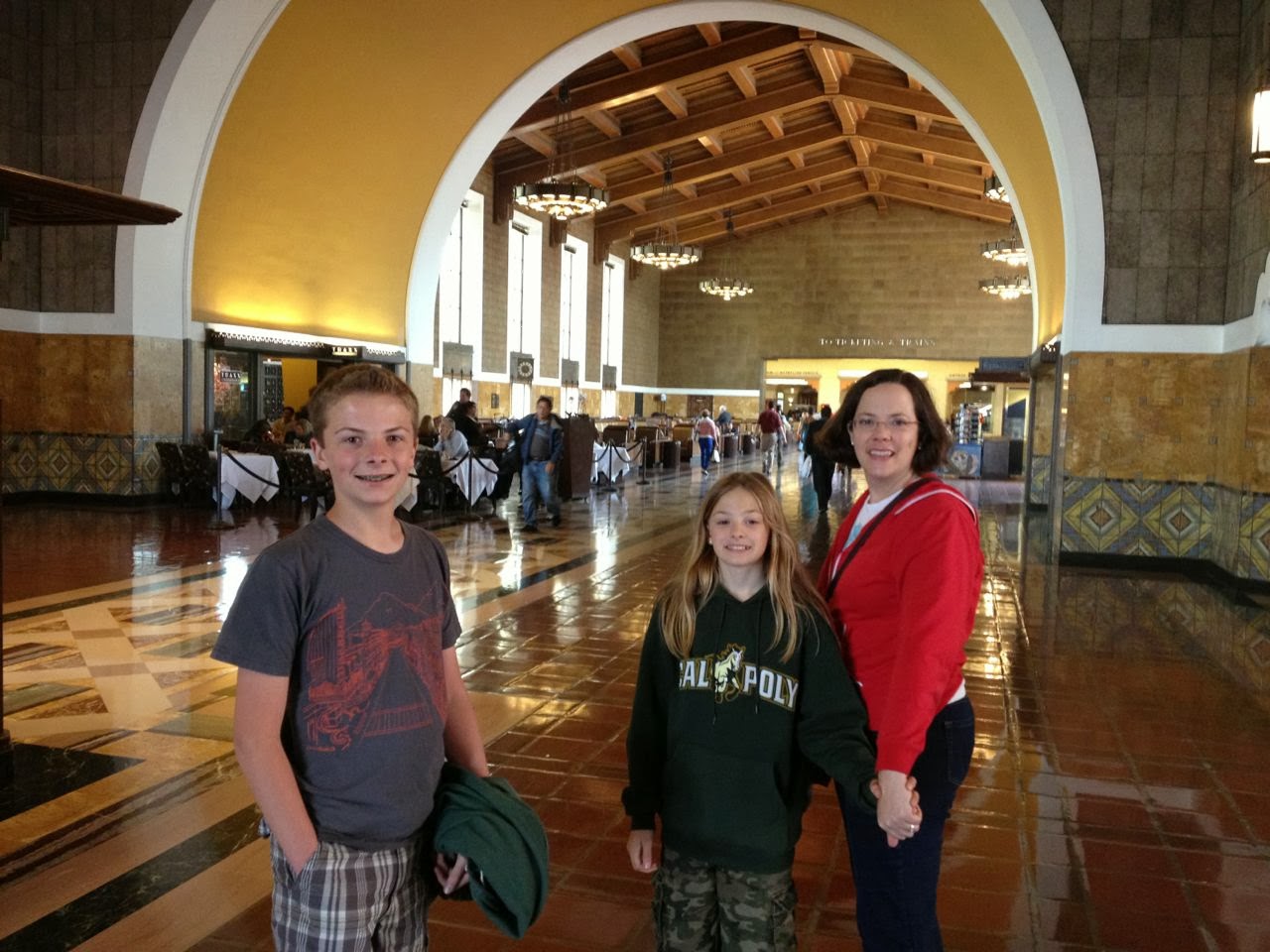 After lunch we walked across the street to Union Station, catching the Red Line subway, and then the Expo Line light rail to see the Endeavour Space Shuttle a few miles away at the California Science Center.

More on that next week!