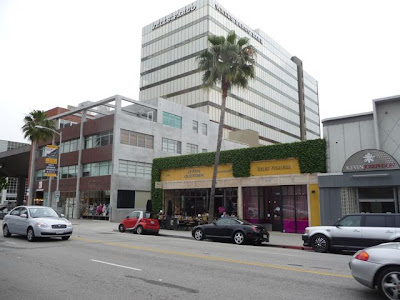 This is Part II or a three part series on Century City and Beverly Hills. Click here for last week's post.

My wife and I were back in Los Angeles earlier last year. After breakfast at Nosh Deli, we continued walking along South Santa Monica Blvd. This is a fairly typical street scene between Bedford and Camden Drive. 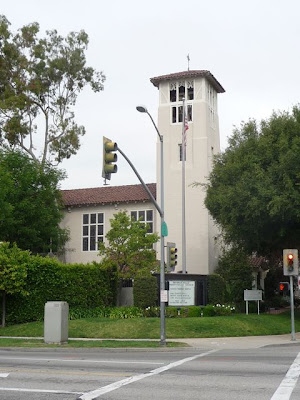 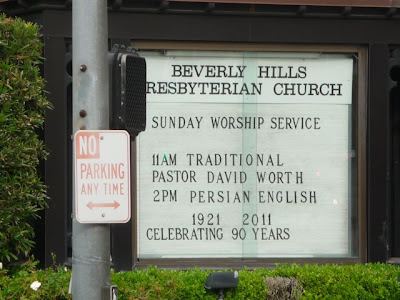 Here's a link to a previous post on "Terhangeles" - the nickname given to the Persian-American community in metro Los Angeles. 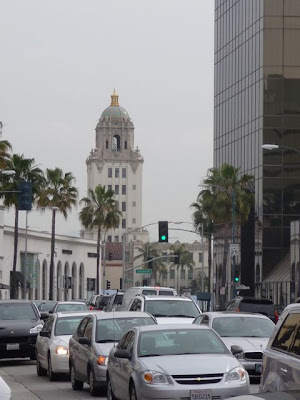 In the distance through the sea of traffic is the Beverly Hills City Hall. Beautiful building. Just a few blocks is the famous William Pereira "Googie" style gas station (with a link to a previous blog post). 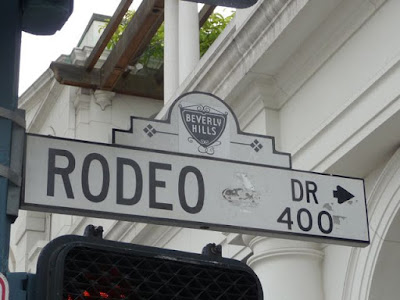 Ah, Rodeo Drive. For better or for worse, the three blocks of Rodeo Drive between Santa Monica Blvd and Wilshire Blvd is one of the most famous streets in Los Angeles, perhaps the world. By the way, it's pronounced "roh-DAY-oh". 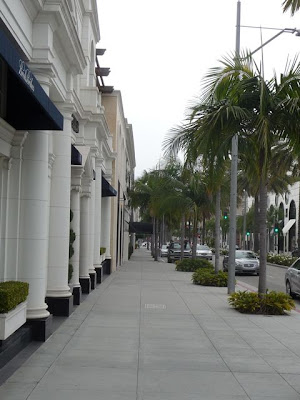 It was still early and most (if not all) the shops were still closed. Zero foot traffic. 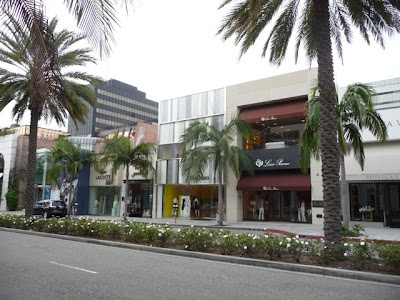 According to the official website, Rodeo Drive is "the epicenter of luxury fashion" featuring "more than 100 world-reowned boutiques and hotels." 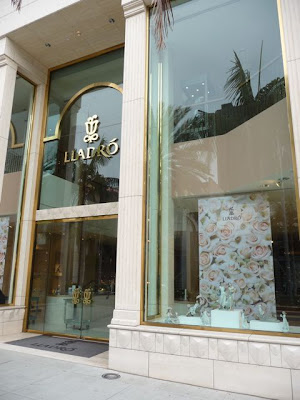 Most everything here was neither my style, taste, or within my price range. 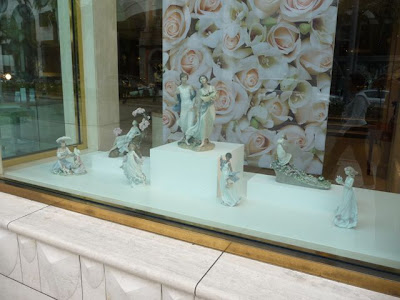 Llardo features porcelain figures. The kind of thing my grandmother liked. Prices range from $500 (what you see here) to $25,000 for their really high end stuff. 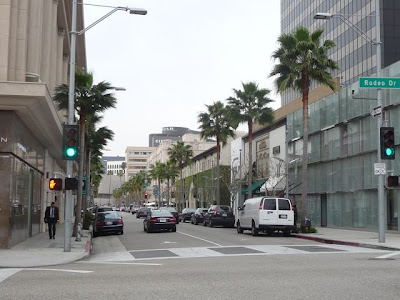 Looking southwest down Brighton Way. Rodeo Drive runs parrell to about a dozen other streets that make up the Beverly Hills commercial district. 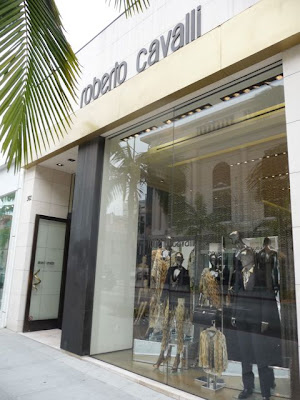 Roberto Cavalli. No, I had never heard of it before. According to a couple of yelp reviewers, dresses start at $2000; a pair of briefs will set you back $180. 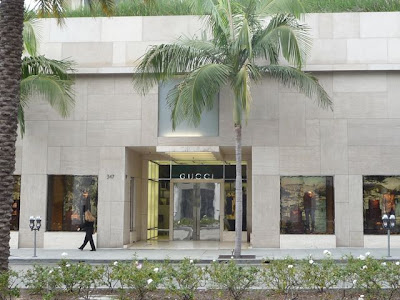 Gucci. Yes, heard of this before. I suppose there's nothing wrong with paying extra for something made well (i.e. quality) but "designer" seesm like just adding another zero the price. Maybe that's the point ... 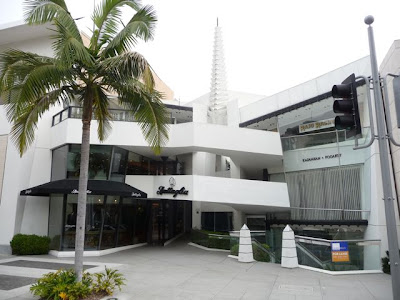 Rodeo Drive's version of a mini-mall. Only here you're not going to find a 7/11 or dounut shop. 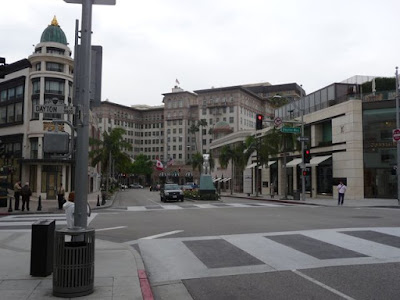 At the end of the street, the Beverly Wilshire Hotel, featured in numerous films including Pretty Woman. Rooms (off season) start at $550 a night. Nice looking place, but not even close to what I'm used to paying for a hotel room. 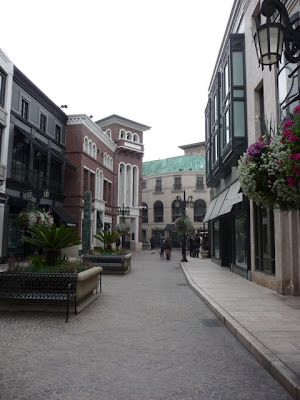 The corner of Wilshire Blvd & Rodeo Drive is a small, but very high-end, outdoor shopping center known as "2 Rodeo".

I like what one Yelp reviewer said: "I can't write about Rodeo Drive without mentioning Bijon, known as one of the most expensive stores in the world. By appointment only (and the appointments cost a lot of money). Inside, suits for men start at $50,000. Several wealthy and powerful men own Bijan suits including Barack Obama, Bill Clinton, and Michael Jordan." 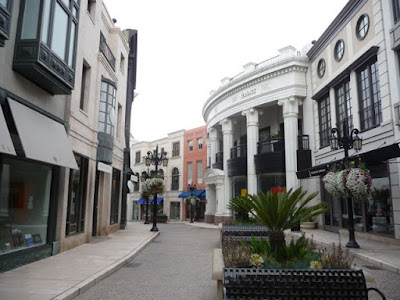 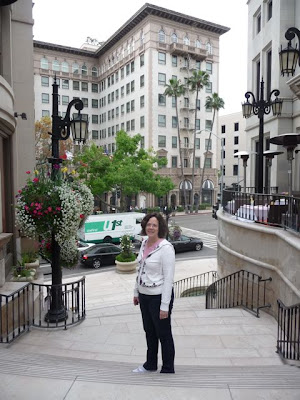 Their version of the "Spanish Steps," with the Beverly Wilshire across the street. 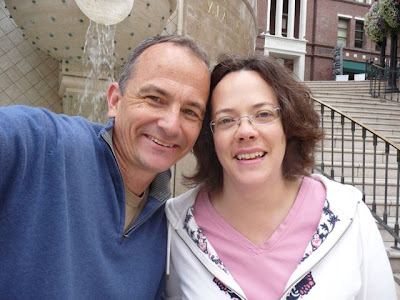 I took my wife here on a date here twenty years earlier when she first moved to Los Angeles (and I was living in Orange County). Nice spot to grab a picture - and then move along.

After three blocks of Rodeo Drive, we cross the street and walked through the lobby of the Beverly Wilshire. More on that in Part III next week.