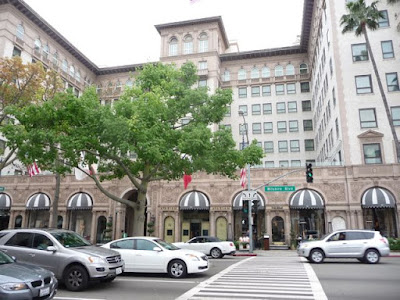 This is Part III on a three part series on a walk my wife and I took through Century City and Beverly Hills earlier last year (click here for links to Part I and Part II).

Pictured above: the Beverly Wilshire Hotel. One of the areas top hotels. Four stars - with prices to match. Off-season rates start at $550 a night (meaning my family and I won't be staying there anytime soon). It's the location of numerous films, including Pretty Woman and Beverly Hills Cop. 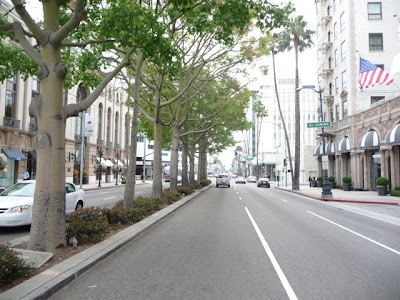 Crossing Wilshire Blvd. and looking east. Beverly Hills is an independent city, separate from the City of Los Angeles, located midway between Downtown Los Angeles and the beach at Santa Monica. Here's a link to a previous post on walking along Wilshire along this section of Beverly Hills. 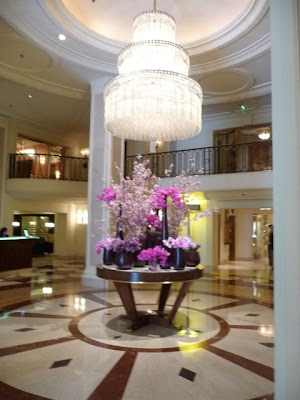 Lobby inside the Beverly Wilshire. 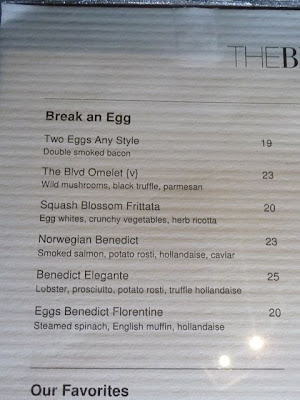 Checked out the menu at the on-site restaurant. Prices match the room rates. 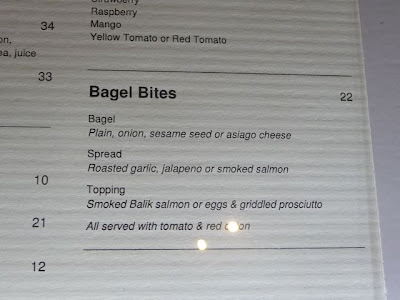 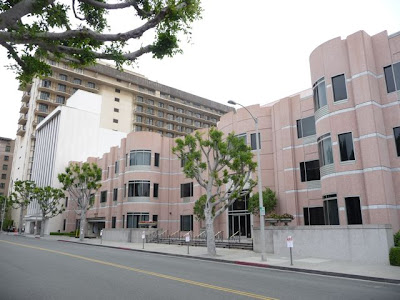 The backside of the Beverly Wilshire, with a smaller commercial building in the foreground. Another block south, Rodeo Drive becomes residential district. 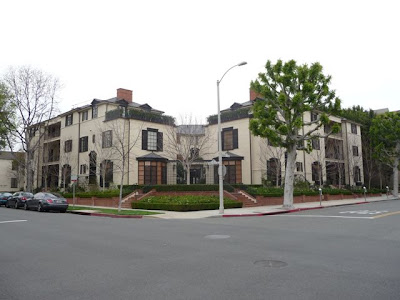 This small complex on the corner of Rodeo Drive and Charleville Drive seems so very typical of apartment buildings in Beverly Hills. Growing up in Los Angeles, I had cousins who lived in something very similar.

As an aside, I remember my cousin saying how she "had to get out of L.A."

I've heard similar statements, but for my cousin, it wasn't because life in L.A. was too fast - it was too slow.

Where did she end up moving to? 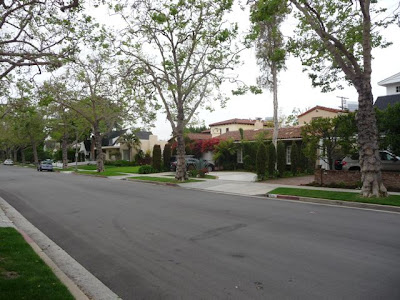 Rodeo Drive south of Wilshire Blvd is in a quiet, residential neighborhood. This is in between Charleville Drive and Olympic Blvd. 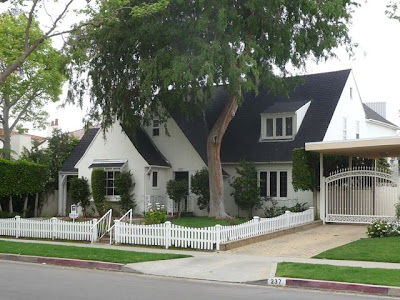 Attractive, yet in many ways modest, homes - at least by "Beverly Hills" standards. This looks like what you'd find in a suburban neighborhood on the East Coast, or in Midwest.

If you're looking for the big fat-daddy mansions that Beverly Hills is famous for, they start north of Santa Monica Blvd, with even larger estates north of Sunset Blvd.

My wife and I jokingly refer to those massive homes as "bigger barns" - a reference to Jesus' words in Luke 12:18. (As an aside, we've wondered if our current 1700 tract house is actually a "bigger barn.") 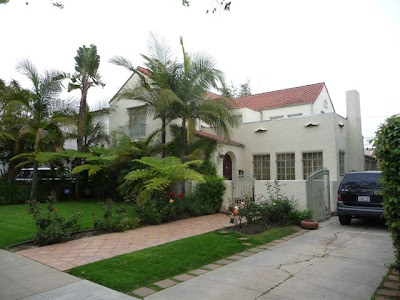 Another home on the same street. The beautiful palm trees and ferns certainly say "Southern California." 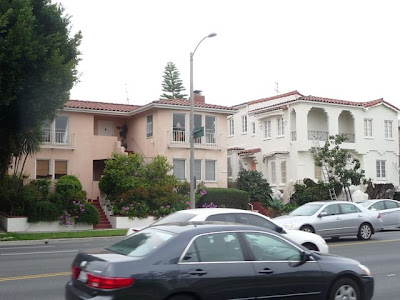 Olympic Blvd (named during the 1932 Los Angeles Summer Olympics) is near the southern edge of Beverly Hills. Along the street are numerous two story apartment buildings. 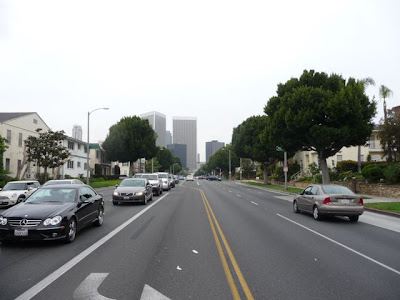 Looking west along Olympic Blvd with the towers of Century City a mile away. Kind of looks like a google maps image, non? 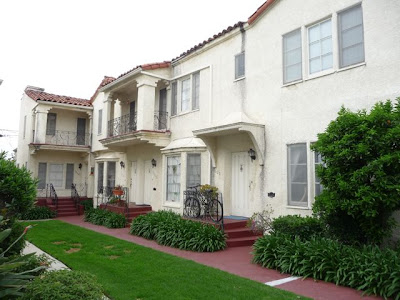 Not everything in Beverly Hills is gold platted. The buildings along Olympic look like they were built in the 1920's or 1930's. While most were in good shape, a few were in need of some love (or at least some paint). I have friends who are graduate students at UCLA, living in Beverly Hills in a building similar to this. 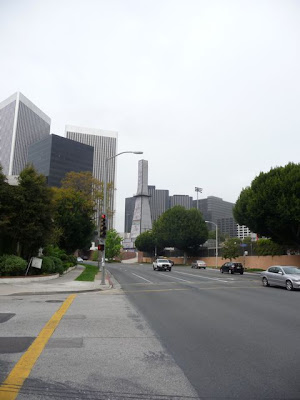 Up ahead, Century City to the left, and Beverly Hills High School to the right. 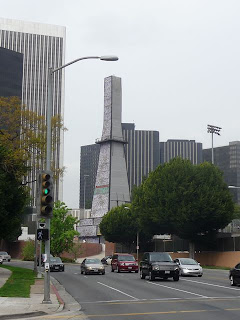 That funky tower is actually an oil derrick. It's actually drilling under the school. Who knew? How come this never shows up in 90210? 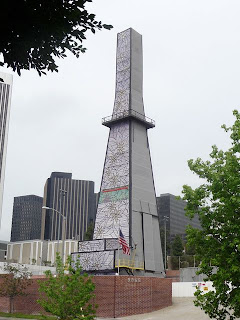 Another view. There is actually a small oil field around the southern edge of Beverly Hills, and the Pico/Robertson neighborhood (within the city of Los Angeles).

Below is a map of the "Beverly Hills Oil Field," which roughly parallels Olympic and Pico Blvds. Think Jed Clampette (anyone remember him?) would have been proud. Click on the image for a larger view. 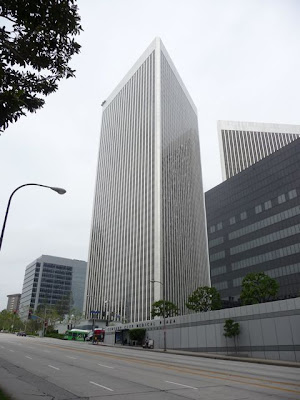 Coming up on the Century Plaza Towers. Small by, say, New York or Chicago standards, but looming large over the westside of Los Angeles. 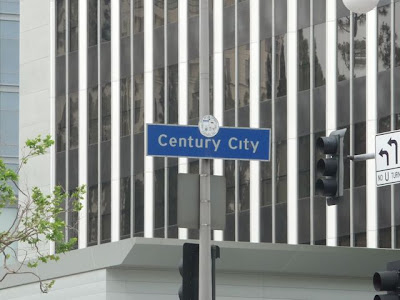 As stated previously, Century City is a neighborhood within the City of Los Angeles. Here's a link to a previous post on what is - and what's not - within the Los Angeles city limits. 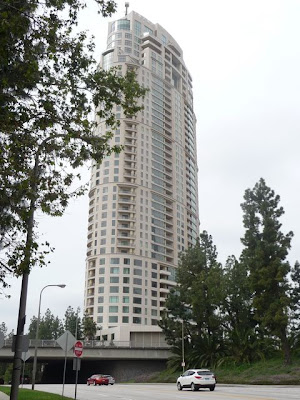 Final view of of "The Century" condo tower. As noted in Part I, the top unit going for $35 million dollars. Wow: pretty big (and pretty expensive) barn.

A final map of the loop of our little walk.