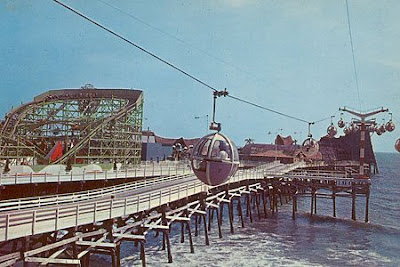 I was jealous of my friends from elementary school who had been able to experience POP before it closed. To a seven year old boy, it sounded amazing. 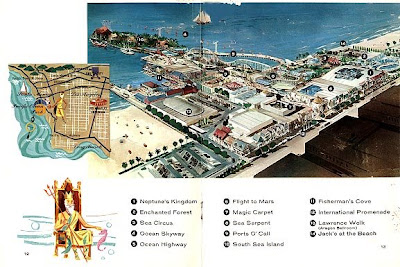 Here's a map showing the size and layout of POP from a souvenir brochure. 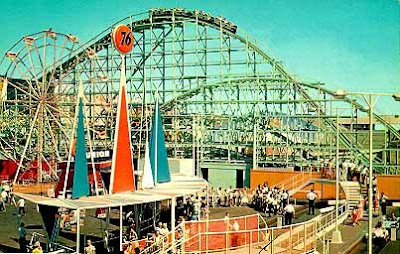 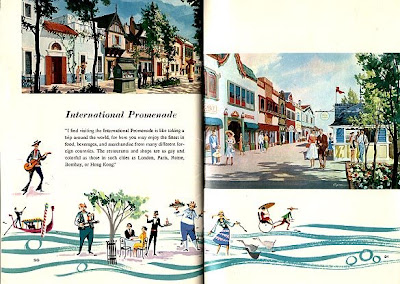 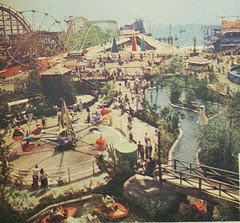 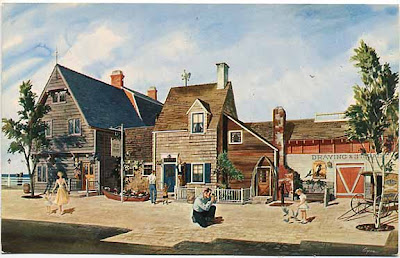 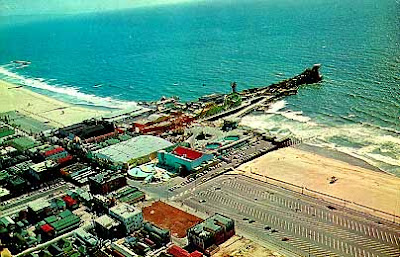 a final aerial photo of POP and surrounding community
A couple summers ago, I was with my own kids at the beach at Ocean Park and realized that we were standing just a few feet from where this huge seaside amusement park once stood. It's not as if there is something "better" in it's place - today, it's just beach and parking lot. Kind of sad. POP was actually owned by CBS - several of their TV shows were filmed there, including an episode of the old "Get Smart" series. POP closed in Fall of 1967. The photo below is very similar to the view we had from our home: POP closed but still intact. 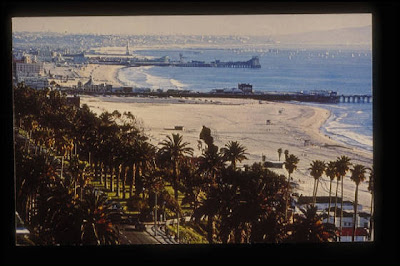 It took several more years for fires to finally destroy it. The remaining debris and pier pilings were removed in the mid '70's. 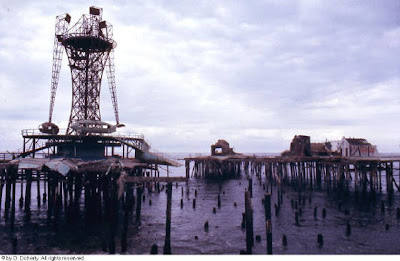 I found the website: http://pacificoceanpark.tripod.com/ really helpful in terms of information on POP - and these photos. I also really enjoyed the book Venice California 'Coney Island of the Pacific' by Jeffrey Stanton (it's available for loan in the L.A. Public Library system). It's simply incredible to think 1/10th of the current population of Los Angeles was able to support three large amusement piers within a couple miles of each other. 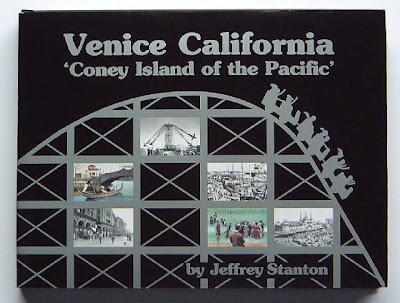 Looking out to where POP once stood and seeing nothing but empty beach, I'm reminded of our own very brief lives and James 4:13&14- "Now listen, you who say, "Today or tomorrow we will go to this or that city, spend a year there, carry on business and make money." Why, you do not even know what will happen tomorrow. What is your life? You are a mist that appears for a little while and then vanishes"
(originally posted 5/11/08)
© 2010 www.experiencingla.com
.
Posted by David from L.A. at Saturday, May 22, 2010

I was one of the fortunate ones who lived the life. I was 14 when POP opened.
Mom would drive me and my brother to a real wonderland just 15 minutes from home. With 25 cents each for lunch and the emergency dime in my shoe we were dropped off and another day at the beach would begin.
We would go about 2-3 times a month. Sometimes with friends from school.
About 2years in it went from Pacifac Ocean Park to Pay One Price. For $1.99 you would get in and all the rides were free!!. It was great. But that wasn't good enough, we were able to find the catwalks under the pier and follow them to various hidden entrance places and get in for free. I've been on all of those rides, knew a lot of the people that worked there and they knew me and my brother. Great memories !!.
I was really sad to see it go. Especially the The way the city of Los Angeles did it. They let crumble over years instead of just ripping it down. It was a slow death for such a good friend.

@ Slip to - thanks for the comment and sharing your memories! My own kids (now ages 16 and 14) enjoyed the "Pacific Park" amusement area at the Santa Monica Pier ... but it's a shadow of what POP was.