Is Los Angeles the "car capital of the world"? L.A. can arm wrestle Detroit for that title, but automobiles have certainly shaped the culture, growth, and design of Los Angeles. So it's no surprise that the city is home to one of the largest automobile museums in the world, the Petersen Automotive Museum. 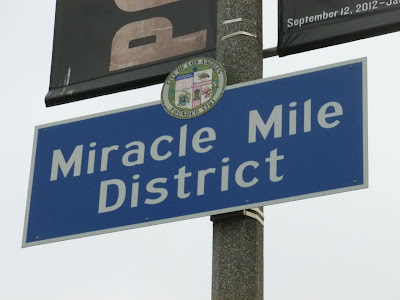 The Petersen is located on the western edge of the Miracle Mile District, on the corner of Wilshire Boulevard and Fairfax Avenue. 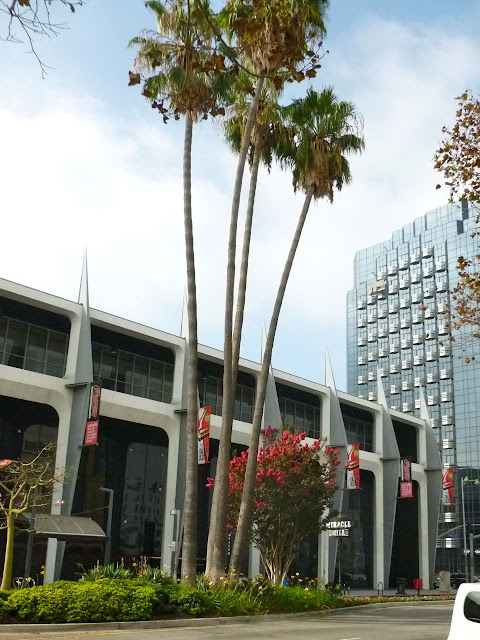 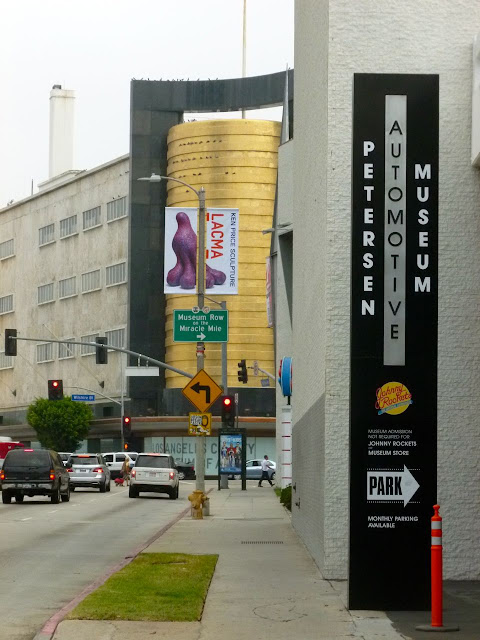 What does Los Angeles do with it's old department stores? Turns them into museums. The entrance to the Petersen is off of Fairfax. Across Wilshire, you can see the gold corner of the former May Company Department Store, now part of the Los Angeles County Museum of Art (LACMA). More on that in a bit. 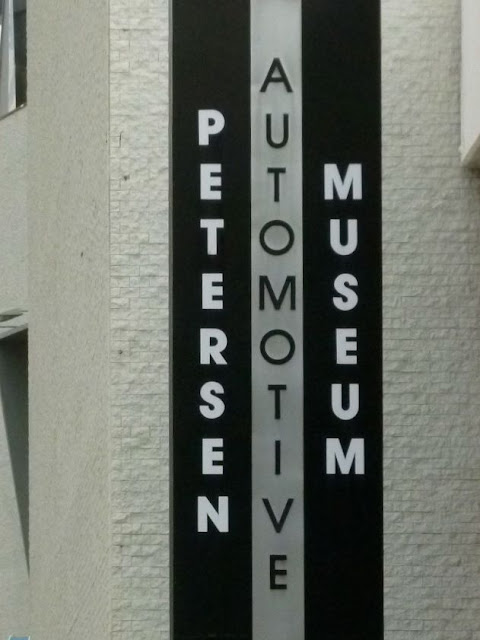 A closeup of the entrance sign. Let's head on in. 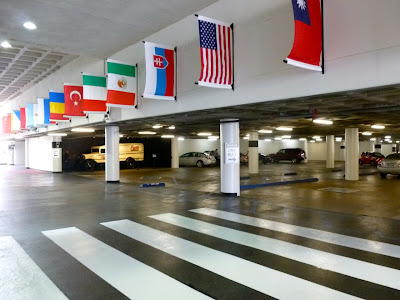 Parking is o the right - the entrance is to the left. Parking is $12 (about normal for Los Angeles). There is also limited meter parking in the neighborhoods if you're only going to be there for a couple hours. 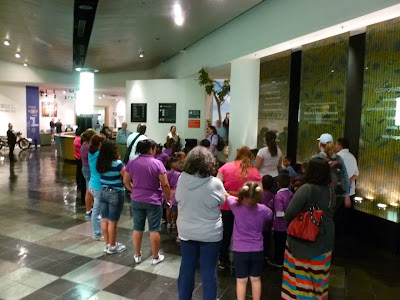 One of the many schools groups waiting to get in. The Petersen is a privately owned museum and receives no state or local funding.

They do a fantastic job opening up their facility to schools: public, private, and homeschool groups. Teachers, including homeschool educators, can get in for free. Nice.

They even have a their own bus to transport kids from under-served schools to the museum. 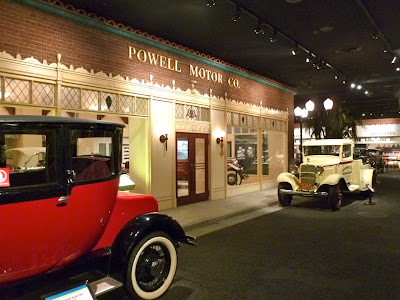 The first floor is dedicated to to the history of the automobile in Los Angeles, with permanent displays and wonderful period "streetscape" representing various periods of the 20th Century.

Here's a photo of the original Bulldog Cafe, located at 1153 West Washington Blvd in Los Angeles. This little roadside cafe was built in 1927 and - unfortunately - torn down in 1955. 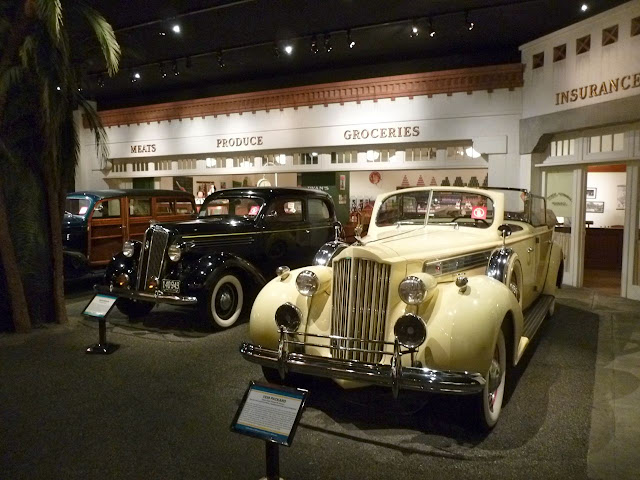 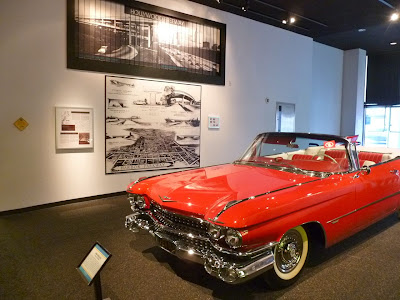 The displays move into the 1950's and 1960's - and advent of the Freeway - a development which changed Los Angeles forever. There's a lot more to see than I'm covering here. 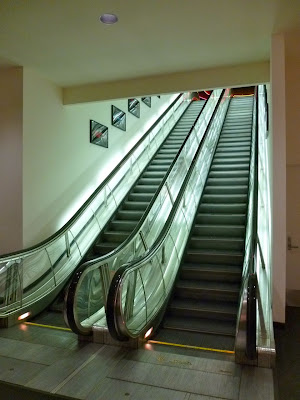 Upstairs is the museum's special and changing exhibits. I was here just a few minutes after the museum opened - normally, you'd see guests wandering about. 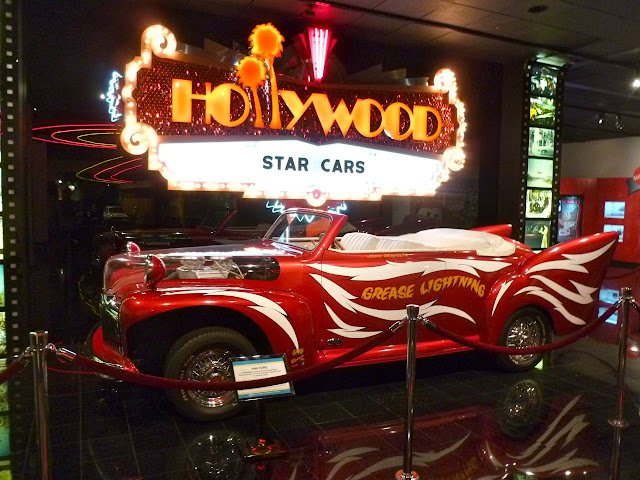 The Hollywood "Star Cars" section has vehicles from Batman, Bonnie & Clyde, The Green Hornet, and more. Above: "Grease Lighting" from the 1978 film Grease. 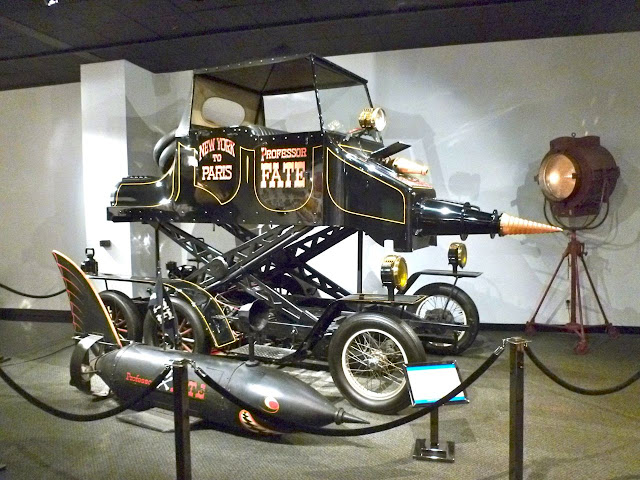 . . . and professor Fate's wacky "Hannibal Eight" from the 1965 comedy The Great Race. Again, there's a lot more to see than I'm posting here. 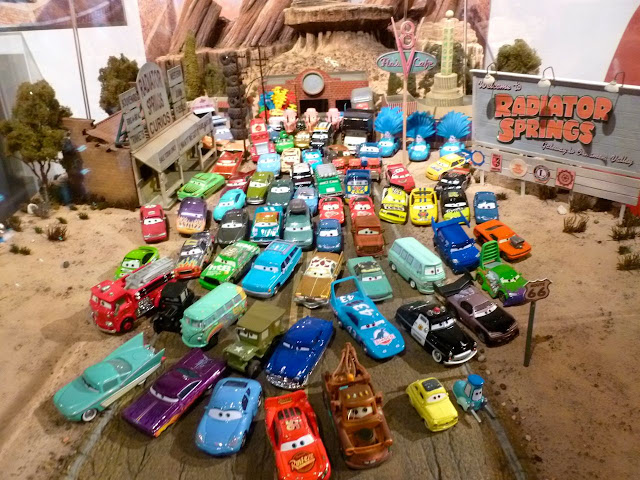 There's a couple of display cases with a collection of cars from the Disney/Pixar film "Cars." If you want to see more that a couple of little models, folks in Anaheim are happy to oblige, and have recently opened up a "Carsland" section at the California Adventure Park, next to Disneyland. 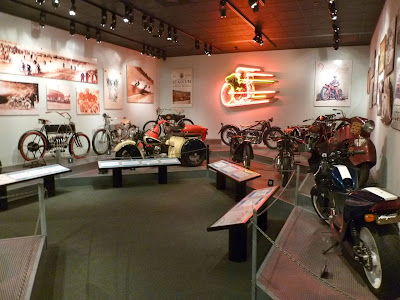 A selection of vintage motorcycles. Apparently, the Petersen only displays about half of 300 cars in their collection at any one time. The other half is down in the museum's basement, their "vault." 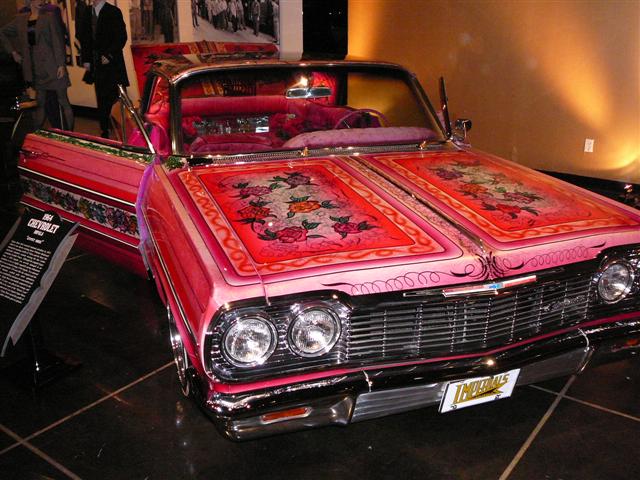 "Gypsy Rose" is actually from a previous visit a few years earlier. The car was one of several  on loan as part of the Petersen's La Vida Lowrider exhibit back in 2007-2008. It is such a great car - just had to repost this picture. 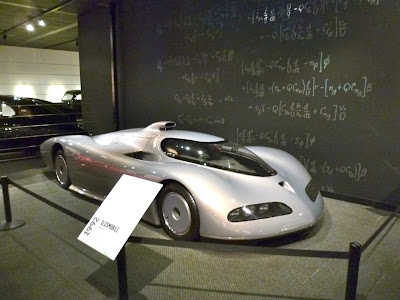 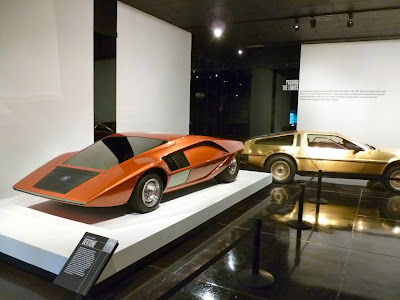 . . . including this solar panel car.

All in all, a great place for school field trips, for car buffs, or for anyone who wants to learn a bit more about how the automobile has shaped life in Southern California. 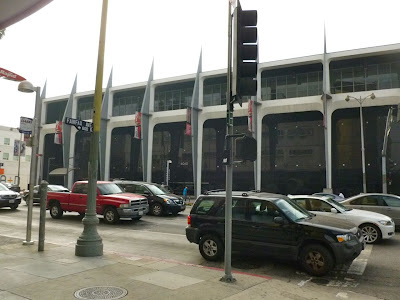 Back outside, here another view of the Petersen from across the street. Apparently, the museum is suffering from a lack of "brand identity." Despite the fact of being located on the third busiest intersection in Los Angeles, the majority of people driving by have no idea that a world class automotive museum is inside.

I wonder if a little "Roadside Vernacular Architecture" would help? You know, an updated version of the Bulldog cafe. Perhaps a giant fiberglass classic car on the roof?

Call it an advertisement, everyone'll hate it. Call it avant guard art, and everyone will wonder how they could have lived without it. 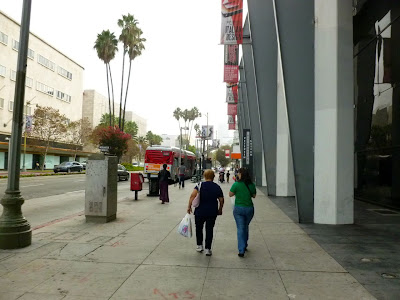 Or, maybe just putting a second entrance in off of Wilshire Blvd?

Above: a view in front of the museum looking east towards the Miracle Mile District. Los Angeles' Purple Line - the subway down Wilshire Blvd - has a stopped planned for the corner of Wilshire & Fairfax slated sometime in the next ten years. Ironically, it'll be a new subway stop that will give a huge boost to foot traffic, and museum attendance.

Here's a link to a previous blog post of a four mile walk along this section of Wilshire back in September 2009. 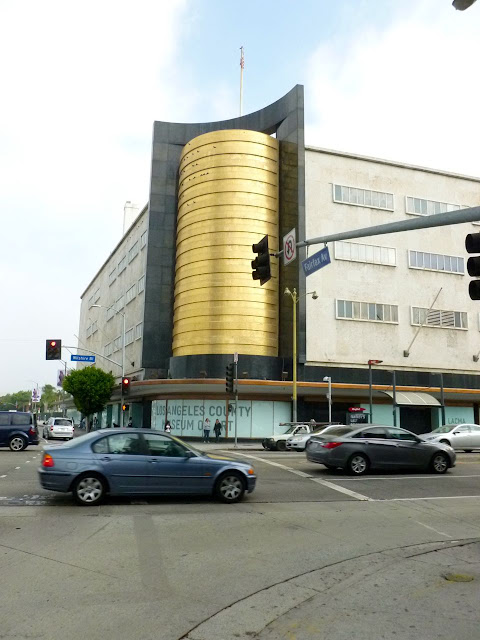 Across the street from the Petersen, another view of the old May Company Department Store, now part of the Los Angeles County Museum of Art - LACMA. 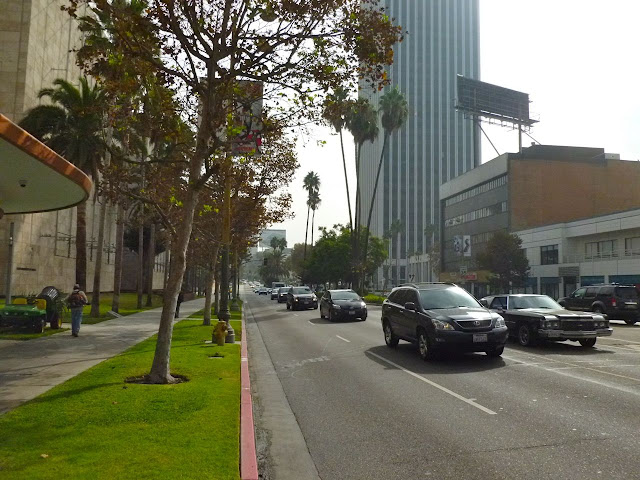 Another view looking east up Wilshire towards downtown. The Peterssen is across the street (out of view). The main entrance to LACMA is just to the left, featuring Chris Burden's Urban Light. Across the street, just in front of the large office tower, is the Wende Museum's The Wall on Wilshire, featuring the largest section of the Berlin Wall outside of Germany. Nearby is Michael Heizer's Levitated Mass, the La Brea Tar Pits ... as well as the Original Farmer's Market, and The Grove.

LACMA has just added an incredible art display that gives new meaning to the idea of this corner of L.A. being "carsland."

Above is Metropolis II - one of the most amazing, kinetic pieces of art in the world.

Designed by Chris Burden (who also gave us the Urban Light display out front), Metropolis II is an active, working model featuring 13 electric trains, 25 buildings and 1100 model cars whizzing along.

Click on this link for a fantastic two minute You Tube video.

It's operative on Fridays, Saturdays, and Sundays. I'd love to see it sometime in the future. 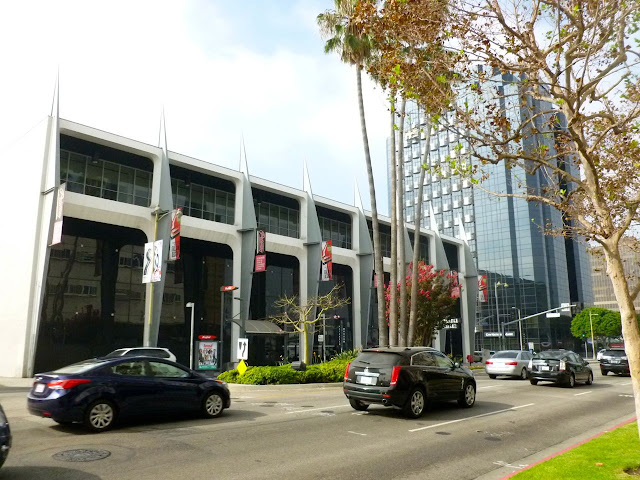 Back outside, here's a final view of the Petersen, and a link to the museum's website. 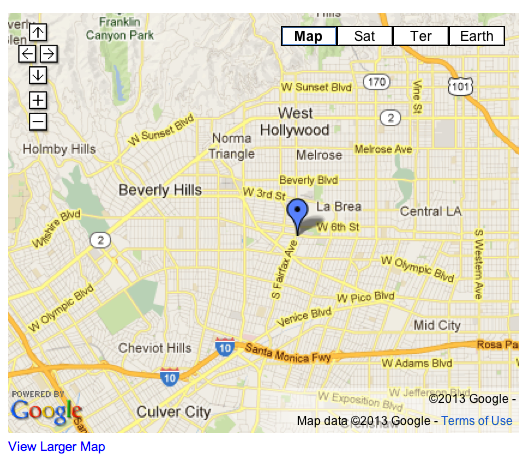