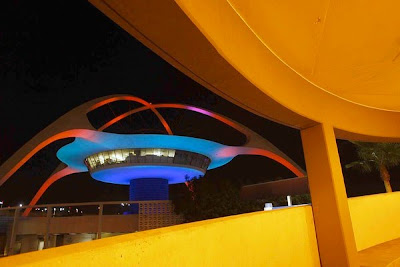 A couple years ago, this outstanding photo by Los Angeles Times photographer Genaro Molina caught my eye. I love the look and feel of the LAX Theme Building, especially at night. Add to that the way Molina framed it with the curves and color of an adjacent parking structure, and you've got a simply amazing photograph. I used it as the desktop background on my computer for several months. 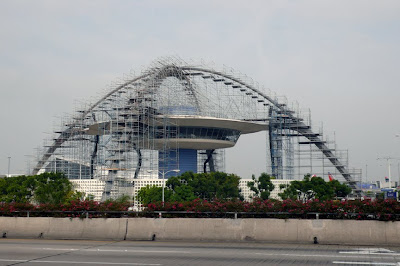 After a massive three year renovation that had it covered with scaffolding, the Theme Building re-opened in July 2010, just a few weeks before we moved out of the area. 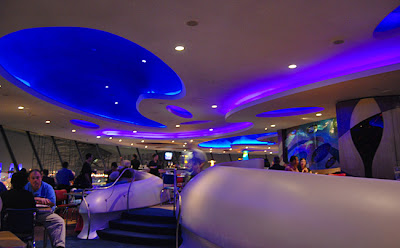 The Theme Building houses a "retro-future" restaurant called "Encounter". No, I personally haven't been inside. Yes, it's something I'd like to do in the future. 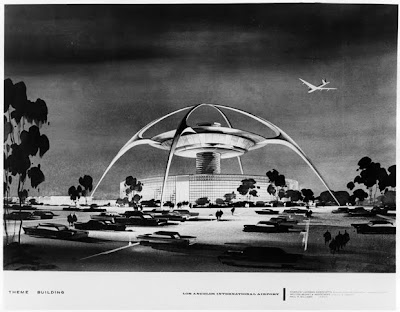 The Theme Building opened in 1961 and is one of Los Angeles' best examples of "googie" architecture (another is "Jack Colker's 76 Gas Station" located at Santa Monica Blvd & Crescent Drive in Beverly Hills), capturing the spirit and optimism of the jet age. And Encounter, which opened in 1997, was designed by the folks at Walt Disney Imagineering, giving it that fantasy futuristic feel.

The future hasn't turned out exactly the way people imagined it 50 years ago: cars are stuck in gridlock traffic, but we've got cell phones that surpass anything the original Star Trek series could have even imagined.

I'm curious what kind of world my future grandkids will live in 50 or so years from now. It's certainly the desire of my wife and I to equip our kids (now ages 13 and almost 11) to be able to engage the future - and to be able to pass on their faith and knowledge of God to their own children, and to their children's children. 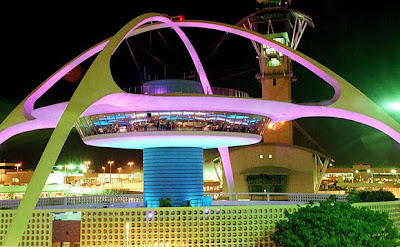 Here's some additional information on the Theme Building.