February 2011 my wife, kids and I got a chance to visit the Los Angeles Live Steamers railroad in Griffith Park. 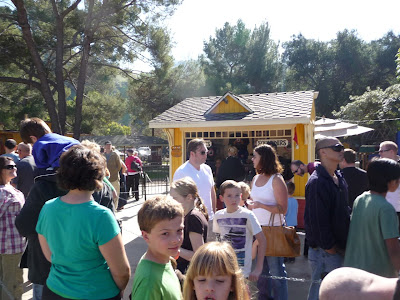 The L.A. Live Steamers is a non-profit volunteer organization of hobbyists, who open up their outdoor train layout to the public on Sundays. In contrast to the elaborate worlds of Disneyland, Universal Studios, and Six Flags Magic Mountain, it's a simple, yet refreshing, diversion.

While the layout originally consisted of "live steam" trains, it now includes diesel style locomotives. You sit on them, and they haul you around the track.

My kids and their cousins. Our in-laws left a couple of days after this to live semi-permanently overseas. This was part of a larger "good bye" weekend. We hit the California Science Center the day before. Fun - but also sad.

I LOVE this picture: my kids and their cousins, along with my wife and me. 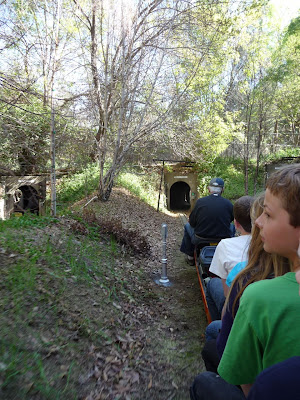 The train got going - and we were off.

"Live Steam" layouts are NOT unique to Los Angeles. They can be found all over the USA in public parks, and even in some people's backyards.

What is unique to the Los Angeles Live Steamers is one of their original charter members. Here's a hint (pictured below):

Can you see it? The little white sign says "Disney Tunnel."

Walt Disney was one of the charter members of the Los Angeles Live Steamers. Part of the track we were riding over was originally part of his backyard train layout. 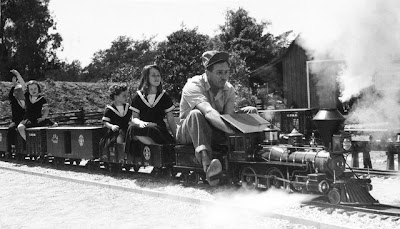 YES, Walt Disney actually had a similar layout in the backyard of his home in Los Angeles. A friend of mine from our church in Los Angeles got a chance to ride on his backyard train as a child. THAT would have been an amazing experience.

Here's a link with a layout map and several other photos. Notice the barn in the center of the photo? 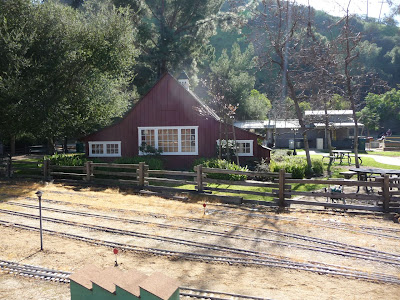 Here it is, today. In addition to the track, the Disney family eventually donated the barn that was part of the backyard layout. It was in this workshop that Walt Disney used to tinker with his steam trains . . . and dream of a little project called Disneyland. 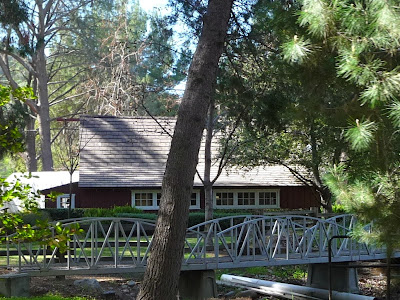 The barn is open to the public the third Sunday of the month, and we had a chance to visit it a few years before (subject of one of my very first blog posts).

Heading back into the station. Good memories. It's worth a visit, especially if you can also see the Walt Disney Barn.

Just a few minutes walk is Travel Town. Griffith Park has several other attractions, including the Los Angeles Zoo, The Autry National Center of the American West, and the Griffith Observatory. Click on any of these links for thoughts from some previous blog posts.

All part of experiencing L.A.

Here's a link to the Los Angeles Live Steamers' website.