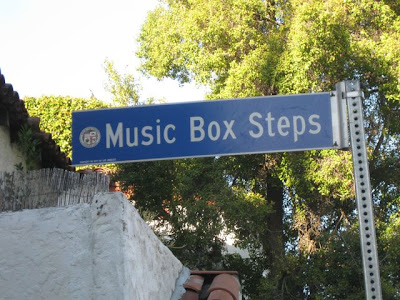 The Music Box Steps is a set of outdoor stairs in the Silverlake district of Los Angeles. The stairs were made famous by the Laurel and Hardy 1932 short film "The Music Box" in which the comic duo attemped to haul a piano up the impossibly long flight of stairs. 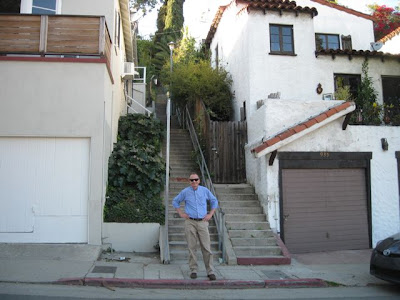 I was back in Los Angeles this time last year and in the area (here's a link to Part I from last week). I had heard about these stairs, but had never seen them. Pretty cool.

The stairs are located at 936 N. Vendome Street. - three blocks off of Sunset Blvd. (which is the main drag though Silverlake). 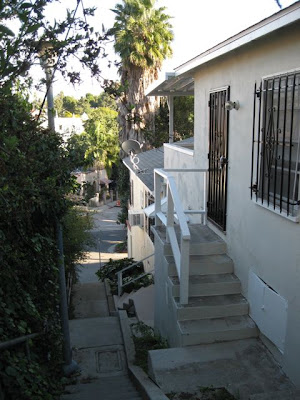 There are homes up and down the stairs. I honestly don't how these folks get in and out of their places - do they have to haul everything in and out by hand? A grocery run could be tricky, let alone moving your furniture in and out. Perhaps someone more famililar with this neighborhood could leave a comment. 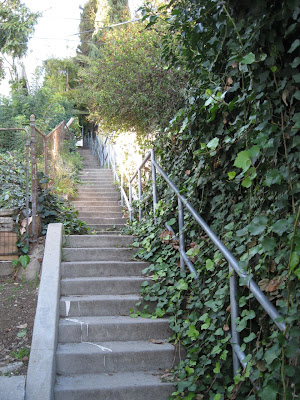 Lots of vegetation - think that's what's part of the appeal. Hard to believe I was in the middle of the second largest city in the U.S. 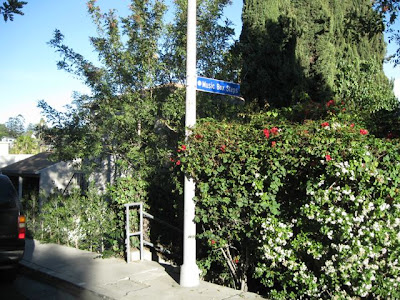 At the top: 3281 Descanco Drive. Turned around and headed back down. 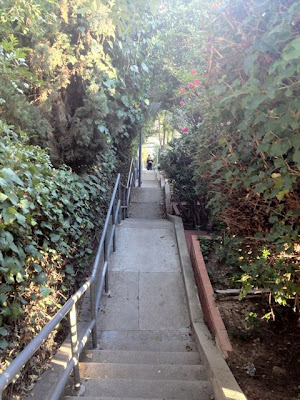 The steps were a nice workout. Apparenty, there are dozens of historic outdoor stair cases all around the Silverlake district. More on that in a bit. 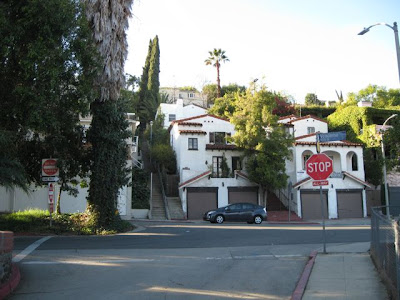 A view from the bottom. Across the street (and to my left) is a small neighborhood park appropirately named "Laurel and Hardy Park." Nice. 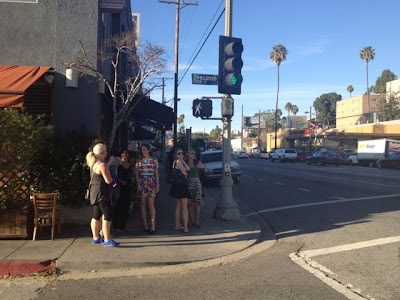 As I commented in the previous post, Silverlake is a neighborhood in transition - with a huge influx of urban (and primarly Anglo) hipsters moving into a working class Hispanic neighborhood.

As I walked back along Sunset Blvd, I wanted to asked these women "excuse me, are you hipster?" I actually think they were from out of the area, just visiting. Don't worry - I kept my mouth shut. 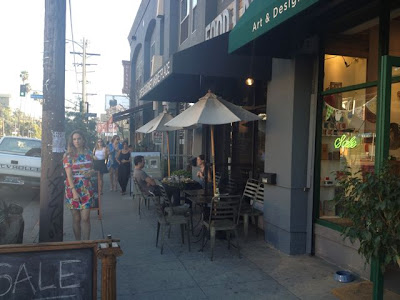 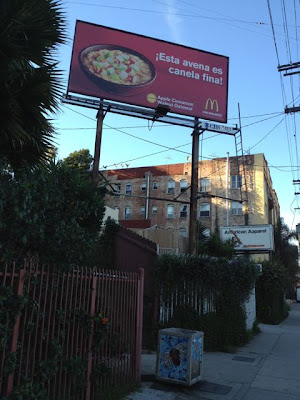 Next to Spanish language billboards for McDonalds = not very hipster, for at least a couple of different reasons. 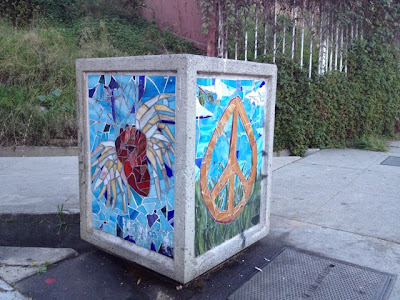 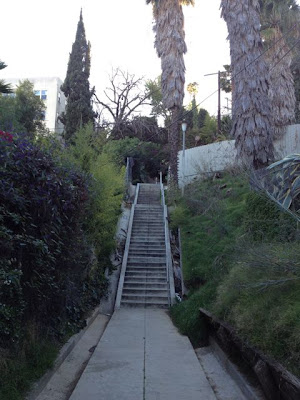 Another set of stairs - this one much shorter.

Here's a couple of links to some serious stair climbing opportunities in the Siverlake (and adjacent Echo Park) neighborhoods: 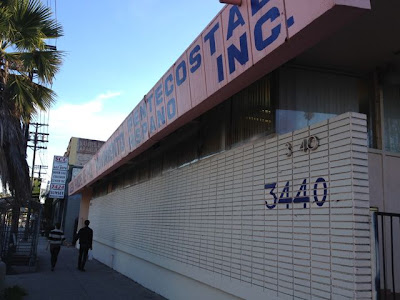 Back along Sunset Blvd, another Spanish language church. In much of Los Angeles, established English language churches are surrounded by more recent Spanish speaking residents. Looks like reverse is happening here in Silverlake.

I'm not at all familiar with this congreation, so I can't comment, but I am familar with an outstanding (English speaking) church less than three miles away that many of my friends in Los Angeles attend: "Reality L.A." - meeting Sundays at Helen Bernstein High School in Hollywoood. 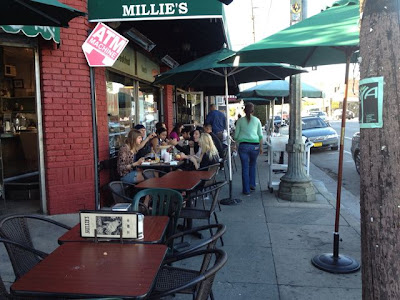 Continuing along Sunset Blvd, another outdoor cafe. This whole area is remniscent of Abott Kinney Blvd in Venice or Main Street in Santa Monica (both of which I've blogged about on this site). Felt like a page out of Christian Lander's "stuff white people like" blog. 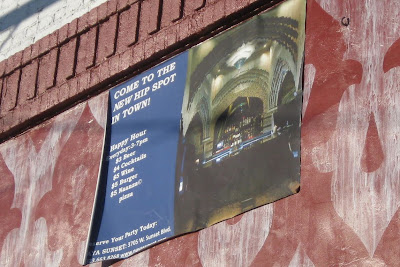 Someone needs to tell this Silverlake restaurant that it's very un-hip to advertise that you are hip. 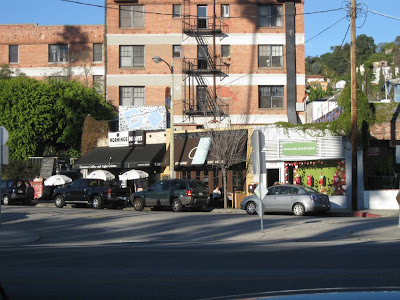 Another view across Sunset Blvd of "Cru" - the original reason I drove over to Silverlake. 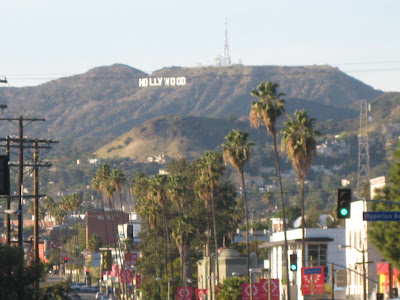 Looking west down Sunset Blvd with a nice view of the Hollywood Sign. The Silverlake district is located about halfway between downtown Los Angeles and Hollywood. 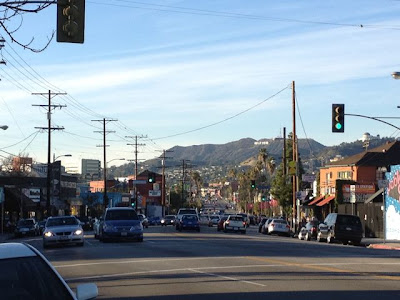 A final wide shot of the same view: Sunset Blvd with the Hollywood Sign in the distance.

View Silverlake in a larger map

What a great blog! Living in Miami and looking at this blog makes me miss my hometown!

Great blog! I attend Reality LA and it was nice to use this as a guide around the area for Sundays. Recently my show on youtube "Oddity Odysseys" explored the steps from "The Musix Box". Enjoy! https://www.youtube.com/watch?v=IsjQ8YTXXPE