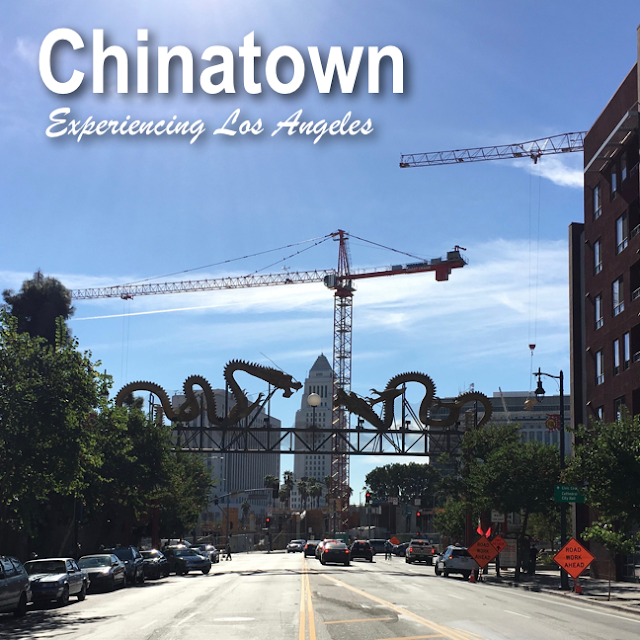 This time last year I was in Los Angeles, and took some time to explore Chinatown - located  a few blocks north of L.A.'s City Hall. 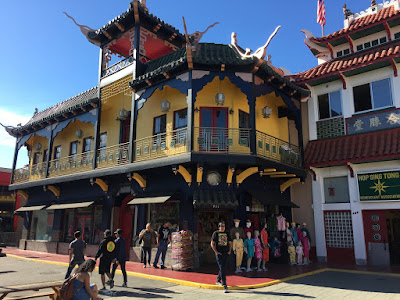 The heart of Chinatown is the Central Plaza, opened in 1938.

According this wikipedia article on Chinatown, "under the efforts of Chinese-American community leader Peter Soo Hoo Sr., the design and operational concepts for a New Chinatown evolved through a collective community process, resulting in a blend of Chinese and American architecture. The Los Angeles Chinatown saw major development, especially as a tourist attraction, throughout the 1930s, with the development of the "Central Plaza," a Hollywoodized version of Shanghai ... Chinatown was designed by Hollywood film set designers, and a "Chinese" movie prop was subsequently donated by film director Cecil B. DeMille." 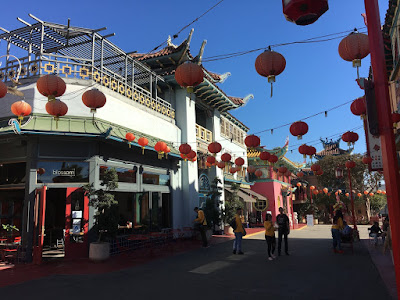 Here's a link from my last post, with some additional photos and thoughts on the historical Central Plaza. 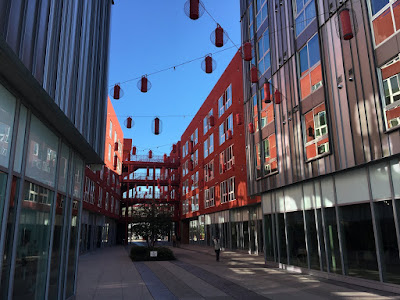 Outside the Central Plaza, there's a lot more to Chinatown, including this relatively new apartment complex off of Broadway. 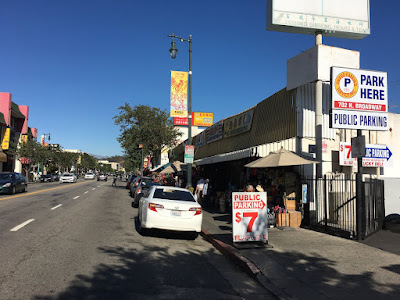 Most of Chinatown run along North Broadway, on the northern edge of Downtown Los Angeles. With it's long row of one and two story buildings, in so many ways, this could be almost anywhere in Los Angeles 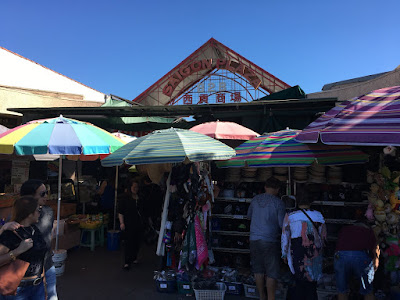 Saigon Plaza. Unlike the historic Central Plaza, this is place is TEEMING with people! 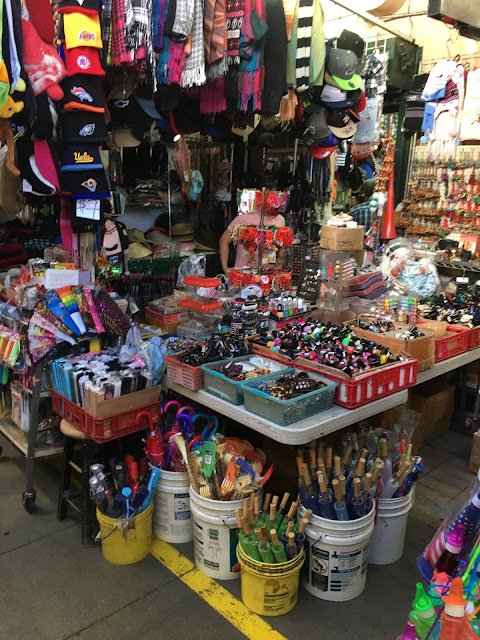 Apparently, Saigon Plaza is three stories - and is one of four informally connected shopping areas. Here's an interesting 2017 article from Los Angeles Times highlighting both the history and challenges these indoor swap meets are currently facing.

I'm not sure where the main entrance was (if there was one). I just sort of wandered in off the street. 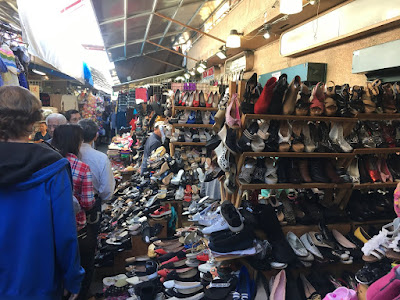 I like what one Yelp reviewer wrote: "It's like shopping in Asia, so be prepared to be bumped, jostled,  elbowed, and prodded. They're not concerned with personal space, because space is at a premium. Deal with it. Many Asian vendors (everywhere) are cash only, so be prepared with cash. Also, psyche yourself up to do a bit of haggling, but, you're still gonna lose." 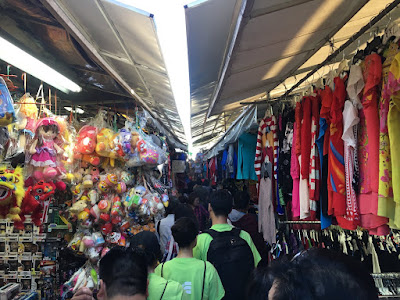 I generally OK with crowds - but as the aisles continued to get more and more narrow, I decided to turn around. This place was crazy. I'd like to come back a bit more prepared, and with friends. How I did I live in Los Angeles for so many years and never know this even existed? 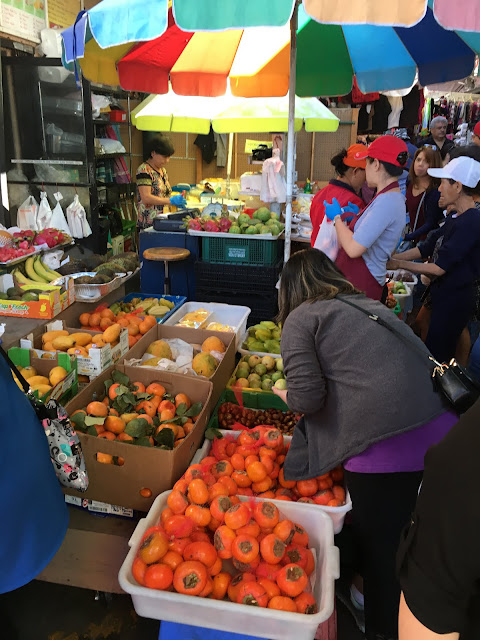 Back outside next to the street, vendors were selling fresh vegetables. 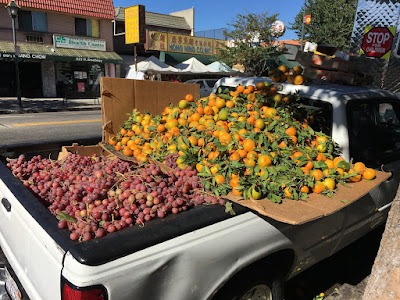 Back out on North Broadway, a pick up truck was parked out on the street, with a vendor selling grapes and oranges. This is the kind of thing that drew men and women to Southern California 100+ years ago. And - at least in terms of climate - still continues to do so.

By the way, up until 1954 Los Angeles' County Seal was a cluster of grapes. Orange County's Seal still proudly features - of course - oranges. 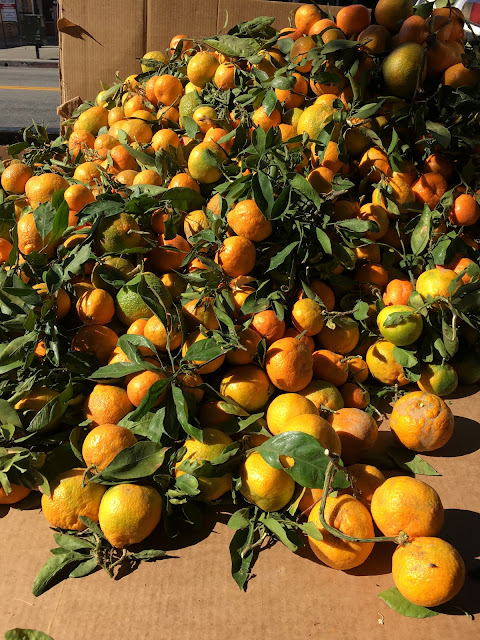 The City of Los Angeles' layers of bureaucratic red tape seem to regulate almost every aspect of life. Personally, I find it refreshing that someone can just set up shop on the side of road, and sell fresh fruit off the back of their truck. Rather than cranking down on stuff like this, how about the city make it easier for the brick and mortar establishments to thrive and succeed? 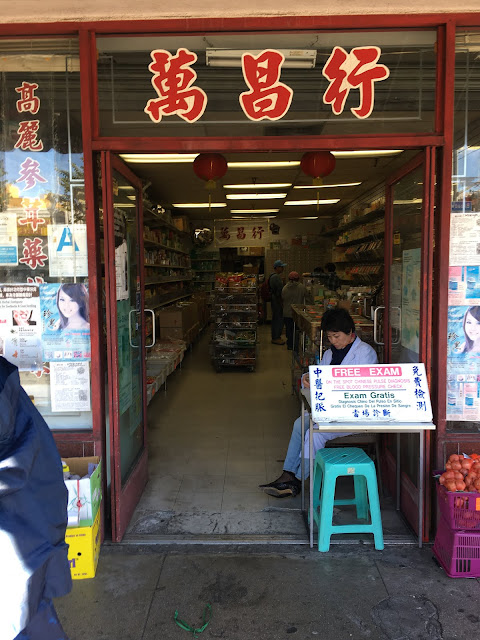 The businesses along North Broadway are pretty much what you'd find along most business districts around the city - however, with a distinctly Chinese flair. This is a pharmacy. 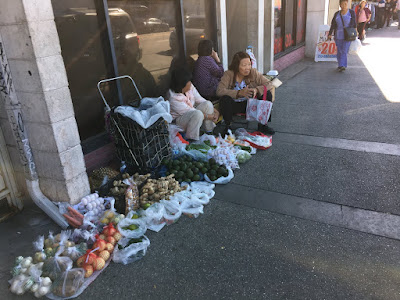 A couple of old ladies selling fruit on the side of the road. Maybe not as appealing as the guy selling grapes and oranges off the back of his truck, but they're just trying to make a buck. 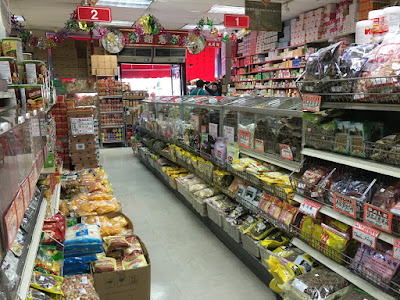 I popped into white looked and felt like a grocery store. Most everything felt foreign to me. And, of course, familiar to residents in the neighborhood. 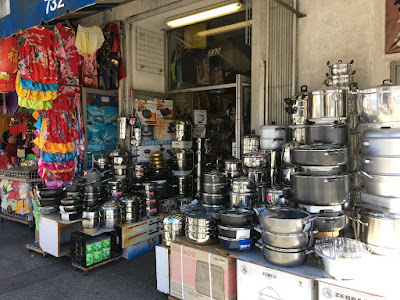 Pots and pans right out front. 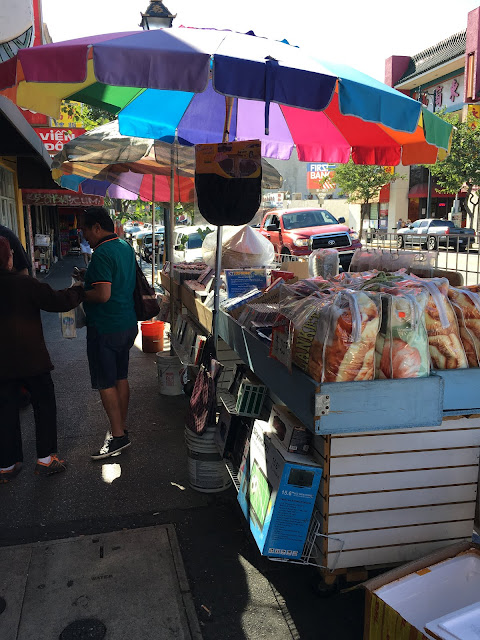 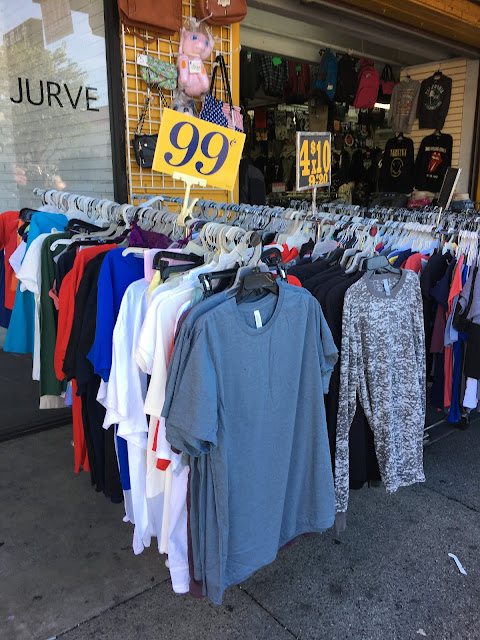 T-shirts starting a 99 cents. People often complain how expensive Los Angeles is. Guess it depends where you shop, right? 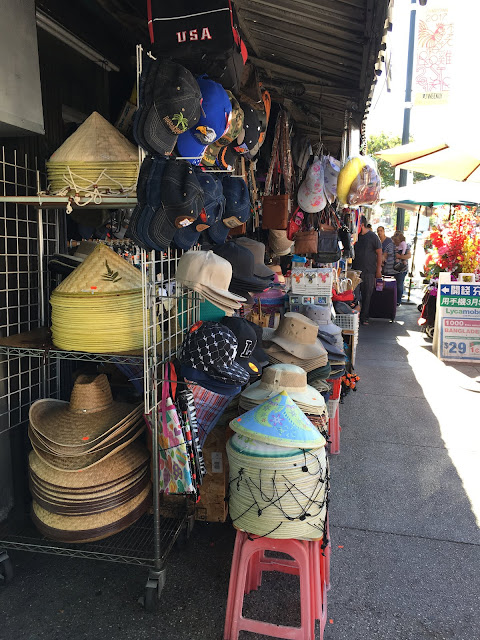 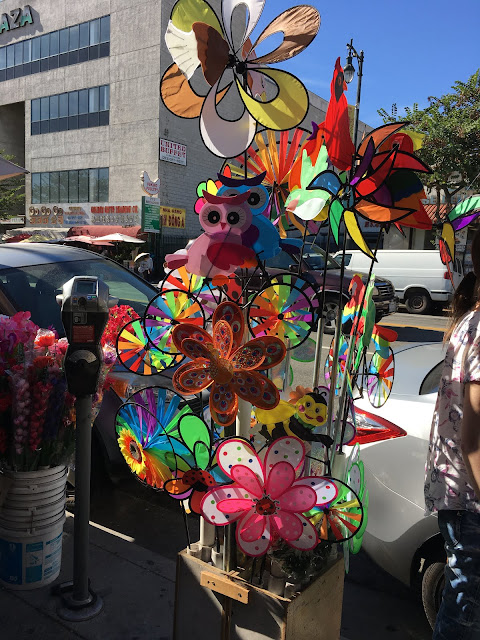 Looks like the kind of stuff you stick in your yard. 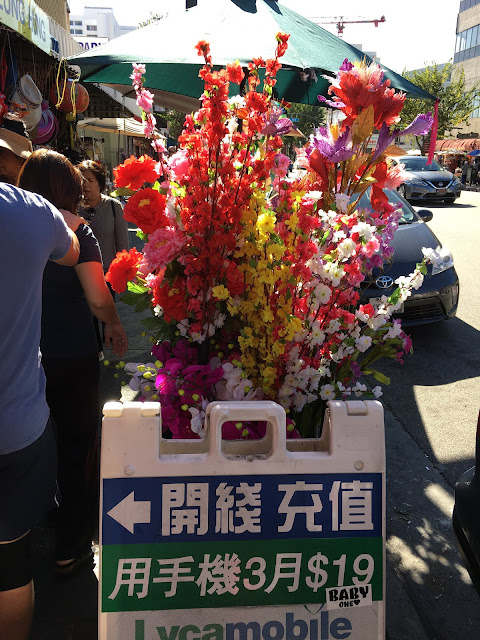 Artificial flowers. Apparently, something is on sale for $19. No idea what. 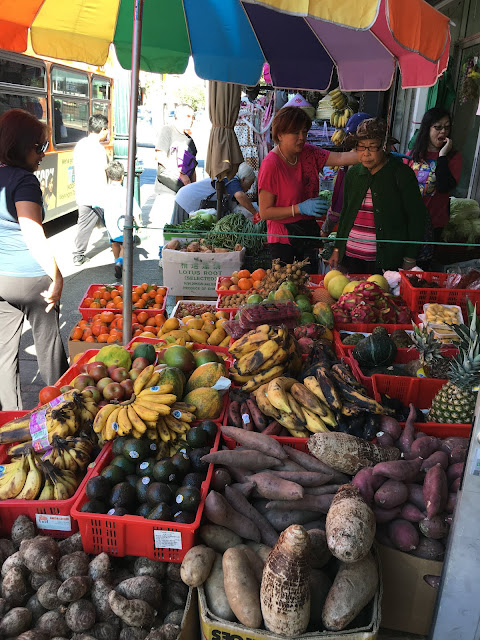 More fruits, more vegetables. Love it! It seems like one of the easiest things Los Angeles could do to encourage more street life, especially along major thoroughfares, is more street level businesses, and making it easier for shops to display and sell their merchandise right on the street. 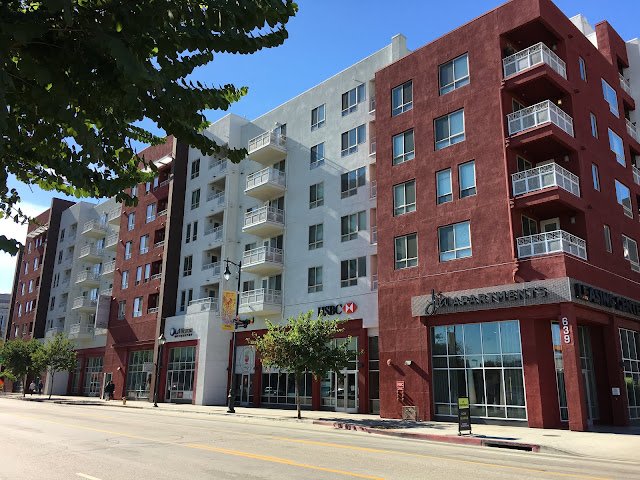 Across the street, some new apartments buildings, with - awesome - some street level businesses. 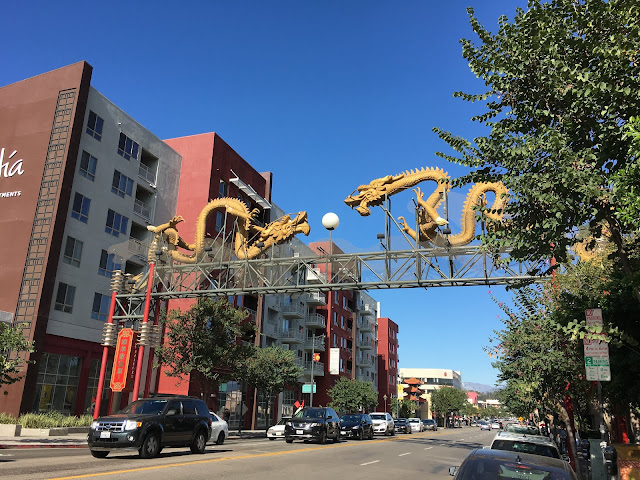 The twin dragons at the entrance to Chinatown. This is near the corner of North Broadway and East Cesar Chavez Avenue (Cesar Chavez becomes Sunset Boulevard a couple of blocks to the west). 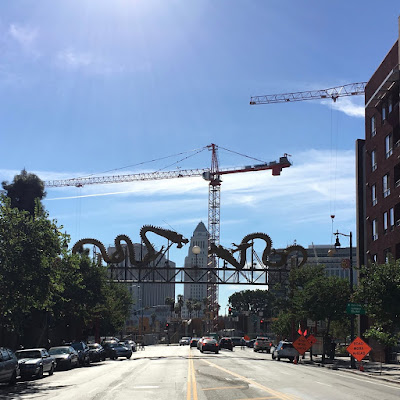 A final view of North Broadway, with a construction crane and Los Angeles' City Hall in the distance. 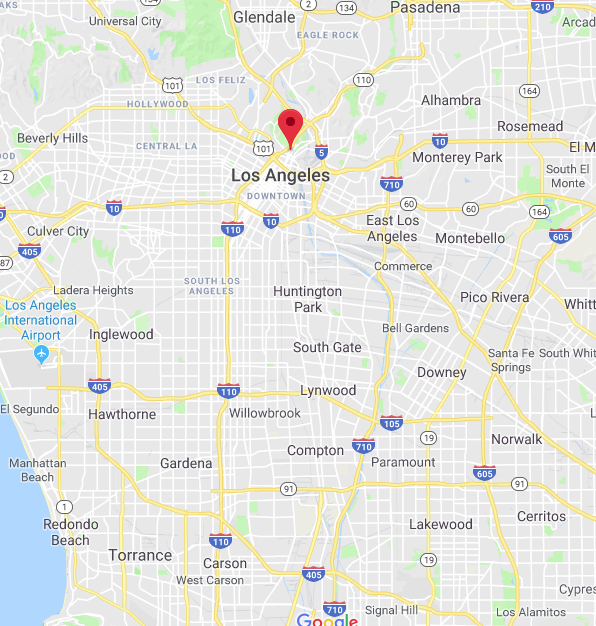