Last night I learned that Christopher Hitchens, the British-American author and public intellectual, died of cancer. He was 62. Below are some thoughts when he was scheduled to speak at our local Barnes & Noble in June of 2010:
. . . I noticed that Christopher Hitchens would be speaking on Tuesday night June 29th at the Barnes & Noble bookstore in Santa Monica.
Christopher Hitchens is one of most outspoken atheists in the world. He's the author of several books, including God is Not Great: How Religion Poisons Everything and The Portable Atheist: Essential Reading for the Nonbeliever.
Believe it or not, as a Christian, I was looking forward to hearing him speak. I'm convinced that a faith that's never tested intellectually isn't much of a faith. Besides, I survived 4+ years at UCLA. What's another 30 minute lecture?
Decided to read up and prep a bit before hand. 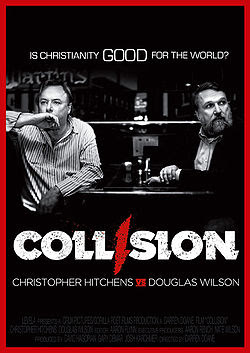 A friend and colleague of mine recommended the DVD Collision. Wow. Excellent. This film chronicles a series of informal debates between Christopher Hitchens and author, pastor, and Christian intellectual Douglas Wilson. At Washington State University, a Christian fellowshipand an atheist/agnostic group both "endorsed" the film before a screening. How often does that happen? It's very balanced and - in my opinion - intellectually challenging to both believers and skeptics.
Tuesday afternoon June 29th I walked by Barnes & Noble and saw this:

What? Cancelled!
When I asked a sales clerk why, she said "because of personal issues."
I jokingly told a friend "it's because he heard we'd be showing up." Ha! Sure. As if.
I was sobered to later learn that he canceled this (and several other west coast engagements) because he's recently been diagnosed with cancer. I'm sorry and saddened to hear that.
Despite his virile rejection - hatred might be a more appropriate word - of God, let alone Christianity, I'll be praying for him.
Perhaps I'm being very naive, but I figure, if God could change my life, He could certainly change his.
____________________________________
With his passing, I appreciate these two comments from this morning's (12/16/11) on-line version of the Los Angeles Times:
"I am a Christian who is deeply saddened by the passing of Christopher Hitchens. He was a brilliant man and ramped up the level of discourse whenever and wherever he spoke. Though we were in opposite camps when it came to faith, I appreciated his intellect and how his challenges to my faith helped me analyze and define what I believe. As I do believe in the hereafter I sincerely hope he has found favor with God."
"Now he will definitively know without a doubt whether God exists or not."
Sobering. And sad.
© 2011 www.experiencingla.com - originally posted 6/29/2010
Posted by David from L.A. at Friday, December 16, 2011