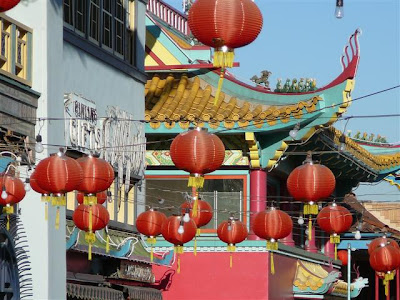 Back in 2009 my wife and I took our then 9 year old son and our 8 year old nephew to "Philippe's" - a 100 year old restaurant in downtown Los Angeles for lunch. Here's the link. Afterwards, we went to Olvera Street (the oldest street in Los Angeles) and then after that decided to walk over to Chinatown. 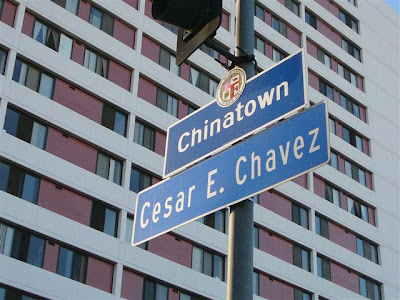 The day was overcast, crowded, somewhat confusing, and not much for kids to see. After walking a block or so up Broadway (the main drag) I could tell the boys were miserable. Time to head home.

A few months later I decided to give Chinatown another shot, this time by myself. I was in the neighborhood and figured I could scope out what see the next time with my kids. And take some pictures for the blog here. 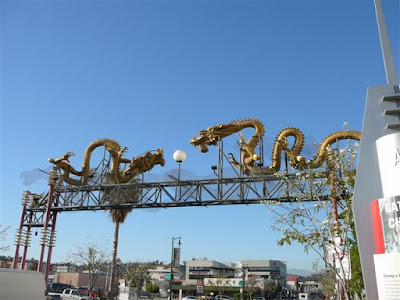 The southern entrance to Chinatown consists to two huge dragons over Broadway. 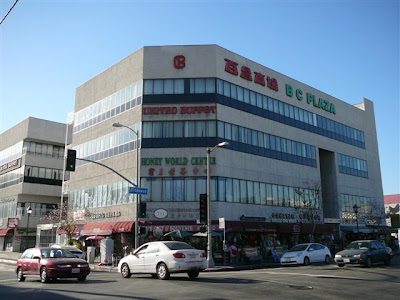 Chinatown is a working business district with a mixture of both contemporary and traditional architectural styles. The "BC Plaza" here is pretty typical. I like the names of some of the businesses: "United Buffet" and "Honey World Center". 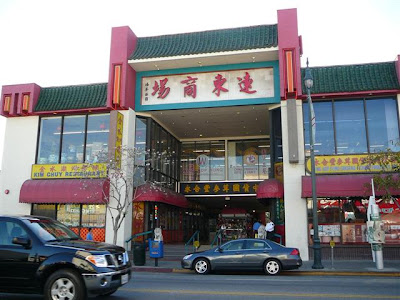 Another commercial center. Apparently, scenes from Lethal Weapon 4 (gee, missed that one) were filmed here. 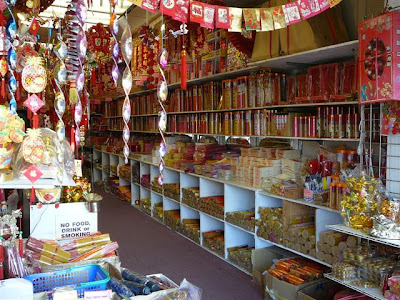 I have no idea what this store sells, but I loved the colors! 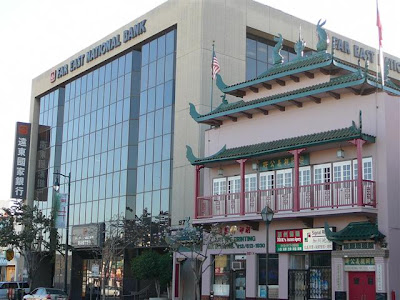 I liked the contrast between the Far East National Bank, and the traditional Chinese building. 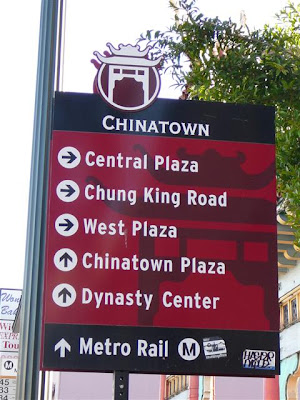 The Gold Line metro rail (which goes all the way to Pasadena) has a stop in Chinatown. 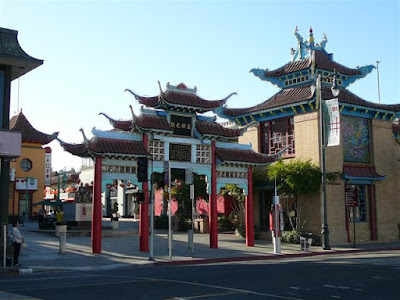 The Central Plaza. This is what comes to mind when I think "Chinatown." I found this excellent link. It was 6pm on a weekday and very quiet. The Central Plaza (and the rest of Chinatown) are much busier during the day. 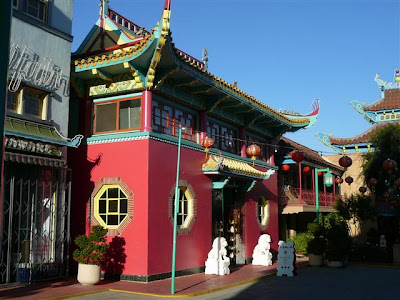 The Central Plaza consists of a dozen or more traditional Chinese buildings. It was built as a tourist destination in the late 1930's and early 1940's with restaurants and souvenir shops up and down the plaza and pedestrian street. It's fun, and (important for me as a dad) a great for kids. 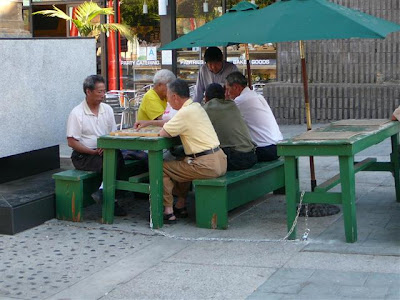 A group of Chinese men playing mah jong in the Central Plaza. 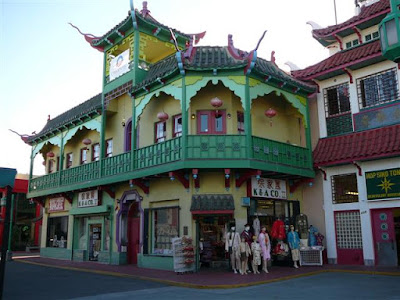 Sure it's a little touristy, but it's also great place to introduce my kids to another part of Los Angeles. Kind of ease them into the whole "cross cultural" experience. They've got plenty of years to experience the more urban side of Chinatown (and L.A.) ... and to grow in their understanding of other peoples and other cultures. 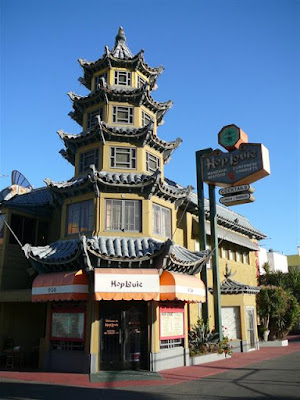 As a Christian, I'm reminded that God constantly calls me to grow in faith. To take steps and move beyond what's just comfortable. For my 7 and 9 year olds, walking around Chinatown and having lunch at a different restaurant (like Hop Louie's, pictured above) is a good first step, at least in terms experiencing another culture. There are so many incredible opportunities in Los Angeles to interact with different people, different cultures. In years to come I hope their experience doesn't end with a lunch at Chinatown. 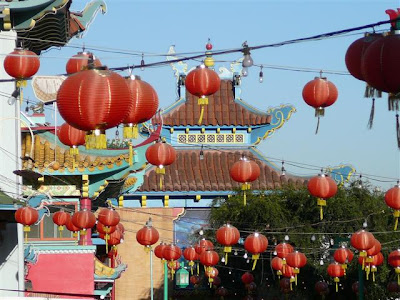 A last look at the Central Plaza. 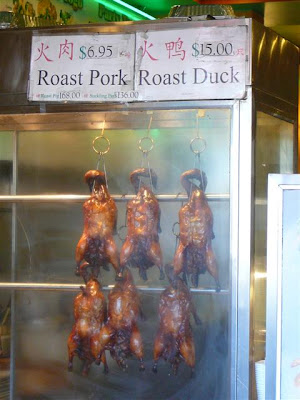 Meanwhile, back on Broadway, it was a chance to take in the sights and sounds of the rest of Chinatown. Mmm, roast duck. 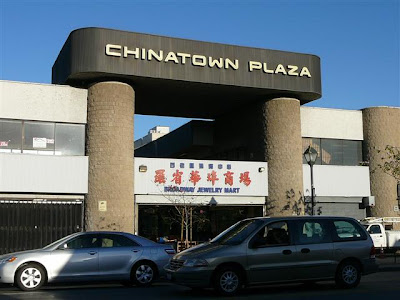 Another modern commercial center. According to a professor friend from Cal Poly Pomona (who is from Hong Kong, so I assume he knows what he's talking about) the Chinatown in downtown L.A. was founded by Cantonese immigrants. When Mandarin speaking Chinese immigrants began arriving in the L.A. after WWII, they created their own Chinese community in Montery Park (which today has a HUGE Chinese population - subject for another blog). 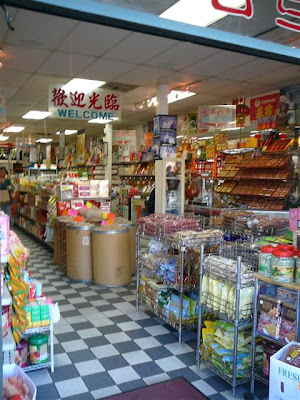 Another small "mom and pop" store. I really wish I had someone to show me around! 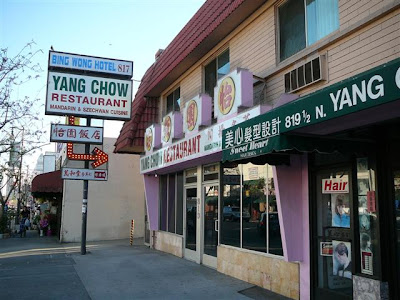 I not sure why I like this photo. Maybe because the architecture looks so "average." Aside from the Chinese signs, this could be about anywhere in Los Angeles. 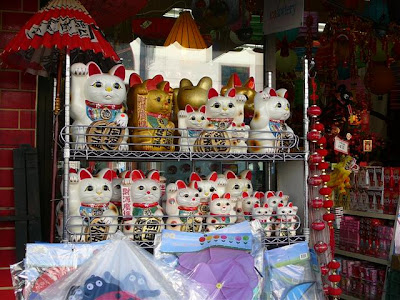 Now I know where all the Chinese restaurants in L.A. get their lucky cats. 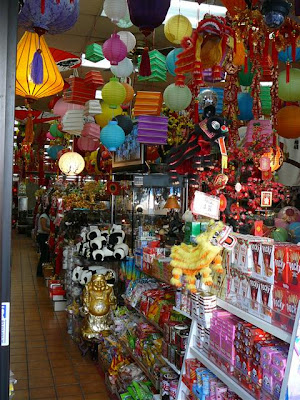 The inside of the store with the lucky cats out front, full of tchotkies and other paraphernalia. 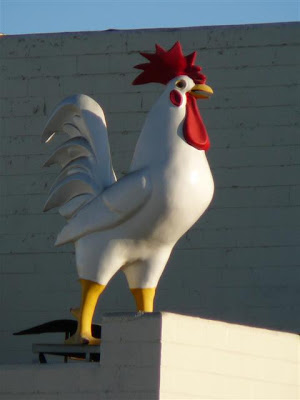 I LOVE this rooster on top of the roof of the poultry store! 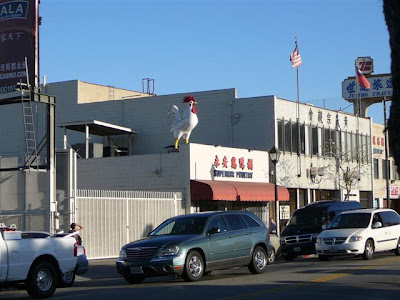 Another view of Superior Poultry and the surrounding area. 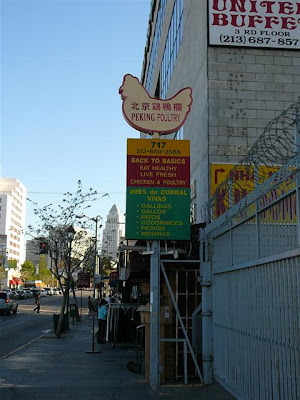 Across the street from Superior Poultry is Peking Poultry. Both places sell live chickens. The sign in Chinese, English, and Spanish is "so L.A" (so is the barb wire on the right hand sign of the photo!). City Hall is visible in the distance. 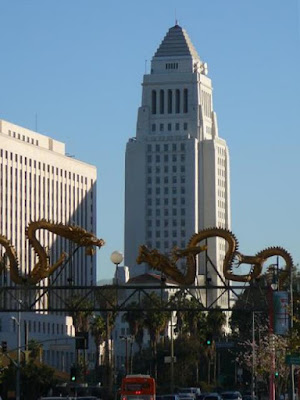 City Hall looming over the twin dragons at the entrance (and for me, exit) to Chinatown. Time to head home. I hope to be back sometime - with my kids in tow.
.

Chinatown in a larger map

Great photos. Thanks for reposting this. I must have missed it before.

I thought the only Chinatown in Cali was in San Francisco. This is really cool ...