Several months ago I came across this website with a visionary plan for a real mass transit system for Los Angeles. www.GetLAMoving.com.

I cringe every time I hear someone say "Los Angeles has always been a car culture." Always? Even through the end of the Second World War, Los Angeles had a massive rail transit system.

At it's height in the 1920's, the Red Car system had over 1000 miles of track! Perhaps even more incredible, the population of L.A. County at that time was only one million people - compared to ten million today. 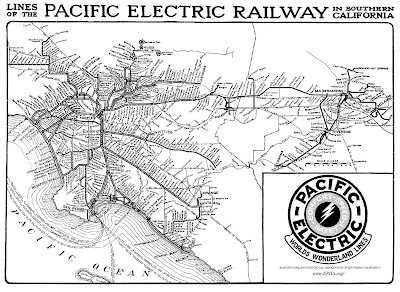 Los Angeles is the second largest city of the richest nation on earth. Our current subway is great - but still extremely limited.

Los Angeles doesn't have a "car culture" as much as it has a "convenience culture". People took the Red Cars because they were convienent. Obviously, when the L.A. Freeways were built, traffic was limited, automobiles were more convienent. Today, a bus down Wilshire is stuck in the same traffic as everyone else - it's not more convienent. People will take light rail or a subway when it is quicker than driving, in other words, when it's more convienent. 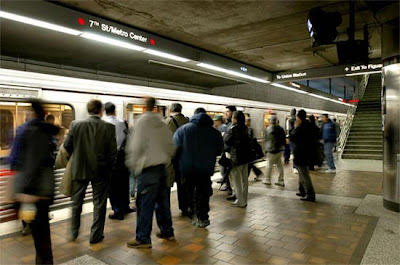 The reason why people on the Westside don't take the subway down Wilshire - is because it ends in Koreantown! We're still waiting.

The above map is our light rail/subway system today. The "Red Line" actually ends in North Hollywood, becoming the "Orange Line" bus way though the Valley (transfering from bus to rail = lame). Fortunately, as pictured, the "Gold Line" is being extended from downtown to East L.A. Also, not pictured, the "Expo Line" is being built from downtown through the USC area and on to Culver City.

The "Subway to the Sea" (the "Purple Line") needs to be built along Wilshire, through Century City, and into Westwood. The "Green Line" needs to connect to the airport. What were they thinking? The "Blue Line" needs to go all the way to Union Station. A new line needs to go from the "Blue Line" in Long Beach through the South Bay to the airport, to Westwood, and to the north end of the Valley.

The individual lines are a good start, but no where near the system our city needs. It's time to get LA moving.