A couple years back I was in downtown Los Angeles and had some time to walk around the Historic Core. Here's a link to Part I, Part II, Part III, Part IV, and Part V of this multiple part series of my little stroll around the area back in November of 2013. 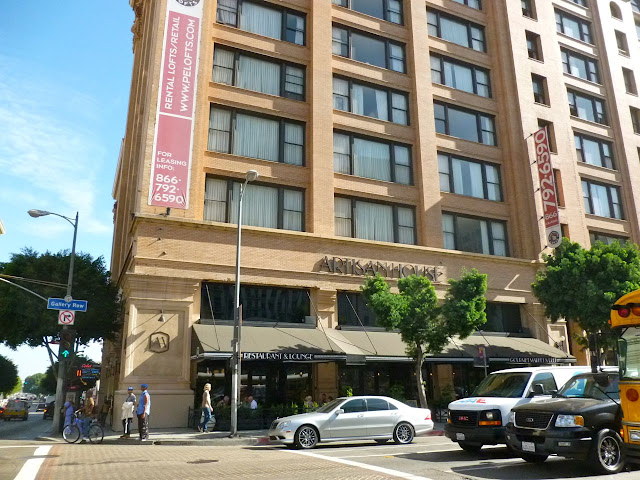 On the corner of Main and 6th Street, the Pacific Electric Lofts. 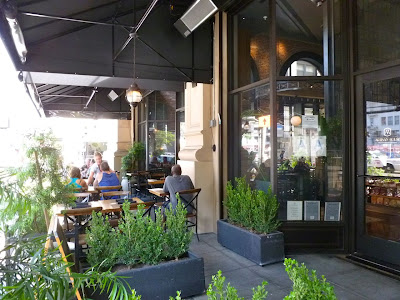 Ourdoor dining. According google maps, this section of Main Street is the northern most border of Los Angeles' Skid Row. The change is this area is incredible. 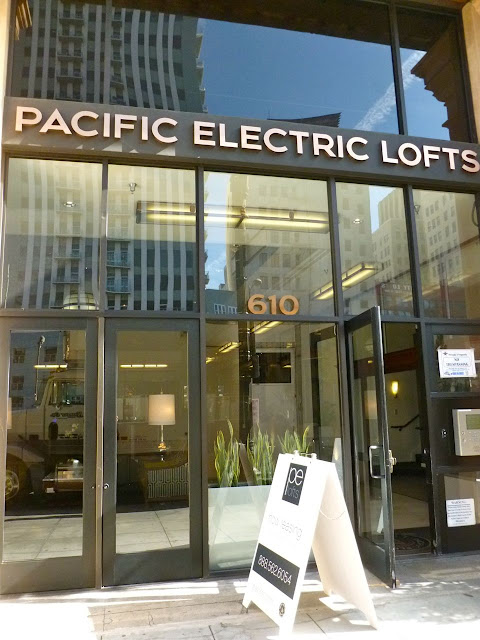 Pacific Electric Lofts is located in the former headquarters of the Pacific Electric. The Pacific Electric - also known as the Red Car system - was a massive interurban and streetcar system. During the 1920's, it was the largest electric railroad system in the world. With over 1000 miles of track, it served all of metro Los Angeles - amazing when you remember that L.A's population in the 1920's was 1/10th of what it is today. The 1905 ten story building's large footprint made it the largest building west of the Mississippi until the 1950's. It was converted into loft apartments in 2005 with 314 units. 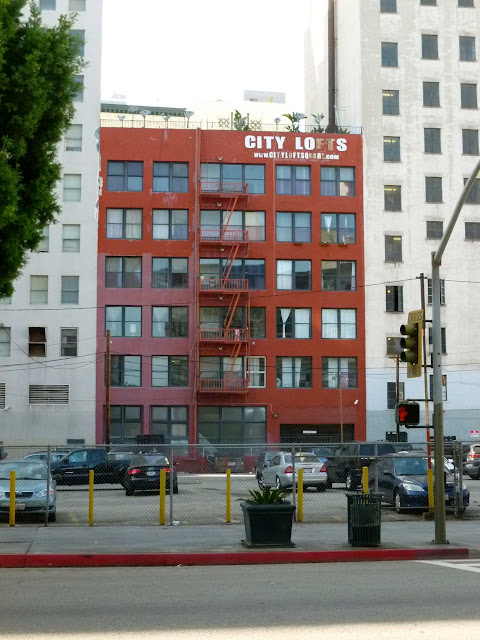 Across the street, the backside of City Lofts, the original Mortgage Guarantee Building built in 1912 and reopened in 2004 a a live/work residence. The entrance is on Spring Street. 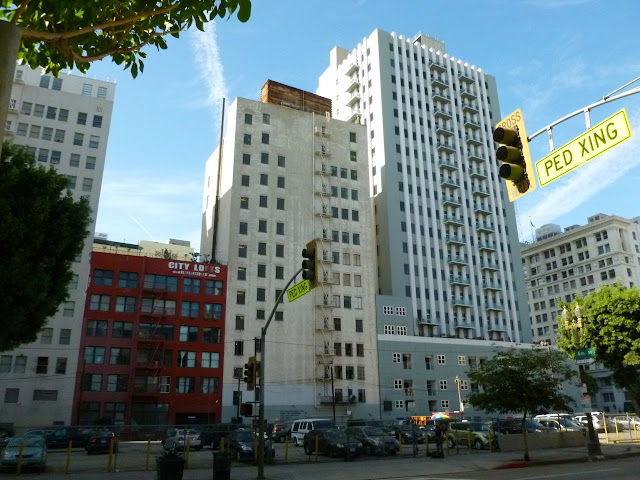 Another view of the "back" of Spring Street. My guess is that this surface parking lot is in the cross hairs of development - which, honestly, is a good thing. 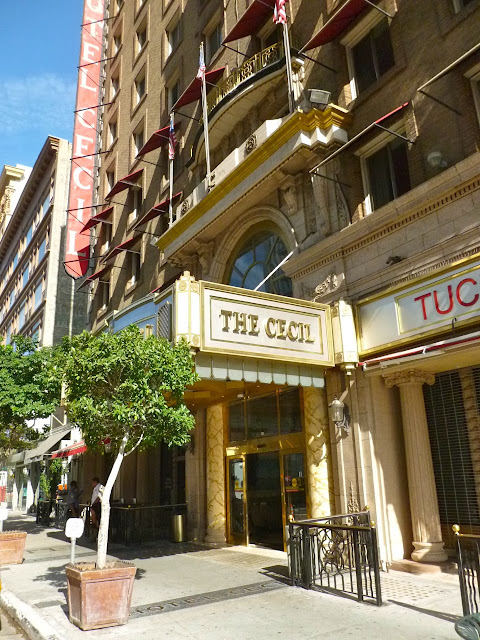 The Cecil Hotel. Constructed in 1924, the hotel has apparently recently renamed and rebranded it's as "Stay on Main" - a 600 room budget hotel. Rooms go for about $125 a night. For downtown Los Angeles, that's budget. Not everyone can afford $300 a night. 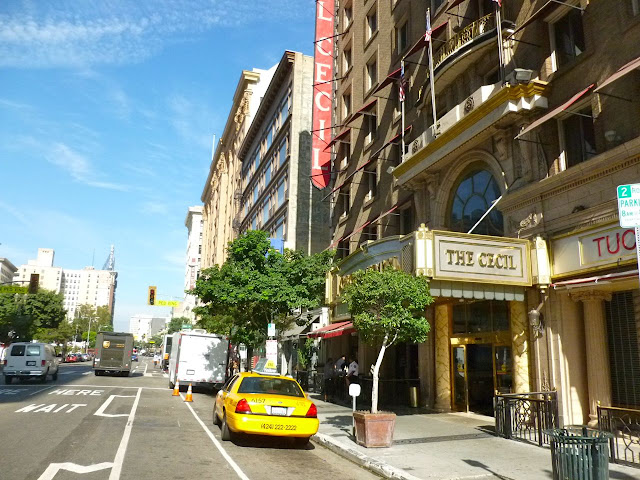 Looking north on Main Street. A security guard asked if I was a location scout (for a studio). No, just a blogger who enjoys taking photos of Los Angeles. 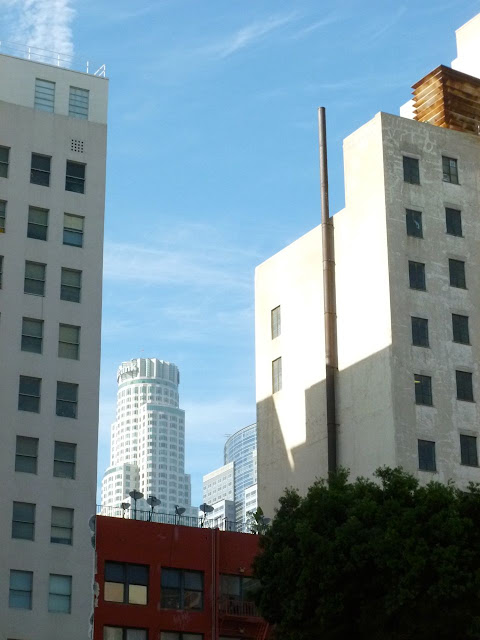 Through the historic buildings on Spring Street, a view of the US Bank Tower. At 73 stories, it is the tallest building west of Chicago. It opened in 1989 and has been featured in numerous films, including "Independence Day." Current plans call for an observation deck on the top floors, to be opened in later this year (2016) and open to the general public. 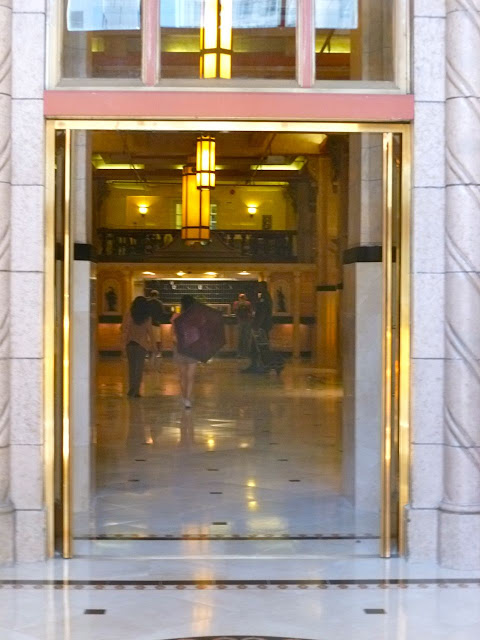 Entrance to "Stay on Main" - unfortunately, the reviews are not very kind. Some people loved it, some hated (really hated) it. It's really a budget hotel/hostel. Yes, you can get rooms really cheap with shared baths. If you're the backpacking through Europe type, "Stay on Main" might work out. But either way, I'd suggest reading the reviews - and the history of the building - first! 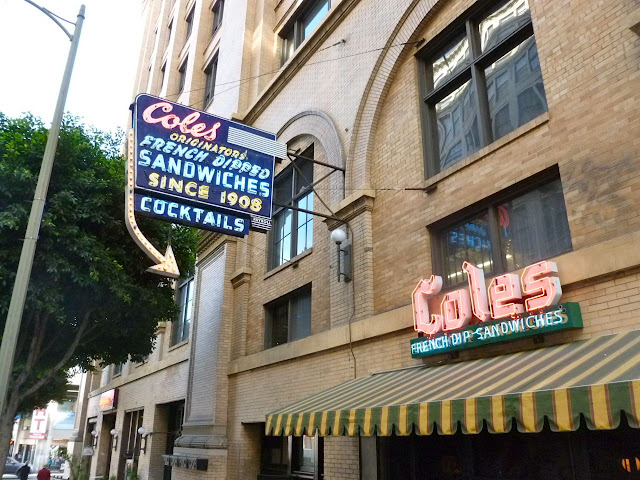 Around the corner on 6th Street, located in the Pacific Electric Lofts Building, is Cole's French Dip Sandwiches. 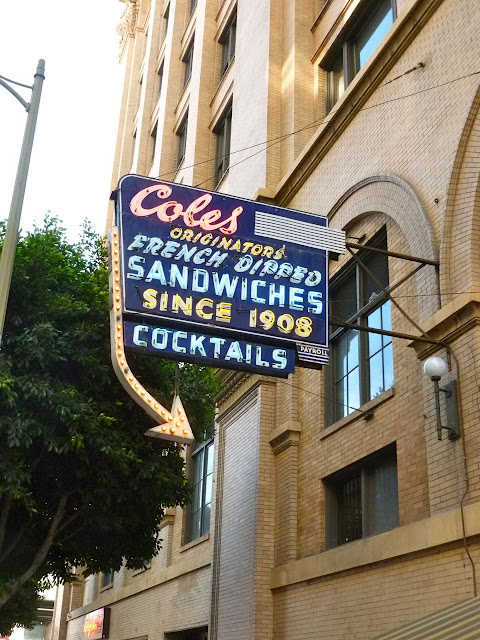 Cole's claim to fame is that they invented the French Dipped Sandwiches. Which is exactly what Philippe's - located a couple miles north on the other side of Downtown Los Angeles - claims. 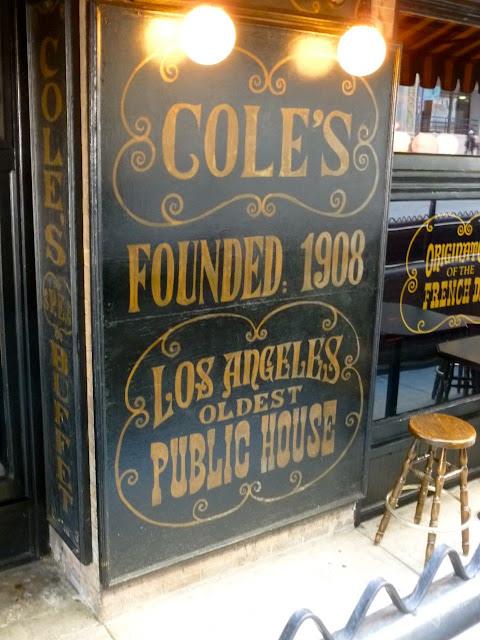 You can decide for yourself. 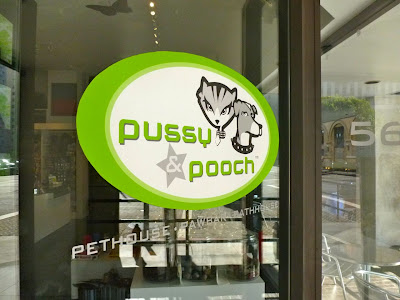 Back on Main Street, located in the Santa Fe Building on the corner of Main and 6th, is Pussy and Pooch, a really high end pet store. 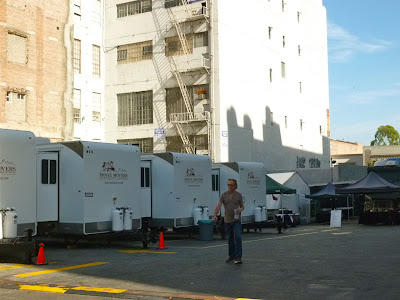 One of the last stops before I made it back to my car was an "on location" movie shoot. This is actually very common in Los Angeles. 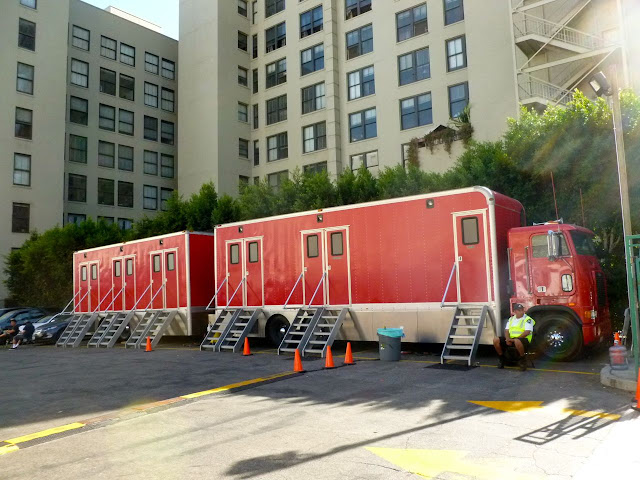 Lots of big trailers. I asked the security officer what was being film, but he didn't know. Seriously, movies are often filmed using a pseudonym - a fake name - to avoid publicity (and paparazzi). 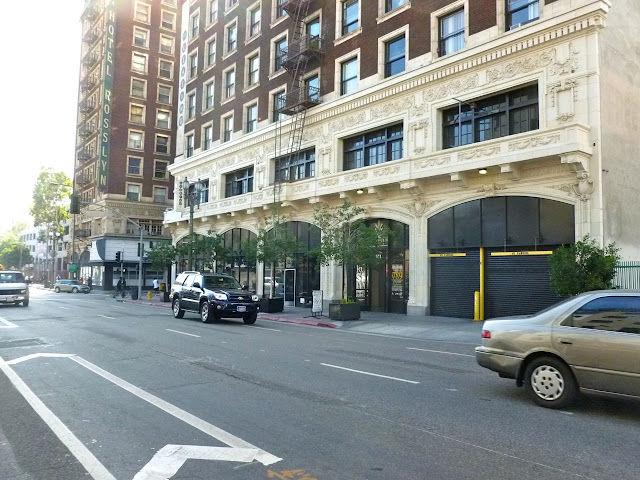 A final look back down Main Street. The 1914 Rossyln Hotel - now the Rosslyn Lofts. As a hotel, the Rossyln, and it's annex across the street, was at one time the largest hotel on the west coast, featuring 1100 rooms. 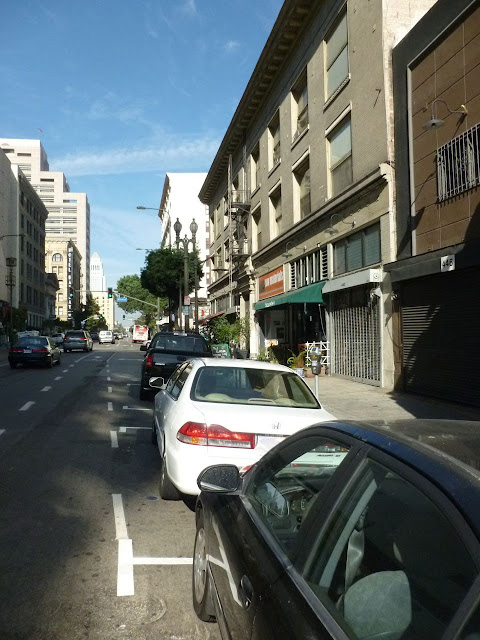 Back at my car (the white Honda). You can see the orange Raw Materials art store sign. 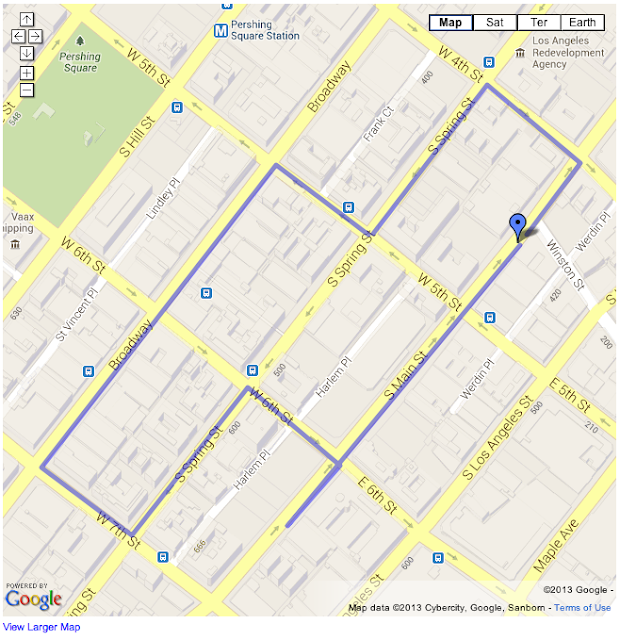 Here's a map of my "little walk" - which I accomplished in less than an hour.

The meter was ticking - and I did not want to get a ticket.

This part of downtown Los Angeles - the Historic Core - is amazing. My one hour (really, not even that) does not do justice to everything there is to see and experience.

Growing up in Los Angeles in the late 1960's and 1970's, and attending UCLA in the early 1980's, I avoided this part of downtown. Sure, I walked down Broadway a couple of times for the Latino vibe and feel. But never down Spring or Main. Back in the day, that was a no-go zone.

If I did go downtown (most of my friends from the westside did not) it was to walk around the Bonaventure, or some of the shinny new buildings on Bunker Hill.

While Bunker Hill is slowly filling in (it's only taken fifty years), I'd honestly rather spend time in the Historic Core. Much more interesting, more history, more people, more life.