"I Got A Rock" - Levitated Mass at LACMA 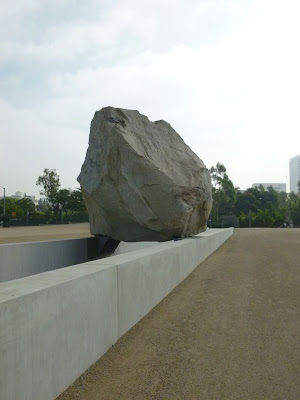 Levitated Mass - I'd heard of it, seen pictures, and read an on-line article.

Earlier this month I was back in Los Angeles and was able to find some time in to see it myself. 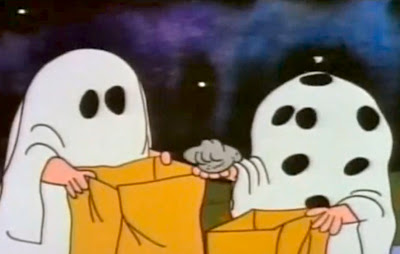 My initial impression was the memorable line from the old Charlie Brown Halloween Special: "I got a rock."

In 1886 New York City got the Statue of Liberty. 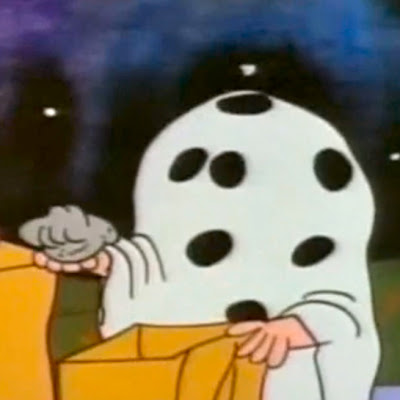 OK, that was my initial impression. 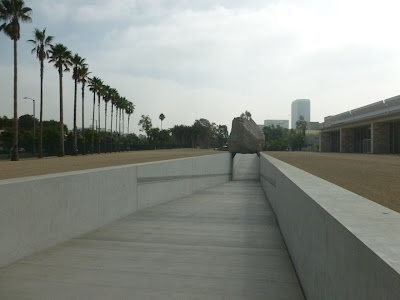 Levitated Mass is the dream of artist and sculpturer Michael Heizer, consisting of a 340 ton boulder above a concrete trench. 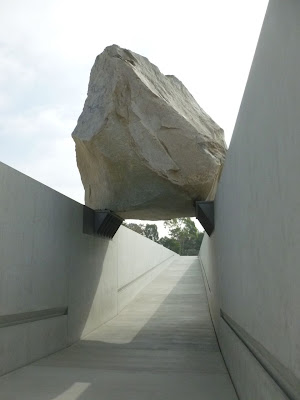 The trench is designed to allow visitors to walk underneath, which I took the liberty to do.

Levitated Mass is located on the grounds of the Los Angeles County Museum of Art (LACMA). I was there early before the museum opened and was able to walk around and take pictures. Unlike the rest LACMA, Levitated Mass does not require museum admission. 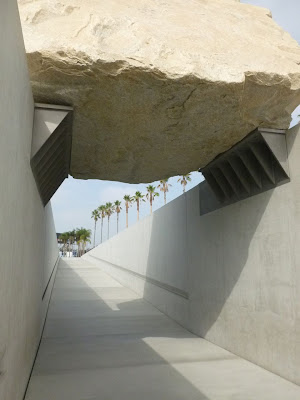 This project cost $10 million dollars, which all came from private donations. Much of the cost went to herculean task of hauling the 340 ton boulder from a quarry in Riverside County over surface streets. Pretty impressive feat of engineering. 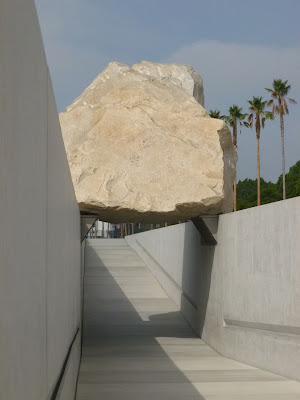 Last year, a friend gave me a copy of Andy Crouch's book Culture Making: Rediscovering Our Creative Calling. Crouch is an author, and former campus minister at Harvard University. Addressing other Christians, he writes: "It is not enough to condemn culture. Nor is it sufficient merely to critique culture or to copy culture. Most of the time, we just consume culture. But the only way to change culture is to create culture."

My initial impression was to simply critique Michael Heizer's work. After all, it's just a big rock, right? Crouch's book challenged my thinking.

Actually, it's a boulder. A huge boulder. According to another site, "it's the 11th-largest moved monolith in history." Unlike the first ten, you can actually walk underneath this.

Ten million dollars seems like a lot of money. Apparently in the world of art, it's not. It all came from private donations, which Heizer (really, those representing him) raised.

The boulder traveled through 22 different cities and 4 counties to get from the quarry in Riverside to the Los Angeles County Museum of Art on Wilshire Blvd.  I can't imagine what went into negotiating the bureaucratic maze of city, state and county red tape to obtain the necessary permits.

And it's publicly on display, free for anyone to view. 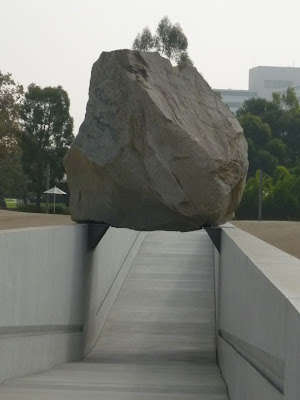 Levitated Mass is no Statue of Liberty or Cloud Gate. It's not even in the same league. Still, it's still a unique and novel piece of art. It got my attention, and some space on this blog.

Mulling over author Andy Crouch's words a bit more, what I appreciate the most is Michael Heizer's ability to create something. Even if I'm not in love with it, I have to admire that he actually saw this project to completion. And rather than condemning, critiquing, copying, or just consuming - he created culture.

Something certainly easier said than done.

Here's some additional information from the Los Angeles County Museum of Art's website.

Like the 99 cent store in the background in that one photo of the rock - so L.A.

Great post--inspired me to check it out! Thank you!

Actually, you are right, this work even if very mediatized was not to thought—and now made—for consumption. It is a pure culture, and according to the artist, it is even a pure American artfact.
But like everybody knows, great art often exceeds artists' desires. Levitated Mass, in many ways, speaks about each and every one of us, living on planet Earth.
For further details about this awesome and collective artwork, feel free to check out this link:
http://obsart.blogspot.fr/2012/02/340t-340g-heizer-perray-usa-fr-280212.html
Best regards