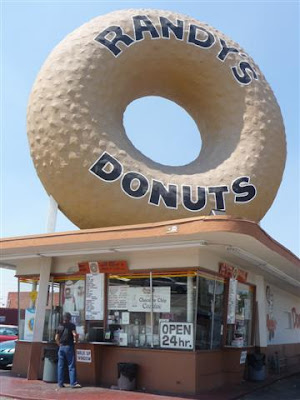 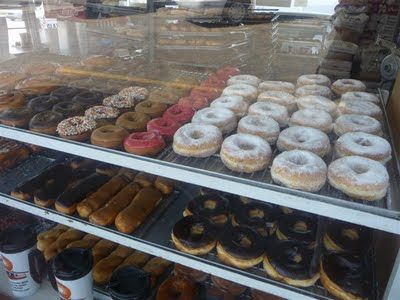 You'll have to go elsewhere if you're looking for something healthy or "California cuisine." Randy's serves one thing: donuts.
OK, technically, they also sell coffee and lottery tickets. Stick with the donuts: they are yummy. 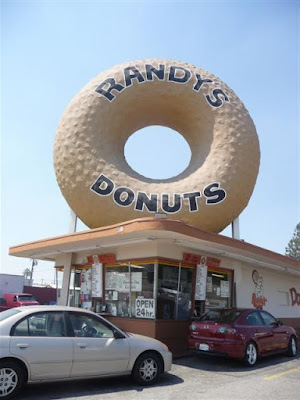 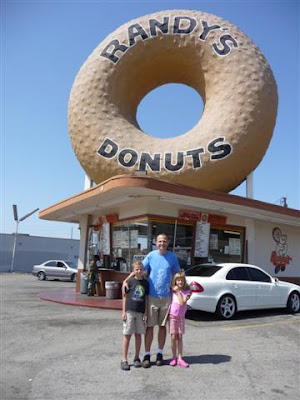 I've been here a few times, including a quick stop with my wife and kids coming back from Home Depot in Inglewood this afternoon. In addition to a picture we, of course, had to get a couple of donuts.
Apparently, there are a couple other similar donut shops in the area (one in Compton and another in Long Beach) but Randy's is blessed by being very visible from the 405 Freeway, making it the most well known and successful. 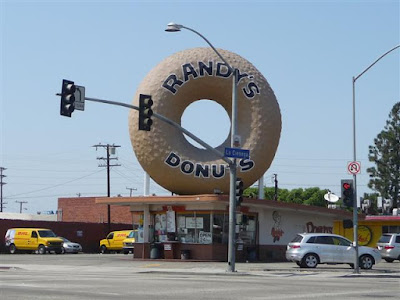 What's the appeal of Randy's?
It's been around since 1953, and unlike the Century Plaza Hotel there's no talk of putting in something "better." I mean, how can you improve on Randy's? Second, it's one of Los Angeles' best surviving examples of mid-century "programmatic architecture." Yes, that's actually a category of architecture, where the where the shape of the building represents the product sold within. I'd love to see a resurgance of these kinds of buildings.
Here's a link to a few others found in the area.


Earlier this year, February 2011, a friend and I attended Faithful Central Church in Inglewood, located a mile east of here. Great, amazing church - topic for another blogpost.


And, yes, driving by Randy's on the way home we stopped for the obligatory donuts.
© 2011 www.experiencingla.com  (originally published 9/19/09)