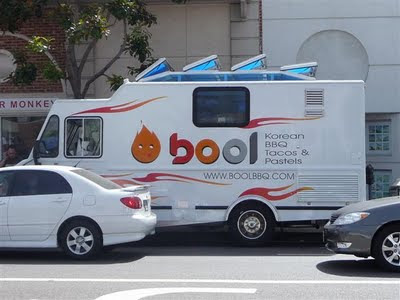 A couple years back I was in Westwood Village (next to UCLA) when I spotted one of the "speciality" Taco Trucks that have popped up over Los Angeles in the last few years. I'd heard about these things, and wanted to experience one for myself. 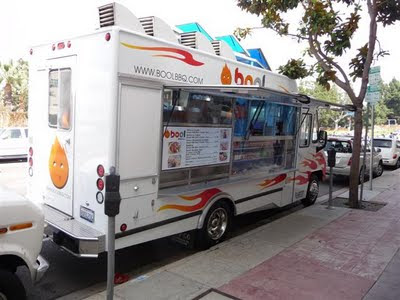 Bool BBQ is more than your standard Taco Truck. They specialize in Korean BBQ Tacos.
I like Korean food - I like Tacos. So, this being Los Angeles, why not try a Korean Taco? 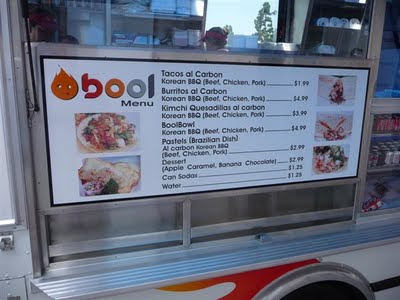 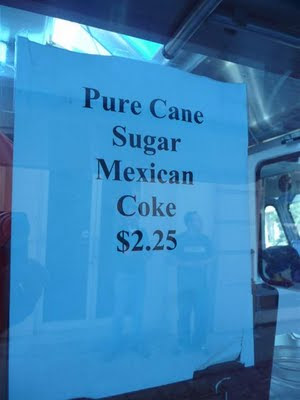 Apparently, these speciality Taco Trucks have loyal followers. But how do you find them? Two choices: Twitter, or this new website I found:www.findlafoodtrucks.com


From their site: What up Bro? How you doing girl? You hungry for that food truck grub? Of course you are. Well,www.FindLaFoodTrucks.com is the easiest way to figure out where your favorite trucks are. As you probably already know, LA has experienced an explosion in gourmet food trucks serving every type of food, including mexican, korean, bbq, contemporary american, desserts, ice cream, and various fusion cuisines. Who has the time to go to a bunch of different twitters and websites to figure out where they are? Luckily, you have us. We track all the trucks twitters right here, so it is quick and easy to figure out which ones are close to you. 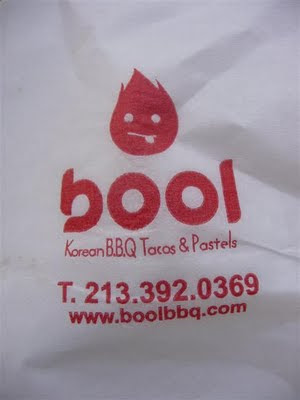 Not everyone is in love with these gourmet food trucks. A local restaurant owner confronted me while I was deciding what to order at Bool BBQ, loudly stating: "They don't have a restroom! Where can you wash your hands? Where can you sit? Why don't you thrown your trash on the sidewalk when you're done? Everybody else does. They don't pay taxes! They don't pay rent!"

While no body likes confrontation - I think he has a point. The Los Angeles City Council recently voted in favor of the Taco Trucks. Great for the owners (and workers) on the trucks, as well as Angelenos looking for a cheap bite to eat.

A better solution (in my non professional opinion) would be for landlords to think about lowering their rents. Places like Westwood are already awash in vacancies. Empty storefronts don't help anyone.

I'm probably not going to "track" these mobile food trucks - either on Twitter or on the web. On the other hand, if I see Bool BBQ around lunchtime in Westwood, I'll definitely skip a sandwich at Subway and be back.
(originally posted 9/26/2009) © 2011 www.experiencingla.com
Posted by David from L.A. at Saturday, August 20, 2011

these are limited to LA - but, yes, fun