Under the Sea: mural at Leo Carrillo State Beach 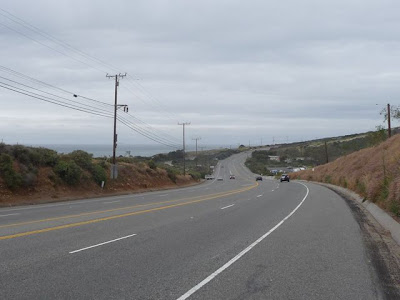 Located on the western most edge of Los Angeles County is Leo Carrillo State Beach. It's about 30 minutes up the coast from Santa Monica, just past Malibu.
Earlier this year our family joined some other westside homeschool families for a mid-week overnight there. More on that in a bit. 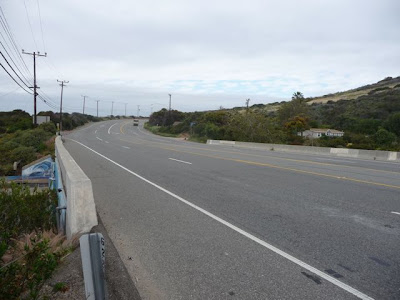 The Pacific Coast Highway separates the beach (to the left) from the campgrounds (to the right).
The bridge is pretty non-descript. What's amazing here is what's under it. You can see a bit of it in the photo above, and much more in the photo below. 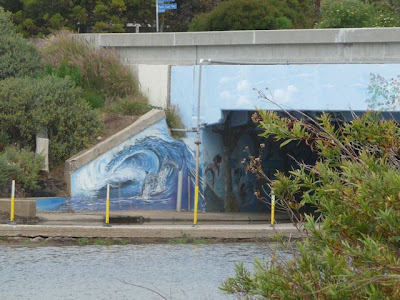 Under the bridge is a massive ocean and nature themed mural. It's actually one of the most extensive, but in my opinion, under-appreciated murals I've ever seen.
Hundreds of thousands of people drive over this bridge every year - with no idea of what they're missing. In that sense, it is like the ocean itself. 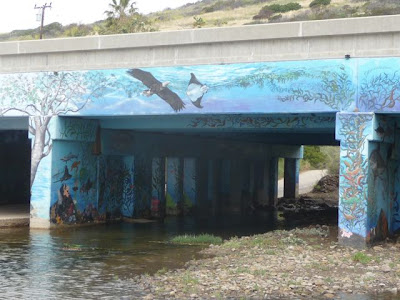 The above photo gives a bit of the size and scope of this project. 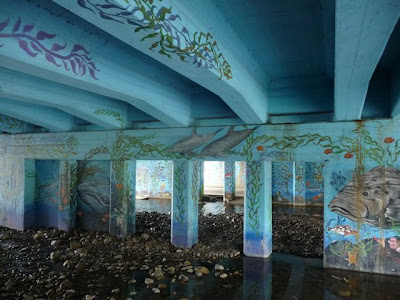 Wow. It has to be seen to appreciated! The entire mural is themed to the local natural surroundings - including the nearby marine and aquatic life. 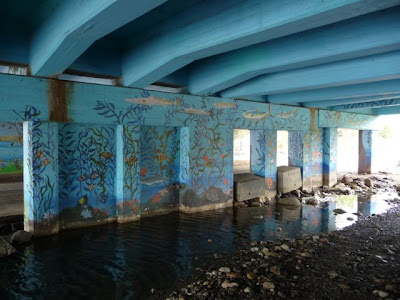 Another view. I love the vision that turned the dingy underside of a bridge into a incredible work of art. 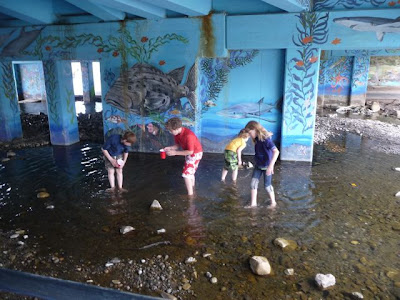 My kids and their homeschool friends thought the mural was "neat and everything" but - as kids - what they were really interested in was what they could find in the water, real or imaginary. 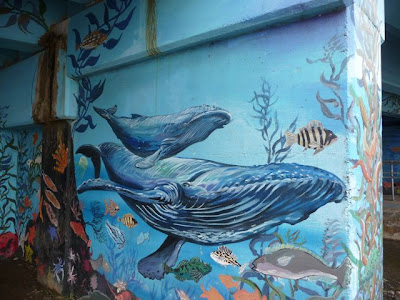 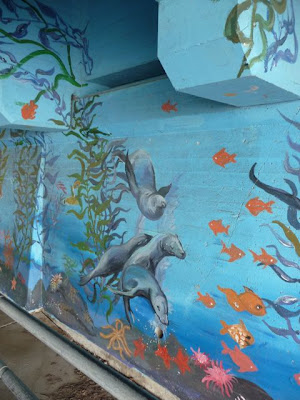 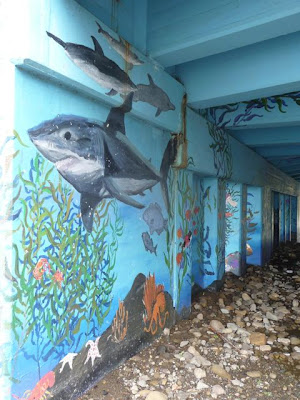 
And Dolphins.
I appreciate the mural's focus on the incredible diversity of the oceans, that is, of Creation.
As I shared in previous posts, I believe the Creation itself points to - the Creator. Both Creation and this mural point to design - and to intelligence.
Could a mural like this have come about by, say, throwing paint against the wall? By blind chance? Perhaps. But I think all of us would agree that there was a probably an artist. 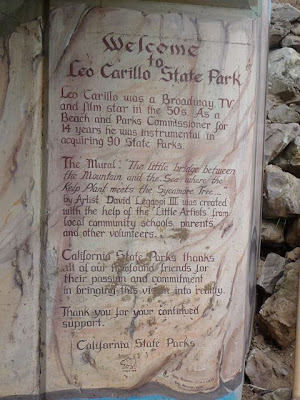 And indeed there was. The mural is the work of David Legaspi and is entitled "The little bridge between the Mountain and the Sea where the Kelp Plant meets the Sycamore Tree . . ."
The project began April 7th 2003 and was completed on May 12th of that same year.
By the way, Leo Carrillo State Beach and Park is named after former film star and State Parks Commissioner Leo Carrillo. Here's a link to their website: http://www.parks.ca.gov/?page_id=616 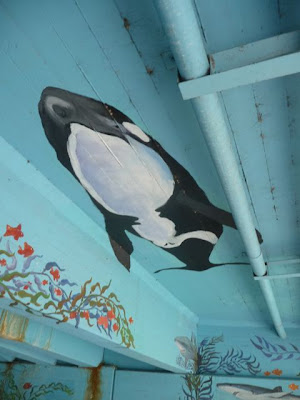 Overhead is an Orca, aka a Killer Whale. While Orcas are technically not found of the coast of Southern California, it's looked really cool and was a neat effect overhead. 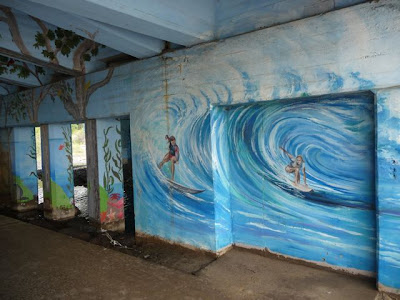 The mural also features some scenes of life above the waves, including locals surfing . . . 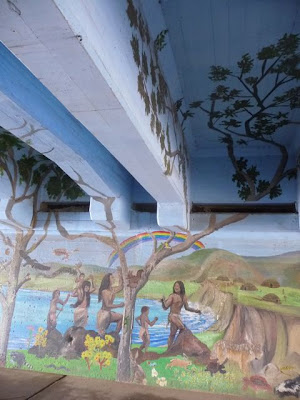 . . . and an idyllic native-American village - complete with obligatory rainbow (!) and men and women happily interacting with wild animals.
Um, while native-Americans were very aware of their natural surroundings, they also were not vegetarians. 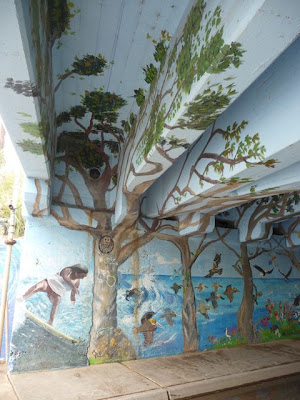 Here's a native girl surfing in and around sycamore trees.
While I appreciate the attempt to bring in the native vegetation, especially directly overhead, surfing was introduced by Hawaiians - not the local Chumash Indians. This was a little too "Dances with Wolves" meets "Endless Summer" for me. 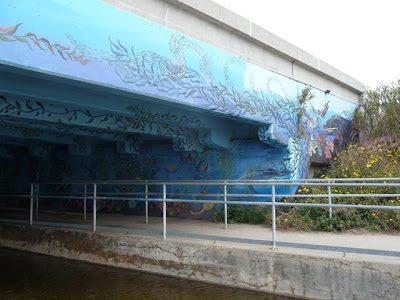 That aside, "Mountain and the Sea" is an absolutely amazing mural. If you're anywhere near Leo Carillo State Beach, or just heading north on the Pacific Coast Highway, it's worth stopping to see. 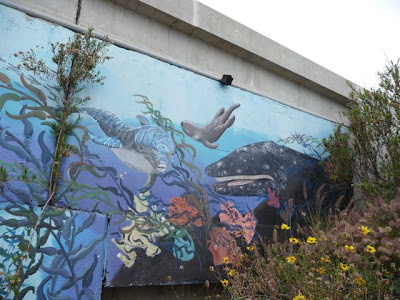 A close up of more local sea life. 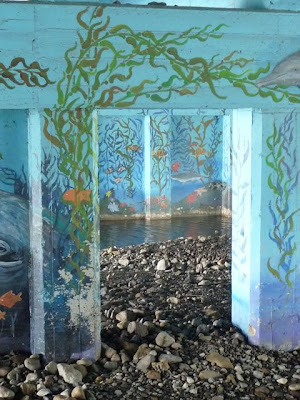 Hats off to David Legaspi and his team of volunteers for bringing this all to life.
Here's hoping it'll inspire the next generation - I'm thinking my kids and their homeschool friends - towards the protection and preservation of our coast line.
© 2010 www.experiencingla.com
.

I worked on this. David was great to work with. I paint some leaves, the wolves, the jellyfish, the octobus going into the pipe, the barracuda and the big blue whale's eye.

Thank you for sharing this. I didn't know about David's mural at Leo Carrillo State Beach. I will definitely plan on visiting. One more beautiful legacy left by David. RIP David Legaspi. What a wonderful artist, what a wonderful person.