A Boy Named Martial: The Getty Villa, Part I 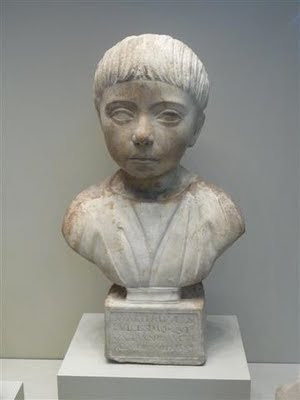 One of the most moving and impressive pieces of art in Los Angeles is a nineteen hundred year old marble bust of a young boy named Martial, located at the Getty Villa.
.
The Getty Villa is the original campus of the J. Paul Getty Museum. The museum now consists of two campuses: the Getty Villa and the much larger Getty Center a few miles away. More on that later. The Villa's collection focuses exclusively on Greek and Roman antiquities. It's an amazing place and definitely worth a visit. 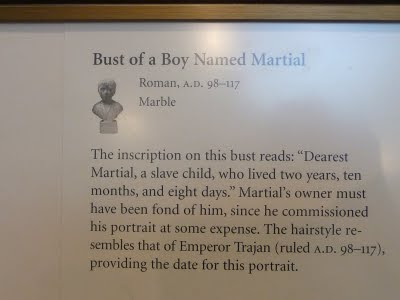 What I found so compelling about the bust of Martial wasn't just how incredibly life-like and detailed the artwork is, or the fact that this piece is almost two thousand years old, but the actual young boy behind it all.

In Rome, as today, only the very wealthy could commission artwork of themselves or their family. In contrast, this little boy, who we know as Martial, was a slave. The tombstone, paid for by his owners, tells us that he died when he was 2 years, 10 months and 8 days old.

As a father of two children, I was emotionally moved thinking of this beautiful little boy dying at such a young age. I realize that historically, death among children has been common and tragically that's true today among children in the Third World. Yet putting a name with a face, as it were, and knowing the exact age when this child died, makes it so much more real.

As a Christian, I'm reminded how un-natural death is.

I wonder about Martial's family: were they polytheists - as were most Romans - or were they followers of the one true God? Did they have a hope in eternity? Of life beyond the grave? Of the resurrection of the death?

The bust of Martial is a reminder to me that the Christianity of the 1st and 2nd centuries wasn't simply an ethical code or a way to pass an hour on a Sunday morning. It was - and is - based on the historical fact of the resurrection of Jesus Christ. The Christians of Martial's day were so convinced of this fact that they were willing to lay down their very lives for it.

I wonder if Martial's family had this same hope - or knew anyone who did. 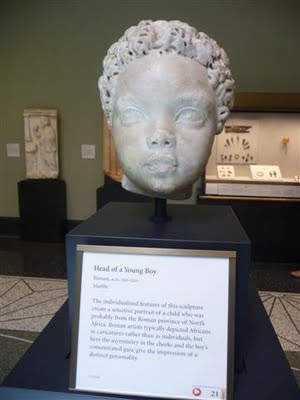 Next to the bust of Martial, is another bust of a young boy from North Africa. We know much less about him (no inscription). My question here is how was the artist able to sculpt the marble of the boy's hair so intricately and realistically? Amazing. 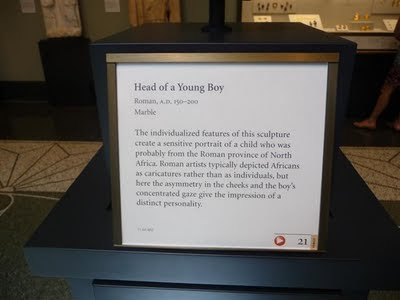 Also interesting is that while Martial, who was European, was a slave, this young boy from North Africa was free. Unlike the New World, slavery in the Roman Empire wasn't based on race. 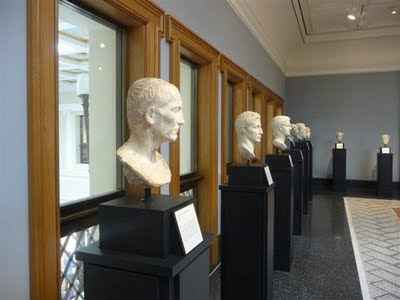 There's lots and lots to see in the Getty Villa, including these busts of wealthy or influential Romans (aka dead white males). These were the men who called the shots 2000 years ago (kind of like J. Paul Getty) ... but I was strangely moved by a little boy not yet three years old.

More on the Getty Villa in the next post.