"Open Thou Mine Eyes" - Humanities Building at UCLA 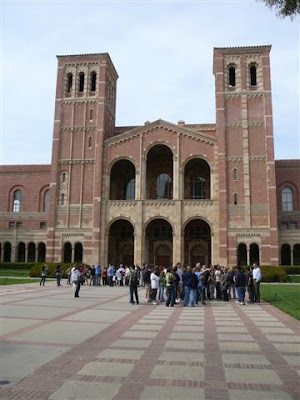 Royce Hall (pictured, above) is one of the four original buildings at the University of California, Los Angeles. Royce was built in the late 1920's (the UCLA Westwood campus opened in 1929) and was modeled after a cathedral in Milan, Italy. 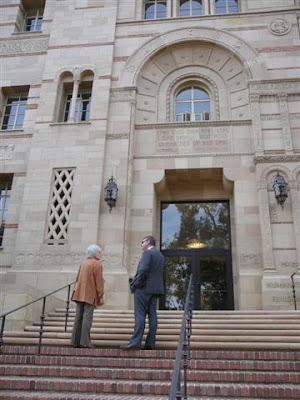 The Humanities Building, just across the main quad from Royce Hall, in another one of the original four buildings and was the first science building. The inside of the building has recently been remodeled: it now houses Humanities offices and classrooms. Above are a couple of faculty members at the east entrance. 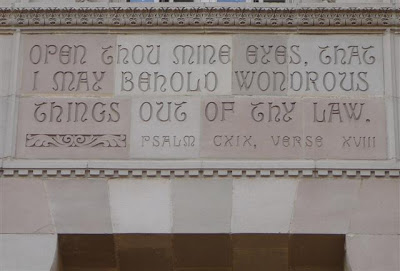 Closer inspection reveals a biblical quote above the east entrance, from the Psalms:

"Open Thou mine eyes, that I may behold wondrous things out of Thy law." Psalm 119:18

As a Christian, I appreciate seeing scripture or Biblical references on public buildings. It's a reminder of the influence Christianity has had in our nation's cultural and educational system. Sadly, it's impossible to imagine a building on a public university built today with any reference to scripture or God.

But is there ever a "down side" having scriptural references on things like public buildings? Maybe.

For me, I can find myself developing a warped, that is, an overly romanticized, view American history. That is everything in the past was good. To be sure, there is so much good about American history. But it needs to be balanced with some of the wrongs and injustices as well.

Second, I can develop a sense of entitlement about Christianity in the public sphere, that my faith somehow deserves special privledges, sort of a "most favored nation" status.

And third, I can get stuck in the past, rather than focusing on the present and the future.

Again, I appreciate public displays of Christian faith, both past and present. I just want to keep them in a proper perspective.

Is the glass half full, or half empty, in terms of Christianity on public universities like UCLA?

An entire blog could be devoted to what's happening on universities but here's something that's rarely, if ever, reported on: the growth of Korean-American campus ministries at places like UCLA.

According to Sharon Kim (Gen X Religion, Chapter 5 "Creating Campus Communities") there are 14 recognized Korean-American student ministry groups on campus. This number doesn't include at least a dozen Korean-American churches with non-recognized Bible Study groups on campus. An incredible 54% of Korean-American undergrads at UCLA are members of an on-campus ministry. At a campus-wide Christian rally several years ago, there were over 1,000 students in attendance, nearly 85 percent of the attendees were Asian- American. There are six Asian-American ministries, and four Chinese ministries. Groups like Intervarsity, Campus Crusade, and Navigators have growing percentage of Asian American (the Navigators is 80% Asian American!).

As a Christian, I am so thankful for incredible things that are happening on university campuses. To be sure, Christians of all backgrounds face challenges in terms of living out their faith on campus.

But as an older professor at USC reminded me, "today, there are so many campus ministries for students to be involved in - nothing like this existed 40 years ago."

In terms of Christianity on campuses here in Los Angeles, the glass is not full, but neither is it empty.

"Open Thou Mine Eyes" to see also the wonderful things happening on campuses here in the city.

I like your thoughfulness on the perspective of scripture on public buildings. Not being of your faith, I neither feel they should be granted special privilege nor should they be excluded.
-Frank Butterscotch