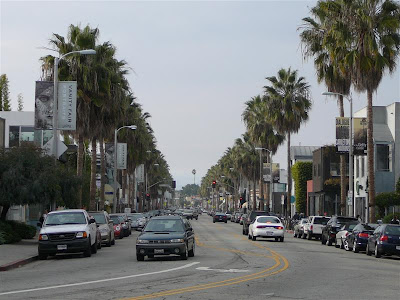 Abbot Kinney Blvd. is one of the most eclectic and unusual shopping districts in Los Angeles. "Bohemian" - not original with me - is the word I used in Part I (you'll want to read Part I first). 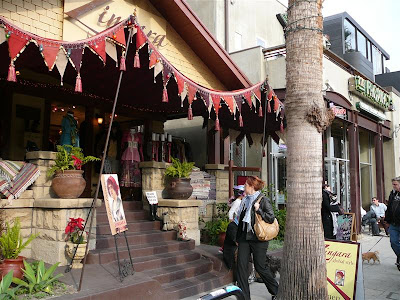 I'm still trying to figure out what Zingara (above) is. Here's their website: http://zingaratrading.com/ (their site features interesting background music). I think it's some sort of antique store, but I'm not sure. That pretty much sums up a lot of the businesses on Abbot Kinney. 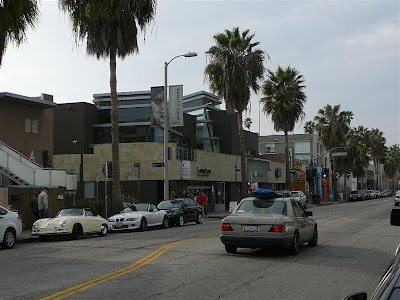 The diversity of architecture - and businesses - is amazing. It makes for a great, pleasant walk. 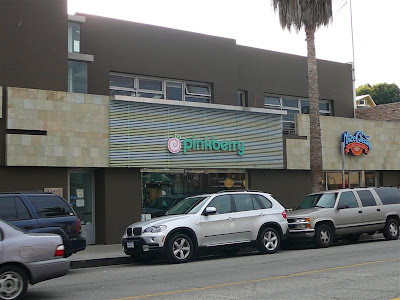 I terms of businesses, this Pinkberry Yogurt was the only "chain" anything I found of Abbot Kinney. Everything else was definitely one of a kind. More on this later. 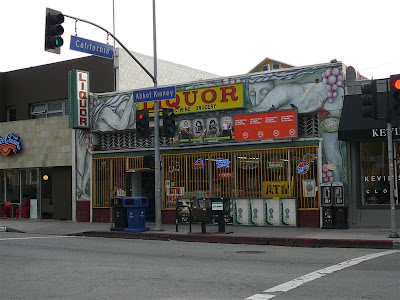 I thought this liquor store was interesting only because it was so different from the rest of the immediate community. Looks like it belongs someplace else in L.A. Definitely old-school Venice. 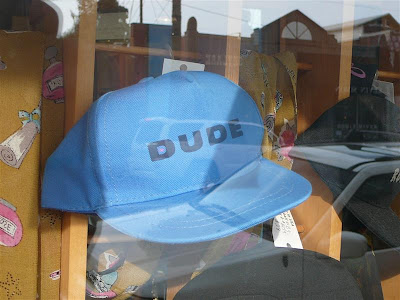 It's not just in the movies. People in California - both male and female really call each other "dude." The use is directly proportional to proximity to the ocean. It's also an expression: "Dude!" as in "Dude! I almost missed that exit!" 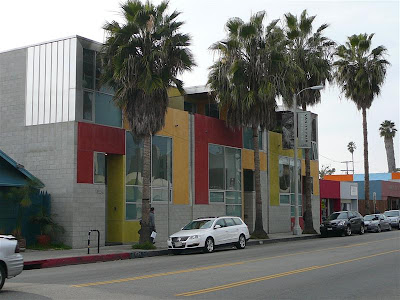 It's amazing what some color and patters do to any otherwise industrial looking building. Palm trees help, too. 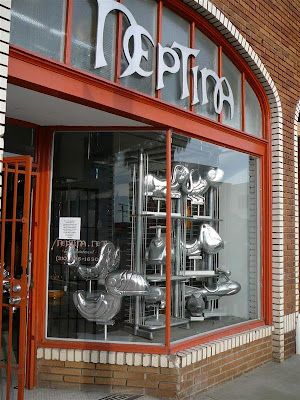 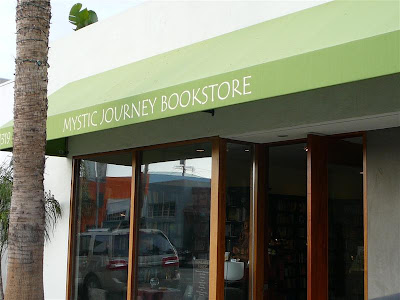 Mystic Journey Bookstore. A new-age bookstore. There were tarot cards and a crystal ball in the front window. As a Christian, I enjoy working to find common ground with individuals who consider themselves "spiritual, but not religious." 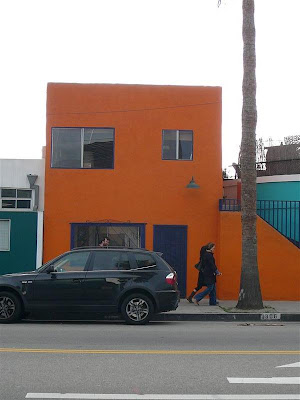 I love this color! 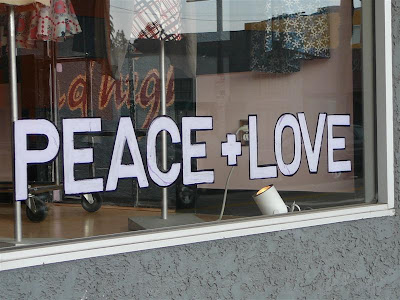 I like to think that everyone is in favor of peace and love, but maybe not. 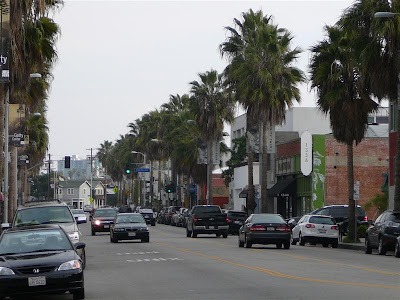 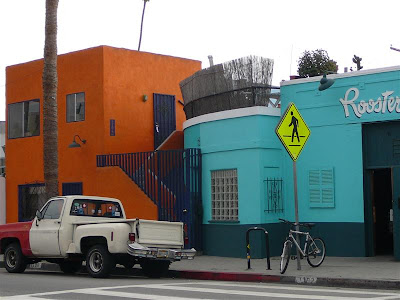 My favorite orange building - with a turquoise building next to it. Amazing was some bright paint will do to otherwise bland buildings. 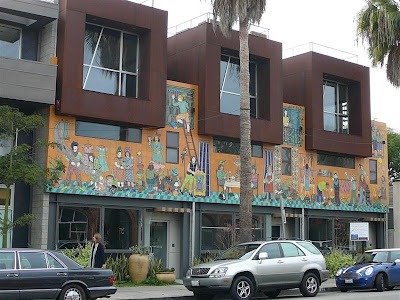 I love this tile mural - I thought this was a Jewish cultural center, but now I'm not sure. If you have a clue, let me know. 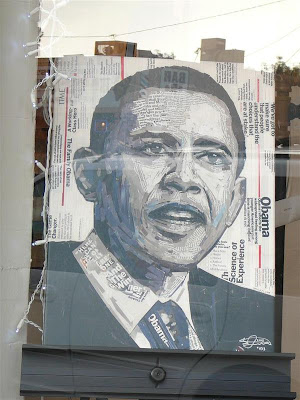 This entire poster of President-Elect Obama was made from newspaper clippings. Creative, engaging artwork. Is it OK for me to still be impressed with the historical significance of our nation's first African-American President, even if I didn't vote for him? 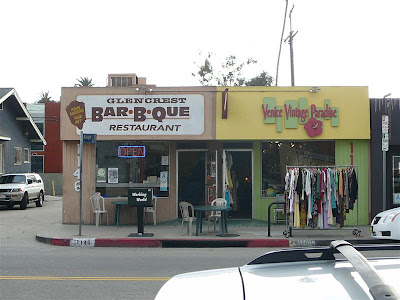 Glencrest Bar-B-Que helps balance out the "Organic Vegan" place down the street. This, along with the liquor store down the street, looks old-school, pre-gentrification Venice. 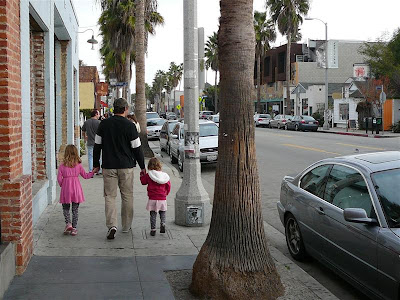 Abbot Kinney's pedestrian traffic isn't limited to adults. I think this dad is taking his daughters to Pinkberry Yogurt, or ... 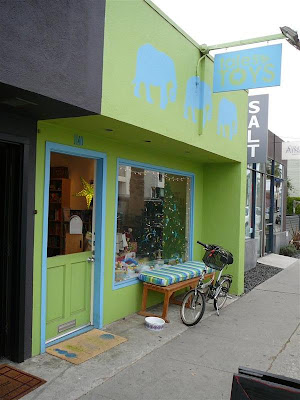 ... to Tales & Toys. Nice to know that even that even in an funky, eclectic neighborhood like Venice, you can find a toyshop. Of course, it's not Toys R Us - which might be a good thing. 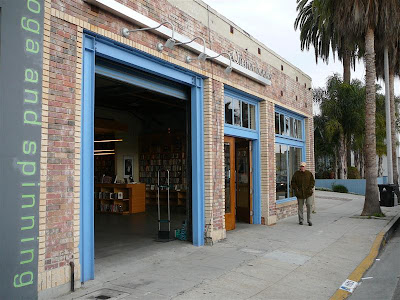 What looks like a former auto repair or garage is now a ... bookstore. Makes perfect sense. 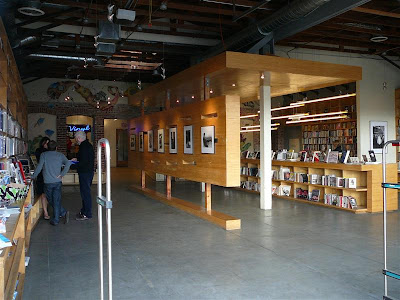 Inside: artistic, open, with books (I'm guessing) won't find at Barnes & Nobel. I was running out of time, so I didn't go in. 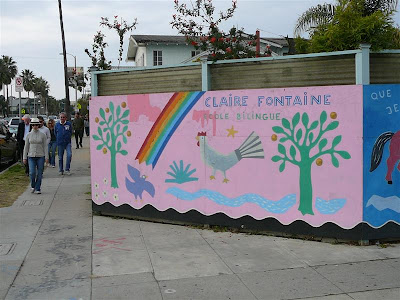 Towards the end of Abbot Kinney is a small bi-lingual private school (French). 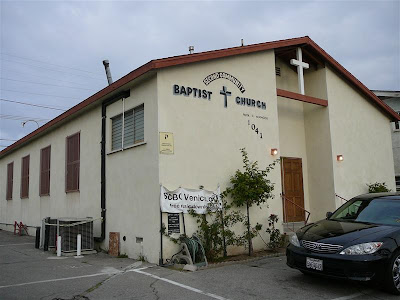 And a church. A web search didn't give too much information (unfortunately they don't have a website). From what I can surmise, Second Community Baptist Church is a historically black church serving Venice. I'm not familiar with them, but I appreciate seeing a church in the community. 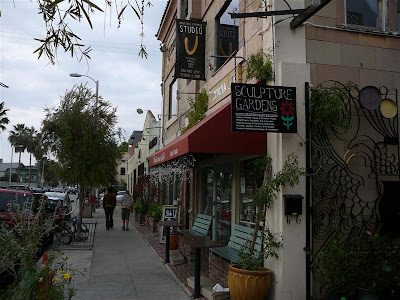 Another block - and then I turned around (at Brooks) and headed back. A helpful overview of Abbot Kinney can be found at http://www.abbotkinneyonline.com (thanks to John for this link). 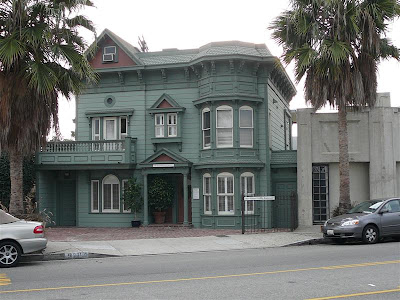 Across the street I noticed what is actually an small office building. See what you learn on foot? I've driven by this building over a hundred times, never knew what it was. My guess is that is a restored, historic home ... although it could be a new building designed to look old. 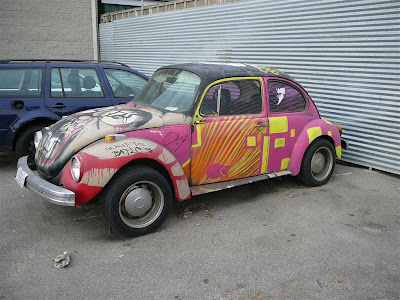 Having owned two VW bugs, I had to get a picture of this. I'm not sure where the paint stops and where the graffiti begins, but for some reason this car did not look out of place in the neighborhood. 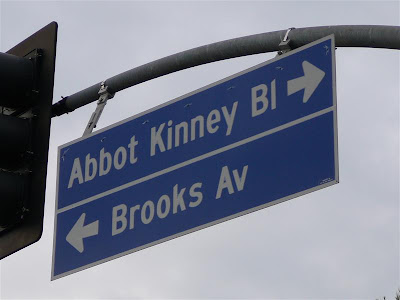 Abbot Kinney ends at Brooks Ave (a few blocks from the beach). Time to head back. 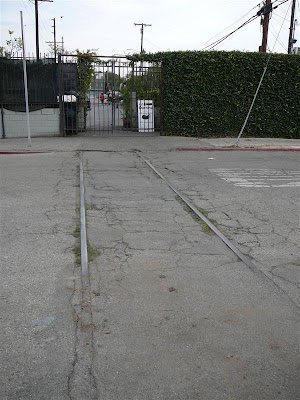 Walking back to my car I noticed these old tracks running parallel to Abbot Kinney. My guess is they're a piece of the Red Car Line that use to run between downtown Los Angeles and Venice. The convenience of private automobiles doomed the Red Cars after WWII (subject for another blog). Ironically, the tracks are now covered by a narrow parking lot. 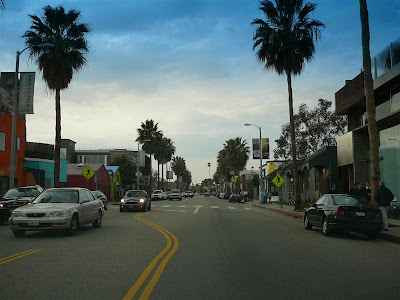 A view through my windshield - a final look heading home on Abbot Kinney.


What's the appeal of Abbot Kinney? Why is walking up and down the street more enjoyable than a trip to the (yuck) mall?

While many (but not all) of the stores are just too "funky" for my taste, I really enjoyed my time walking up and down this street. So what's the appeal?

Perhaps it's simply the variety of shapes, sizes, styles, colors, textures, and ages of the buildings and shops up and down the street. Yet no one building dominates - each one seems to work in concert with the others. This didn't happen by accident. There's a reason why (with the exception of Pinkberry Yogurt) there aren't any chain restaurants or stores: there's a culture, and both written and un-written rules, that make Abbot Kinney what it is today.

As a Christian, I wish more churches functioned like that (some actually do!). Each member exercising his or her God-given gifts and talents. Unique, but working together. Colorful, different, and a variety of ages and styles. Yet sharing a common faith and purpose. Working together in concert. Both unity and diversity. A strong sense of community.

Almost 2000 years ago, the Apostle Paul wrote to churches in the cities of Ephesus and Corinth:

"Make every effort to keep the unity of the Spirit through the bond of peace." Ephesians 4:3

Something, perhaps, to think about the next time you walk - or drive - down Abbot Kinney.

I enjoyed your look at Abbot Kinney streets. LA has a unique culture that is clearly seen in Venice. It is one of my favorite places in the city.

You have a great eye to catch the interesting and in its own quirky way, attractive.

Los Angeles is about diversity, which is cool. But somehow to me this trip down Abbot Kinney also says something else. Everyone is so trying to express their uniqueness, but yet there is a common theme. Everyone seems to be searching to be noticed, to be important, to be valued. That is the common theme.

It is through knowing Jesus that we achive our true value because He gave up his most valuable possession for us, his life.