Occasionally, I hear someone refer to Los Angeles (or Southern California) as a "desert." We lived in Arizona for four years: Los Angeles is NOT a desert.

None the less, a couple of recent rainstorms caused me to pull out the camera and snap some pictures. Taken through the windshield while driving is an interesting effect. Is it legal to take pictures while driving? I guess as long as you're not on a cell phone. 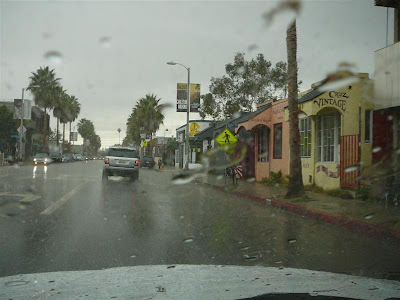 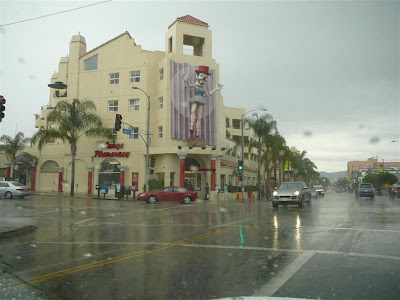 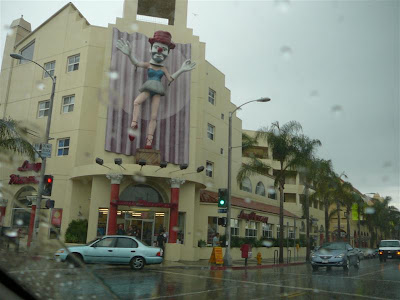 Long's Drugs, Venice (I think every drugstore needs a clown) 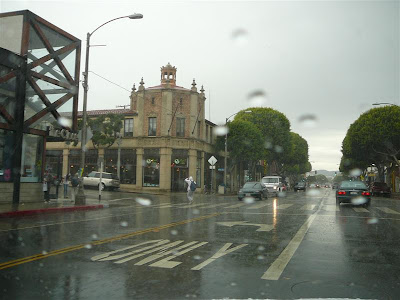 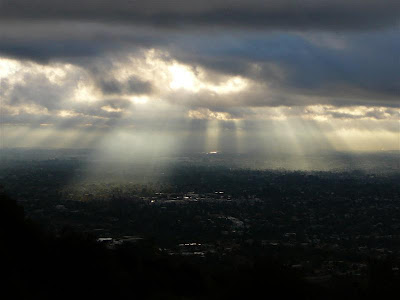 Los Angeles has a Mediterranean climate with the vast majority of the precipitation coming from mid-December to mid-April. It's actually an ideal climate, at least, I like to think it is (otherwise, why would I even be writing about it?) It's found in only four other places on earth: the Mediterranean (hence the name), the central coast of Chile, south Africa, and western Australia. If you're new to Los Angeles, here's an interesting link to our understanding the weather here: http://www.you-are-here.com/info/weather.html

The weather in Los Angeles has influenced everything from our center of the motion picture industry, to the paving over of the Los Angeles River (topic for another blog), to our imported water via the Los Angeles aqueduct (topic for still another blog), to what is often referred to as the L.A. "lifestyle." There are few other places on earth where you can go skiing, surfing (and, according to this Los Angeles Times link, hiking) in one day http://www.latimes.com/theguide/outdoors/la-trw-oneday03-2008may03,0,4703866,full.story

Sunshine and rain. God gives us both. Theologians refer to this as "common grace."

"He [God] causes his sun to rise on the evil and the good, and sends rain on the righteous and the unrighteous."
Jesus, the Sermon on the Mount (Matthew 5:45)

Making an early rainstorm even more appreciated.
Posted by David from L.A. at Saturday, November 08, 2008

Do not climb the tower with the clownarina! If i see you up there while riding by, I will crash my motorcycle.

thanks, Kim. Glad to know someone is reading this.
No towers, lately. But that would make an interesting blog ... always fun letting UCLA students know I've been on the top of Powell, one of the Royce towers, the steam tunnels ... the Hollywood sign. A wife and kids puts a damper on fun urban activities like that.