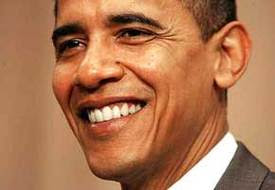 "For those Americans whose support I have yet to earn, I may not have won your vote tonight, but I hear your voices. I will be your president, too."
President-Elect Barack Obama 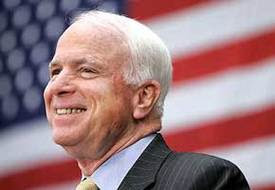 "This is a historic election, and I recognize the significance it has for African-Americans and for the special pride that must be theirs tonight."
Senator John McCain in his concession speech 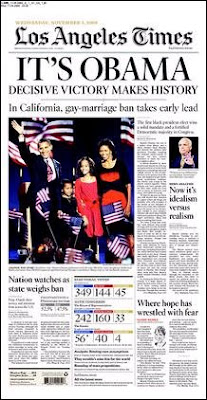 While conservatives may disagree with much of Obama's policies and political philosophy, I hope we can agree with McCain's comment: the election of an African American to our nation's highest office is an incredibly historic, amazing event.

There are plenty of political blogs out there, some good - some not so good.

Should Christians, followers of Jesus Christ, be involved in politics? I certainly hope so. But what does that look like - or perhaps a better question, what should that look like?

Cal Thomas is no lightweight. He is America’s most widely syndicated op-ed columnist, appearing in more than 600 national newspapers. He was the vice-president of an organization known at the "Moral Majority" from 1980-85, and later co-authored "Blinded by Might" - a critique of that experience.

In light of that, I came across his most recent column. Here's a clip:

Evangelicals are at a junction. They can take the path that will lead them to more futility and ineffective attempts to reform culture through government, or they can embrace the far more powerful methods outlined by the One they claim to follow. By following His example, they will decrease, but He will increase. They will get no credit, but they will see results. If conservative Evangelicals choose obscurity and seek to glorify God, they will get much of what they hope for, but can never achieve, in and through politics.

The entire article can be found at:
http://www.calthomas.com/index.php?news=2419


Regardless of how you feel about the outcome of Tuesday's election, Christians - those who consider themselves politically conservative, liberal, or somewhere in between - should remember the words of St. Paul:

"Everyone must submit himself to the governing authorities, for there is no authority except that which God has established. The authorities that exist have been established by God. Give everyone what you owe him ... if respect, then respect; if honor, then honor." Romans 13:1,7

"I urge, then, first of all, that requests, prayers, intercession and thanksgiving be made for everyone - for kings and all those in authority, that we may live peaceful and quiet lives in all godliness and holiness." I Timothy 2:1-2

Kudos, Dave, for seeking to view this election as more than just a vote on conservative Christian beliefs. Our country has suffered terribly for nearly eight years while there has been a president and administration who supposedly had these beliefs. Meanwhile, the environment, and the poor and dispossed were at best ignored, and more regularly trod upon. While I could go on and on about the worst president in our nation's history, it is time to go forward, as I think you are calling for. Christian values such as compassion for the poor and the meek are not the province of "conservative" or "liberal" or "mainstream," but rather the core of Christ's values as we see through His ministry. President-elect Obama will take office at an extraordinarily crucial time in our history--much more so than any president since Truman (WWII) or FDR (Depression)--so his leadership skills will be tested from Day One. Let us hope and pray that our new president will be able to meet head-on the tasks at hand, while not losing sight of the very reasons so many voted for him. God's Son did not come for the Moral Majority or the UUers, He came for all of us. Peace, Gene