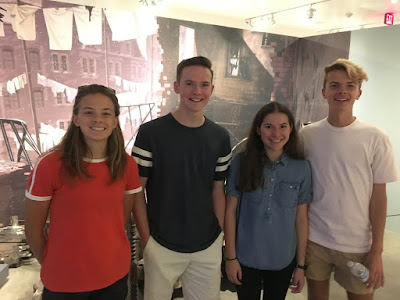 Last Fall, my wife and I took our teenage kids, and their two cousins, to the Warner Brothers Studios tour. Here's a couple of links to Part I and Part II of our time there. 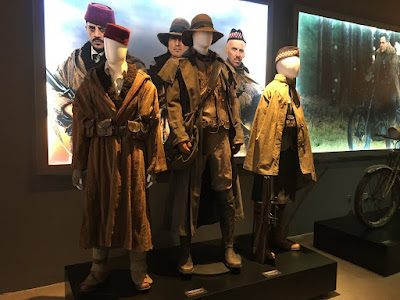 Half way through the tour, we stopped for 30 minutes or so at an on-site studio museum, featuring costumes, set design and models from the 2017 film Wonder Woman. 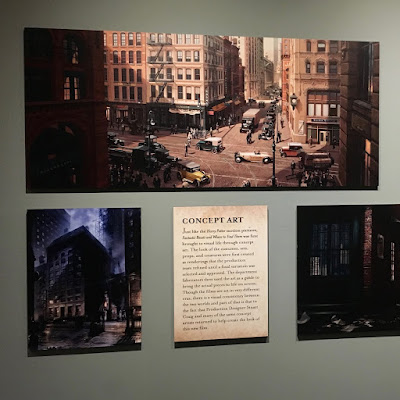 Concept art from the 2017 Warner Bros film Fantastic Beasts and Where to Find Them. 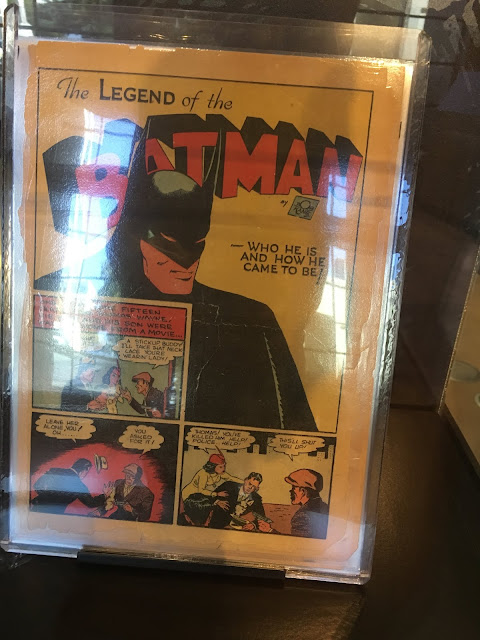 Warner Brothers has been involved in bringing Batman to the big screen since the Michael Keaton / Jack Nicholson film in 1989. Actually, the earliest screen version of Batman dates back to the 1943 black and white 15 part serial, released by Columbia Pictures. 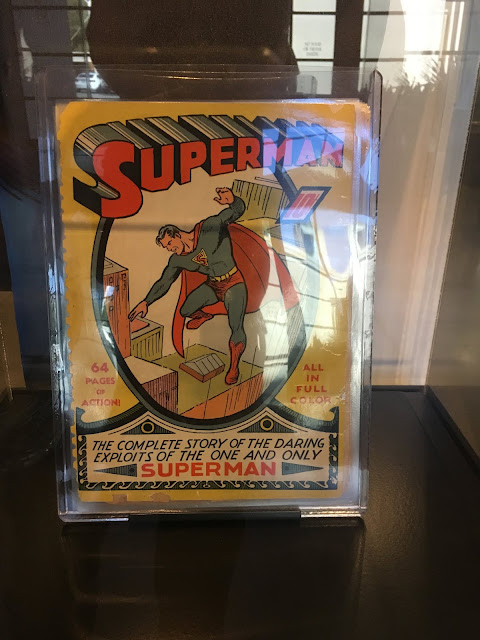 Warner Brothers has been producing Superman films ever since the 1978 version starting Christopher Reeves and Gene Hackman. 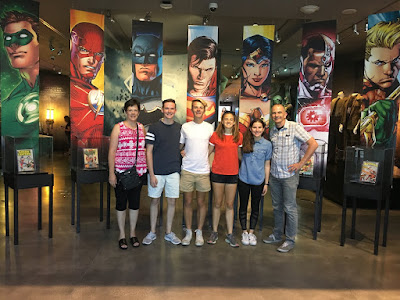 My wife and I with our kids and their cousins in from early comic book versions of Batman, Superman, Wonder Woman, and the rest of the DC Comic gang. Apparently, a near perfect version of the orignal 1938 Superman Comic book sold in 2014 for $3.2 million. 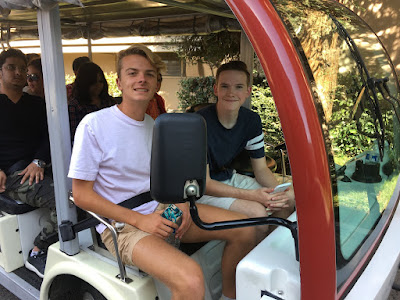 Back in the studio van: my son (left) now at San Diego State, and his cousin, now at Belmont University in Nashville. 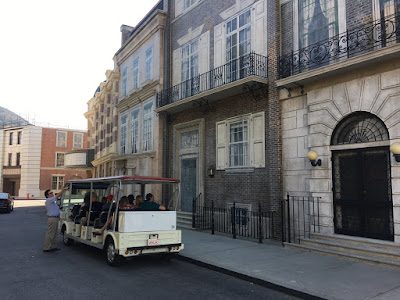 Passing by another studio tour. The 15 passenger electric car was similar to ours. 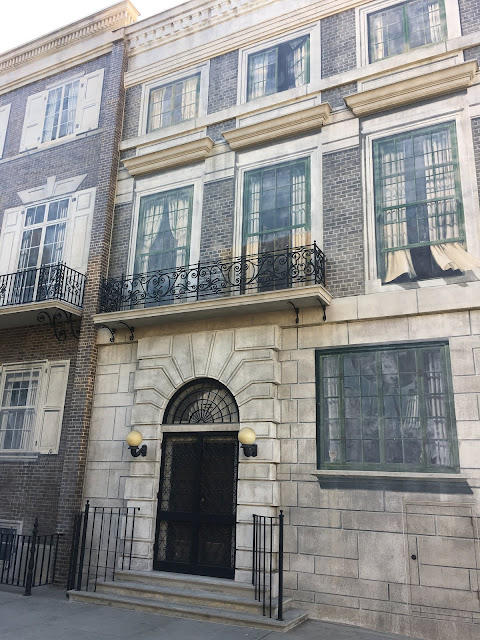 The side of a building doubles for an outdoor set - featuring painted backdrops along with metal balcony and railings. 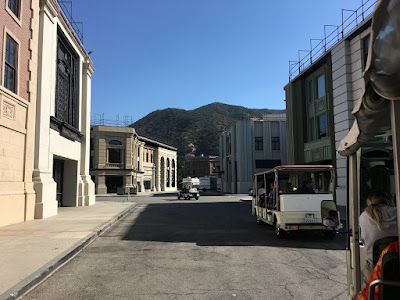 Headed towards the outdoor New York Street sets - with the "backside" of the Hollywood Hills in the distance. The otherside of that hill is Hollywood proper. Warners Bros - along with Disney and Universal - are located in the San Fernando Valley, a few miles north of Hollywood. 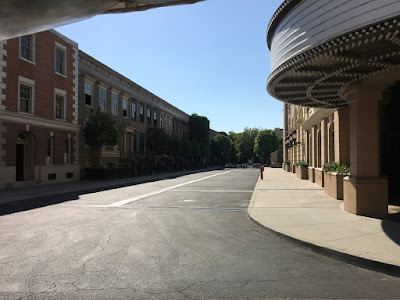 Brownstones on the left, theater on the right: New York Street. 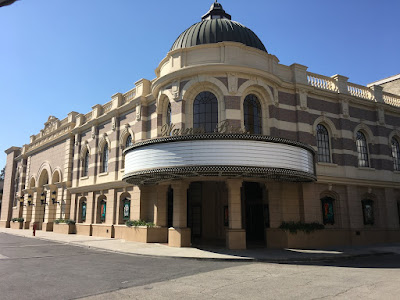 A better view of the theater. 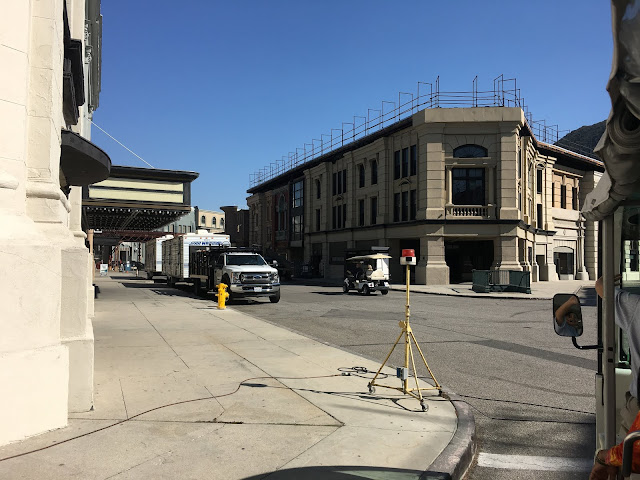 Another theater to the left. The metal railings along the tops of the buildings are for lighting and sound equipment - and a reminder that these building are false fronts.

Above, the facade used as the hotel where character Leon Kowalski lived in the 1982 Ridley Scott film Blade Runner. 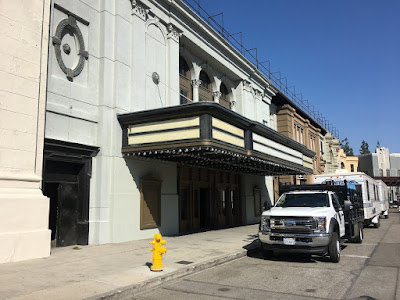 A couple of trailers in front of the theater set. 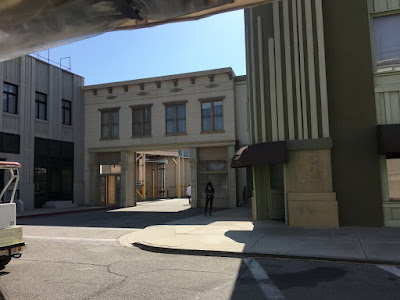 The front - and back - of the New York Street sets. 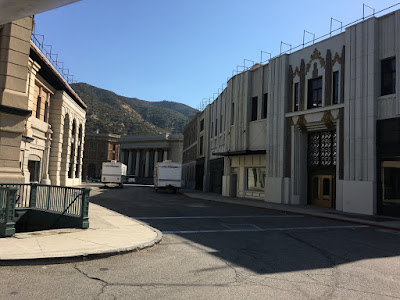 The grey building, the pillars, in the distance was used for numerous films and movies - including Gotham City Hall in the 1960's Batman TV series. Tight angles allowed for the Hollywood Hills to be blocked out. 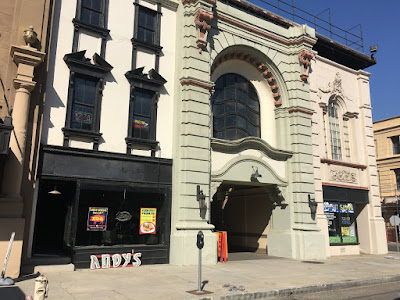 Movies and television shows that were filmed here include: 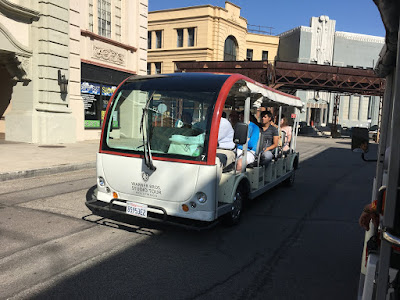 Another tour rolling past us, with the faux "El" train track used in shows like ER. 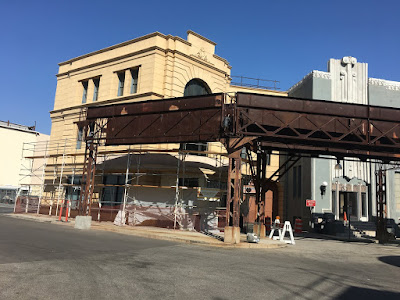 Another view of the "El" tracks. In the center of this photo, slightly obscured steel girder, was the entrance to Chicago General Hospital, from the ER television show. 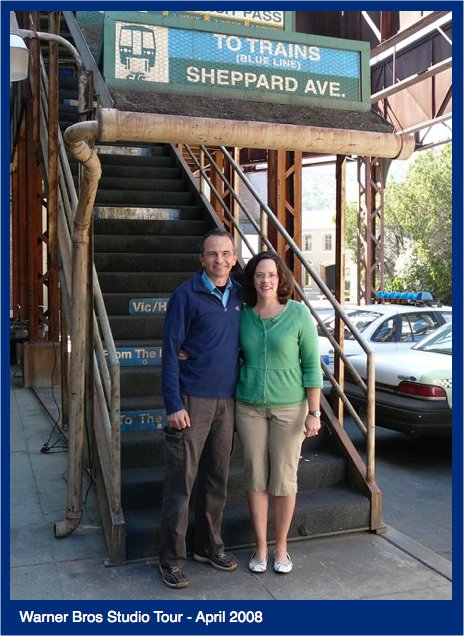 When my wife and I were at Warner Bros the first time back in 2008 (above), our tour included a lot of time walking around and exploring these ER sets. Here's a link to a previous post from time there. 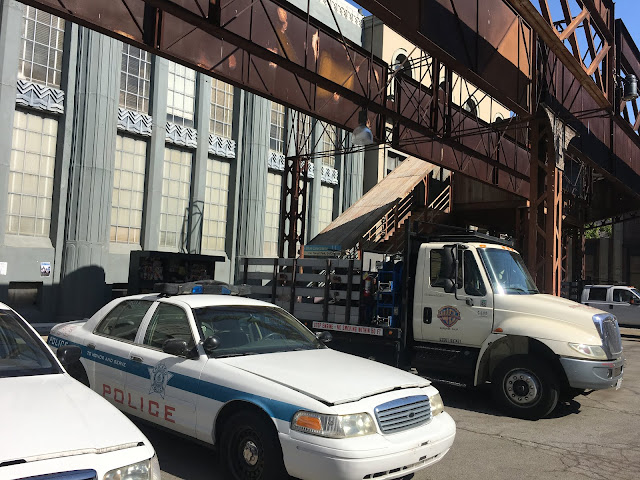 Warner Bros version of a Chicago Police Car, under the faux "El" tracks. 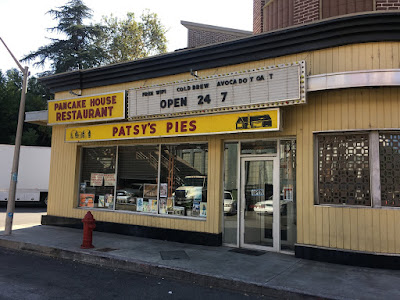 The diner across the street. According to the website DiscoverLosAngeles.com:

"In the mid-1990s, a large Chicago-themed set consisting of a hospital façade, an ambulance bay, and “L” tracks was constructed on the eastern edge of the WB’s New York Street for the filming of the television series ER. A diner façade was later built directly across from the hospital facade to mask as Doc Magoo’s, the after-work hangout of Doug, Mark and the rest of the Cook County General gang. Doc Magoo’s, which later became the Jumbo Mart, is a practical set and filming took place both outside and inside the structure. During ER’s 15-season run, emergency room and train station signage were posted on the various façades, making them instantly recognizable to tour-goers. Though those signs are no longer in place and despite some alterations, the edifices should still be familiar to fans of the series. Since ER went off the air in 2009, the Chicago sets have gone on to star in many other productions, including Pretty Little Liars. The Jumbo Mart most notably got a second life as both Kash and Grab and Patsy’s Pies on the Showtime hit Shameless."