Angels Flight: (Finally) Back on Track 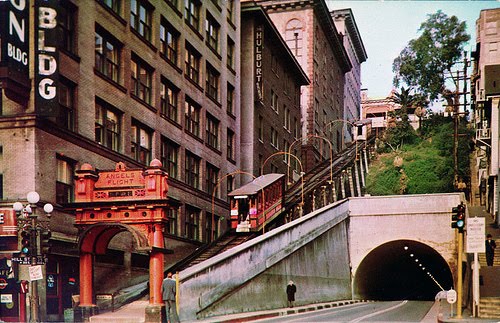 The photo above shows Angels Flight at it's original location, a half a block away next to the Third Street Tunnel. It originally opened in 1901, serving as a mode of transportation to the top of what was then the residential community of Bunker Hill. 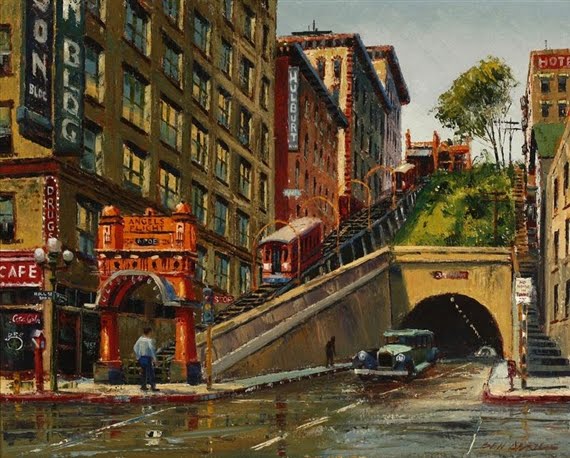 Over the years, it's been the subject of numerous painting, including this one of by artist Ben Abril. 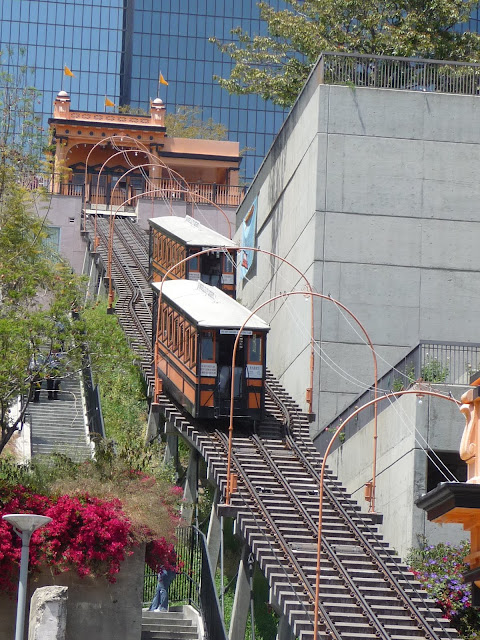 Back in May 2010, when my wife and I were living in Los Angles, we took our kids on the 50 second ride to the top of Bunker Hill on Angels Flight. We included this, along with a visit to a pre-gentrification Grand Central Market on a trip to downtown L.A. with some other westside home schooling friends.

The two bright orange and black cars traveling up and down the hill are named Sinai and Olivet, names taken from the Hebrew and Christian Scriptures.

A plaque installed to celebrate it's 50th anniversary stated that: "Angels Flight has carried more passengers per mile than any other railway in the world, over a hundred million in its first fifty years."

In 1969, after 68 years of service, it was "temporarily" closed, scheduled to be moved to it's current location and reopened within two years.

The cars went into storage and the promised deadline came and went. Two years turned into ten. Then fifteen. Then twenty. Finally, in 1996 - twenty seven years after it was closed - Angels Flight finally reopened. 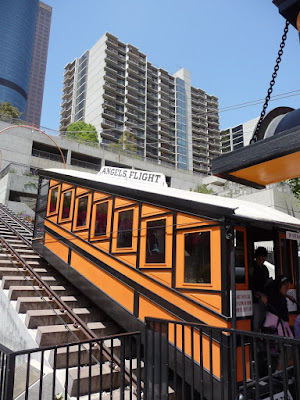 Unfortunately, a change in the original 1901 design resulted in a fatal accident in 2001.

Angeles Flight was closed. Again. This time was for another nine years. It finally reopened again on March 15, 2010. These photos were taken a couples of months after the reopening. 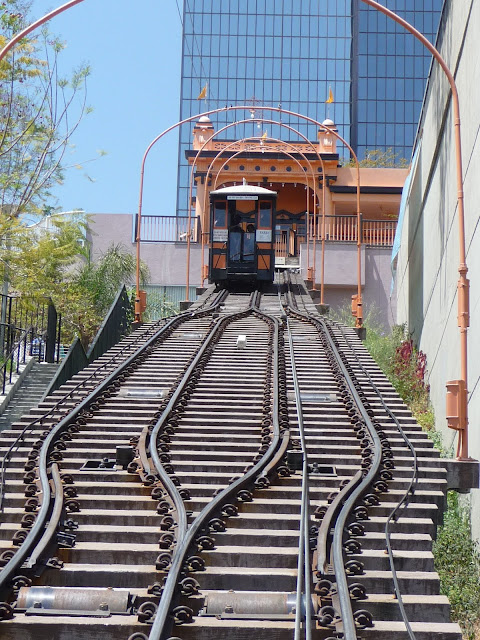 Another accident. Another closure. In 2013, an accident (with no injuries) resulted in Angels Flight being closed. Again. 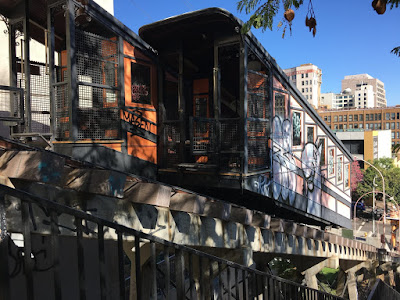 This was Angles Flight in September 2016. My family and I were visiting The Broad art museum (subject for a future post) and walked by it. Non-operative, with no date for re-opening. 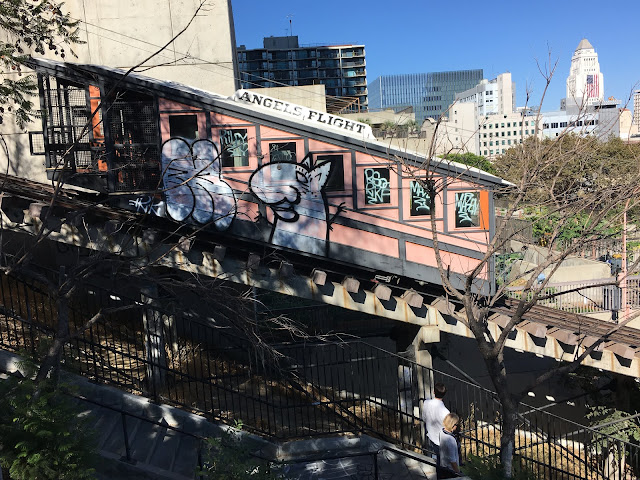 Oh, and did I mention, covered with graffiti?

The above photo's features Angels Flight with L.A.'s City Hall in the distance. I don't want to go all political, but seeing a historical monument broken down and tagged does not instill confidence in the ability of local government to get things done. 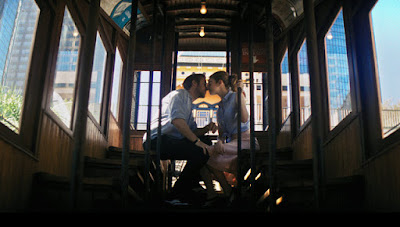 The 2016 film La La Land featured a brief clip of stars Ryan Gosling and Emma Stone on a beautiful and functioning Angeles Flight. This is how it's suppose to be: things are suppose to work, not languishing for years while the city drags it's feet. What City Hall could not do, Hollywood was able to pull off - at least for a day of filming.

On March 1, 2017, Mayor Eric Garcetti announced that Angels Flight would be re-opening "before Labor Day." Did the cameo in La La Land put pressure on City Hall to get going on the needed repairs? Perhaps. It certainly didn't hurt.

Hard to believe, but Angels Flight reopened two days ago, on Thursday August 31st. As promised, "before Labor Day." 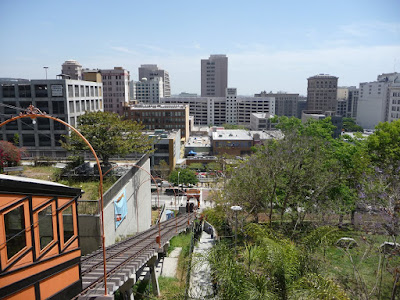 Back to my May 2010 photos, from the top of Angeles Flight, looking south. 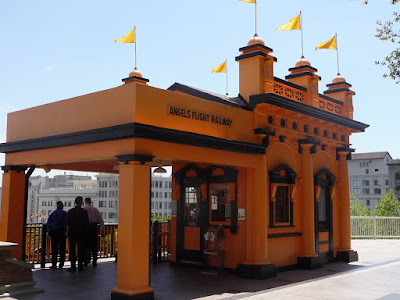 This is the upper station. Fans of La La Land will recognize this is where Emma Stone and Ryan Gosling (Mia and Sebastian) got off - exploring more of the city's historic treasures. 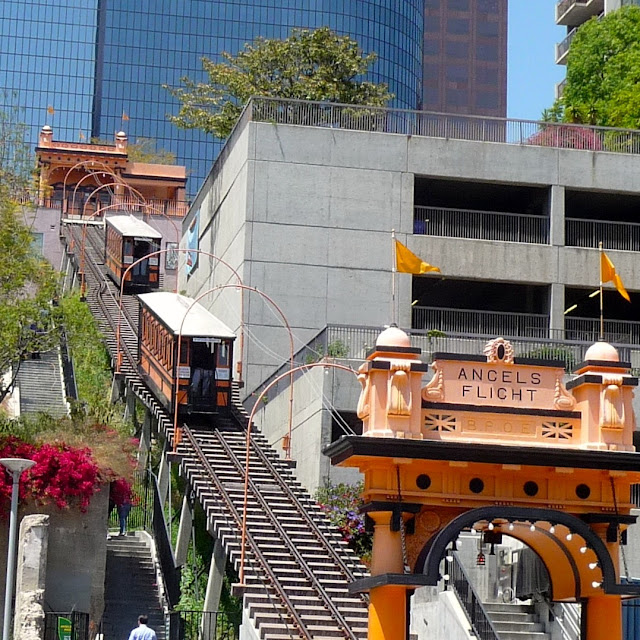 My kids were in 2nd and 4th grades back in 2010, back when we took our first and only ride on Angels Flight. 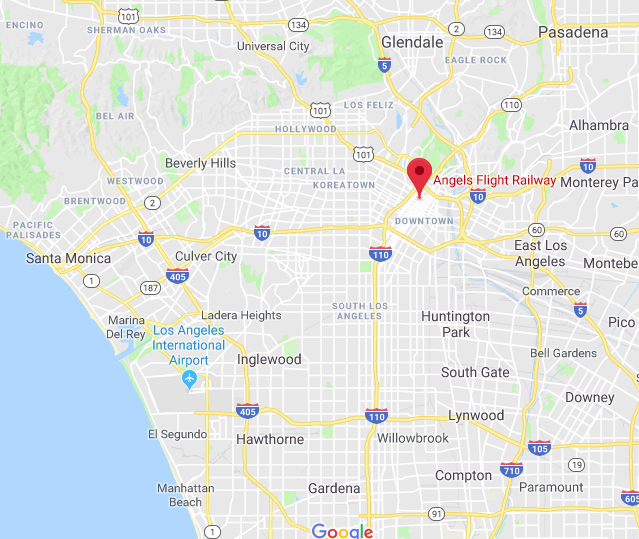 Seven years later, they're both in High School (a Sophomore and a Senior). Here's hoping we can all get down to L.A. and take one more ride before they take off for college.