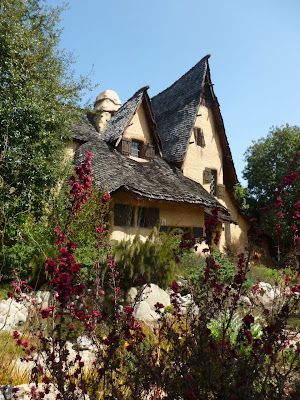 The Spadena House, popularly known as "The Witch's House," is one of the most unique private residences in Los Angeles. In March of 2013 my wife, kids and I were back in Los Angeles for a little three day get-away. Here's a list of everything we saw and did, including two other homes featured in TV shows or movies: the Greystone Mansion, and the Brady Bunch House.

The Spadena House, technically located in Beverly Hills, was originally built in 1921 to serve as the offices and dressing rooms for a film studio in Culver City, and was moved to its present location in 1934. The first residents of the 3,500 square feet home, the Spadena family, lent the house their name.

The converted private home, with its pointy, lopsided roof, tiny windows and stucco with a distressed paint job were then surrounded by an intentionally overgrown English-style garden and a moat-like pond. Eventually, the pond was filled by the second owners. By the time the house came on the market again in 1997, it had fallen into disrepair. Because of the value of its prime location, it was unable to immediately find a buyer uninterested in a teardown of the property. Consequently Michael Libow, a real estate agent, who did not want to see the home torn down, purchased it and began a gradual renovation.

The home is located on the corners of Walden Drive and Carmelita Avenue in Beverly Hills. I grew up in Los Angeles. I went to UCLA, just two miles away. I've driven (or walked) along Wilshire Blvd - just one block away - hundreds of times. HOW IN THE WORLD DID I MISS THIS?

The residence still appears to this day in movies, including 1995's Clueless. The has been called a precursor to Walt Disney's concept of Imagineering, whereby stage sets become fully realized environments. It remains a landmark, included in tours of the area. Many thanks to the wikipdeia article for information on this post.

Remember, like other homes in metro Los Angeles, this is a private residence. If you stop by, go no further than the sidewalk and please be respectful of the neighbors and neighborhood.

Next week is our final stop: The Skirball Center in Brentwood. 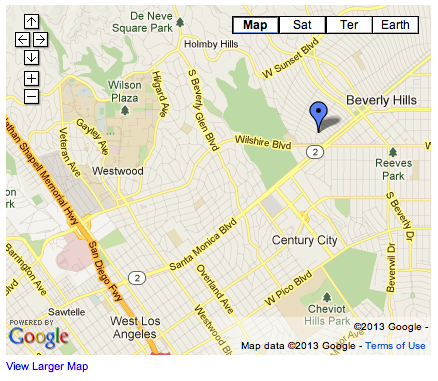