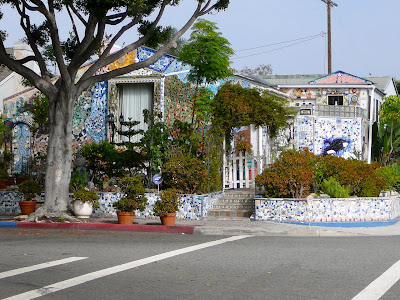 One of the most unusual homes in Los Angeles is the Farnam Mosaic House, located at 26th Street and California Avenue in Santa Monica. It's unlike anything I've ever seen before. 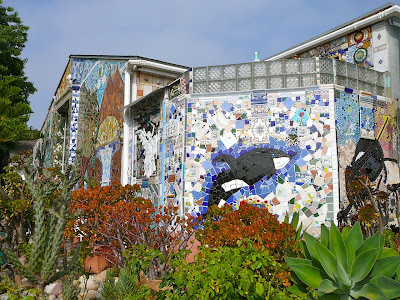 Quirky. Weird. Beautiful. All these describe this amazing home. Love it. 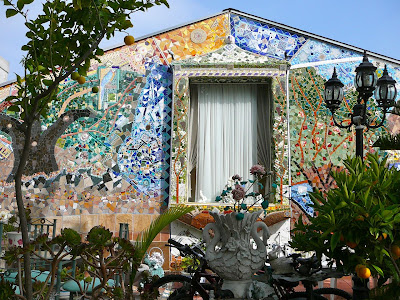 The home is the private residence of Aziz and Louise Farnam.

According to www.TravelsWithTwo.com, Aziz is a Jewish expatriate from Iran who has lived in Los Angeles for 30 years. He and His wife Louise have raised six children. In 2002 Louise's new found passion for mosaics transitioned from a hobby to a family business Custom Mosaic Art. That same year, Louise and Aziz began to cover their home with their artwork - inside and out. 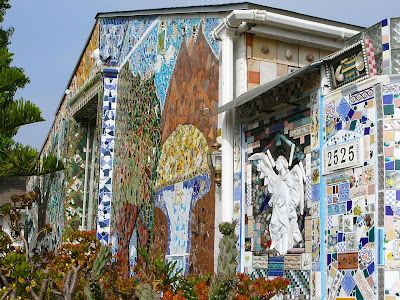 The front door is to the right. 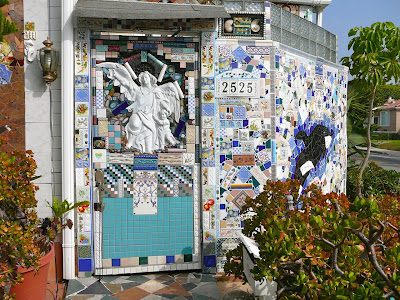 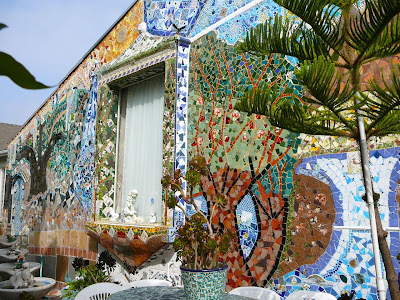 Another view of the front door. Wow. (I wonder how much it weighs?)

Another view of the front of the house. Like the tree(s)? 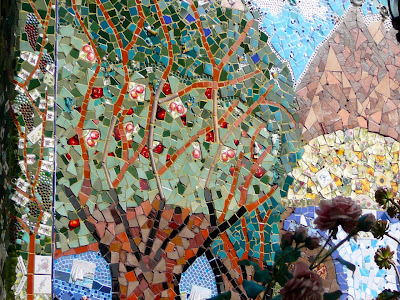 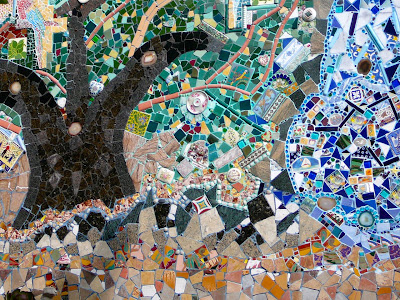 Not sure how the neighbors feel about this all, even with the normally "live and let live" vibe of Santa Monica. 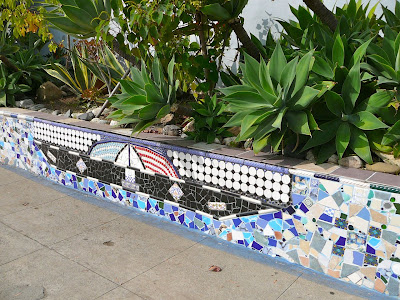 The planter along the side of the house on 26th Street. 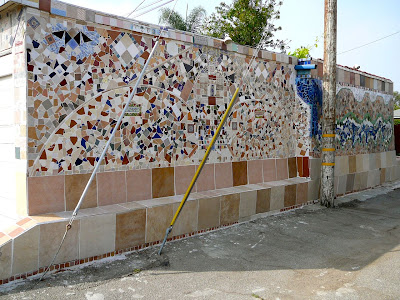 The back of the home is along an alley - equally as amazing. Not surprising, the home has been featured in both the Los Angeles Times and the New York Times. 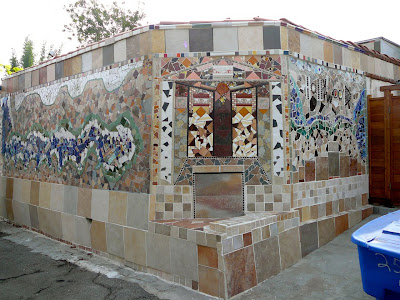 More detail from the alley. 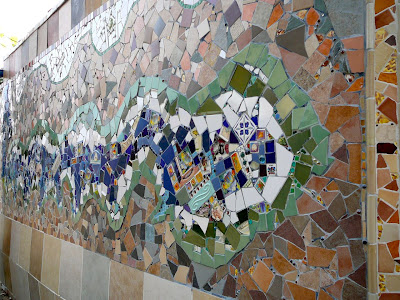 Another view. In many ways, the Farnam home is a westside (that is, the "westside" of Los Angeles) version of the celebrated Watts Towers in south Los Angeles. Here's a link to a previous post on a visit there. 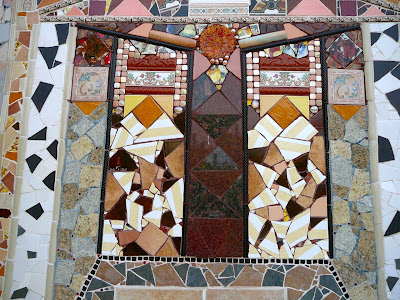 I'm curious what some of these designs are, such as the one above. 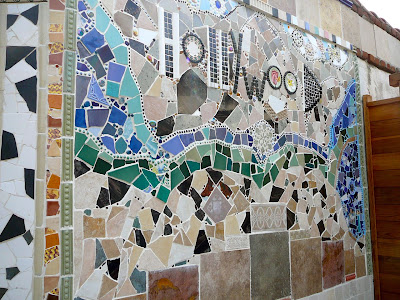 No question here - a salute to the nearby Hollywood Sign. 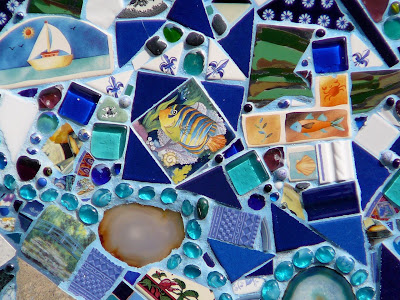 Returning to the front of the house, more fantastic detail. Really like the aquatic theme! 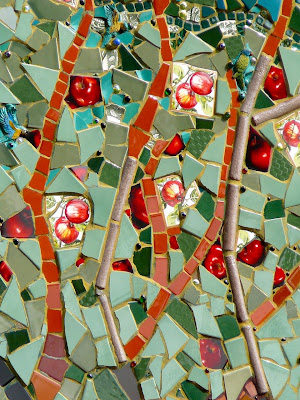 And the tree. And LOVE the two different apple designs that the Farnams worked in. 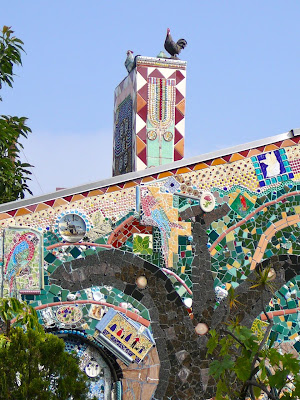 The chimney, along with various designs on the front of the house.


What can I say? I love this home: unique, beautiful .... and serving as a reminder that design points to a Designer. What do I mean by that?

As a college campus minister, my thoughts are the same today as when I first blogged about this in July 2008:

Buildings - whether beautiful or ugly - do not simply "appear." In fact, random forces of nature, like a tornado, destroy rather than create.

Design, whether the original building or the tile mosaic now covering it, equals intelligence. None of us would drive by this (or any) home and think "hey, look what happened by chance."

Almost 2000 years ago, the Apostle Paul wrote to Christians in the large, cosmopolitan city of Rome: "For since the creation of the world God's invisible qualities - his eternal power and divine nature - have been clearly seen, being understood from what has been made ..." (Romans 1:20). In other words, a creation means a Creator. I'm reminded that while Christianity is more, much more, than this - it starts here (and this is good place to start). 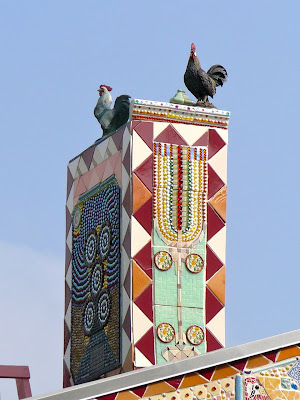 Another view of the chimney, complete with a couple of roosters. Apparently the interior is just as detailed as the exterior. 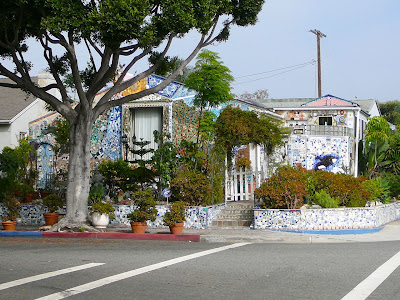 Another view from the street. If you do stop by to see it, please be respectful of the neighborhood, remembering that this home - and the houses around it - are private residences. 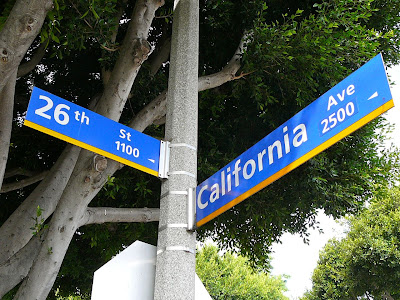 Location: 26th Street and California Avenue in Santa Monica. Here's a map below.

And a link to the Farnam's website: Custom Mosaic Art.

All part of experiencing Los Angeles.

David, great post, story and photographs about the Farnam house.

What a wonderful structure.

I just visited this house today! Thanks for posting about it-l wouldn't have known about it otherwise!

I'm an editor at atlasobscura.com and I was wondering if you would mind if we used your wonderful photos for our entry on the Mosaic House! You would of course receive copyright credit, and we would link the photos back here to your blog, or another website if you so wish. Please let me know!