Experiencing L.A. at the Watts Towers 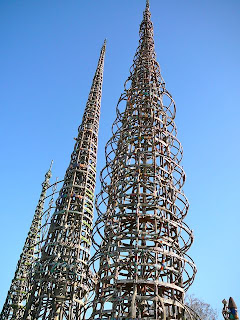 Located off the 105 Frwy in South Los Angeles, the Watts Towers were the creation of Simon Rodia, an Italian immigrant who built them as a work of art and labor of love over 33 years from 1921 to 1954. 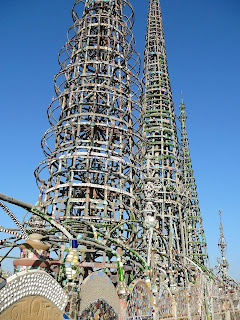 There are numerous structures, with the two tallest towers almost 100 feet tall. A friend from Orange County who had just seen them couldn't believe "Mr Los Angeles" (that would be me) had very visited.

About four years ago, when we were living in Los Angeles, I was driving down the 105 Century Freeway and decided to finally see what these of so famous structures were all about. 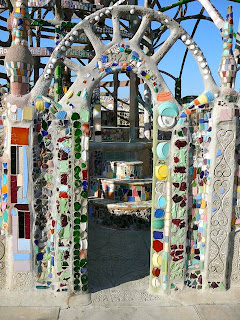 Wow, a-mazing. I've blogged on this before - although this updated post has a lot more photos. 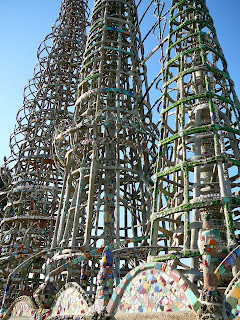 According to a Wikipedia article, "Rodia called the towers Nuestro Pueblo, meaning "our town. 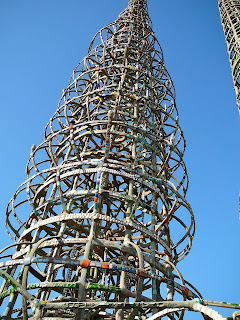 "Rodia built them with no special equipment or (so far as is known) predetermined design, working alone with hand tools and window-washer's equipment. 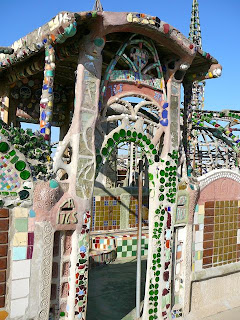 "Neighborhood children brought pieces of broken glass and pottery to Rodia in hopes they would be added to the project. 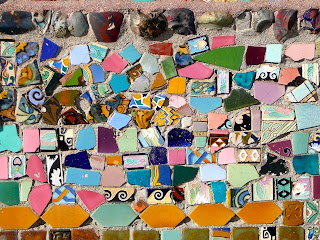 "But the majority of Rodia's material consisted of damaged pieces from the Malibu Pottery, where he worked for many years. 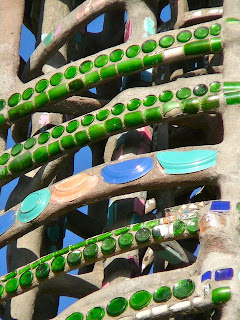 "Green glass includes recognizable soft drink bottles, some still bearing the logos of 7 Up, Squirt, Bubble Up, and Canada Dry. 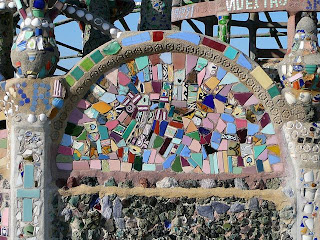 "Blue glass appears to be from milk of magnesia bottles. Rodia bent up much of the Towers' framework from scrap rebar, using nearby railroad tracks as a sort of makeshift vise." 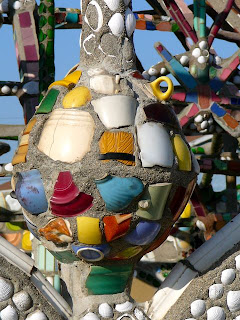 As an aside, I have friends in Los Angeles who attend and are part of Mosaic Church www.mosaic.org. I love that name. Mosaic. It reminds me so much of what I saw here. 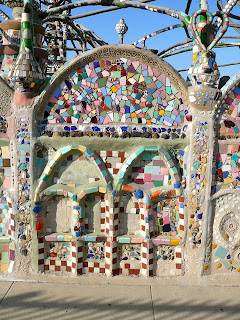 According the the church's web site, the name mosaic "comes from the diversity of our members and from the symbolism of a broken and fragmented humanity which can become a work of beauty under the artful hands of God." 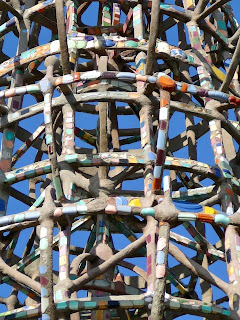 Again from Wikipedia: "Rodia reportedly did not get along with his neighbors, some of whom allowed their children to vandalize his work. 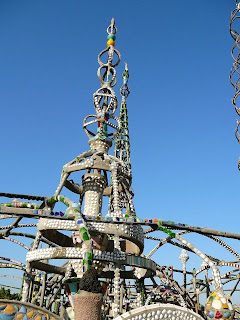 "Rumors that the towers were antennae for communicating with enemy Japanese forces, or contained buried treasure, caused suspicion and further vandalism. 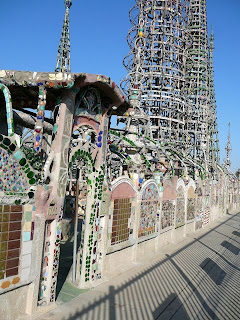 In 1955, Rodia gave the property away and left, reportedly tired of the abuse he had received. He retired to Martinez, California, and never came back. He died a decade later. 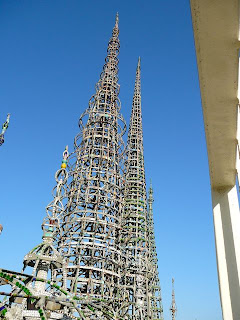 "In 1959 the city of Los Angeles decided to demolish the structures. The towers had already become famous and there was opposition from around the world. 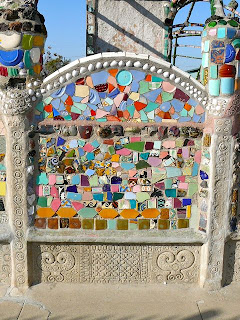 "A newly formed private Committee for the Simon Rodia's Towers in Watts negotiated with the city to allow for an engineering test to establish the safety of the structures. 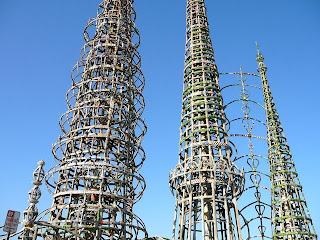 For the test, steel cable was attached to each tower and a crane was used to exert lateral force. 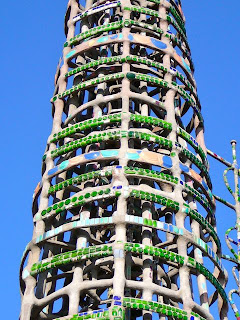 The crane was unable to topple or even shift the towers, and the test was concluded when the crane experienced mechanical failure. 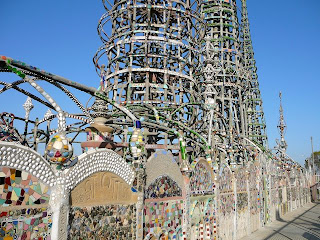 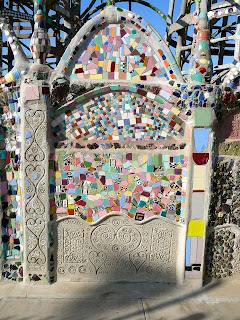 When I stopped by in March 2008, the Towers were technically closed for the day. There is a nominal admission charge to go inside and walk around, although much can be seen and enjoyed from the outside. 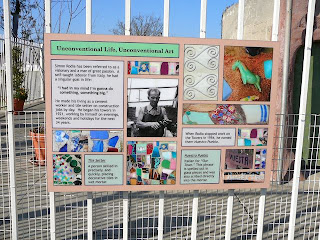 Along the outside fence, there's some interesting information about Simon Rodia, including this, describing him as having an "Unconventional Life, Unconventional Art".

Unconventional. It's a great word. 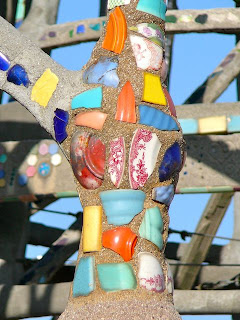 As a Christian, I'm fearful my life might be characterized as "conventional." Just going with the flow, blending in to the world around me, never questioning the status quo of contemporary society, not looking at the brokeness of my own life. 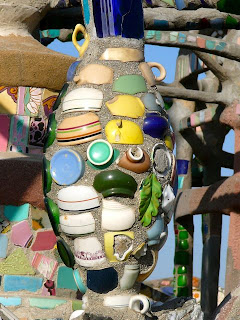 Not being weird or obnoxious (there's already too much of that). But different - unconventional. 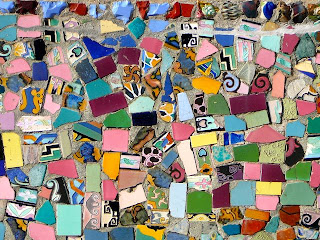 I had heard about the Watts Towers since I was a kid growing up in Los Angeles. But that was it, I just "heard" about them. 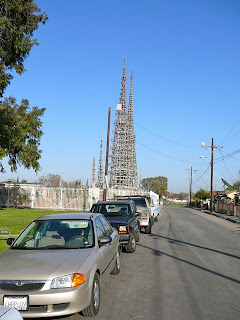 Don't be like me and wait 40 years to go see them. If you're any where in the Los Angeles area, they are a "must see." 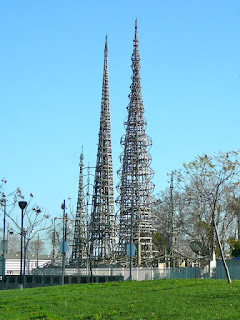 Here's a link to their website with hours, directions, and more information.