Experiencing L.A. at Sunset & the PCH 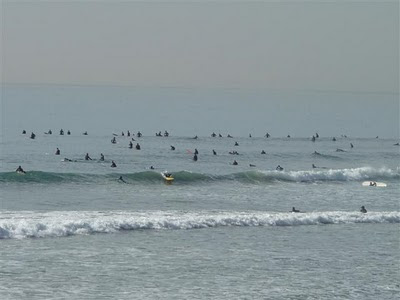 Two years ago I was driving along the Pacific Coast Highway (PCH) just south of Gladstones Restaurant at Sunset Blvd in Pacific Palisades around 10am on a Friday morning.

What caught my attention was how how incredibly crowded the surf spot was. I'd never seen it so packed. 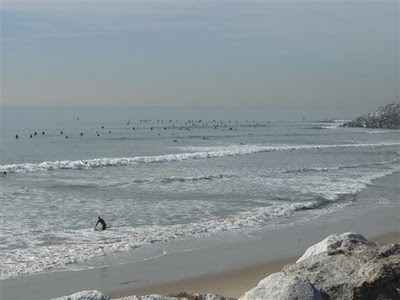 I pulled over and took a few pictures. Here's a wide angle shot - the rock outcropping to the right is where Gladstones Restaurant (corner of Sunset Blvd & PCH) is located. For people out of the area, this is all within the city limits of Los Angeles. 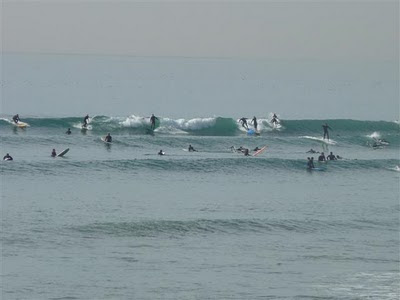 A winter storm elsewhere in the Pacific made for some ideal surf conditions here in Southern California.

Surfing is perhaps the only sport I can think of where those involved don't necessarily want others to join them (especially at "their" spot). 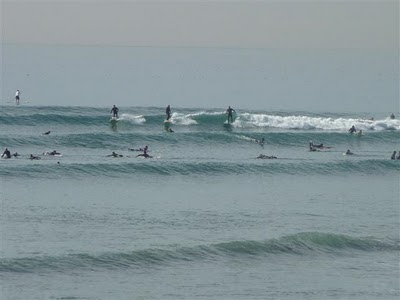 Everyone was crowded in this one spot because this is where the waves were really breaking. A couple hundred yards away, the water was literally empty. And, of course, with temperatures (water temperatures) in the 50's, everyone was wearing a full wetsuit. 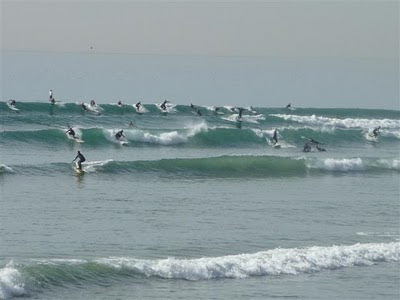 I love this shot. One photo. Twelve guys up on three (or is it four?) different waves. Wow. 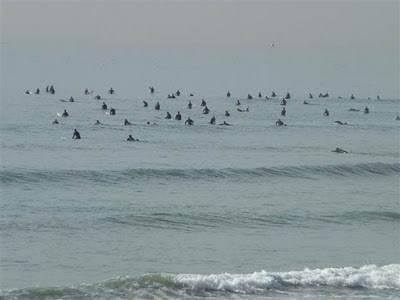 And how many guys are waiting for the next set? Over fifty. It was a Friday morning. Don't people have jobs? Oh yeah, forgot: this is L.A.
View Sunset & the PCH, Pacific Palisades in a larger map
Here's a map to this "not so secret" surf spot, located a quarter mile south of the intersection of Sunset Blvd. and the PCH (Pacific Coast Highway) in Pacific Palisades. 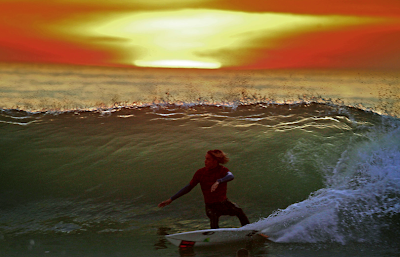 photo credit: Don Bartletti, Los Angeles Times
Meanwhile, a storm somewhere in the Pacific this week (January 2, 2012) made for some great surf. This is from Los Angeles Times photographer Don Bartletti, with a link here to a series of outstanding photographs from the most recent swells.
© 2012 www.experiencingla.com - originally posted 1/17/2010
Posted by David from L.A. at Saturday, January 07, 2012