A taste of Oxford at UCLA 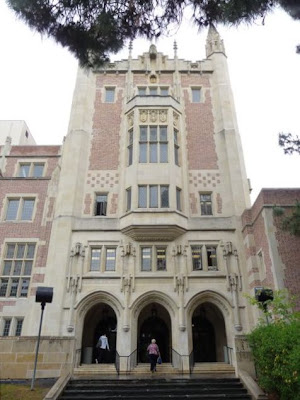 Modeled after Henry VII's chapel at Westminster, UCLA's Kerckhoff Hall is the only Tudor Gothic building on campus - and one of the most beautiful. It was built in 1931 at a cost of $815,000 and served as the original Student Union building. 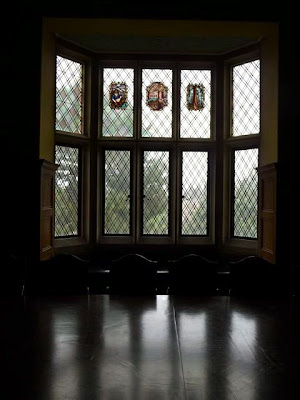 Kerckhoff continues to house the offices of the Daily Bruin, a coffee house, offices and several meeting rooms, including the one above. 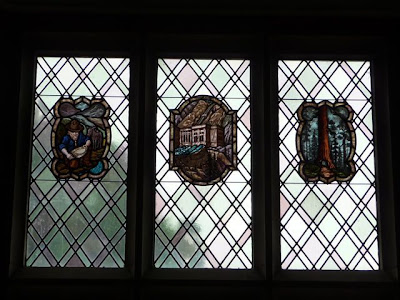 The stained-glass windows reflect both California history and the interests of benefactor William G. Kerckhoff, a successful energy and lumber magnate. 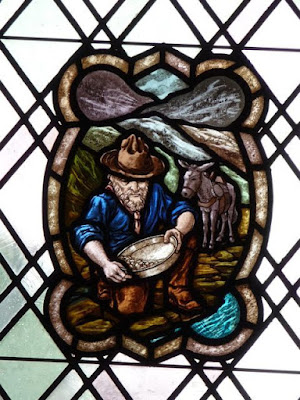 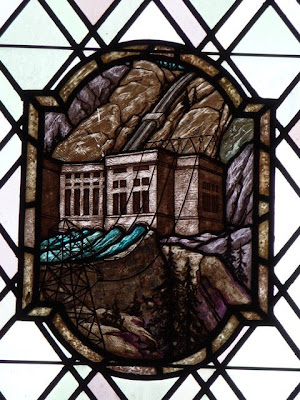 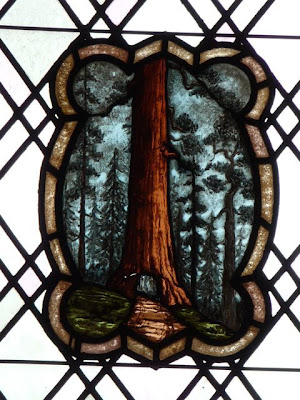 The famous Giant Sequoia - with a tunnel at the base large enough to drive a car through. A beautiful ceiling, chandeliers, and a massive conference table. As a student at UCLA, this was my favorite place on campus for a meeting. 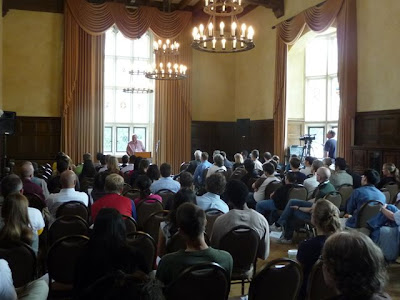 This past week, I was in another meeting room in Kerckhoff, this time to hear Oxford University mathematician and scholar John Lennox at a lunch for faculty and graduate students. 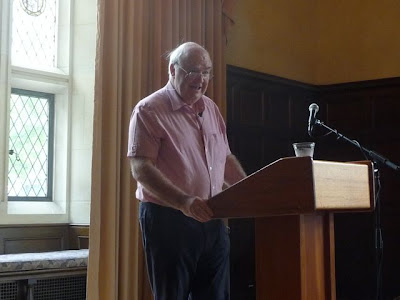 Dr. Lennox spoke on his new book "God and Stephen Hawking," making an excellent argument for theism in general and Christianity in particular. 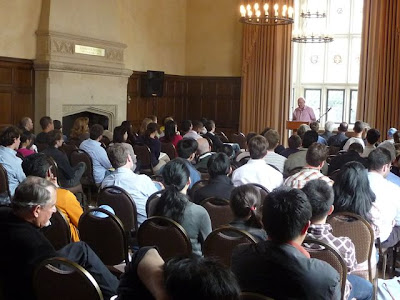 The event was sponsored by the "Veritas Forum," a Christian organization founded at Harvard University in 1992. According to their website, their mission is "to engage students and faculty in discussions about life's hardest questions and the relevance of Jesus Christ to all of life." The lecture, attended by over 80 faculty and graduate students, was excellent. Afterwards, Dr. Lennox stuck around for some Q & A. 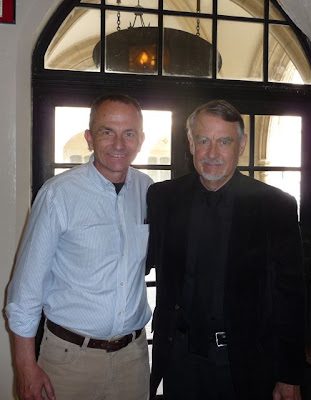 At the lunch, I also had a chance to see a former history professor, Dr. Scott Barchy. Dr. Barchy teaches several classes on the historical background of the New Testament, and I had the privilege of attending the first class he taught at UCLA back in the Fall of 1981.


Over the last thirty years, Dr. Barchy has encouraged hundreds of both Christian and non-Christian students to examine the historical context of the early Christian movement. He's both an outstanding scholar and an engaging lecturer. 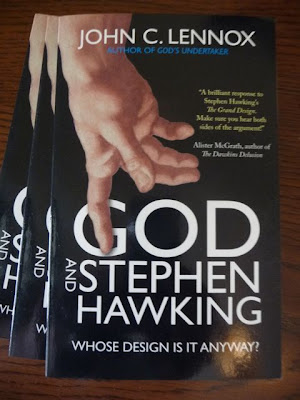 Picked up a copy of Dr. Lennox's book. Looking forward to reading it later this Spring. 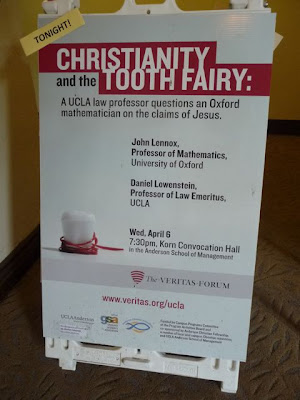 Outside in the hallway was a promotion for a similar, and yet much larger, program later that evening. UCLA Law Professor Daniel Lowenstein would be questioning Dr. Lennox on whether or not the claims of Jesus would hold up in a court of law.  Excellent, amazing time.


Over 1000 students and faculty attended - with 200 being turned away for lack of space despite having several overflow rooms. The lecture, followed by Q&A, is available for viewing here. 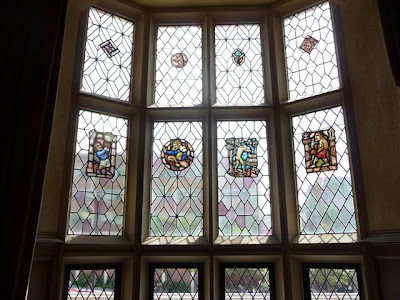 After the lunch, just before heading out, I noticed the stained glass in the Grand Salon where we were meeting. 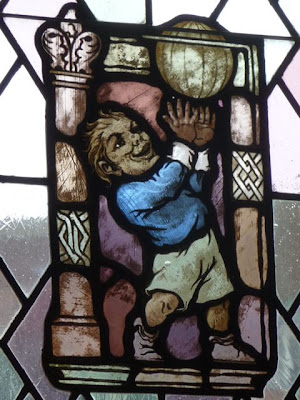 Volleyball? Basketball? Your guess is as good as mine. And whose playing? A troll? Yikes! 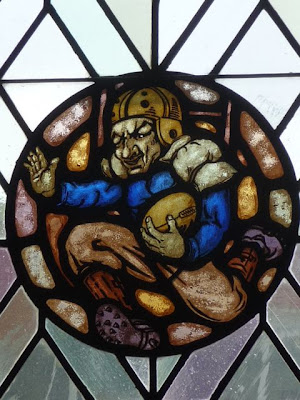 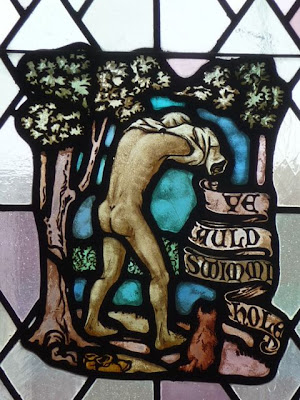 Ye Auld Swimming Hole. Interesting. Wonder what the reaction was, if any, when Kerckhoff opened in 1931? 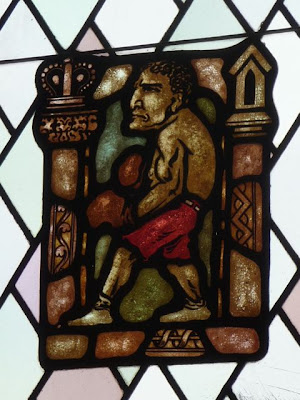 Boxing. Apparently, the three most popular sports (at least professionally) in the 1930's were baseball, horse racing and boxing.
Many thanks to the Veritas organizers, and Dr. John Lennox in particular, for putting together these events, including the lunch.
Can't think of a better speaker for a UCLA audience than a professor from Oxford University.
And can't think of a better venue on campus than Kerckhoff Hall.
Here's a link to some additional information on Kerckhoff Hall, as well as a Daily Bruin article on John Lennox and his time at UCLA.
© 2011 www.ExperiencingLA.com

Z--leave it to you to dig up (inadvertantly) my past. I took Barchy's New Testiment History/Early Christian Church class (or whatever exactly it was called) back in the never-never time. Still have the books, including FF Bruce's "New Testiment History" the main text for the course. Probably got a B out of his generousity for the poor (academic student). Gene

Great pics of Kerhkoff Hall - It is a really beautiful building, but I almost never take the time to go in and look around and notice the unique and interesting stained glass!

Thanks for posting the Veritas Forum link, too. I had wanted to attend, but was out of town last week.

I appreciate reading your blog! Thanks for sharing your thoughts about experiecing LA. Though, I'm a native around here, you often open my eyes to all kinds of things I just haven't taken the time to notice!
jui

Didn't that room used to have dirty leather couches? I took a few naps there between classes! One big regret I have is that I did not take Barchy's class. I think there was always some kind of schedule conflict. Is he still teaching at UCLA? Thanks for your blog.