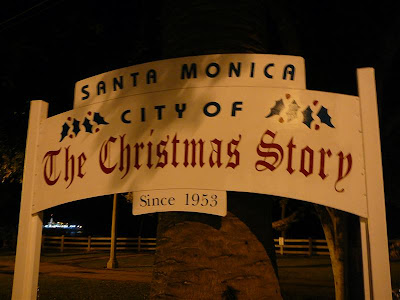 For almost sixty years, a dozen churches have sponsored an annual Christmas display along the bluffs in Santa Monica. 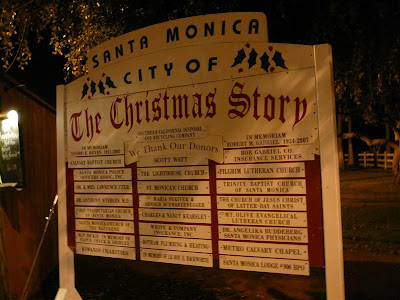 Fourteen life size displays dramatize the nativity story as found in the gospels, specifically the first two chapters of Matthew, and the first two chapters of Luke.
The displays have been a part of the Santa Monica landscape since 1953.
I found this article, which has some interesting historical background on the displays as well as some old black and white photos.
The displays are along Ocean Avenue between Arizona Avenue and Santa Monica Blvd. Here is each scene, with the respective Scriptural references: 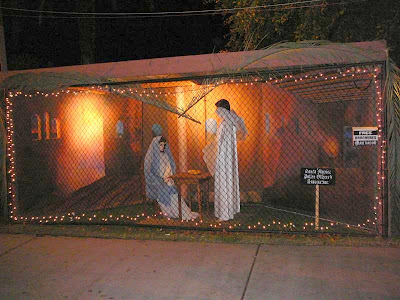 The Annunciation
"Hail thou that are highly favored." (Luke 1:28) 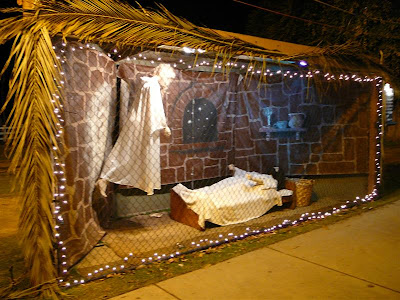 Joseph's Dream
"The angel appeared unto him in a dreaming saying Joseph the son of David, fear not to take unto thee Mary thy wife." (Matthew 1:20) 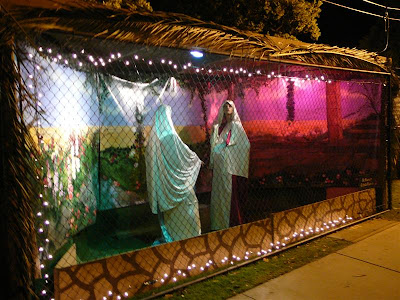 The Visitation
"Blessed are thou among women and blessed is the fruit of they womb." (Luke 1:42) 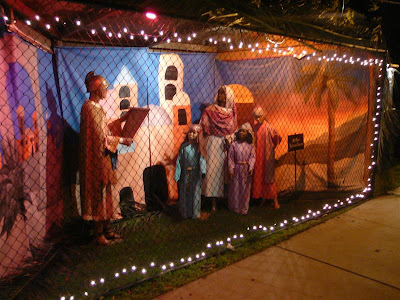 Caesar's Decree
"And Ceasar Augustus decreed that all the world should be taxed."
(Luke 2:1) 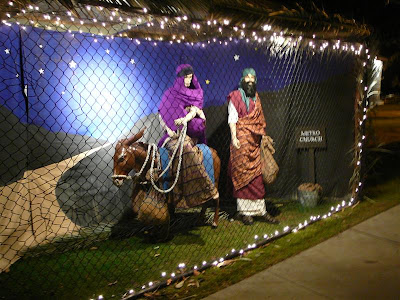 Rest on the Road
"And Joseph went also up from Galilee unto Bethlehem to be taxed with Mary, his espoused wife." (Luke 2:4-5) 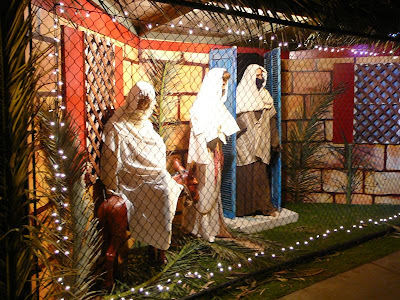 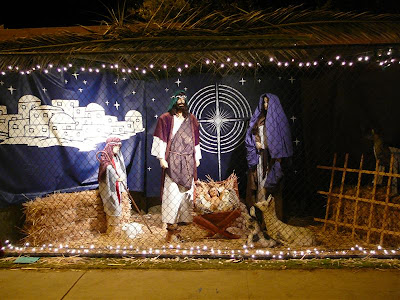 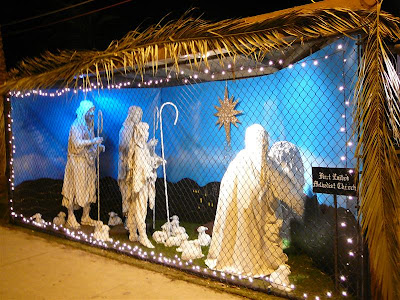 Peace on Earth
"And there were shepherds keeping watch over their flocks at night and the angel of the Lord came unto them." (Luke 2:8,9) 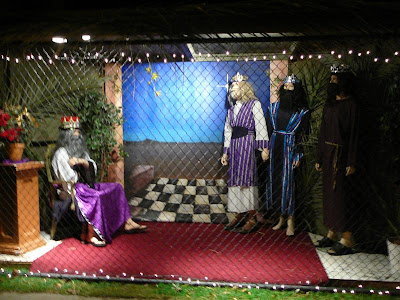 Herod's Court
"When Herod the king heard these things he was greatly troubled." (Matthew 2:3) 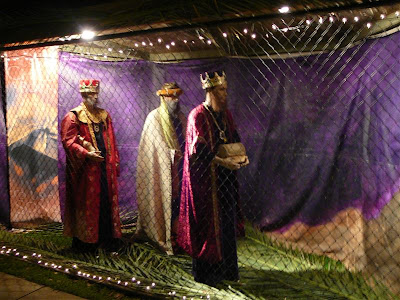 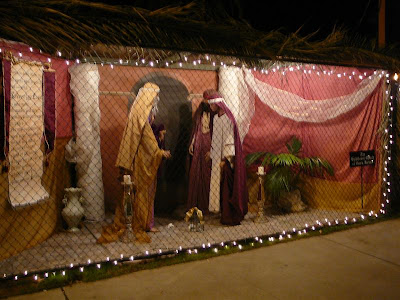 Presentation in the Temple
"They present him to the Lord." (Luke 2:22) 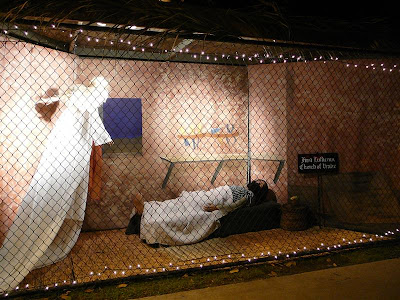 Joseph's Warning
"Behold the angel of the Lord appeared to him in a dream." Matthew 2:13 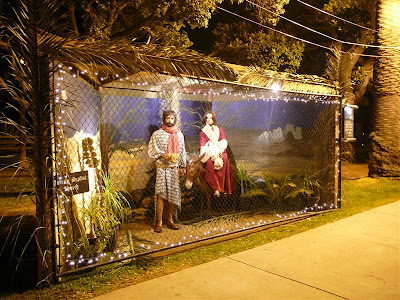 Flight to Egypt
"And he rose and took the child and his mother by night and deported into Egypt." (Matthew 2:14) Return to Nazareth
"And he came and dwelt in a city called Nazareth." (Matthew 2:23)

So many of us appreciate the time, effort, and funding to make this happen. At a time of increasingly secular displays of Christmas, an elaborate nativity display like this is a welcome relief from Frosty, Rudolf and dogs singing Jingle Bells.

The displays still draw visitors, although much fewer than in the past. It would be easy to dismiss this all on the secularization of Christmas, and that's part of it, but honestly the displays simply don't capture the imagination the same way they did 50+ years ago.

I wonder what it might take to renew interest.

Perhaps a better question to ask is "if a dozen churches in Santa Monica decided to begin hosting an elaborate public nativity display today - what would it look like?"

As stated in an earlier entry, the Church at Rocky Peak draws 18,000 people over six night for it's "Back to Bethlehem" event, and Journey of Faith church in Manhattan Beach draws huge crowds for a similar event.

Of course, having lived in the area, I know that Santa Monica is a very different community than Chatsworth or Manhattan Beach and I appreciate having anything on the westside of Los Angeles that publically speaks of Christ and the Incarnation.

I also appreciate the challenge of churches from very diverse beliefs working on this together.

Rather than simply throwing in the towel and writting off any sort of public display of faith, churches were willing to work together. This included evangelical churches like Calvary Chapel Metro, Lighthouse (Assemblies of God), and Trinity Baptist, denominational churches like the United Methodist, Pilgrim Lutheran, and the First Presbyterian Churches, St. Monica and St. Anne Roman Catholic Chuches, and (certainly what would fall outside of historic Christian theology) the Mormon Church.

Despite the fact that these churches are all over the map theologically, I appreciate seeing the birth of Christ - the Christmas story - publically displayed to Santa Monica and the greater westside community.

On behalf of my family - thank you!

Here's their website if you'd like more information. If you're anywhere near the westside of Los Angeles, it's worth seeing.

"Where is the one who has been born King of the Jews? We saw his star in the east and have come to worship him." (Matthew 2:2).