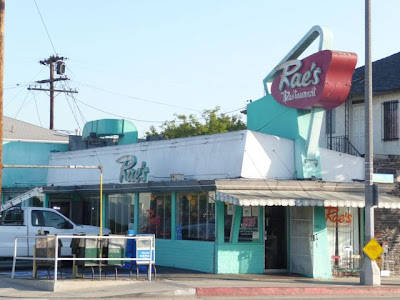 Last May I walked up Pico Blvd from the beach to Westwood Blvd. Here's the link to Part I - the first couple of miles from last week's post.

Above is Rae's at Pico & 29th. Rae's is a classic American diner. Not one of those silly themed "50's cafes" - this is the real deal. What one blogger calls a "Time Machine" www.latimemachines.com.

Both the interior and exterior of Rae's has been used in numerous movies, TV shows, and commercials including Starsky and Hutch, Bowfinger (with Steve Martin), True Romance (with Patricia Arquette and Christian Slater), The Next Best Thing (with Madonna), The Lords of Dogtown, and Not Another Teen Movie. 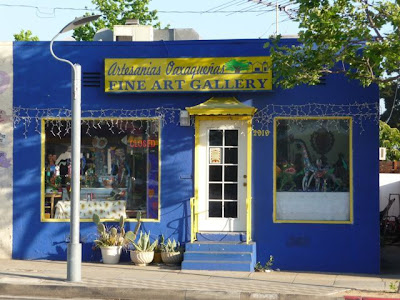 A few yards up from Rae's is Artesanias Oaxaquenas, specializing in Mexican folk art. While I'm generally trying to get rid of stuff rather than buying stuff (including artwork, Mexican or otherwise) I liked the choice of color of the sign and building - UCLA's colors. No relationship. 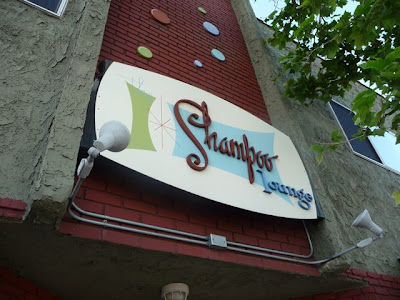 Across the street was the Shampoo Lounge. It's not a "lounge" - it's a hair salon. According to their website http://theshampoolounge.com/ (worth visiting just to listen to the really cool music) haircuts start at $50. Guess that's the going rate. I pay $12 over on Lincoln Blvd. 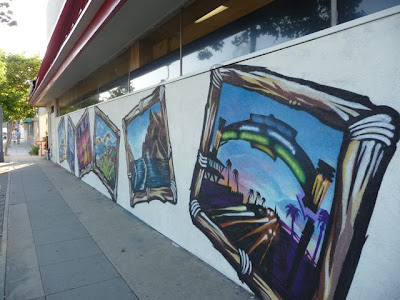 A couple of blocks up is Trader Joe's. We go here all the time. Great store but (like much of the westside) terrible parking. I've often parked on the street and walked a block to avoid their lot. Nice Santa Monica themed murals out front along the street, though. 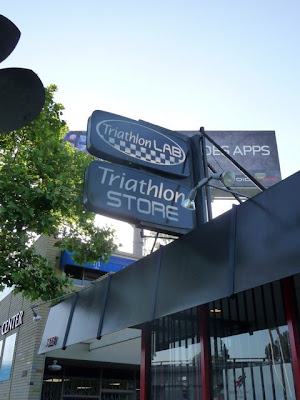 The Triathlon Lab is pretty self explanatory: everything you need for swimming, running and biking. Looks a bit pricey. If you want to save some cash, try Big Five on Wilshire. 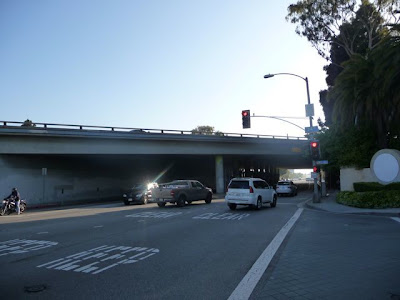 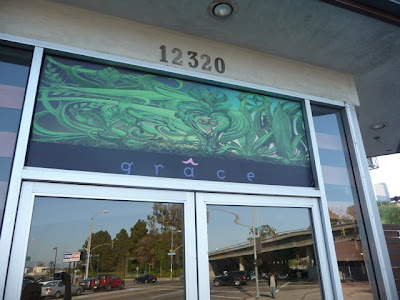 Los Angeles obviously has different zoning restrictions than Santa Monica. I liked the artwork above the door to "Grace" - and the reflection of the street is pretty cool, too. I found out later "Grace" is a medical marijuana dispensary. Uh, not what I would have guessed. 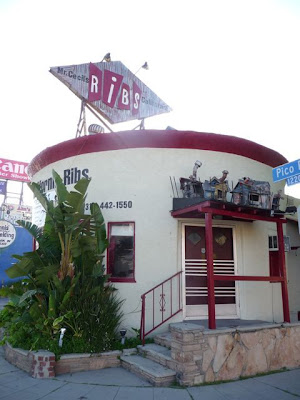 Another block east is "Mr Ceil's California Ribs". What caught my eye was the interesting architecture. Mr. Ceil looks like Colonel Sanders from KCF fame: http://www.mrcecilscaliforniaribs.com/ 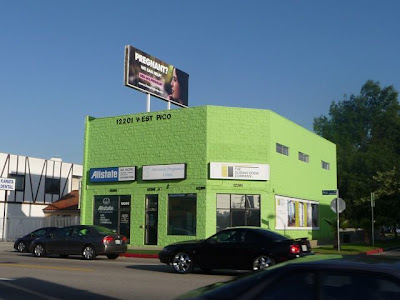 Bright (and I mean bright) green building at Pico & Amherst is home to the Westside Pregnancy Clinic. If you miss the building, there's also a billboard on the roof. I have some friends who volunteer here. Here's their website: http://www.wpclinic.org 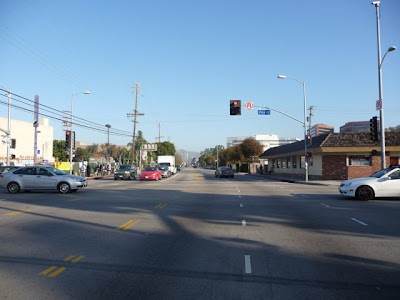 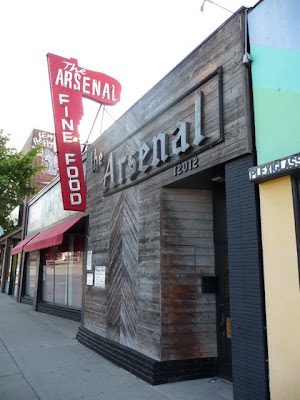 The Arsenal. Interesting name. Is it a bar? A restaurant? I guess both. Never even noticed until I was on foot. The advantage to walking . . . 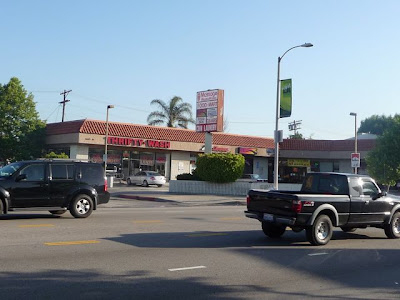 Another typical Southern California streetscape. Mini mall with obligatory palm tree. While it could be anywhere, this is at Pico & Westgate. 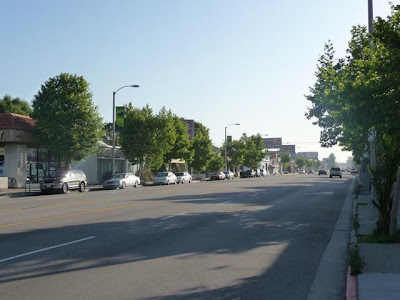 What I like, really love, about this stretch of Pico is the street trees. Really nice. These are sycamore trees, one of two trees indigenous to Los Angeles (the other being the California Live Oak). 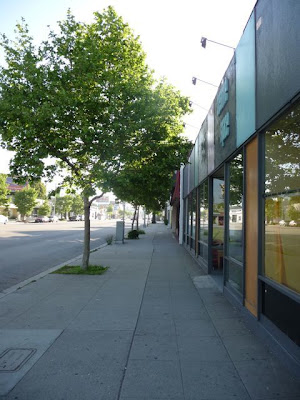 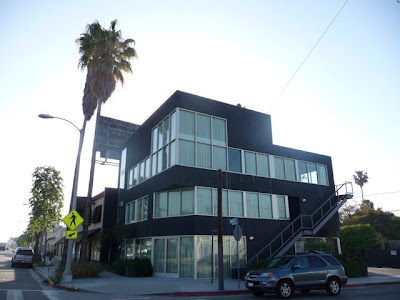 Continuing on, I liked this small office complex on the corner of Pico & Granville - West Los Angeles. The architecture reminds me of the old "Super City" building set I had as a kid. Palm trees up against it = great. 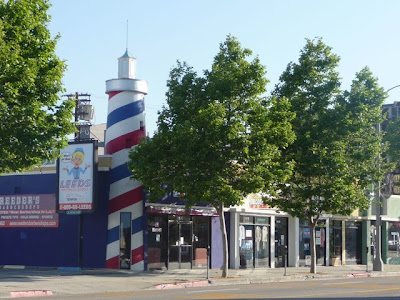 I wonder what the cost of a haircut at this barbershop is compared to "The Shampoo Lounge" down the street. I also like how they made use of the "lighthouse" architecture. 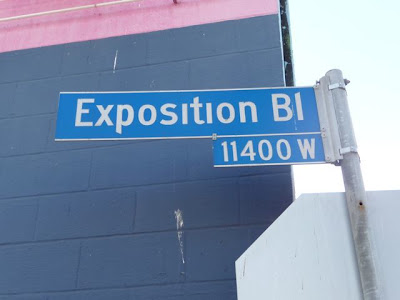 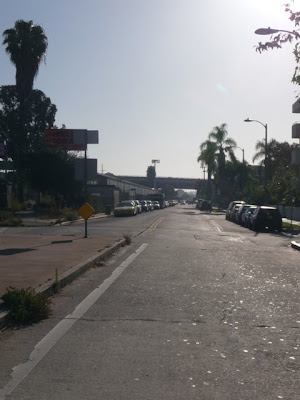 Exposition Blvd starts in Santa Monica - and continues east all the way to USC and the Los Angeles Memorial Coliseum south of downtown L.A.

Currently, a "light rail" streetcar line is under construction from downtown to Culver City along Exposition. The plan is for this line to eventually continue on to Santa Monica along either Pico or Olympic all the way to the beach.

The westside of Los Angeles can be absolute gridlock much of the day - so connecting Santa Monica with the rest of L.A. seems like a no brainer.

More on "A Walk Down Pico Blvd" - and the last mile to Westwood Blvd - in a third and final post next week.

Hello David. I just posted a comment on your article from JUNE 27, 2009, about what exacly is LA. I didn't realise you had changed the blog's location. I'm posting my comment below, even thou it's about the post from a year ago. Sorry about the mess. Cheers from Brazil.

Interesting. It's quite dificult to understant US administrative divisions for brazilians like myself. And LA really has an odd shape.

In comparison, in Brazil we don't have counties, only municipalities, states and the union. We also don't have anything like unincorporated areas. Every piece of land in Brazil (urban, rural, preservation areas and even indian reservations) is part of a municipality, and the urban area of the municipality is considered to be the city. And all of brazilians municipalities direct elect by popular vote a mayor and a city legislative chamber. Very diferent, isn't it?

thanks, Leonardo. I would agree that in terms of the City of Los Angeles - L.A. is unique (and, yes, confusing). Appreciate your comment.