Last October, Broxton Avenue in Westwood was closed for the day for yet another Hollywood Premiere at the Mann Village Theater.

The proximity to Bel Air, Beverly Hills and the rest of the L.A. "Westside," as well as the size of the theater and the ability to close down an entire city street makes the Mann Village Theater (originally, the Fox Village Theater) a top choice for Hollywood Premieres.

Here's a link to a previous post on the theater itself: http://www.experiencingla.com/2009/03/fox-theater-westwood-village.html

I'm always amazed by the amount of time and money that goes into something like this. This premiere was for the Universal film "Couples Retreat" (never heard of it).

As I commented in previous post for the premiere of "Twilight Series: New Moon" http://www.experiencingla.com/2010/06/twilight-zone-los-angeles-premiere.html, I wonder, do the folks at Universal re-use this carpet? The cynical side of me thinks it, unfortunately, just ends up in a landfill somewhere . . .


This is looking north on Broxton, with UCLA located a block away at the end of the street. My office = half a block from here. Posters for "Couples Retreat" are along the right of the red carpet runway.

Los Angeles can often feel like two worlds. Just a few feet away from all this . . . 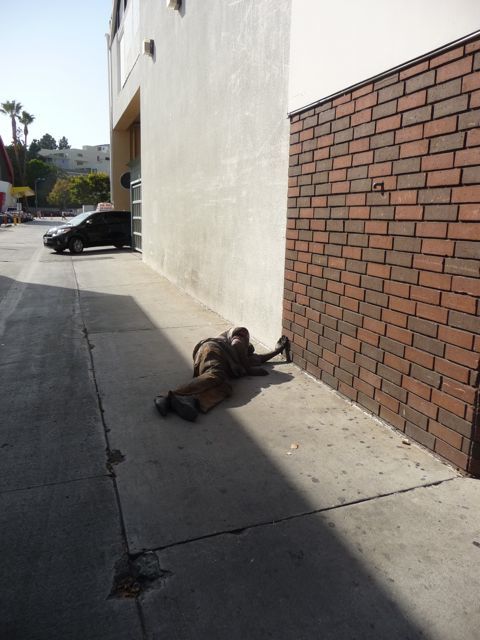 . . . one of the local transients was passed out. I'd see this same guy earlier in the day sitting on the sidewalk, pan handling. 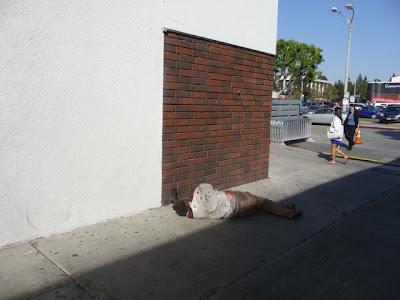 Now he was passed out in the alley way twenty feet from all the activity on Broxton (notice the crowd control barriers in the street a few feet away). My concern was that this guy literally might get run over by a car.

I called the non-emergency police number, explaining that a transient was passed out in the alley. The dispatch operator asked if I'd try and wake the guy up. Umm . . . sorry, but I wasn't going to do that. I've had a homeless guy in Santa Monica - on two different occasions - threaten to kill me. Wasn't funny. My family and I were eating in a fast food restaurant and some homeless guy walked in and threatened to kill me "unless I stop bothering him." Kinda freaked me and everyone else in the restaurant out. Really freaked out my kids. Then it happened again a few months later. Same guy - different fast food restaurant.

Sorry, I told the dispatch operator, I wasn't about to try and wake this guy in the alley. 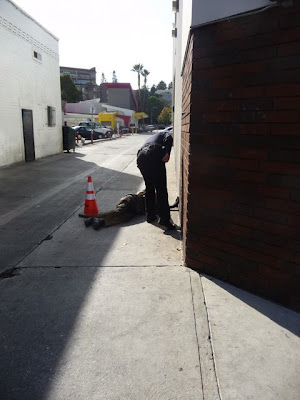 I went back and place a orange cone next to him - just so that anyone driving in the alley would at least see him.

The local police officer showed up a few minutes later and immediately knew who our friend in the alley was, calling him by his first name. 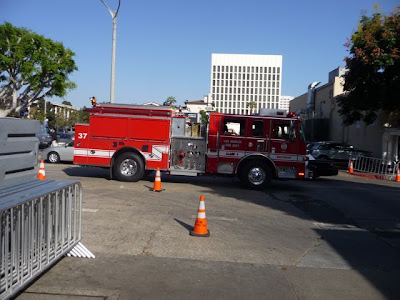 A minute or two later the a fire truck showed up. 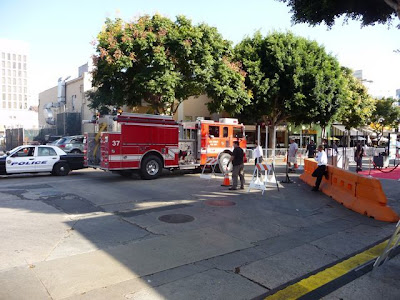 You can see the red carpet of the premiere to the right of the photo above. A single police officer probably would have been fine. The fire truck was more than necessary. 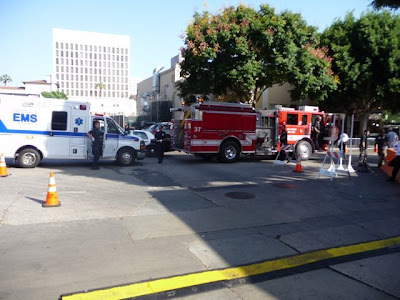 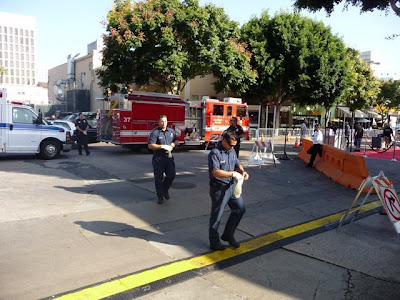 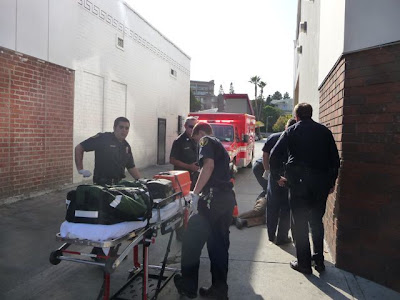 While I'm glad I called, I kept thing: what's this costing?

Maybe a better question is, what emergencies are these guys not able to respond to elsewhere in the city because they're here? 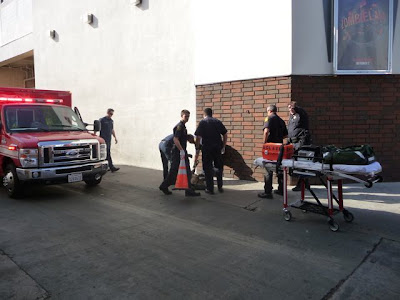 A minute or two later the they wake our friend up. He's been drinking (a lot) and just passed out. Unfortunately, there's no law against public intoxication. Or, if there is, it's not being enforced. 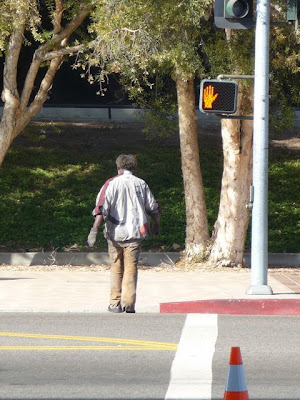 He got up, walked across the street, and passed out on the edge of the UCLA campus.

A couple weeks ago the Los Angeles Times ran a four part series http://www.latimes.com/news/local/la-me-homeless-project50,0,4610742.htmlstory on Project 50 - a plan to get, or try to get, the fifty most ask-risk homeless people off the streets of downtown's Skid Row. The article reminded me a lot of my (very brief) experience last Fall.

While Westwood Village is worlds away from Skid Row and our friend in the alley is no where near the fifty most at-risk people on L.A.'s streets, our city's public policy related towards the homeless really seems, well, broken.

In the case of our friend, the core issue isn't homelessness, it's substance abuse.

And that, unfortunately, is a much more challenging problem than just four walls and a bed.

I'm curious what cities in the U.S. have developed the most effective program for ending homelessness. Not sweeping it under the rug, not dumping alcoholics, druggies, or the mentally ill off in other places, but actually seeing peoples' lives changed.

And in those cities, I'm really curious what role faith-based programs play.