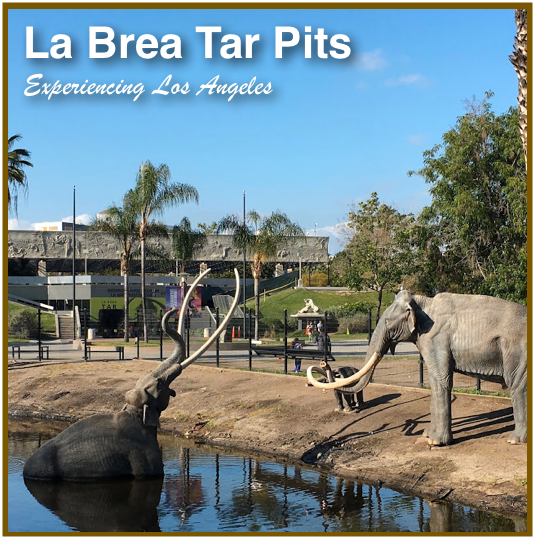 This past Spring, my wife, teenage kids, and I were in Los Angeles for a three day get-away. It was a chance to enjoy memories from when we lived in L.A. - and experience a few new things. Here are link to Part I (Los Angeles County Museum of Natural History), Part II ("Becoming Los Angeles" exhibit there) and Part III (The Wilshire Grand, downtown Los Angeles). 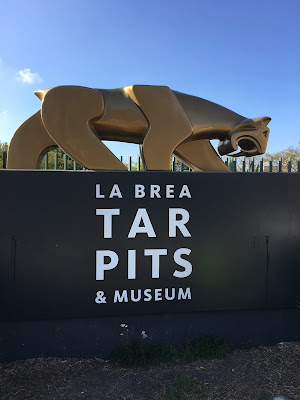 While my teenage kids took naps (it was a vacation after all), I walked from where we were startng a mile down Wilshire Blvd to the La Brea Tar Pits. The La Brea Tar Pits has the distinction of being the largest collection of Ice Age Mammal Fossils in the world. And - incredibly - it's located in the heart of Los Angeles. 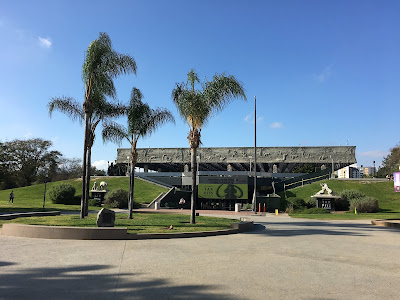 As the museum at the La Brea Tar Pits is part of the Los Angeles County Museum of Natural, it was a also a "free day" there as well. Both museums offer a free day the first Tuesday every month (except in July and August). 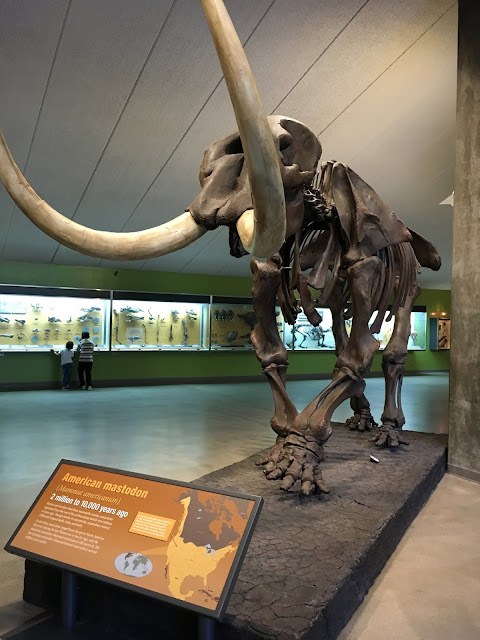 Inside, a massive "American Mastodon" skeleton. 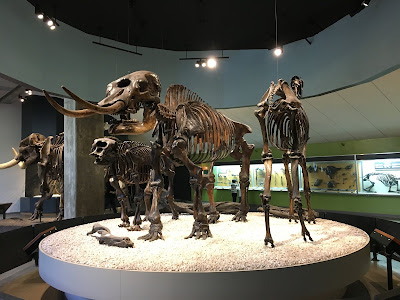 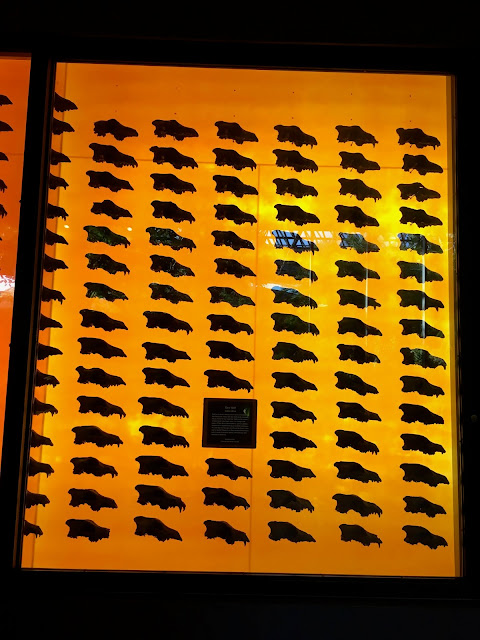 A collection of Dire Wolf skulls. 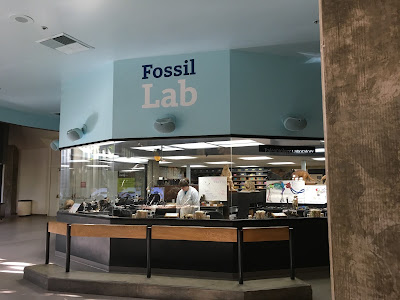 A highlight is the museums Fossil Lab. 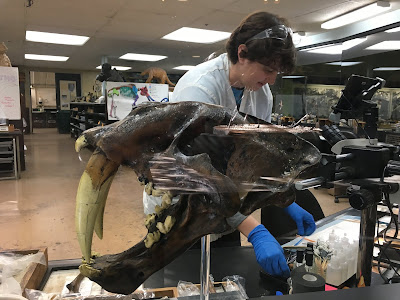 An on duty researcher working on the skull of a sabertooth cat. 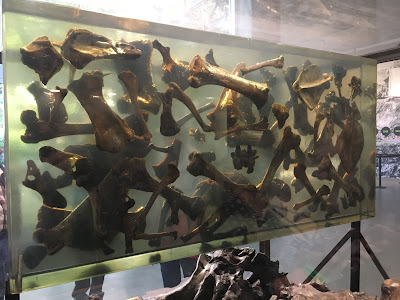 This gives an idea of densely packed each of the tar pits are will bones. The tar serves to protect these bones from normal decay. 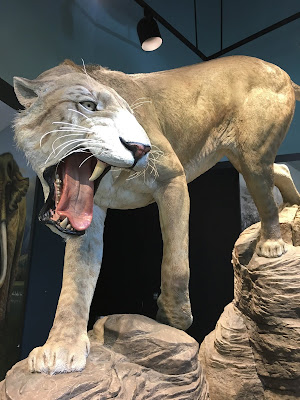 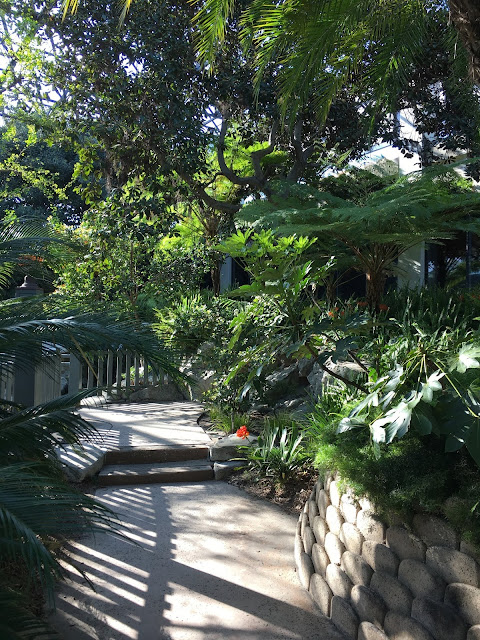 The outdoor atrium of the museum.

Apparently, museum officials have just announced plans to a complete makeover of the museum and area surrounding it. Here's a link with more information on three possible plans. I actually added this a couple of days after the initial post. At any rate, I don't have a strong opinion either way ... 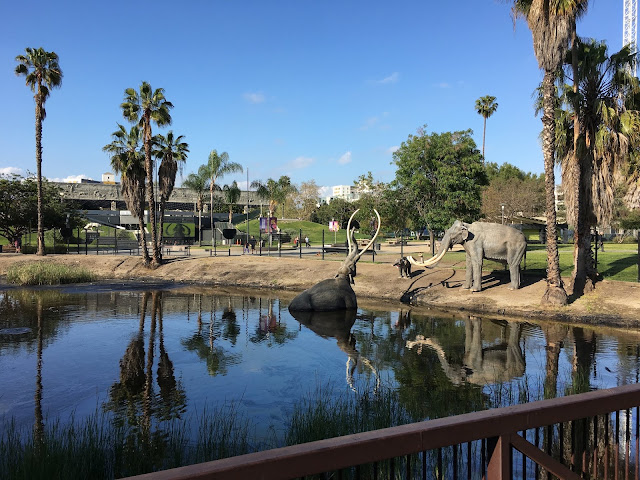 ... except that to keep some version of the iconic 1966 fiberglass mammoths at the edge - and in - the main Tar Pit visible from Wilshire Blvd. I mean, what would Los Angeles be without them? 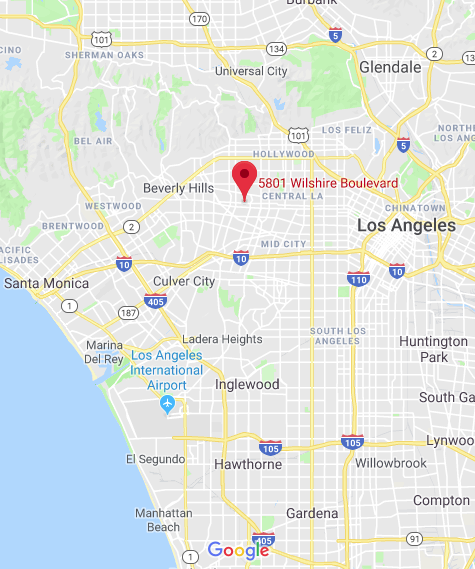 The La Brea Tar Pits are located at 5801 Wilshire Blvd in the Miracle Mile district of Los Angeles. 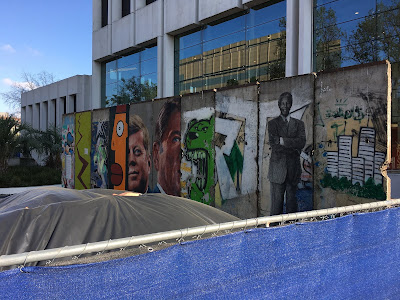 Across the street was the "Wall on Wilshire" - the largest section of the Berlin Wall outside of Germany. Some construction was going on around them, hard to get a good photo. Here's a link from a previous visit. 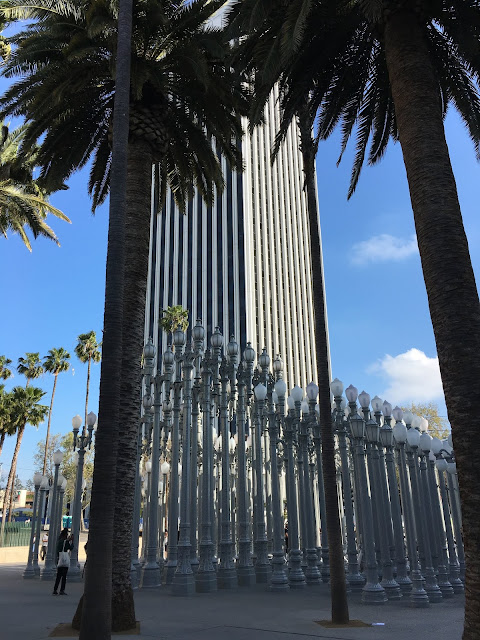 Back on the north side of Wilshire was Chris Burden's Urban Light. LOVE this beautiful collection of historic street lights. Here's a link to a previous post from 2009, which apparently is the more popular posts on this blog. 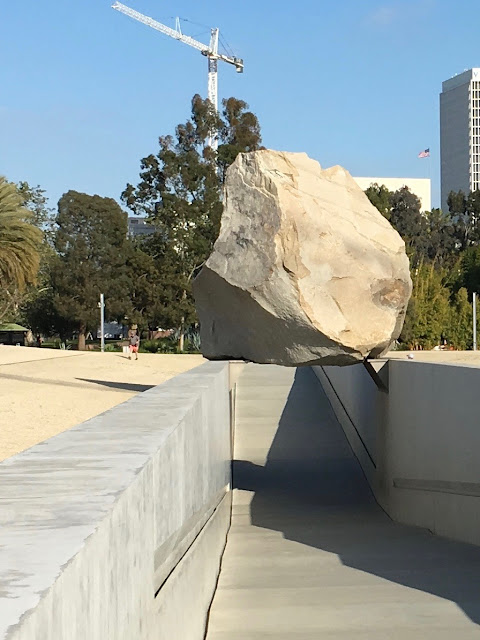 Walking back, I stopped by Michael Heizer's Levitated Mass. My initial impression wasn't great. For whatever reason, this 340 ton boulder has grown on me over the years. The best view is looking east in the afternoon, when the light helps hide the metal support structure. At least on the left side, the 340 ton boulder does seem to levitate - at least, a bit. 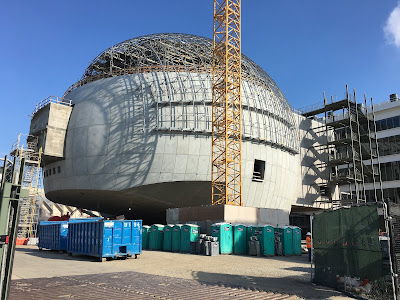 Construction of the massive Academy Awards Museum scheduled to open sometime in 2020. The museum will occupy the historic art deco Wilshire and Fairfax 1939 May Company Department Store. Under construction is a massive dome, with views looking out toward Hollywood. 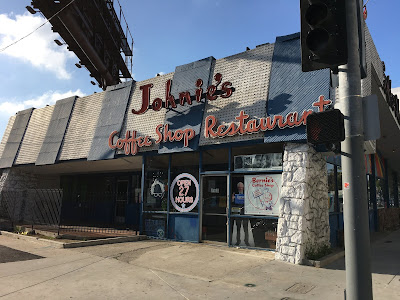 Immediately across the street, on the northwest corner of Wilshire and Fairfax is Johnie's Coffee Shop Restaurant. This being Los Angeles, this iconic "Googie" style coffee shop is used for TV and movie shoots (rather than operating as an actual coffee shop). 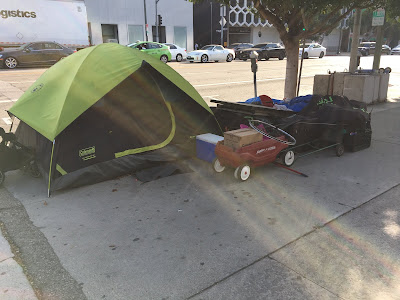 Walking back, it was sobering to see several tents along Wilshire, just a couple of blocks from Beverly Hills. It was reminder that the homeless situation in Los Angeles is very real. Mental illness, drugs, alcohol, the inability hold down a a job, the list goes on for the reasons. Here's a link to a previous post on some additional thoughts.

Solutions are much harder to come by. Solutions that are compassionate, that exercise "tough love," are economically viable, and that incentivize getting off (and staying off) the streets. The Union Rescue Mission in downtown Los Angeles, and The Dream Center in Echo Park are a couple of examples of non-profits that are working hard to not simply house men, women, and families - but to work with the much harder root causes ... and give people the ability to get into long term housing. 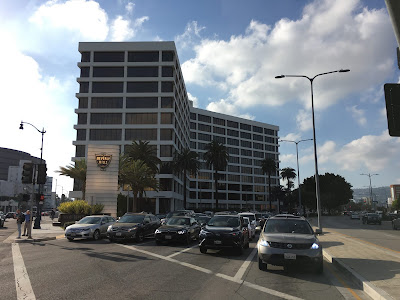 It was a bit jarring to go from tents along to Wilshire to the glitz of the the sign welcoming you into Beverly Hills.

I worked at this office building, located on the corner of Wilshire and San Vincente, for one summer while a student at UCLA. Fun walking by. 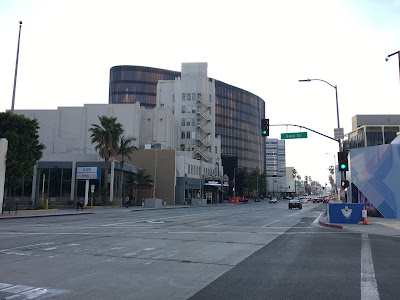 On the left across the street was the Dolly Saken School of the Arts. Our kids took a class, and were involved with one of the productions (along with other home school families) when we lived in Los Angeles. 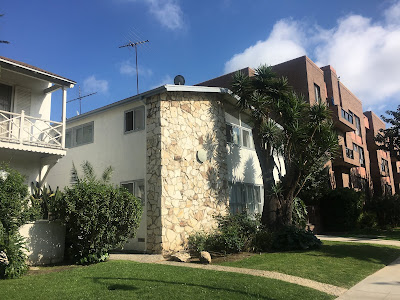 As mentioned, we stayed at an AirBnB rather than a hotel. 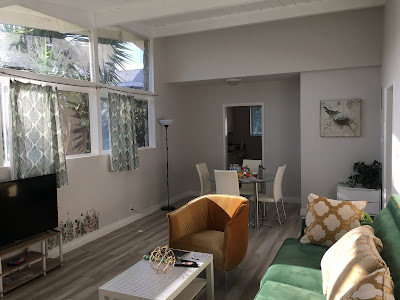 It felt like staying in a friends apartment. While it had it's qwirks, it certainly had more space, at about the same price, as a single hotel room. Worked for us. 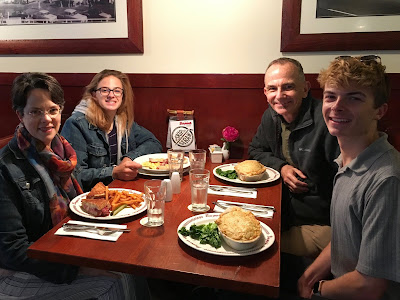 Dinner at DuPar's at Original Farmer's Market, at 6th and Fairfax, about a mile away. 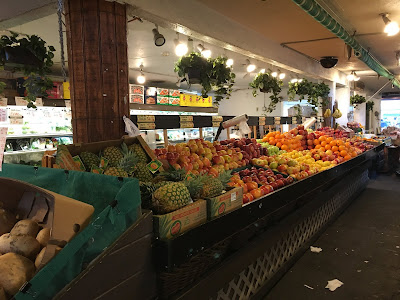 Orignal Farmer's Market is a series of open air stalls and small shops. It's been around since 1934. 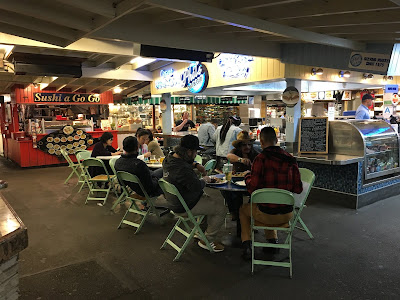 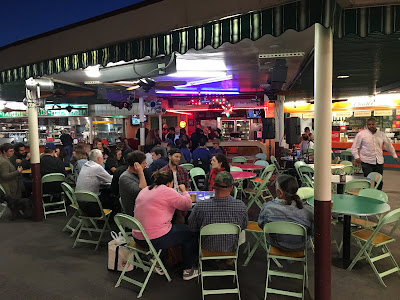 I had hope to eat outside, but my kids voted for indoors (DuPars) which was fine.

Next time: an early morning hike to the top of the Hollywood Sign.
© 2019 www.experiencingla.com