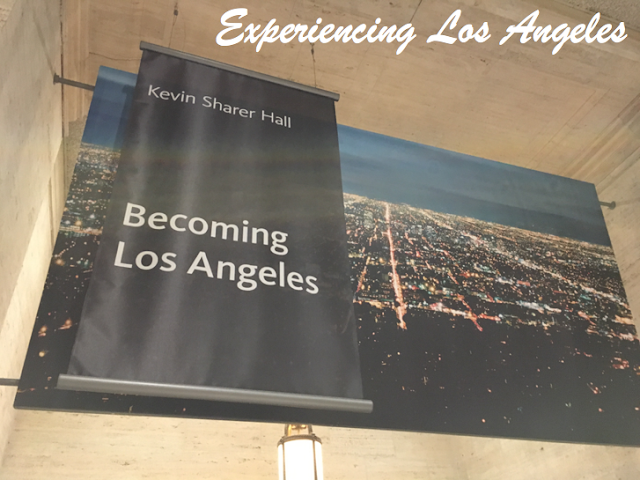 This past Spring, my wife, teenage kids, and I were in Los Angeles for a three day get-away. It was a chance to enjoy memories from when we lived in L.A. - and experience a few new things.

Here's a link to Part I, where we revisited some old favorites at the Los Angeles County Museum of Natural History.

In 2013, the museum opened their "Becoming Los Angeles" exhibit. I was excited to finally see it. 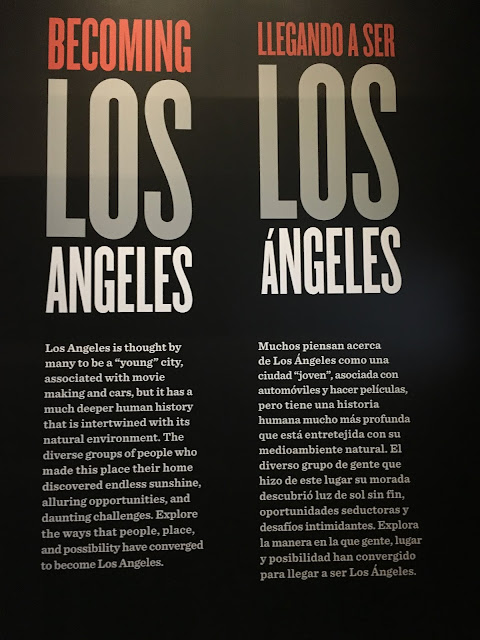 Information in English and Spanish. I'm not a Spanish major, but accent mark over the capital "A" in Los Angeles" - shrinking the size of the letter - looks a bit off. 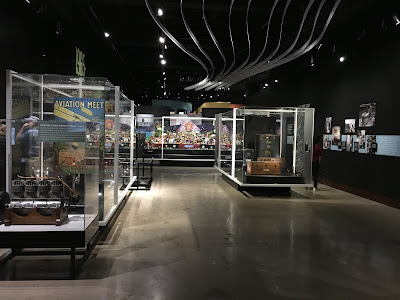 Display cases with various exhibits on "Becoming Los Angeles" -- but I'm ahead of myself. The first exhibits focused on the original native Californians, followed by the Spanish explorers. 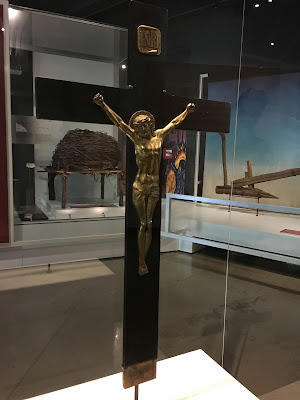 On September 24, 1781, a group of 44 of settlers from Sonora, Mexico - called "los pobladores" - founded a small settlement along the Los Angeles River.

The caption read: "In 1774, Spanish soldier Cornelio Avila carried this crucifix overland from present-day Arizona to the Los Angeles area. He was a member of Spain's first land expedition to California. Spain extended its empire from Northern Mexico into California through sea and land expeditions, mission-building, and colonization. Cornelio Avila eventually made Los Angeles his home and more settlers followed, traveling along the same path." 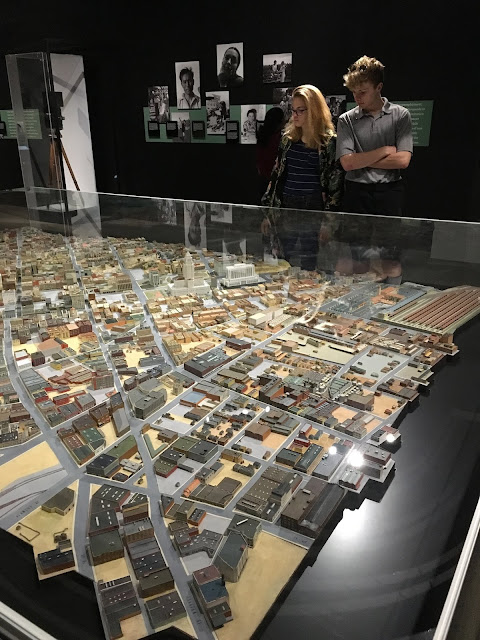 Jumping ahead a bit, my kids looking at a large model of Los Angeles as it appeared in the 1930's. I remember this model when it was located in the lower level of the museum. 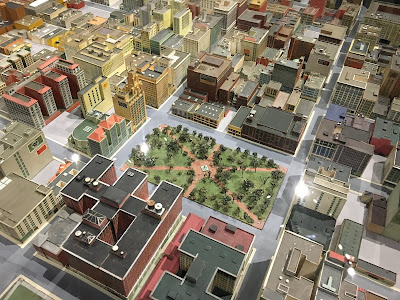 Pershing Square - in the heart of downtown Los Angeles. The was forever altered - and the trees removed - when a large parking lot was placed under the park in 1951. 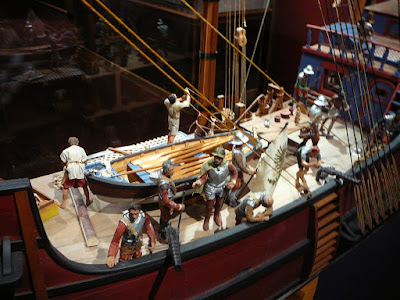 The museum's California History display, formerly housed downstairs, use to have a series of dioramas highlighting different milestones in the state's history. Above, a diorama of Juan Cabrillo, the first European to explore the California coast. 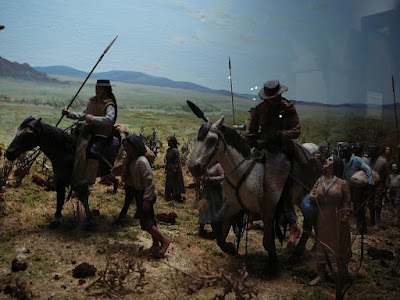 The overland expedition of "los pobladores" - traveling from Sonora, Mexico to present day Los Angeles. These photos are from a home school field trip to the museum back in October 2007. 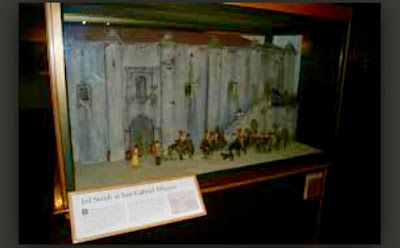 photo credit: lilesnet.com
And - found on the internet - Jedidiah Smith' overland arrival at Mission San Gabriel from the US in 1830. Sadly, these and other dioramas - which with a bit of updating could really captured the imagination of younger children - were no where to be found. 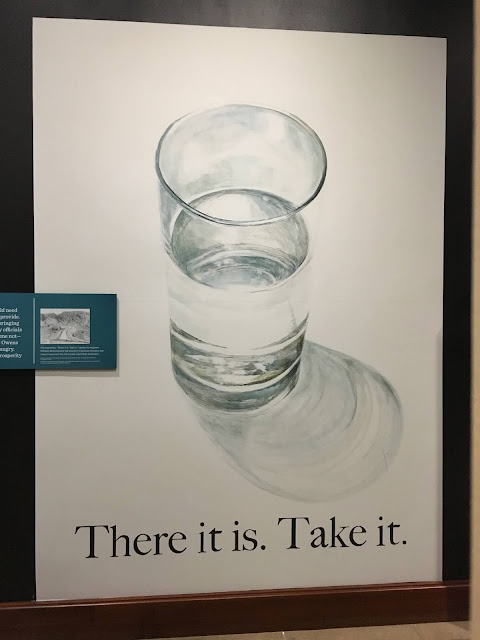 So instead of dioramas, we get a large photographs.

"There it is. Take it." - William Mulholland, at the opening of the Los Angeles aqueduct in 1913.

Imported water allowed for Los Angele's explosive growth in the 1920's. In terms of engineering, the construction of the Los Angeles aqueduct has been compared to the building of the Panama Canal. How about something more than just a photograph and a quote? 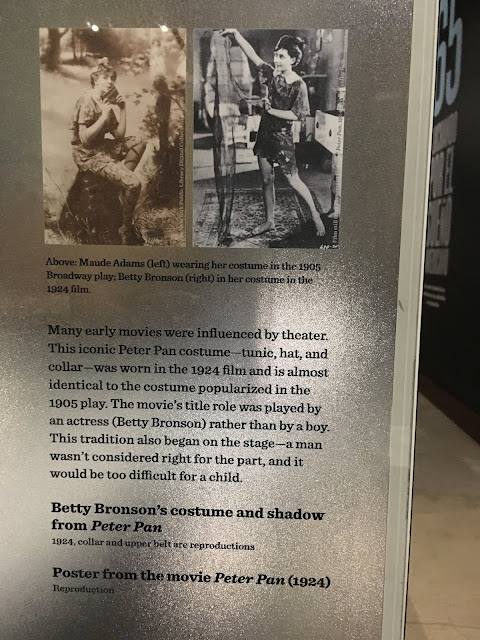 An entire museum could focus on the impact that the motion picture industry (often referred to in L.A. as "the Industry") has had on the city. In fact, there IS a museum dedicated to Hollywood - The Hollywood Museum - with a second, larger museum - The Academy Museum of Motion Pictures - set to open in 2020. Above, couple of photos from the 1924 silent version of Peter Pan. 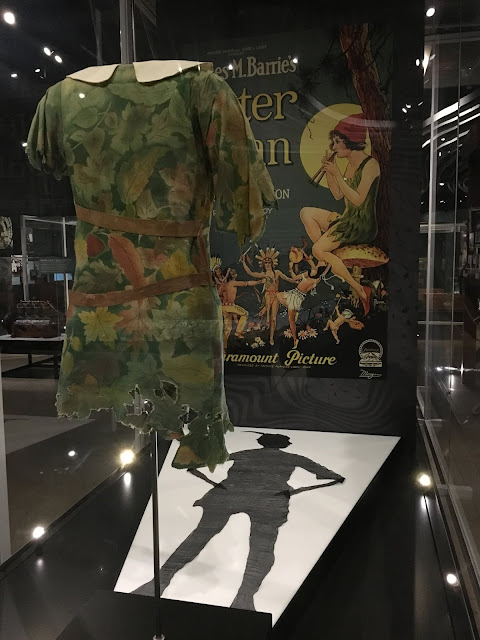 Costume from the 1924's silent version of Peter Pan. 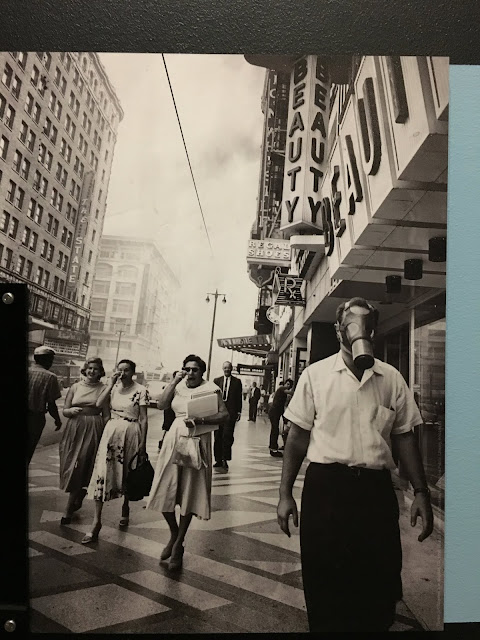 Caption reads: "In the 1900's, people traveled to Los Angeles to breathe its clean mountain air. Fifty years later, the city was known for it's pollution. On smoggy days parents kept their children inside. plants withered and died, and some people wore gas masked (shown here). Eventually, people realized that cars, which had helped the city expand, were also making it unlivable."

Rather than just a photograph, how about some interactive displays shows how bad smog was in the 1960's and 1970's ... and what it took to begin to clean up the air? 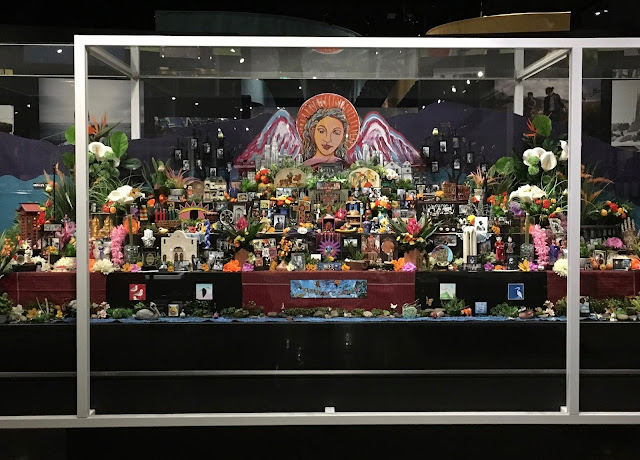 The exhibition includes the large "altar to Los Angeles." 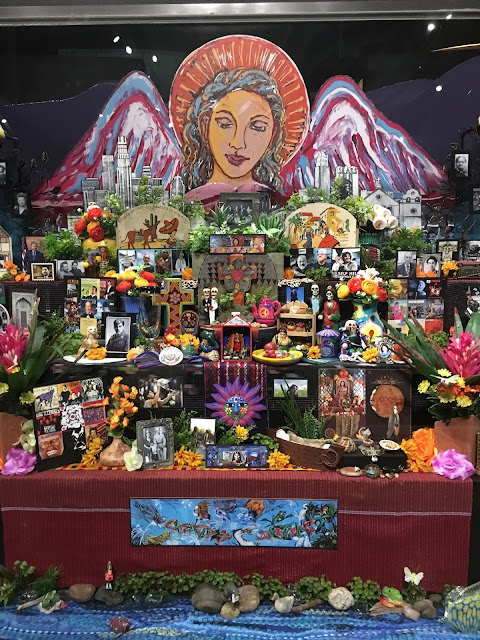 Created by artists Rosanna Esparza Ahrens and Ofelia Esparza, this has a look and feel reminiscence of Dia de los Muertos altars found in Mexico. 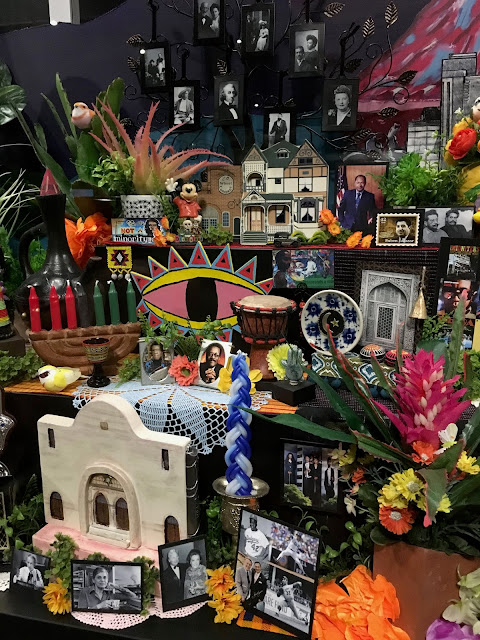 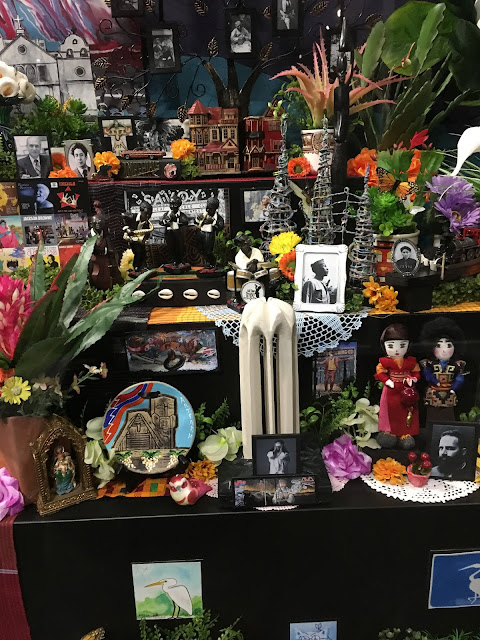 ... especially the historically under represented Latino, African-American, and Asian American communities. Here's a link to an article with additional information. 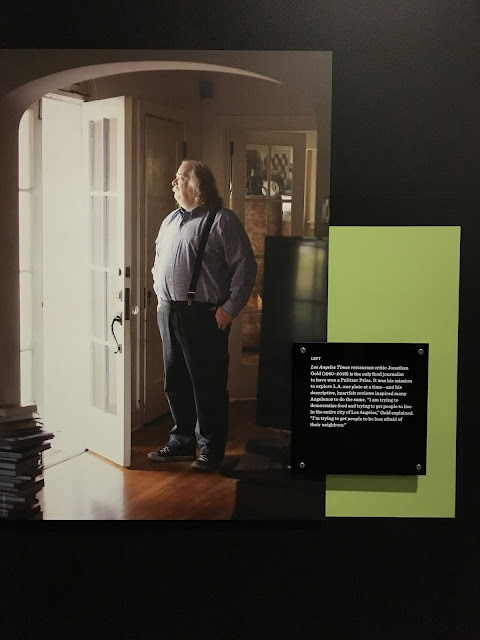 Caption reads: "Los Angeles Times restaurant critic Jonathan Gold (1960-2018) is the only food journalist to have won a Pulitzer Prize. It was his mission to explore L.A. one plate at a time - and his descriptive, heartfelt reviews inspired many Angelenos to do the same. "I am trying to democratize food and trying to get people to live in the entire city of Los Angeles," Gold explained. "I'm trying to get people to be less afraid of their neighbors."

Perhaps I missed something, but instead of just a photo and quote, how about an interactive map of the different restaurants Gold reviewed? Or the different food and dishes that were invented or popularized in Los Angeles? 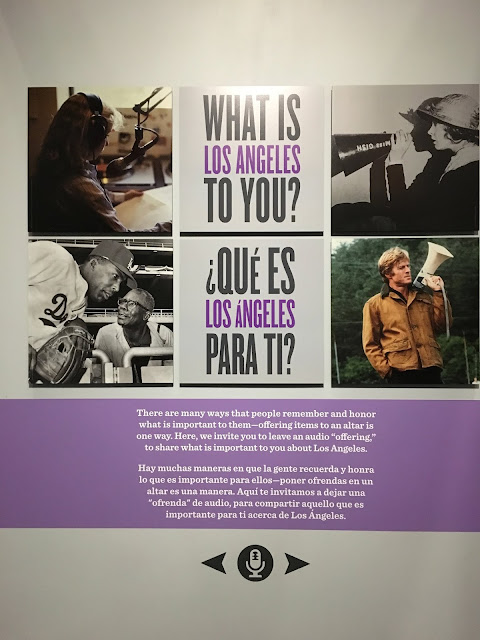 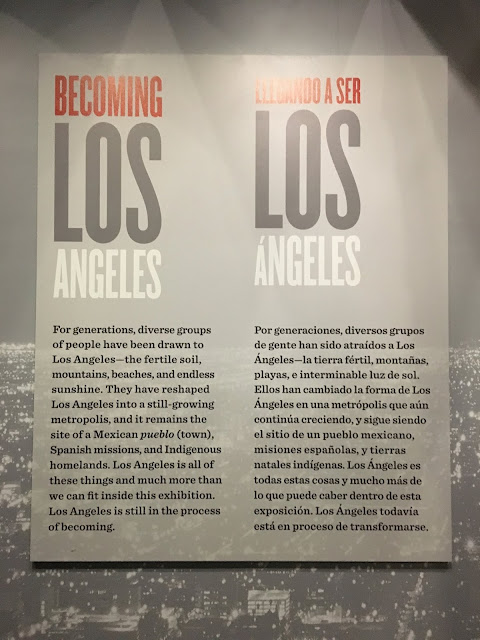 What did I think of "Becoming Los Angeles"? While there were a few highlights, overall it really fell short.

Los Angeles is among the top ten most influential cities in the world. Where was the heart and passion and, yes, love for this city?

The exhibit needed an introductory film, something similar to what can be found at the New-York Historical Society. More maps, dioramas, 3-D models, interactive displays, more about Hollywood. Los Angeles has always been a city of immigrants. It needed more on how people from around the country and the world have shaped and molded the city ... more about how Los Angeles influences the world.

As mentioned in the previous post, the Los Angeles County Museum of Natural History is the largest natural history museum in the West. Especially if you have kids, it's definitely worth a visit. Here's a link to their website.

The Natural History Museum was just the first stop on our three day family get-away. Next post: the 70th floor lobby of at the Wilshire Grand. 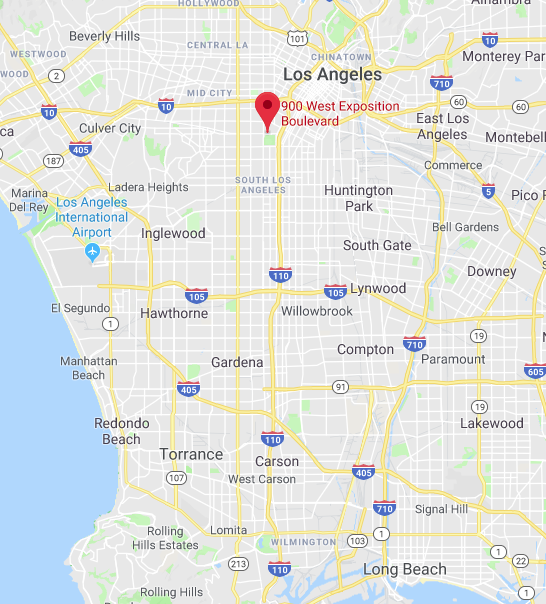