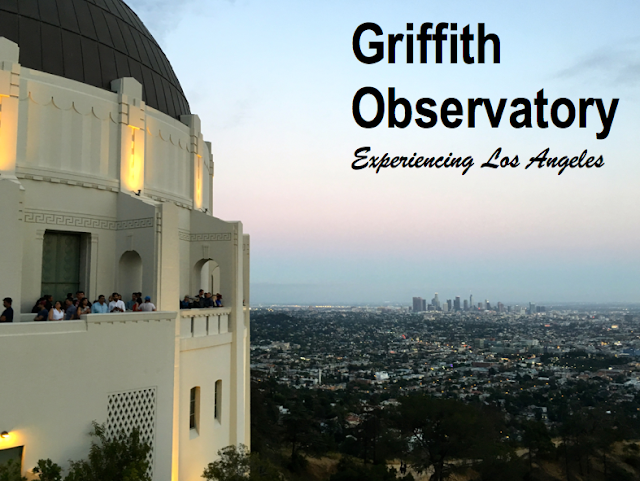 Earlier this summer, my wife, teenage kids, and I were in Southern California on a week long family vacation. We spend our first afternoon and evening in Hollywood, finishing up at the Griffith Observatory. 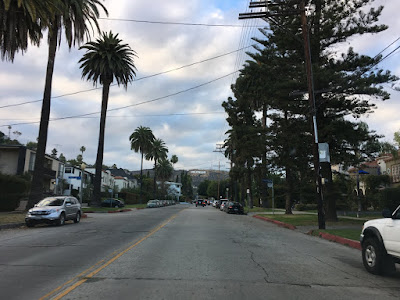 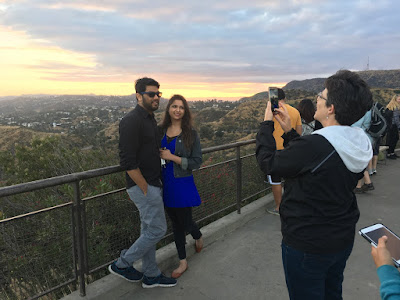 The 1936 Griffith Observatory is perched high above Hollywood, with spectacular views of the city - and the Hollywood Sign. Above, my wife taking a photo of a couple visiting from Europe ... 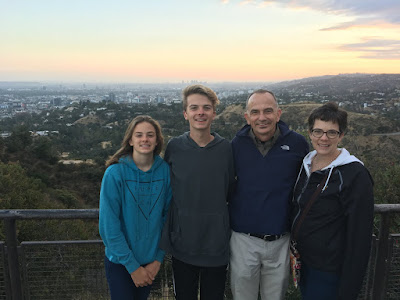 ... who were kind enough to take his photo of us. 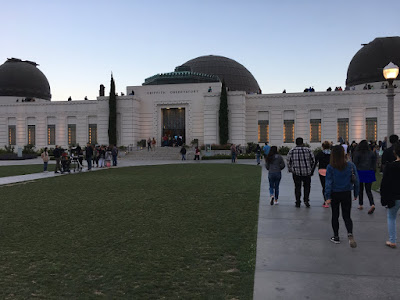 If the Griffith Observatory looks familiar, it's probably because you've seen in a movie. This being Los Angeles, it's been featured in dozens of films, including Rebel Without A Cause, The Rocketeer, and - most recently - La La Land. 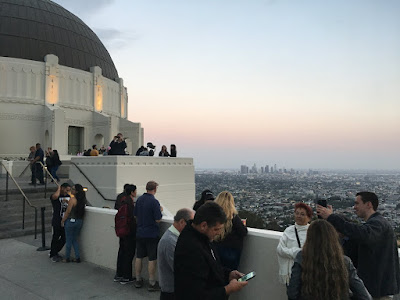 Of course, it doesn't hurt that aside from parking, a visit to the Griffith Observatory is absolutely free. 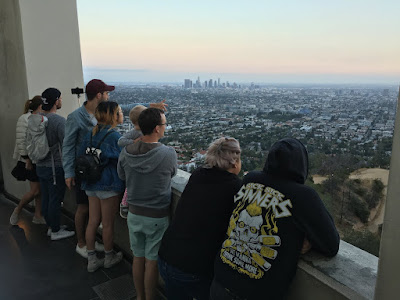 Hundreds of locals and visitors enjoying the view. 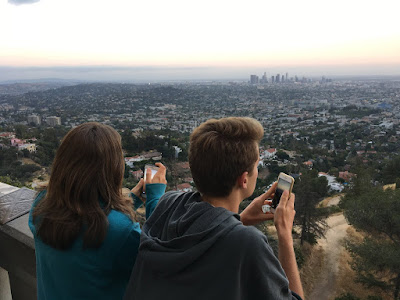 Including my kids, who were snapchatting their friends. 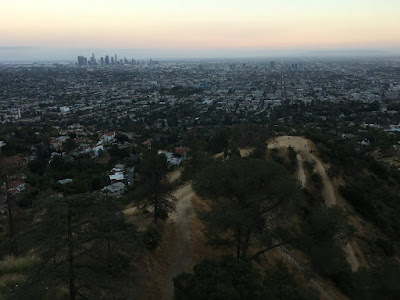 The Observatory is located on the south facing slope of Mount Hollywood. In the distance, to the left, is Downtown Los Angeles. 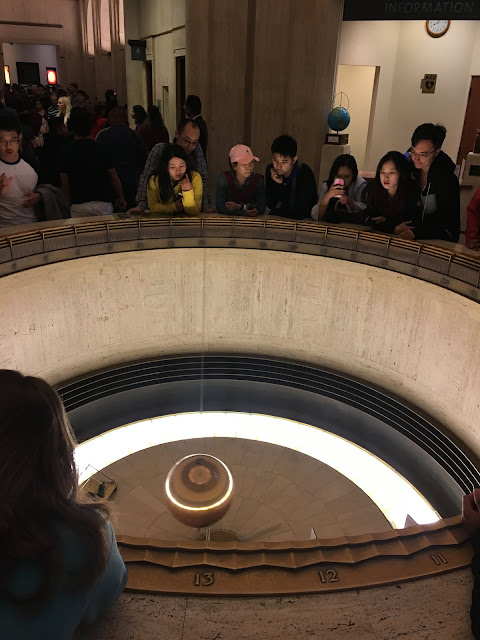 Inside, people enjoying the Foucault Pendulum. According the the Observatory's website: "The gently swaying pendulum in the central rotunda has long been a visitor favorite since the building opened in 1935. One of the largest such devices in the world, the fully restored pendulum is actually an elegant scientific instrument which demonstrates the Earth's rotation.

The 240-pound bronze ball, suspended by a cable 40 feet long, swings in a constant direction while the Earth turns beneath it. The pendulum is mounted to a bearing in the rotunda ceiling that does not turn with the building as it rotates with the Earth ... As the day passes, the pendulum knocks over pegs set up in the pendulum pit and indicates the progress of rotation." 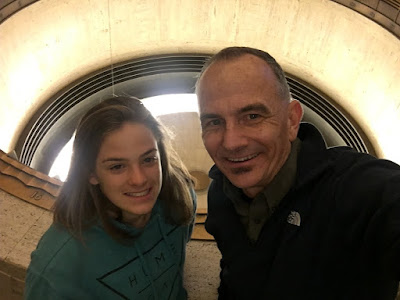 My daughter and I - good memories from 2013 on a previous visit. 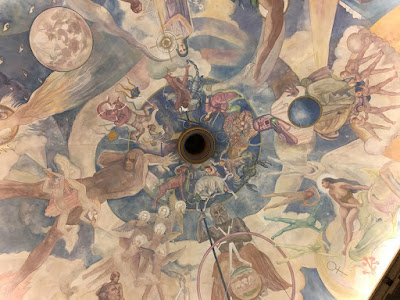 Ballin Murals on the ceiling. 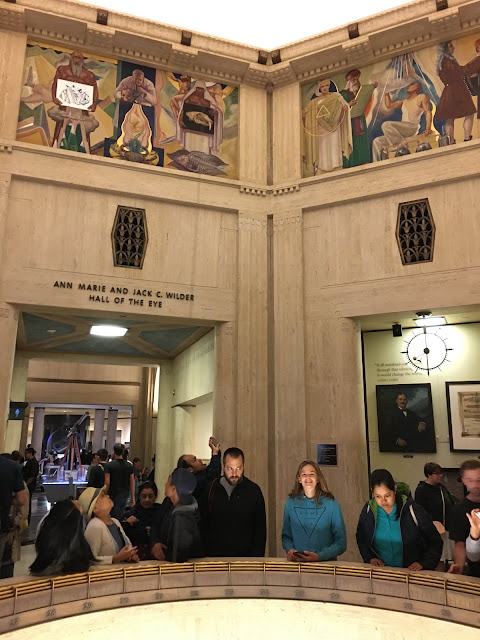 Watching the Pendulum with more Ballin Murals on the walls inside the Central Rotunda. 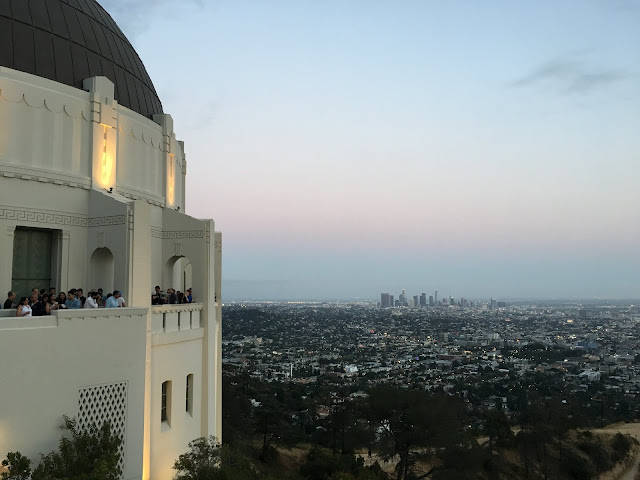 Back outside, plenty of people enjoying the view as the city lights became visible. Unlike the Empire State Building in New York or Sears (now Willis) Tower in Chicago, the view - and the Observatory itself - is free. 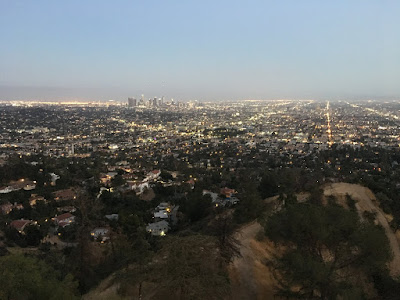 City lights - the street to the left coming directly into the hill is Normandie Avenue. At over 22 miles long, Normandie is one of Los Angeles County's longest north-south streets. 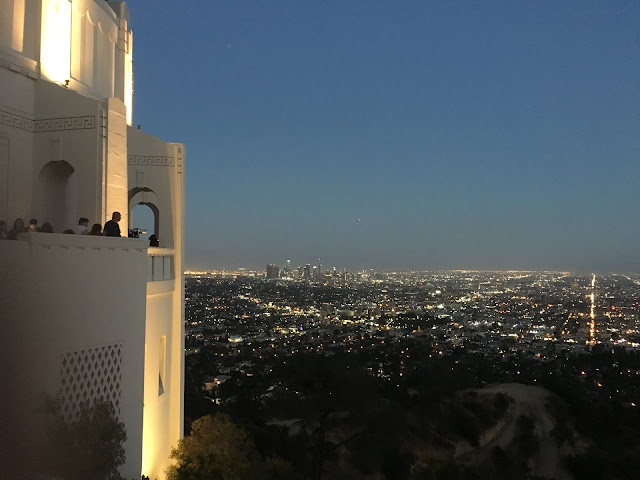 The Observatory is open every evening until 10pm. We stayed until around 9pm. Here's a final view of the city, downtown Los Angeles, and the Observatory. 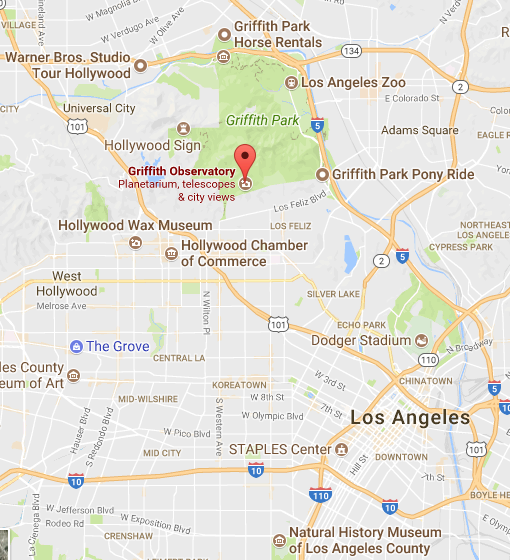