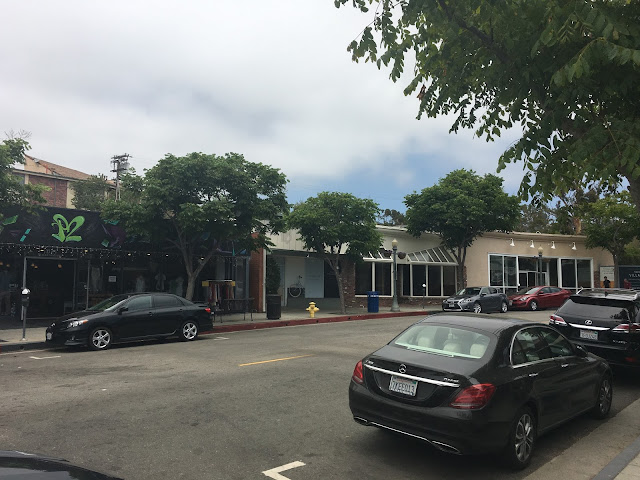 Swarthmore Avenue, Pacific Palisades. Last June my wife and kids and I were in the area and took a few minutes to walk up and down Swarthmore. 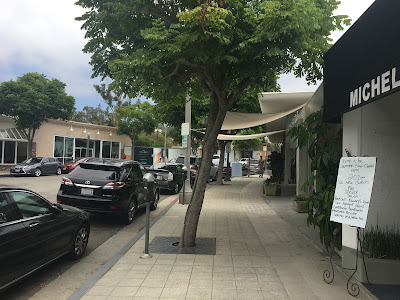 This entire block of mid-century era stores had been bought up by Caruso Affiliated - and was slated for a major redevelopment. I wanted to see this all before it was gone. 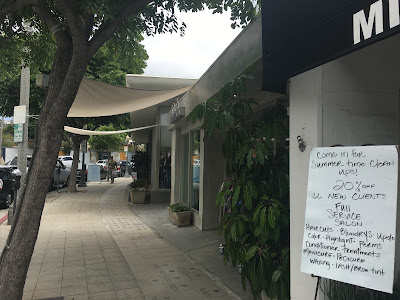 When my parents moved to Pacific Palisades in 1968, the community felt very middle class. Back in 1972, I remember my grandmother (born in Poland) looking at modest homes just a few blocks from here for $26,000. Today, those same homes would sell for $1.8 million. Yeah, crazy. 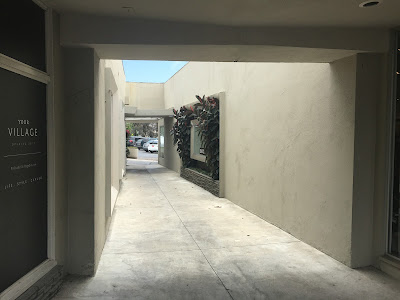 Here's a walkway between Swarthmore and the parking lot out back. To the left was the entrance to the old Baskin Robbins - that many of my friends worked at. To the right, a women's clothing store that my other grandmother worked at for several years. 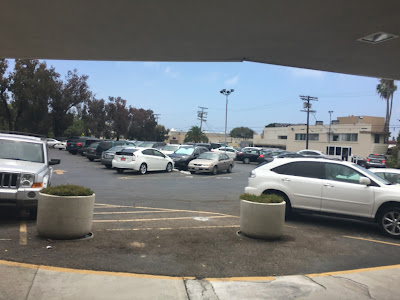 The nondescript parking lot out back. Redevelopment plans call for this being turned into additional retail and small park. Remember the lyrics to the old Joni Mitchell song: "take paradise and put in a parking lot"? This might be one of the few cases where the opposite happens. While not paradise, I'll take a park over a parking lot any day.

So, this being Los Angeles, where do the cars go? Plans call for a three story underground parking structure. 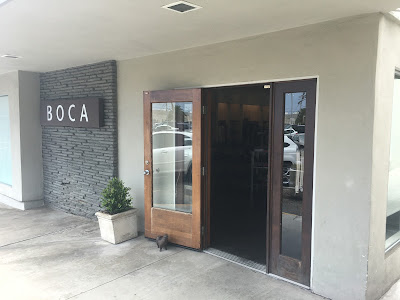 The women's clothing store my grandmother worked at back in the mid-1970's. It was called La Femme, today it's called Boca. 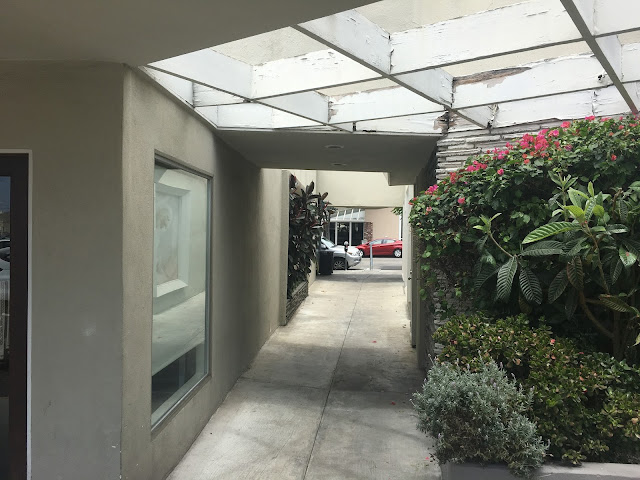 I LOVE this photo, taken from the edge of the parking lot, looking back towards Swarthmore Avenue. Boca on the left, what was Baskin Robbins on the right. Yes, the woodwork up top needs paint - but I really like the planter on the right, the mid-century architecture, the simple walkway, and most of all the MEMORIES of growing up here, and walking through here hundreds of times. 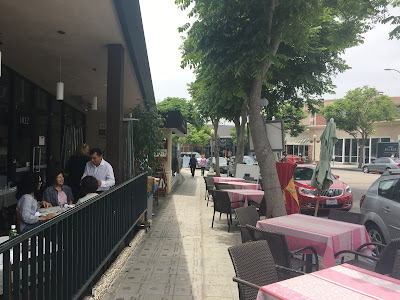 Back out on Swarthmore, outdoor dining along the street. Pacific Palisades is located along the coast in between Malibu and Santa Monica, and up against the Santa Monica Mountains.

The vast majority of people I went to High School here do not live in this area. Even back 35 years ago, the community had become too expensive to consider moving back after college. There's a small handful of people from my High School graduating class who figured out a way to live in the community. Most everyone else is living in another part of California - or out of state. 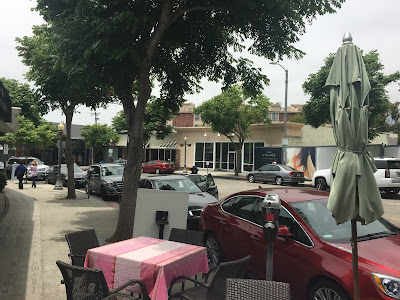 The Caruso Affiliated redevelopment plans call for a re-imagined "Bay Theater" across the street - on the footprint of what was at one time a popular local restaurant, Mort's Delicatessen. 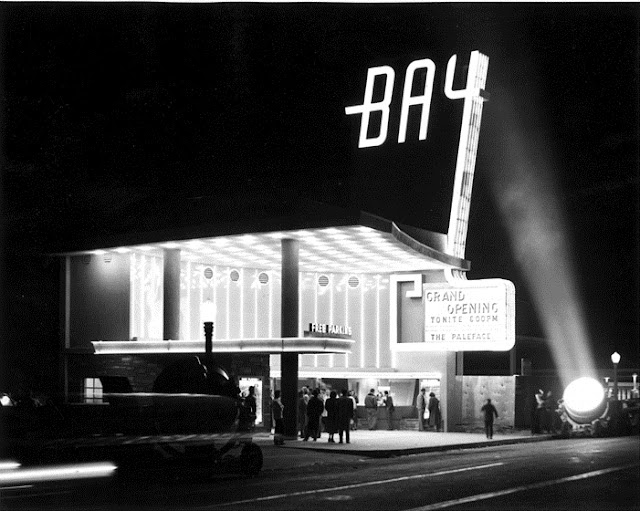 The original Bay Theater (1948-1978) was located a few blocks away on Sunset Blvd, and still holds a special place for anyone who lived in the community during that era. The new Bay Theater will be much smaller, and a multiplex. With theaters closing left and right around the country, here's hoping this new Bay will be able to pencil out financially. 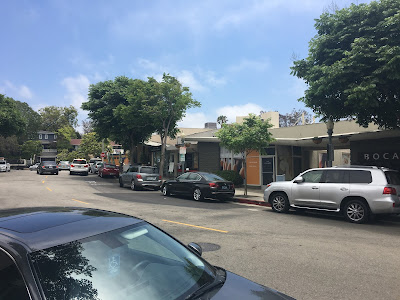 These one story buildings will be replaced with a mixture of one and two story Cape Cod style buildings. While most residents are excited about the new project, some are concerned that the street will look less like a real place and more like an outdoor mall - or Hollywood movie set. Caruso Affiliates other projects include The Grove in the Fairfax District and Americana at Brand in Glendale. 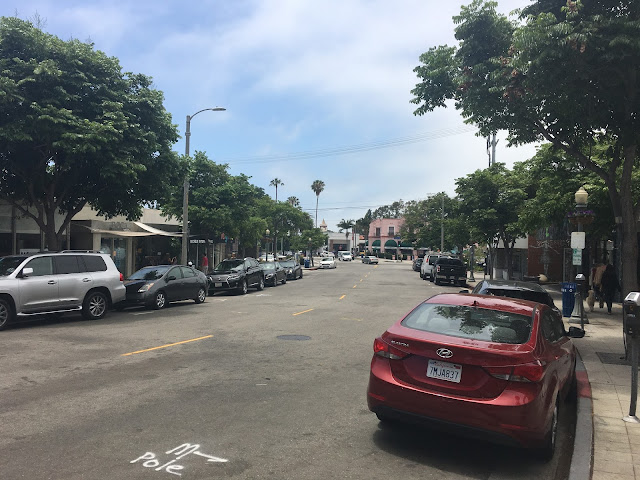 This is looking down Swarthmore towards Sunset Blvd. This section of Swarthmore will also be narrowed slightly, with wider sidewalks and one way traffic.

The pink building on the corner of Swarthmore and Sunset is the original "business block" - the 1924 Spanish Colonial Revival. In the distance is the bell tower of Palisades Elementary School. 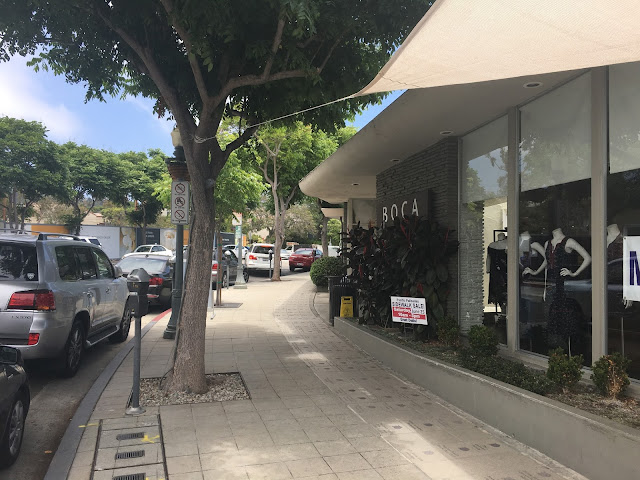 For me, lots of nostalgia and lots of memories on this street. I'm so very glad we took time and snapped up these photos. Just two weeks after we were here, the entire area was fenced off and - yes - the buildings were bulldozed. All that exists now are photographs and memories. 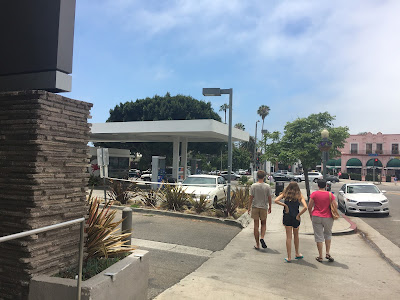 My wife and kids walking towards Sunset Blvd. 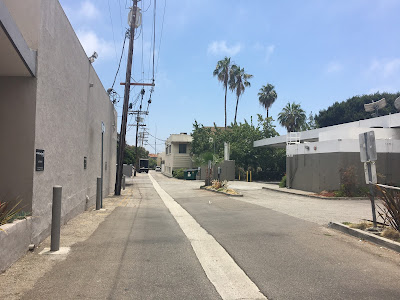 Final view the alley running adjacent to Sunset Blvd. The building on the left is a bank - I worked as a bank teller there for a summer - before moving out of the area.

Like most alleys, this is fairly unattractive - although, the palm trees are nice. 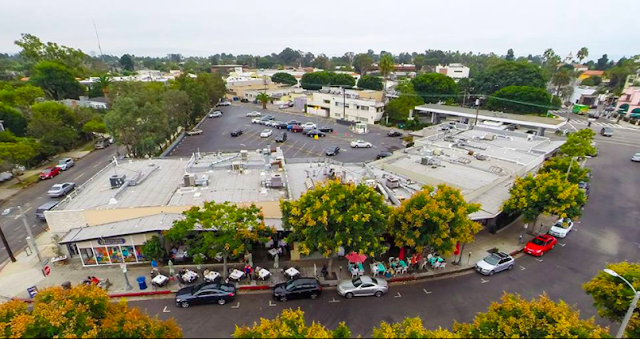 Here's an aerial view of Swarthmore that I pulled from the "Palisades Village" Facebook group. Gone, but not forgotten. 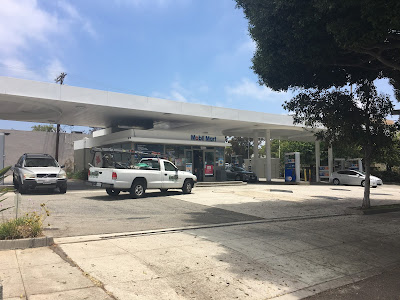 The Mobil Gas Station on the corner of Sunset Blvd and Swarthmore Avenue. This is part of the re-development plans and is slated to be replaced with a two story retail building. Even people who weren't enthusiastic about the overall project seemed to be OK with that. 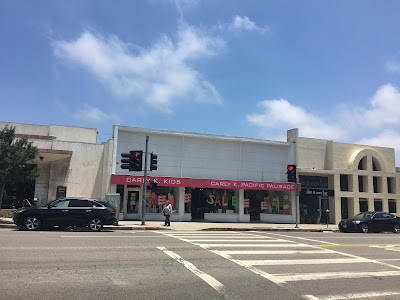 In addition to most (but not all) of the buildings on Swarthmore, Caruso Affiliates also bought several of the adjacent buildings along Sunset Blvd. Part of the gray building was a toy store  - "The Toy Shack" - when I was a kid, with a speciality in magic tricks. 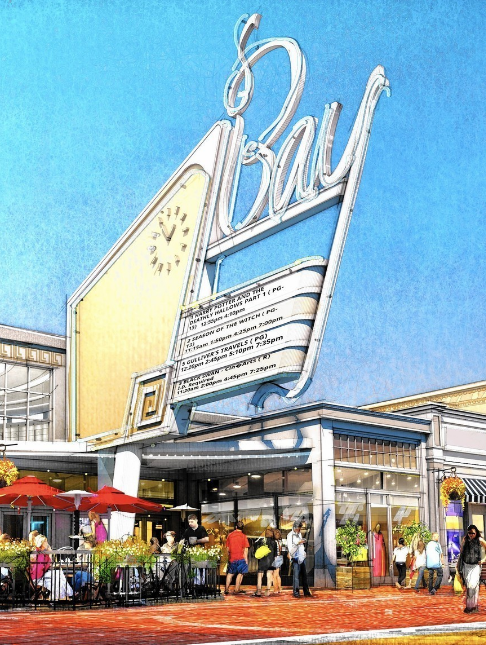 So, what will this section of Swarthmore and Sunset Blvd. this be replaced with? Here's one of several images released by Caruso Affiliates - featuring the highly anticipated re-imagined Bay Theater - and a link to the project on their website.

The project is called Palisades Village, scheduled to open Summer 2018.