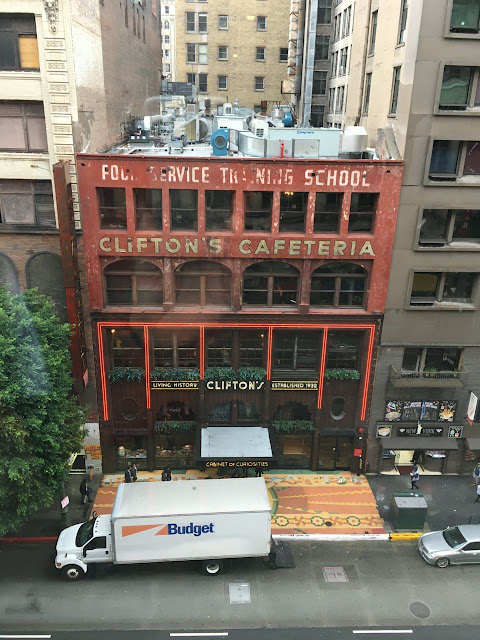 This past January, my son and I were back in Los Angeles for a father / son weekend to celebrate his 16th birthday. We took time to explore places he remembered from growing up in L.A. - and check out a few new things as well.

Sunday morning, after attending church at Reality L.A. (in Hollywood) we drove over to Broadway in downtown Los Angeles for lunch at Clifton's Cafeteria. I'd been inside Clifton's once (here's a link to a previous post) since they underwent their major remodeling - but neither of us had eaten there. The parking garage across the street made for some nice photos (except for the "Budget" moving van). 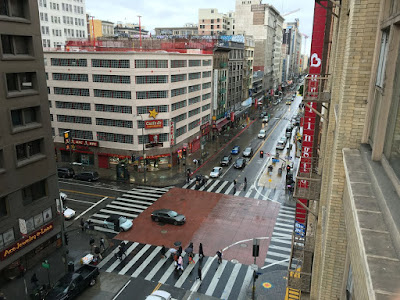 The garage actually had a fire escape and open window that we walked out on to - with some pretty cool views up and down Broadway. This is looking south. 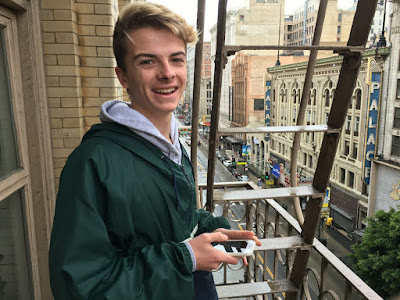 Can't believe we could just walk out on the fire escape. 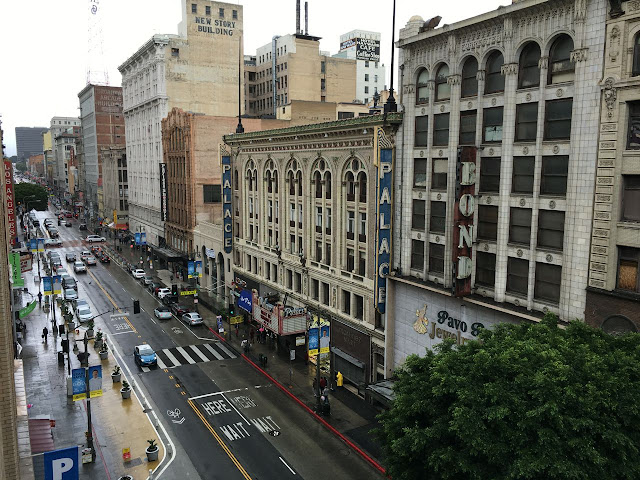 Broadway looking north. The streets were still wet from the rain earlier that morning - which made for a nice photos. 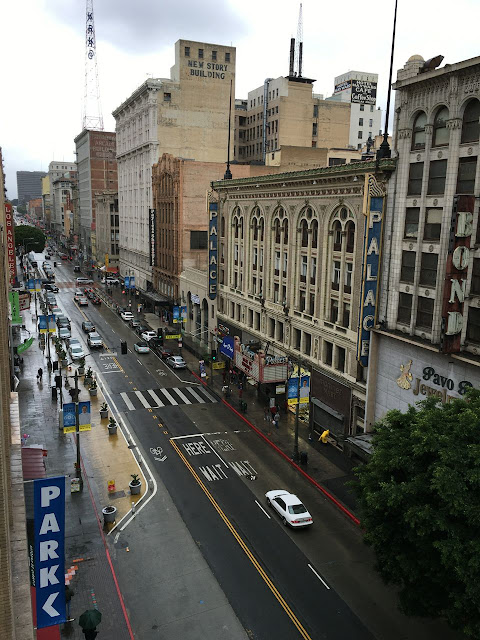 Same view.  It does rain occasionally rain in Los Angeles - but we're still in the midst of a historic drought. 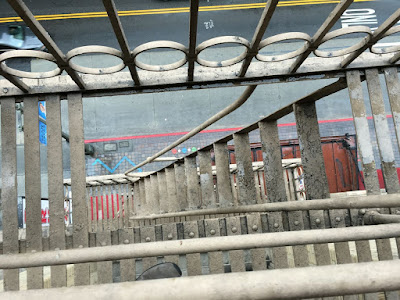 The fire escape. So cool ---  except if you're afraid of heights. Definitely old school. Can't believe you can do this. 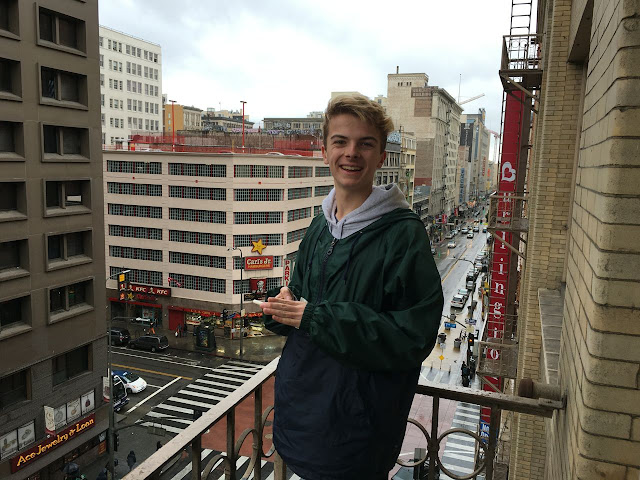 A couple more final photo. Here's a link to the garage, "St Vincent Jewelry Center Parking" located at 639 S Broadway. While parking for the day is $15 during the week, it's just $6 for the day on Sunday - which for downtown Los Angeles is actually reasonable. 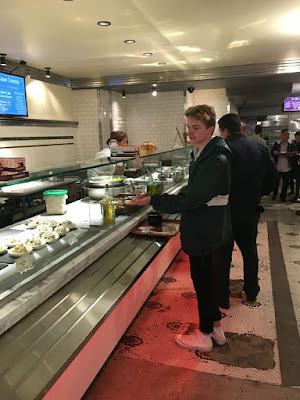 Clifton's Cafeteia is ... a cafeteria. What makes it unique is that it's been at this same spot on Broadway since 1935 AND is considered the largest cafeteria in the world. Seriously. 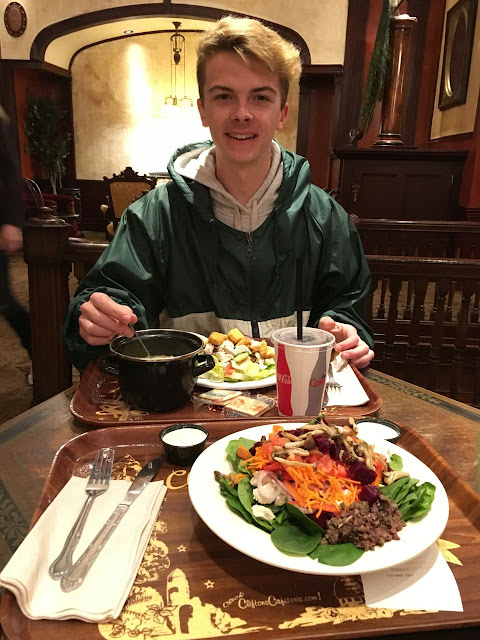 Lunch. My son the soup and salad, I opted for the salad. Good conversation during lunch about the sermon (earlier that morning at Reality). 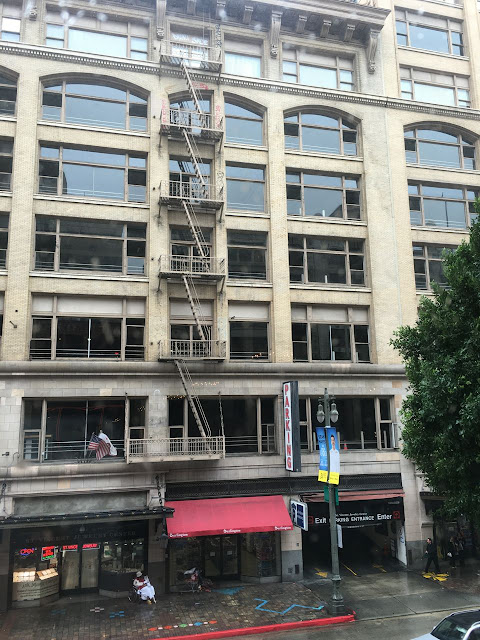 Here's a view from the second floor of Clifton's of St Vincent Jewelry Center Parking, where we parked. 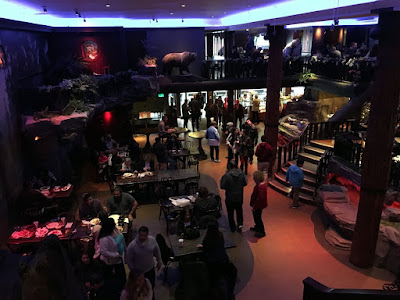 Clifton's is AMAZING. The inside is designed to look like the redwoods outside of Santa Cruz, California where founder Clifford Clinton spent time as a youth. 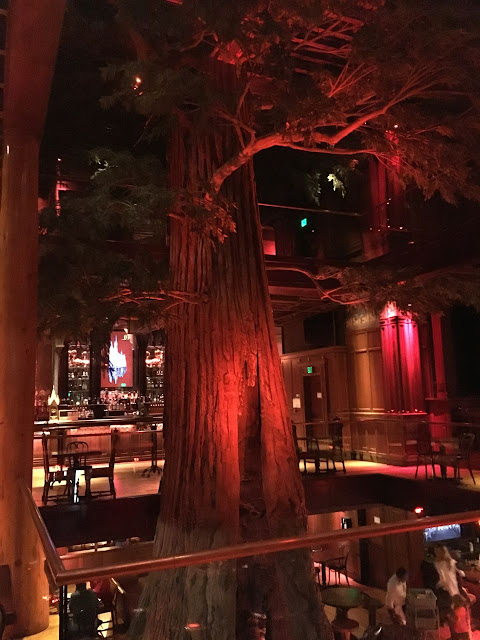 And this - this MASSIVE three story faux Redwood in the middle of the restaurant. 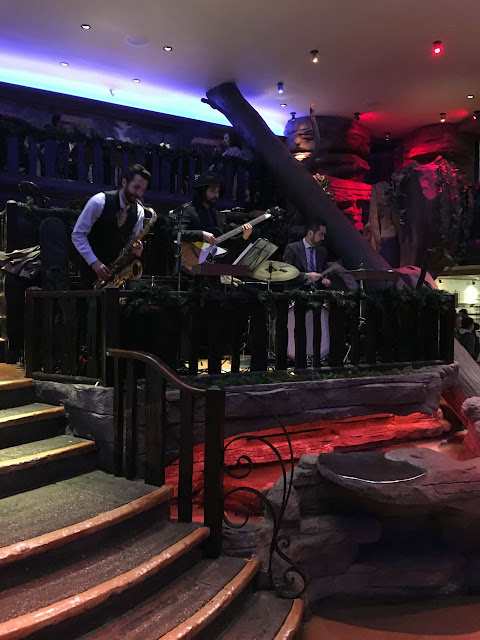 The history behind Clifton's the restaurant, and it's founder Clifford Clinton, are equally as amazing. According to The Native Angeleno, Clinton "was born in Berkley in 1900, the third of ten children. His parents, Edmond and Gertrude, were missionaries, captains in the Salvation Army. Edmond owned a chain of restaurants in San Francisco, which gave the Clintons the resources to travel around the world and spread the word of Christ. They all lived in China for two years, from 1910 to 1912, volunteering at a Christian orphanage for the blind."

Clifton's opened a chain of cafeteria's throughout Los Angeles. The Broadway cafeteria, which opened in 1932 and has been at it's current location since 1935, is the last surviving restaurant of the chain.

During the height of the Great Depression 10,000 people ate free over a 90 day period. Many wealthy people give the charity, but Clinton's generosity nearby bankrupted him. To stay solvent, Clinton then opened an emergency "Penny Cafeteria" - feeding an incredible 2 million people for free over the next two years. Here's a link to a previous post with a lot more information about this incredible individual and his legacy. 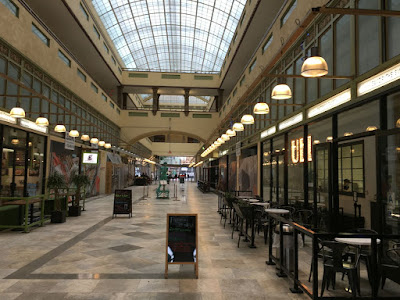 Gentrification is going on all over downtown Los Angeles. The 1924 Broadway-Spring Arcade Building, just down the street, catered almost entirely to Latino immigrants up until a few years ago. Here's a link to a previous post with some photos from late 2013.

Two and a half years later, it's beginning to look similar to Spring Street and Main Street, it's high end boutiques and eateries. Apparently, Apple just signed a lease down the street from Clifton's on Broadway. This entire area will look radically different in a few years. 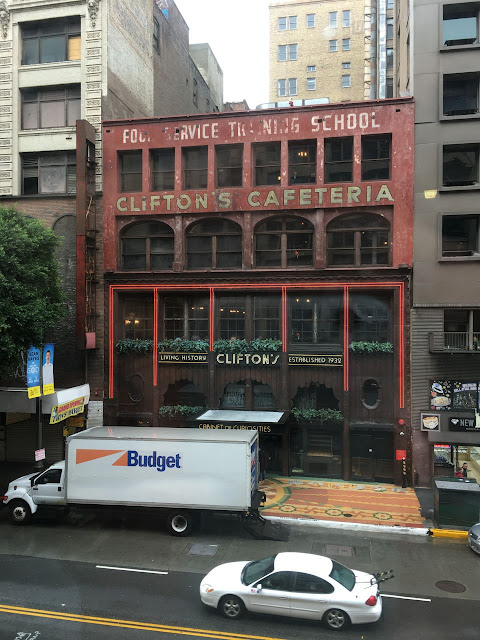 A final view of Clifton's from the parking garage. I had hoped that the moving van would have, well, moved ... but that was not to be.

Good excuse for my son and I to come back - next time bringing the entire family.