Experiencing L.A. at the Venice Canals 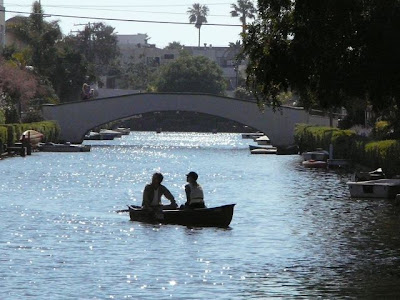 The Venice Canals are a series of historic waterways in small, residential neighborhood a few blocks from Venice Beach. It's yet another one of Los Angeles' "hidden gems". 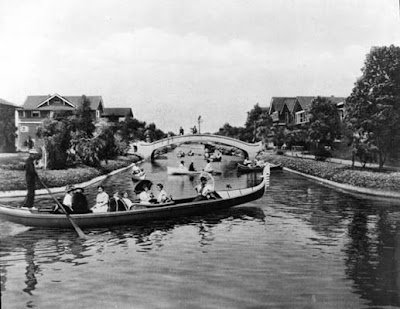 Venice, California opened to the public on July 4, 1905. The community was the dream of millionaire Abbot Kinney, who modeled the area after it's Italian namesake, complete with gondoliers, covered colonnades, art, and culture. 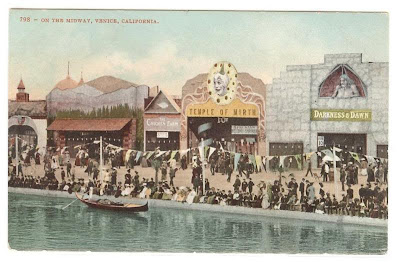 Then, as now, most people weren't looking for high culture at the beach, and Abbot Kinney quickly added varied amusements, rides, and attractions. Much more of Venice's fastinating and colorful history can be found in Jeffrey Stanton's outstanding book "Venice California: Coney Island of the Pacific." 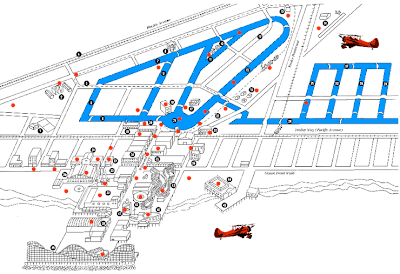 Here's a map of the entire canal system, circa 1925. Unfortunately, the canals didn't have an adequate drainage system, and in 1929 the larger group of canals in the center of the map were filled in as streets, leaving only the smaller grid on the right. 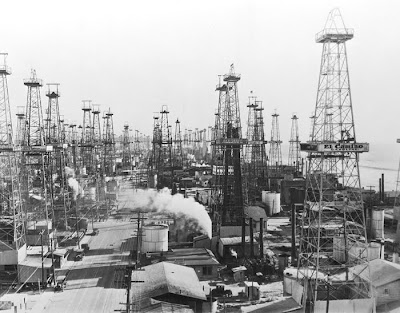 Oil was discovered in the 1930's, creating an short-lived economic boom, but ultimately adding to the area's decline. 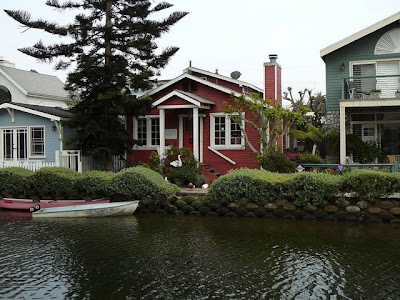 The area, especially around the beach and the four (or six, depending on how you count them) canals, began to turn around the the 1970's. 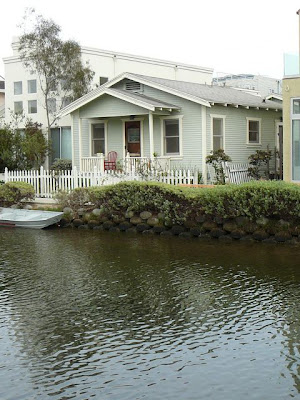 Homes along the canals became sought after. While many of the original cottages remain . . . . 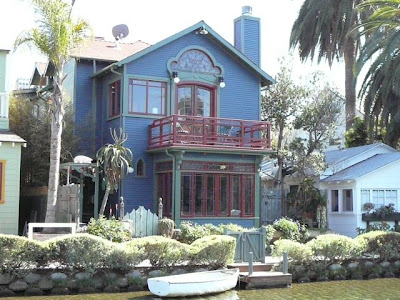 . . . many of the more dilapidated ones were razed, with larger homes taking their place. 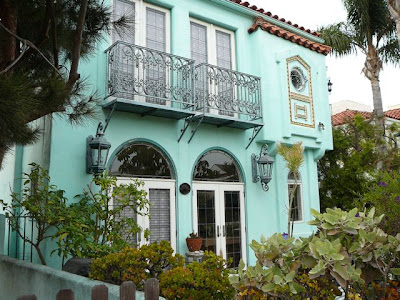 The neighborhood has a beautiful mix of styles, colors, and sizes - although I'm sure there are some long-time residents who are unhappy with the gentrification. 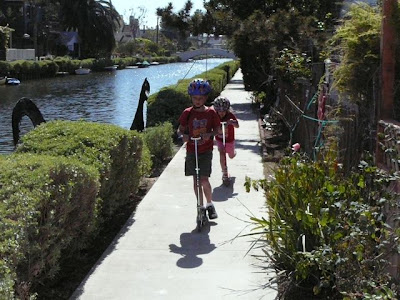 I took my wife and kids on a walking tour of the canal district. It was great, something I'd definitely recommend to others! 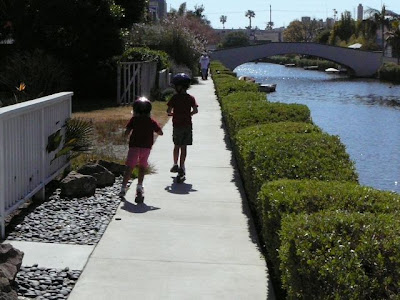 My wife and I both walked, but we allowed our kids (who were 5 and 7 at the time) to bring their little scooters. 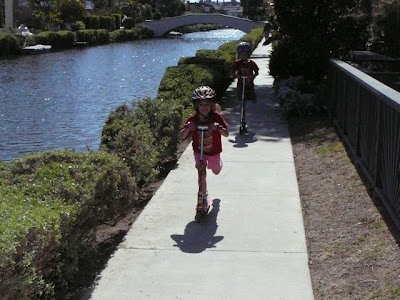 The sidewalks are narrow - there's actually a city ordinance prohibitting bikes, rollerblades, skateboards, or scooters on the sidewalks. Oops. 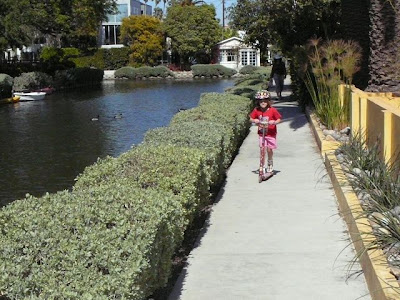 Makes sense - but little kids on a scooter doesn't seem the same as an adult on a bike. Our kids are older now. If we went back, we'd all be on foot. 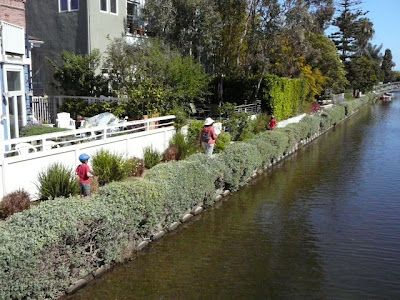 It's a beautiful, relaxing place for a walk.

"I had to ask the question: How can I have lived in LA for three years, and never experienced the Venice Canals?" 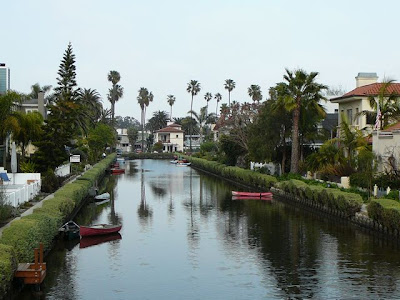 Or what another Yelp reviewer wrote:

"So you're walking down dusty streets, you turn a corner, and suddenly you're transported to another world. The canals with their paths through the back gardens are on oasis only a few blocks from the Venice Boardwalk, the motherload of dreck.

"Usually I feel resentful toward the 1% and their ostentatious houses. Not here. More power to these people who, rather than a gated community, live in such a beautiful place with people walking around gawking at them and their houses." 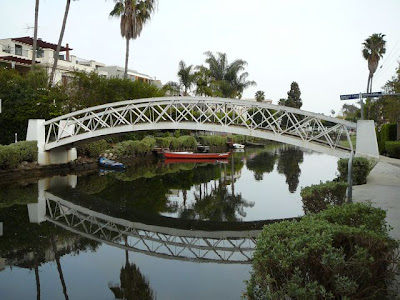 These photos were taken over a couple days: once with my wife and kids - and other with a friend visiting from Europe. Above, one of the original 1905 pedestrian brides. 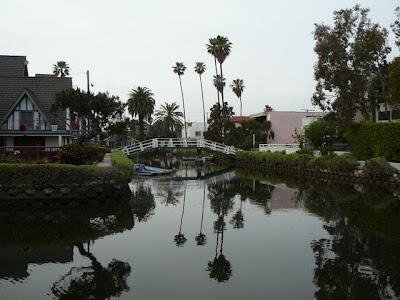 Another bridge, another view. 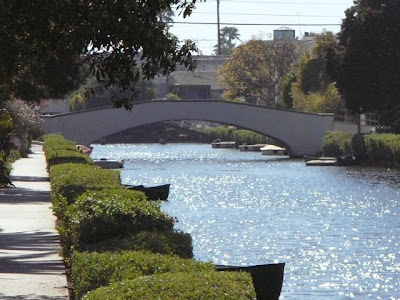 One of the original 1905 Dell Avenue brides. You can drive over this (one way). 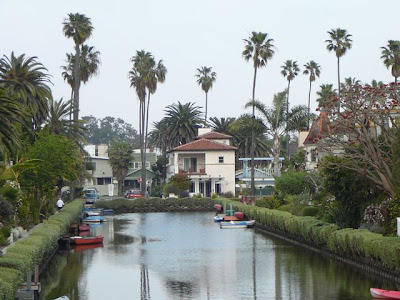 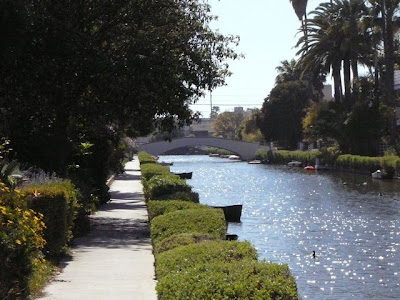 Another view of a Dell Avenue bridge. We also noticed several canoes and small boats in front of homes. That would be fun. 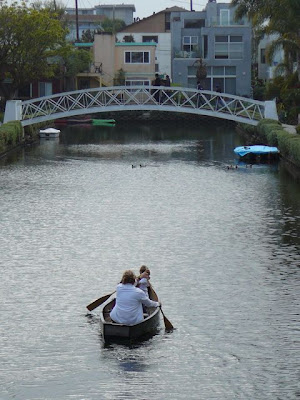 In fact, here's a mom and her kid out canoeing. Pretty cool anywhere, but especially in the heart of the city like this. 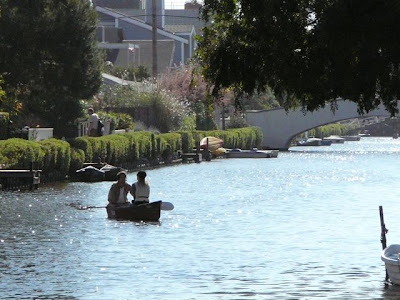 A couple enjoying time on the water.

Whether you live in Los Angeles or are justing visiting, I highly recommend a walk through this amazing little neighborhood! Of course, please be considerate of the residents.

Parking is virtually impossible in the canal district: try something along North or South Venice Blvd, or maybe the neighborhood to the east (around Olive Avenue). You'll also notice that the canal district is close the beach, I wouldn't recommend trying to find parking anytime during the summer on a weekend - unless you get there early in the day and are prepared to pay.

Here's a link to more information.

Your first photo is especially good.