Another Walk Up Pico, Part II 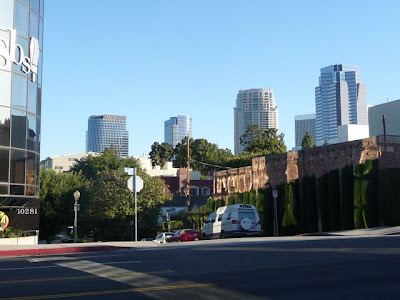 This time last year I took an early morning walk up Pico Blvd from the beach into the heart of Los Angeles. Here's a link to the first five miles. I started at 5:45am and by 7:15 was nearing Century City (pictured, above). 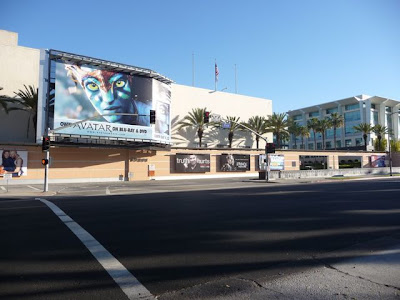 The 20th Century Fox Studios are located on the corner of Pico and Motor Avenue. 20th Century is one of the six major Hollywood Studios. The others are Sony (located in Culver City), Disney, Warner Brothers, Universal (all located in the San Fernando Valley) and Paramount (the only studio actually located in Hollywood).
In front of 20th Century Fox were billboard ads for the April 2010 DVD release of Avatar (which I've successfully avoided seeing - so far). 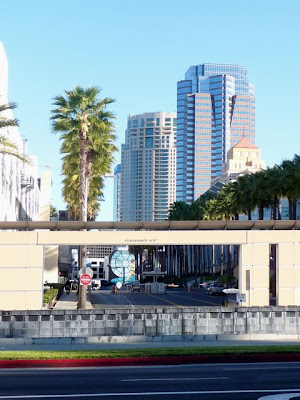 If you look carefully, you'll see the guard house just inside the entrance. Back around 1991 a friend working at Fox gave me a tour of the studio. Got to have lunch in the commissary; saw comedian Mel Brooks walking around. Really unique L.A. experience.
As an aside, Fox and Disney are the only studios that do not offer any kind of studio tour. Walking by was a bit like walking by the Wonka Chocolate Factory in the Roald Dahl novel. 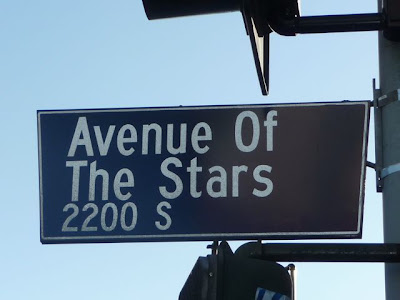 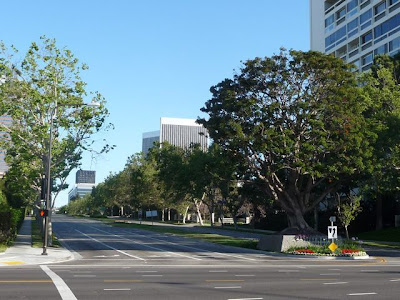 Looking northwest up Avenue of the Stars. Century City is a large office and residential complex located on the former backlot of the 20th Century Fox Studios. Fox sold 180 acres of their backlot to developer Alcoa in 1961, with the first building (my dad's old office building) opening in 1963. 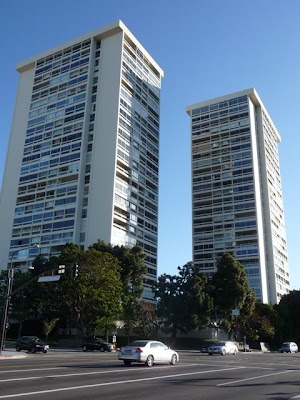 The Century Towers at the corner of Pico and Avenue of the Stars. Designed by world renowned architect I.M. Pei, the Century Towers were built in 1964. They were converted to condominiums in 1972 - with 1600 square foot condos currently listing for $1.8 million. Originally, Century City was going to have dozens of residential towers like this - but the surrounding communities put the cabash on that. 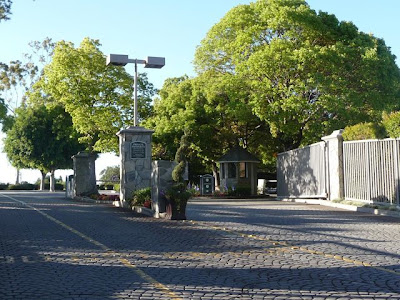 Just up the street is the entrance to the Hillcrest Country Club. For years, Jews were barred from membership at the Los Angeles Country Club, located a mile away - so they created their own, equally impressive, country club. Members have included studio heads and many of Hollywood's most famous actors including Grocho Marx, Milton Berle, Jack Benny, Danny Kaye, George Burns. Considering it's "who's who" of members past and present, it has an extremely understated entrance. 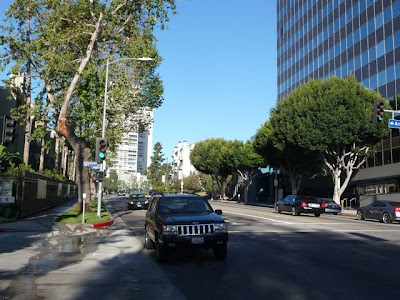 Pico Blvd, looking back west towards Century City. This area of Los Angeles, east of Century City and just south of Beverly Hills, is known as Pico-Robertson. There are twenty synagogues operating in the community - yes, it has a huge Jewish community. 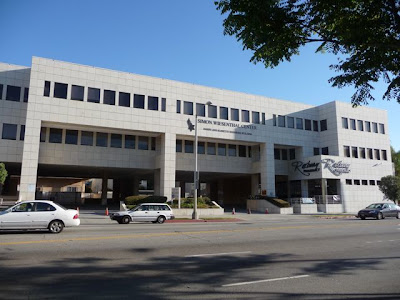 The Simon Wiesenthal Center and Museum of Tolerance, located at the corner of Pico and Roxbury Drive. 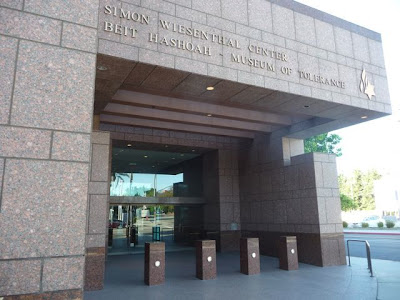 The Muesum of Tolerance is designed to examine prejudice and racism, with a particular emphasis on the Holocaust. I'm embarrassed to say I've never been inside. I thought about going when we lived in Los Angeles, but themes were simply too intense for our young kids. Of course, I could have gone by myself . . . I just never did. Something for the future.
Felt like the Skirball Jewish Cultural Center - which our kids loved going to - was much more age appropriate. 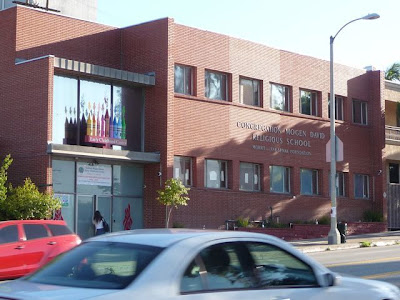 One of several religious based schools in the community. 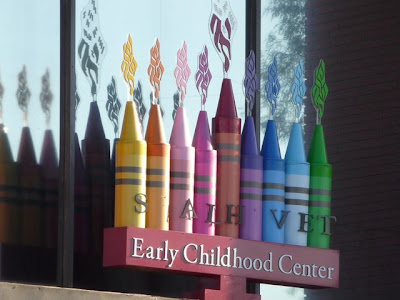 OK, super creative: crayons and a menorah (why can't evangelical churches come up stuff like this?). 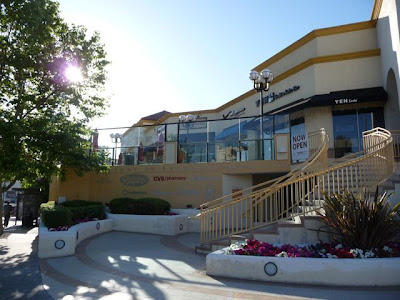 Ralphs Supermarket and CVS Pharmacy on the corner of Pico and Beverwill Drive. I liked how the sunlight is coming through the sycamore street tree. Amazing how much you appreciate trees in a city. 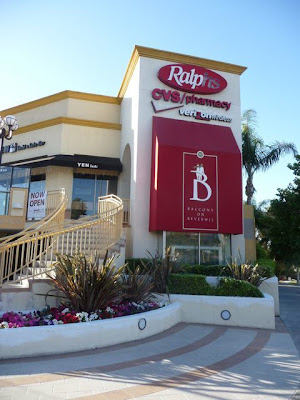 Parking is in an underground lot below. 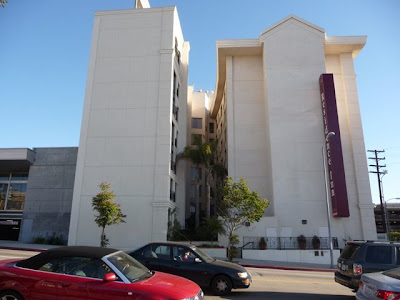 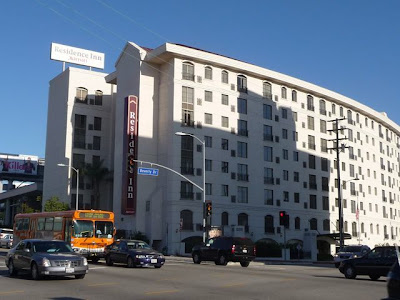 Some co-workers stayed here a few years back. Beverly Hills adjacent, I guess. By no means a luxurious place, but it did the trick. 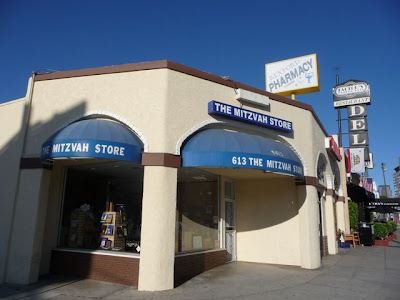 Just down the street: The Mitzvah (as in "Bar Mitzvah") Store. Mitzvah is Hebrew for "commandment" (as in the Ten Commandments). 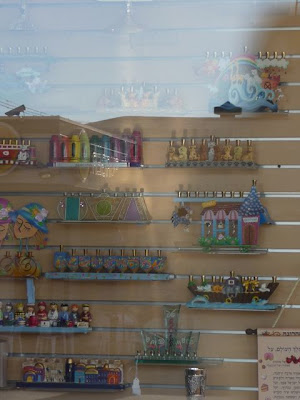 No lack of different styles of menorahs . . . 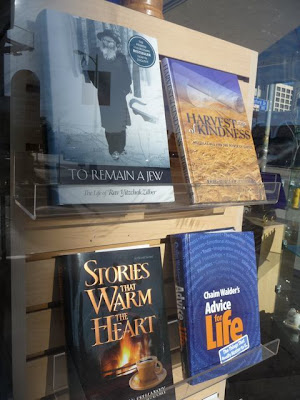 . . . and books. Gifts and "Stories that Warm the Heart" - in some ways, reminds me of the Jewish equivalent of a Christian book store. 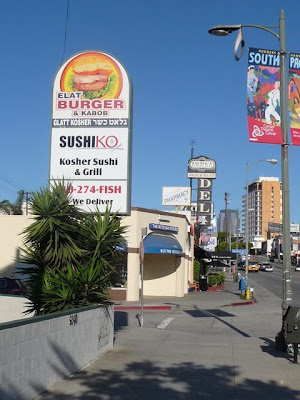 Next door is Elat Burger and Kabob (Kosher) and Sushi KO (Kosher).
Wow, Kosher Sushi - learn something new every day. 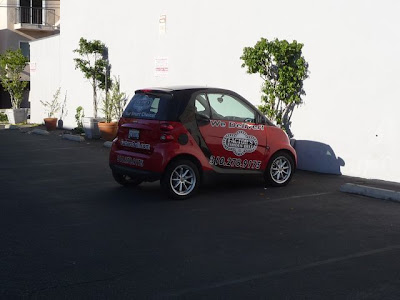 Smart car - with gas approaching $5 a gallon in California, I don't think many people are laughing anymore. 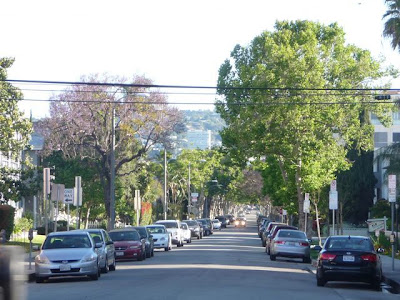 Looking north up one of the residential streets (Cardiff, I believe). The city limits of Beverly Hills start just a block away. 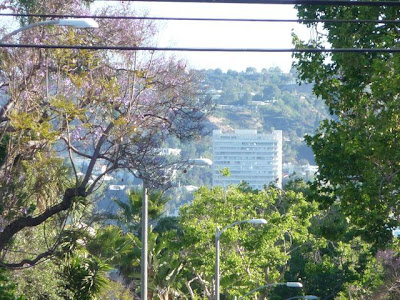 In the distance, the Sierra Towers on the western most edge of the city of West Hollywood. Originally built as an apartment building in 1965, at 32 stories it remains Los Angeles tallest residential tower. There's a 2300 square foot condo on one of the top floors currently listing for $3.9 - million. Yikes. Recession, what recession?
View Larger Map
Lots more to see, and I still had plenty of time before needing to catch a bus and getting back to Santa Monica by 9am. More on "another walk down Pico" - and Pico-Robertson - in my third and final post next week.
.© 2011 www.experiencingla.com
.
Posted by David from L.A. at Saturday, May 14, 2011

nice walk - you made good time

great blog - "The Century" condos in Century City at 42 stories is now the tallest condo tower in Los Angeles. you actually have photos of "The Century" in your first/third photos on this post. The Sierra Tower is still pretty impressive.

Enjoying your walk aaaall the way from Georgia. Born and raised in West LA (Pico-Robinson) and you just helped me with a bit of homesickness. Thanks bro!