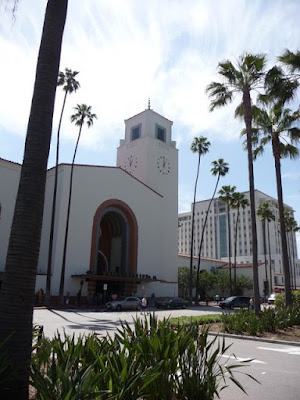 Last May I took a group of homeschool families on a walking tour of downtown Los Angeles. Our first stop was Olvera Street, the oldest street in Los Angeles, which I described in an earlier post last year. Across the street from Olvera Street is Union Station. 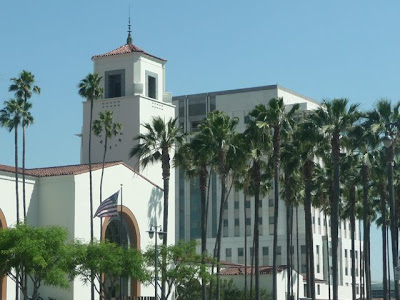 Union Station, opened in 1939, is considered "the last great railway station" built in the United States. By the 1970's, it had become a virtual ghost town. I remember going down there as a kid - kind of depressing. 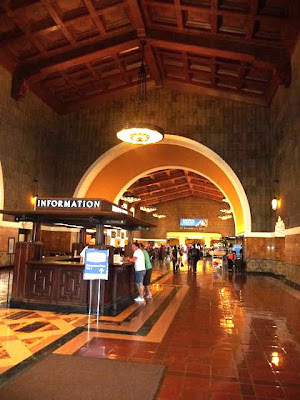 The past two decades have seen a resurgance in activity by commuters coming by trains from the suburbs and the terminus of the Red Line/Purple Line subways and Gold Line light rail.

We decided to take a very quick subway ride - just two stops - to see a bit more of downtown AND to give the kids the experience of a ride. 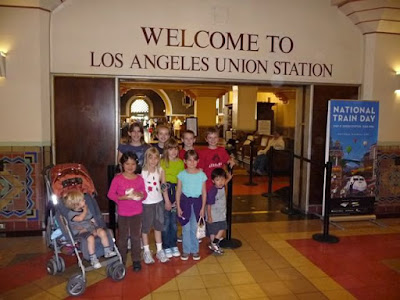 A tour of downtown = always more interesting with ten kids in tow. 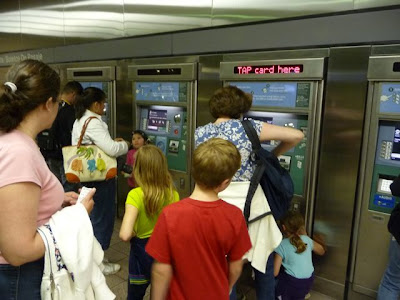 Lining up to buy tickets. 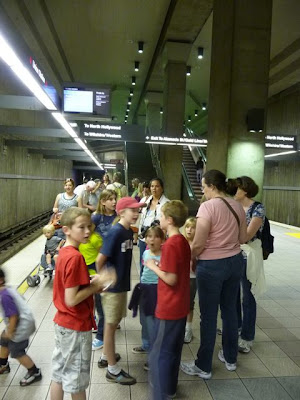 Waiting for the subway. 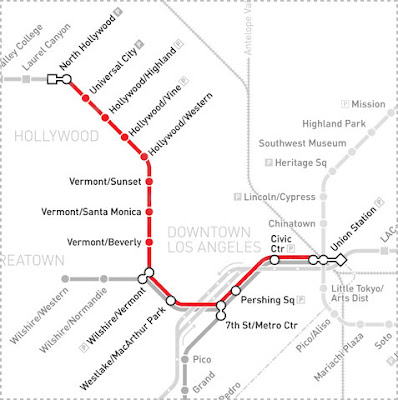 The Red Line subway goes through downtown, along Wilshire, north through Hollywood, terminating in the eastern edge of the San Fernando Valley in North Hollywood.

The Purple Line (grey in this map) follows the same direction, but continues west for another mile along Wilshire - ending in Koreatown. 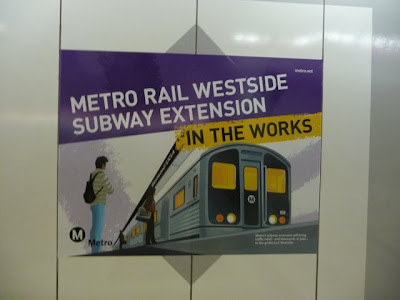 Plans are in the works for the Purple Line to continue another eight miles under Wilshire through Koreatown, Hancock Park, the Miracle Mile District, Beverly Hills, Century City, Westwood Village & UCLA. 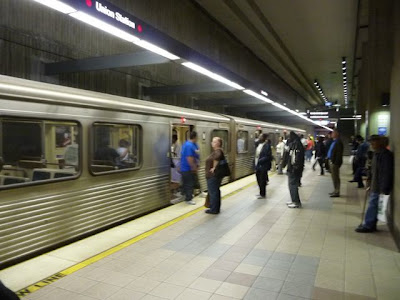 Here's our subway - do we have all ten kids? Let's go! 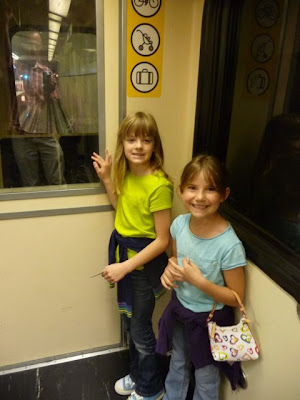 Front row seats (minus the seats) for my daughter and her cousin. 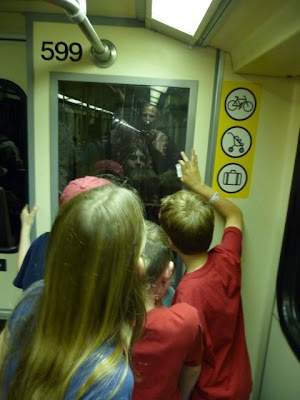 All the kids wanted to watch out the front window, which was actually pretty fun. In five minutes, we were at the Pershing Square Station, in the heart of downtown. 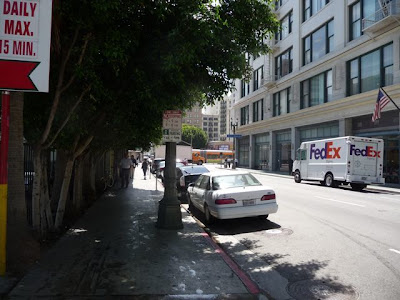 Getting off at the Pershing Square Station we walked a block southeast on Fourth Street to Broadway. Destination: the Bradbury Building and Grand Central Market. 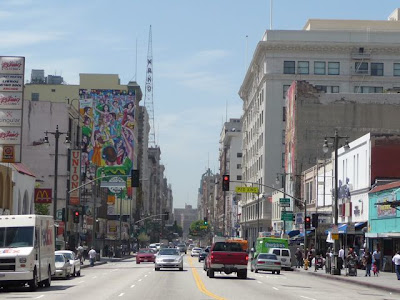 Broadway is a major commercial center, with most stores catering primarily to the city's huge Latino population. 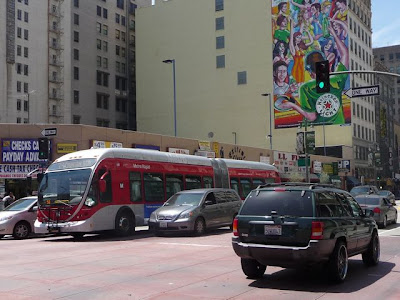 Heineken Light: is it a mural or a billboard? You decide. 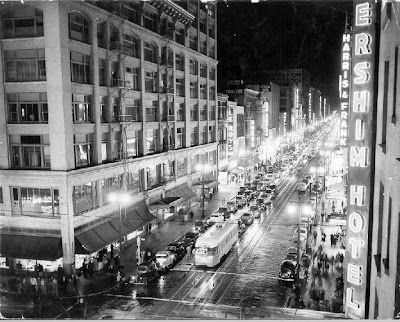 Through the 1920's-1940's Broadway was THE commercial center for Los Angeles. It was what Beverly Hills, or perhaps Santa Monica, is today - you get the idea. The city's largest hotels, movie theaters, and department stores were all located on or adjacent to Broadway. 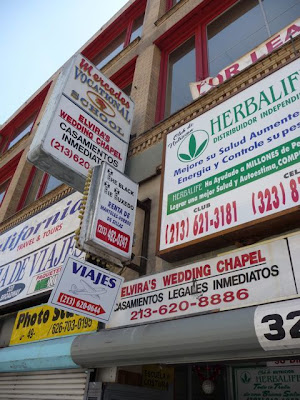 While you won't find the usual suspects from a suburban mall, businesses along Broadway seem to be thriving.

Meanwhile, over 50,000 people (mostly young, urban singles) have moved into downtown Los Angeles over the past ten years. I'm curious to see what Broadway will look ten years in the future. 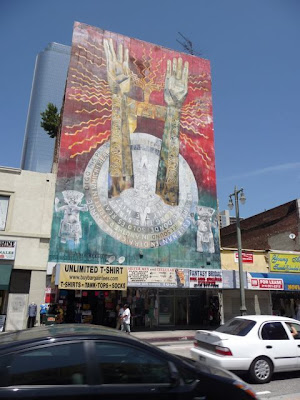 According to a 1932 documentary, made to highlight the city as it prepared to host the Summer Olympics the first time, in the early 1930's the corner of Broadway & Third had more foot traffic than any other intersection in the world. 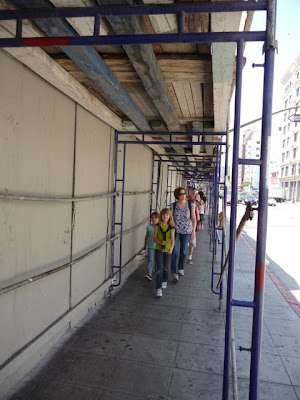 While Broadway is certainly not the business and commercial center of Los Angeles, there were a couple of very cool things at the corner of Broadway and Third: here's a link to taking kids to the Bradbury Building and the Grand Central Market.

That was some L.A. tour.Sometimes it is your own location that will give you a lot of interesting places to go to.

HAPPY 50TH DAVE! Keep up the great work. You're a smart guy and can reach an intelligent audience. You've been faithful over the years and God has blessed your ministry. Sincerely, Scott Golden

Greetings from Shanghai!! I had the honor of being on this walking tour and thoroughly appreciated the insight you gave us about our own "backyard". We are now getting to compare the public transit in LA to that of Shanghai. I never rode the subway in LA other than as a tourist. Here I ride it everyday for about 50 cents each way. There are 11 lines in Shanghai crisscrossing around through the city. The cars are clean thought can be EXTREMELY crowded during peak commute times. While it is never fun to be squished in the middle of the masses of people, there is something satisfying about experiencing public transit well designed and well utilized.

Happy 50th, Dave! You are still the amazing, mentally sharp, caring man I knew back in UCLA days. Thanks for inspiring guys like me with your gospel passion! -- Jason Willoughby