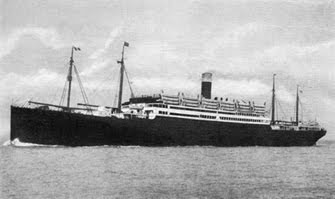 100 years ago today, October 20, 1910, my great-grandmother Katherine Golec and my grandfather Bruno Golec arrived at Ellis Island aboard the ship President Grant.

Four months earlier, my great-grandfather, Josef Golec came to the United States from the village of Ślemień (pop 1977), near Żywiec Poland. Once he got settle in the Chicago area, Josef sent for his wife and son, Katherine and Bruno (my great-grandmother and my grandfather).

My grandfather, Bruno, was just 10 months old when he arrived in the United States. 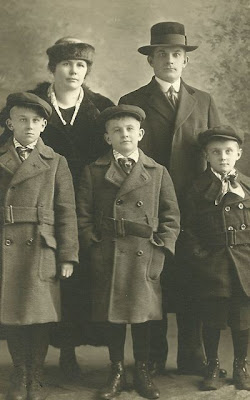 Here he is (on the left) several years later with his parents - my great grandparents - and his brothers Walter and Louis. "OG" means several things. I'll go with Original Golec.

In interacting with some folks from Poland, turns out Żywiec (where the Golec side of my family is from) is famous for a couple of things: 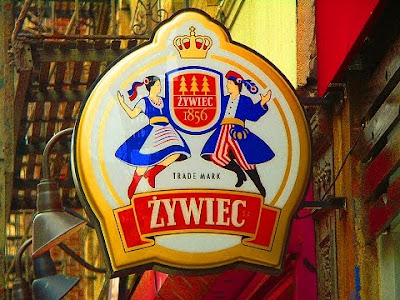 First: beer - and the Zywiec brewery. Maybe that's why my great grandfather Josef Golec ended up running a tavern in the Chicago area? According to my relatives, Prohibition (1920-1933) didn't seem to put a dent in his business. 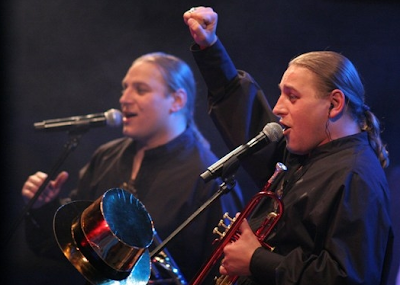 You've never heard of them? Neither had I, until a few months ago. The Golec brothers, Paweł and Łukasz Golec founded a Polish folk-rock group, Golec uOrkiestra, in 1998 in the village of Milówka, just south of Żywiec. 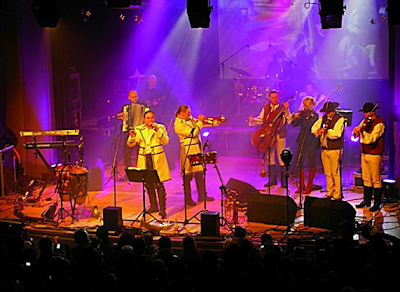 Apparently, the Golec brothers have become very hot stuff. In an address given at Warsaw University, President George W. Bush mentioned one of the group's songs, saying: "Today's own Poland's orchestra called Golec's, is telling the world, "On that wheatfield, I'm gonna build my San Francisco; over that molehill, I'm gonna build my bank."

I found this video on YouTube of the Golec uOrkiestra preforming in 2009 at the opening of a European Youth Olympics in Finland. It's a fun video, and a great taste of what they sound like.

So, are Paweł and Łukasz Golec my cousins? Are we related? 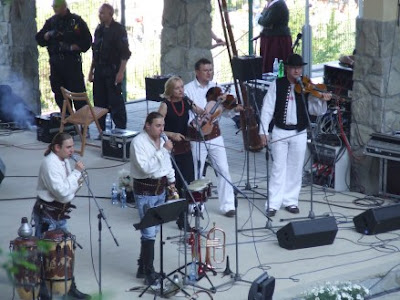 They've apparently played in the USA - in Chicago (of course).

Wonder if they'll ever make it to Los Angeles?

Or, if I'll make it to Żywiec?

As I shared in a previous post last June, I'm so grateful for the decision my great-grandparents made to come to America.

I also wonder how the decisions and choices I'm making now will affect my great-grandchildren one hundred years from now.

Meanwhile, here's a shout out - a "Cześć" - to my cousins (Golec and otherwise) back in Żywiec.

Hello!
My grandfather arrived at Ellis Island June 1910. The ship that he and his older brother traveled on was the Deutschland.

My grandfather was Wladislaw Golec on the ships manifest that I have a copy of (from the Ellis Island Project). He later changed it to Walter Goletz and lived his whole life in Harvey, Illinois. He also had a tavern of which I have several nice pictures of him standing in front of it with our family. Part of the sign had neon lights so I'm sure that that was a nice thing at that time!
My grandparents lived above the tavern. My mother's grandmother, Pearl or Pelagia in Polish, took care of my mother, aunts and uncle while my grandparents ran the business below.
Well, this is a start. I hope you still read this as I see its over 5 years ago that you posted this. I've much more information and I'd love to see how we may be related. If nothing more, it'd be great to hear of your stories as I have just a few of our family history on my mother's side.